“Back on Track”: How an Idea Evolves

The winners of the 2015 SAP Gründerwerkstatt, a workshop for startup entrepreneurs, were recently invited to the SAP AppHaus in Heidelberg for an interview. Their “Back on Track” project had just garnered another accolade in winning the Google Impact Challenge, which followed a second-place finish in ECHT GUT!, an award the German state of Baden-Württemberg confers on those engaged in outstanding volunteer work.

I wanted to find out how the team’s success in the SAP workshop helped them advance their initiative, where they stand today, and what they’re planning for the future. Joining me were former and current project leads Katharina Küpfer and Gabriel Moscovici. To learn more about the business partners of tomorrow, simply read on! 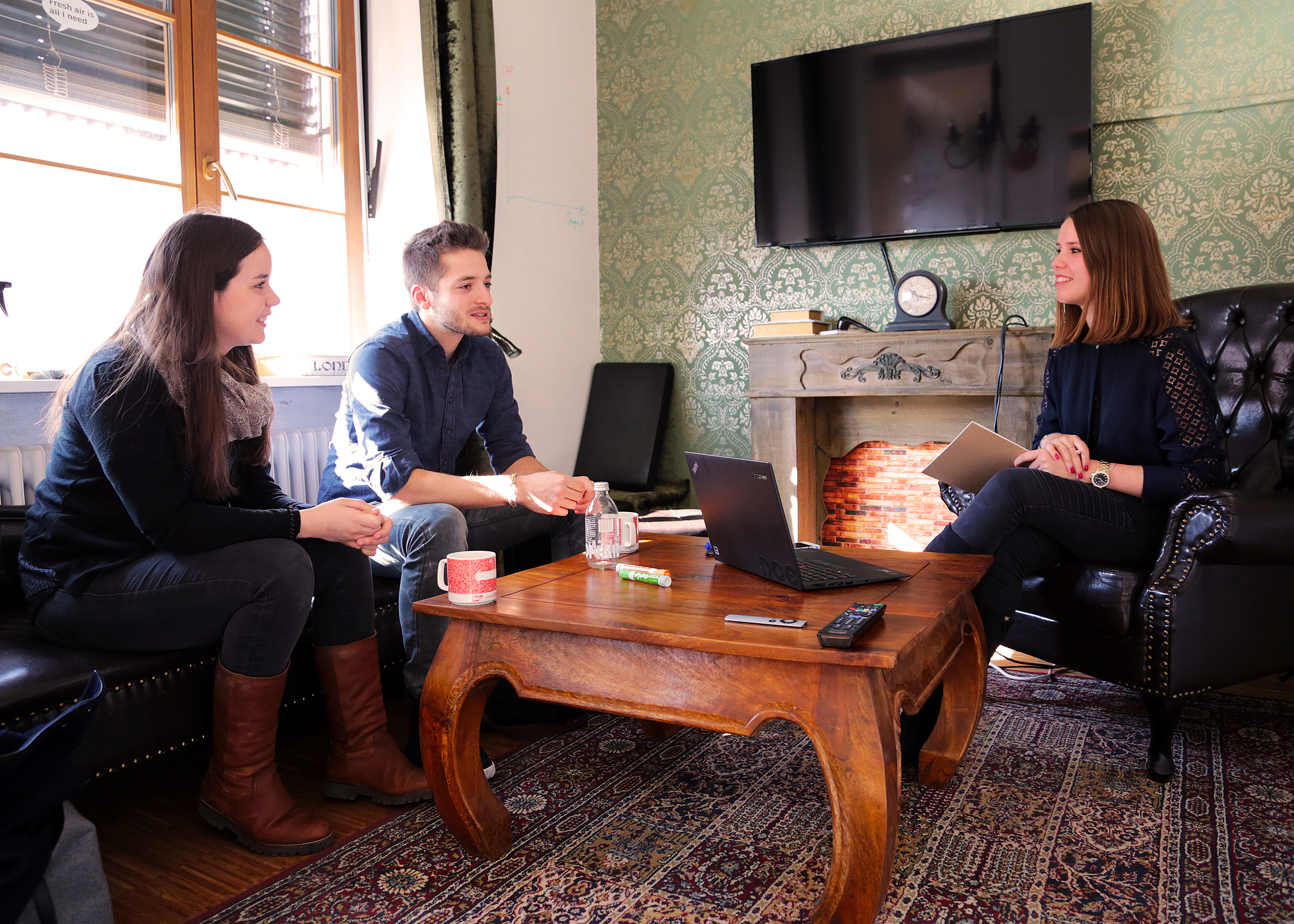 If you had to describe the “Back on Track” concept in three sentences, what would they be?

Gabriel: “Back on Track” is a socially minded business project in which the student initiative Enactus Mannheim e.V. is attempting to help those who have spent time in prison reintegrate into society. It’s based on an innovative food service concept: Former convicts are going to sell healthy eats at a food truck we plan to park at locations in and around Mannheim.

Katharina: In the process, we’re focusing on the trend toward vegetarian and vegan food. Our conscious decision to forgo meat also means we won’t have to deal with any refrigeration issues, which makes our service environmentally friendly, as well.

How did you come up with the idea to have ex-convicts sell vegetarian and vegan food?

Katharina: For one thing, visiting the correctional facility in Mannheim and seeing how important the topic of nutrition was at the meetings made us want to approach the subject of prisoner rehabilitation through food. The inmates in the resettlement wing cooked for us every time, for example. The food service sector in particular enables us to incorporate many of the skills ex-convicts have without requiring any special prior knowledge.

Gabriel: As far as offering only vegetarian and vegan food goes, that’s a result of our initiative’s mission to ensure that our actions don’t harm the environment. Plus, it’s much healthier than “traditional” fast food, and it’s riding a wave of popularity at the moment. From our perspective, the idea checks a lot of important boxes.

What motivates you to help ex-convicts in particular to start a new life?

Gabriel: People who have spent time in prison need support because they’re often written off by society. That’s a problem for both ex-convicts themselves and society in general. In particular, finding one’s way back into a daily work routine can dramatically decrease the probability of recidivism. That’s why we started thinking about long-term assistance that could help former prisoners get back on their feet following their release. Creating jobs can reduce crime, which obviously benefits society as a whole.

Katharina: One thing you really notice in the process is that we aren’t usually dealing with hardened criminals at all, but with people who have made some mistakes at some point in their lives. Statistics show that most convicts are in jail for less than a year.

Do you have any plans to expand beyond Mannheim, or do you think it’s important to keep your focus local?

Katharina: Our goal is to have the truck serve locations in the greater Mannheim area. Since it’s going to be working with a food service company based in the city, the logistics alone will limit the project to Mannheim and the surrounding region.

Gabriel: There’s also the fact that the ex-convicts are required to stay within a certain distance of the city’s correctional facility. If and when the concept bears fruit, it can spread throughout Germany, of course.

Can you tell me a little about everything that’s happened since you won the 2015 founders’ workshop at the SAP AppHaus inHeidelberg, and where things stand today?

Katharina: We found the workshop really interesting because it was a chance to work on our project with a lot of people who weren’t affiliated with it. All of our team members were already very familiar with the idea as a result of being so closely connected to the project. Meanwhile, the methodology behind design thinking gave us some new insights into the endeavor. The interviews we conducted revealed that most people are more than open to our idea; in fact, they’d actually prefer supporting our food truck to the other options available during their lunch breaks. That realization was really helpful. We’d just been turned down by a potential partner at the time, so winning the workshop gave us the motivation we needed to stick with the idea. It was the first time we’d received a positive response to the idea from a source outside of the project. 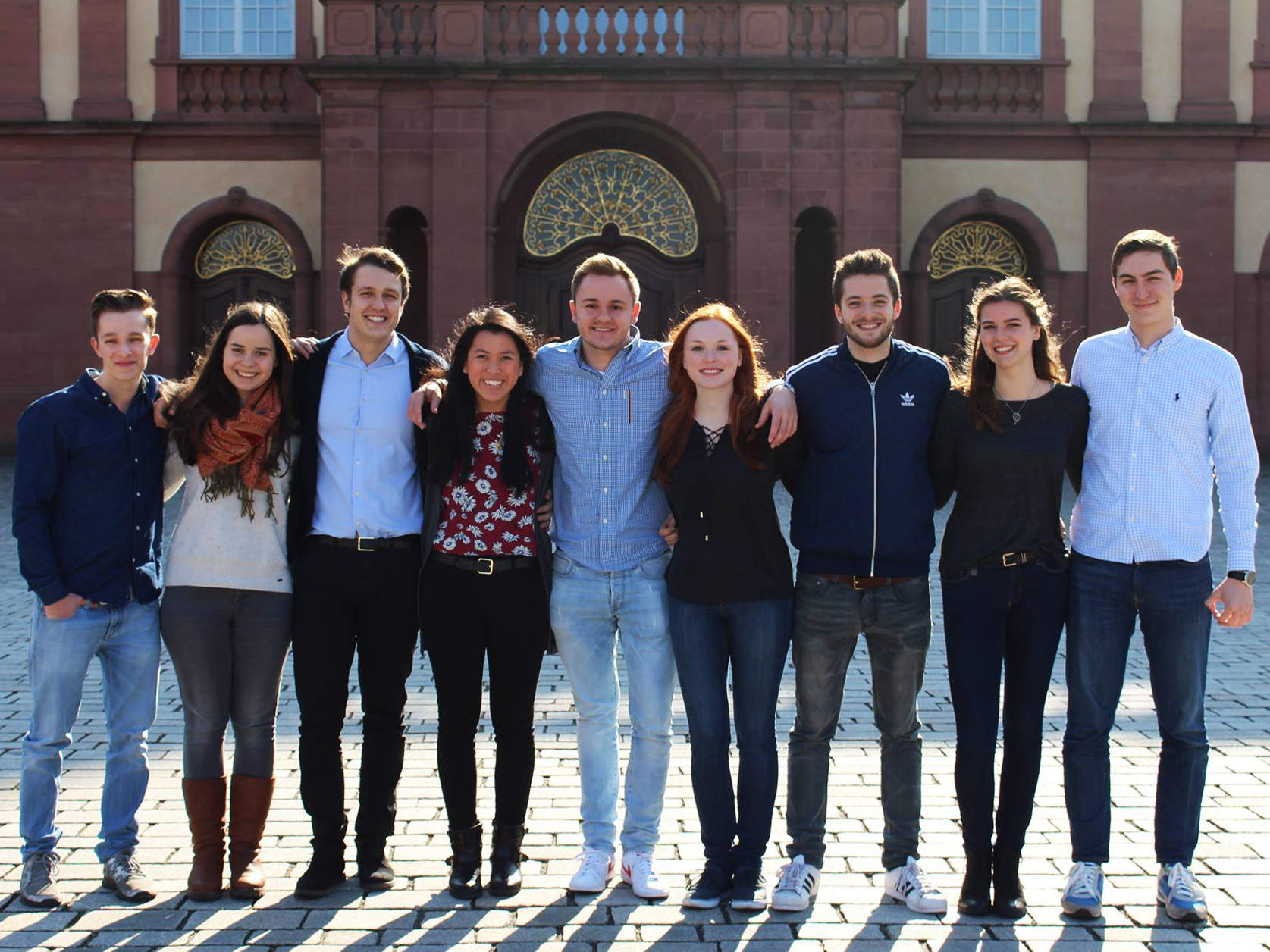 Did your idea progress further or undergo any kind of evolution following the workshop?

Katharina: The basic idea behind our project hasn’t changed, but our approach to the steps ahead definitely has. Since the workshop, for example, we’ve started projecting a different image. Through the coaching we won in Berlin with Norbert Kunz, who’s a Ashoka fellow and the CEO of Social Impact, we learned how to improve our pitch to catering companies and other target groups to get more people on board.

Gabriel: Winning the SAP workshop in 2015 also sort of proved that we belonged at other competitions – both to others and to ourselves. The name SAP lends us an air of professionalism, as well.

Meanwhile, you were also just named one of the winners of the Google Impact Challenge. What doors do you think this opportunity will open?

Gabriel: That was definitely another big win for us, and a €10,000 prize is a great place to start. We’ll need more sponsors before we can actually get our food truck rolling, though. We’re already accepting orders from companies that are looking for alternatives to cafeteria fare. In Germany, however, food trucks aren’t allowed to set up in public places without a license; on private property, we’ll always need approval from the respective owner. That means we’ll be happy to pay a visit to companies that invite our food truck over to dish up some healthy and delicious food.

What’s your secret to a successful pitch?

Katharina: More than anything else, the key to a good pitch is boiling your idea down to a clearly worded summary. It’s not always easy, but it’s something you get better at with practice. That’s why we were among those who took the design thinking component of the SAP founders’ workshop as a valuable challenge. We learned that you first have to focus on the core elements of your project and put them in a logical order.

Gabriel: My tip is in the same vein, and it has to do with the importance of thorough preparation. From the very beginning, you also have to show your target audience what your project can do, as well as what you’re not trying to do.

If you had to share your experiences with other entrepreneurs, what advice would you give them?

Katharina: My own experience has shown that starting your search for sponsors early on is absolutely crucial. Initiatives like ours don’t usually have much startup capital, but those looking to found a socially minded company have a lot of opportunities to acquire funding through competitions. I’d recommend that path to anyone.

Gabriel: Generally speaking, I also think sponsorship is important, but when you’re talking about larger amounts, I’d advise entrepreneurs to start by figuring out how likely they are to land a cooperation with their partner of choice. Here, it’s a good idea to factor in more than just the organizations you find favorable. From the very beginning, you have to try to determine whether your potential partner can actually provide the support you need. And don’t be inclined to sugarcoat the numbers – that just wastes time and won’t get you anywhere in the end.

Are you working on this idea alongside your studies, or is the initiative a full-time job? How much have your chosen subjects helped you contribute to the “Back on Track” project?

Katharina: We’re all full-time students at the University of Mannheim. In the broadest sense, we all have something to do with business, whether through our majors or minors. The project gives us the chance both to apply what we’ve learned and gain further knowledge in the process.

Gabriel: In another setting, I recently told someone, “We’re still studying on the side, after all.” Then I realized that it’s supposed to be the other way around. Either way, each one of us puts a lot of time into this project on top of our study commitments.

Katharina: Our initiative is really well organized in terms of its member structure, which enables us to divide up the tasks at hand. Since we’re all committed to this project, we’re always motivated to take the next steps. Besides our own weekly meetings, we also sit down with people from the food service industry and the Mannheim correctional facility.

I’d like to thank you two for this interview and wish you continued success in seeing through the idea behind “Back on Track”.

Katharina: Thank you! We hope the project broadens our horizons, as well.

As I learned through this conversation, the Enactus Mannheim initiative is happy to work with all kinds of sponsors and supporters. In particular, it’s also looking for customers interested in receiving deliveries from its food truck. Anyone looking to shake up their usual cafeteria routine or help this project get off the ground should feel free to contact gabriel.moscovici@unimannheim.enactus.de .

For more information about the Back on Track project, please visit: unimannheim.enactus.de/blog/projekte/back-on-track/.