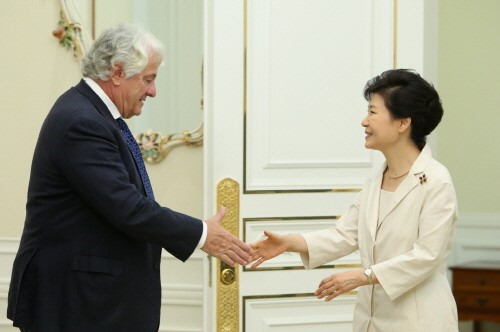 In September 2014, SAP Chairman Hasso Plattner met with President Park Keun-hye of Republic of Korea and promised to help to advance the creative economy in Korea with Design Thinking and SAP HANA. 18 months have passed, and on 22 March 2016, the newly established SAP Design & Co-Innovation Center (DCC) APJ team had the privilege of hosting President Park at the new SAP AppHaus which is currently in the process of creating.

The visit was part of the Opening Ceremony of the Startup Campus building complex where the AppHaus is located. The campus building sits at the hub of ICT valley, Pangyo. It is designed to nurture more than 200 startups, offering workspace and consulting services for capital funding and other branches. As being one of the tenants of the leading global companies, the SAP AppHaus will play a significant role to bring the impact of Design Thinking to the local startup ecosystem, companies, government and universities. In the opening speech of the campus, President Park called out SAP as a company making a valuable contribution to the creative economy and helping local startups go global by leveraging Design Thinking, the power of SAP HANA and SAP’s Start-up Focus program. 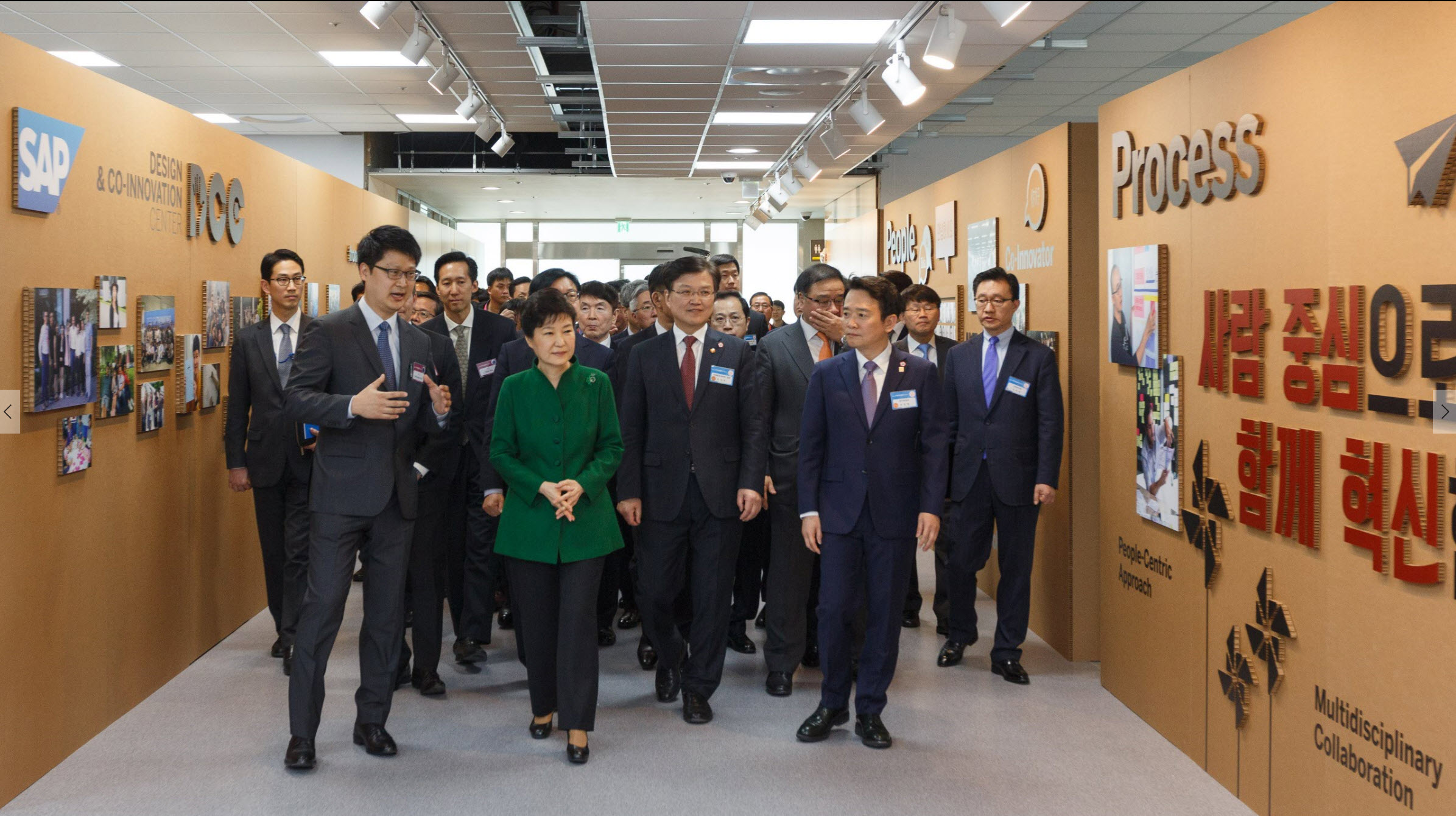 During the President’s visit we introduced SAP’s approach to innovation culture, namely people, process and space. “The SAP AppHaus in Korea will be part of a global network of other AppHaus spaces like in Heidelberg and Palo Alto”, explained Christopher Han, VP of DCC APJ. President Park specifically thanked Chairman Hasso Plattner for keeping his promise to build the SAP AppHaus advancing the creative economy in Korea. 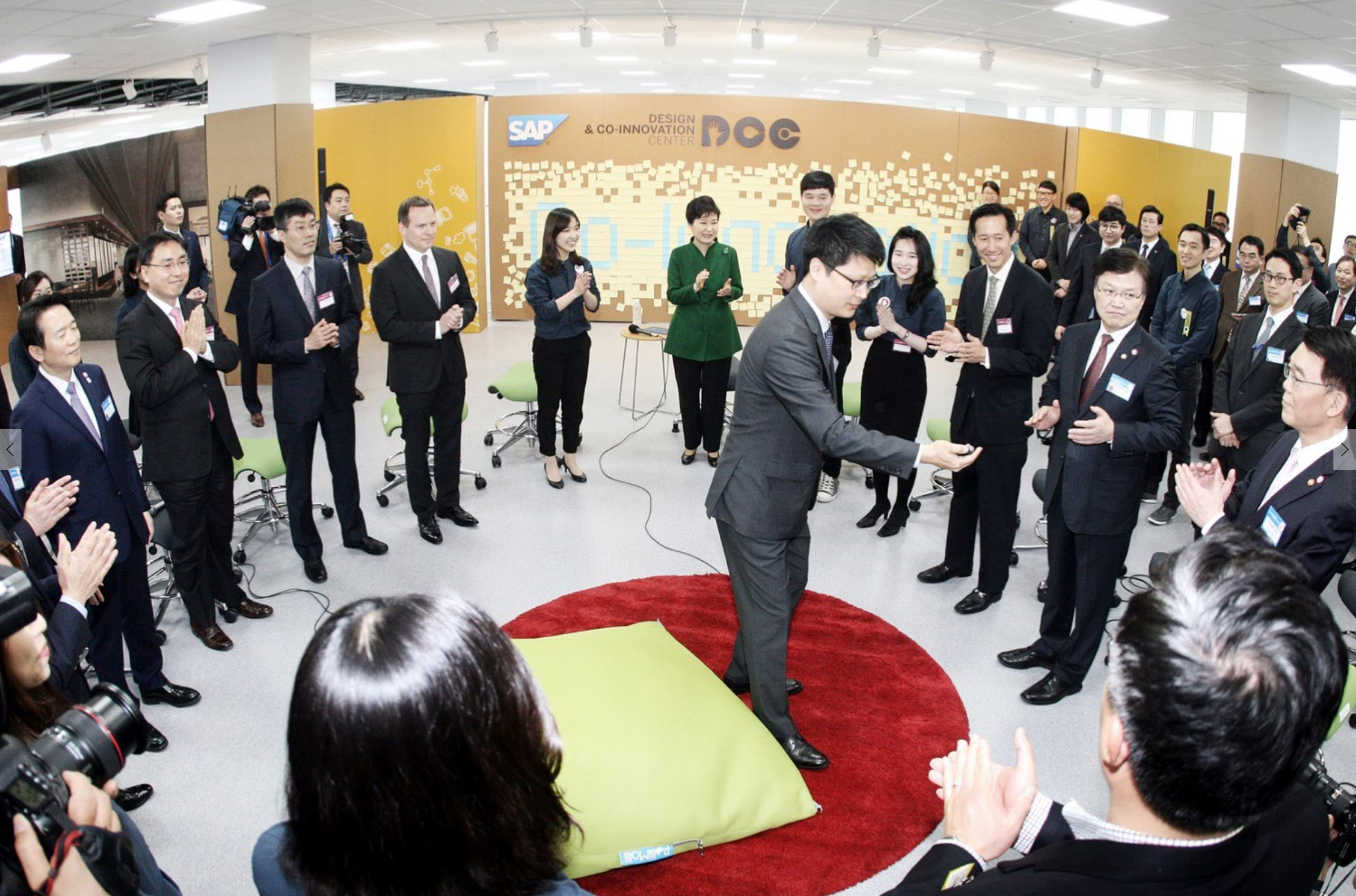 During the introduction, we started with a warm-up game, just like we do in any other Design Thinking workshop to reenergize and warm-up the mind. It was really fun. Surprisingly, President Park was one of the most active participants. She agreed that we need to collaborate even when we do small exercises like these.

We presented two successful projects: A new “IoT solution to monitor feeding of milk cows using HCP and Fiori” and the “Design Thinking Tour with SAP”. Two partners explained about their experience with design thinking and the big value this approach brought for their solution. Marie Kim from DCC also shared her story from being a student participant in the Design Thinking Tour to becoming an innovation consultant at SAP. 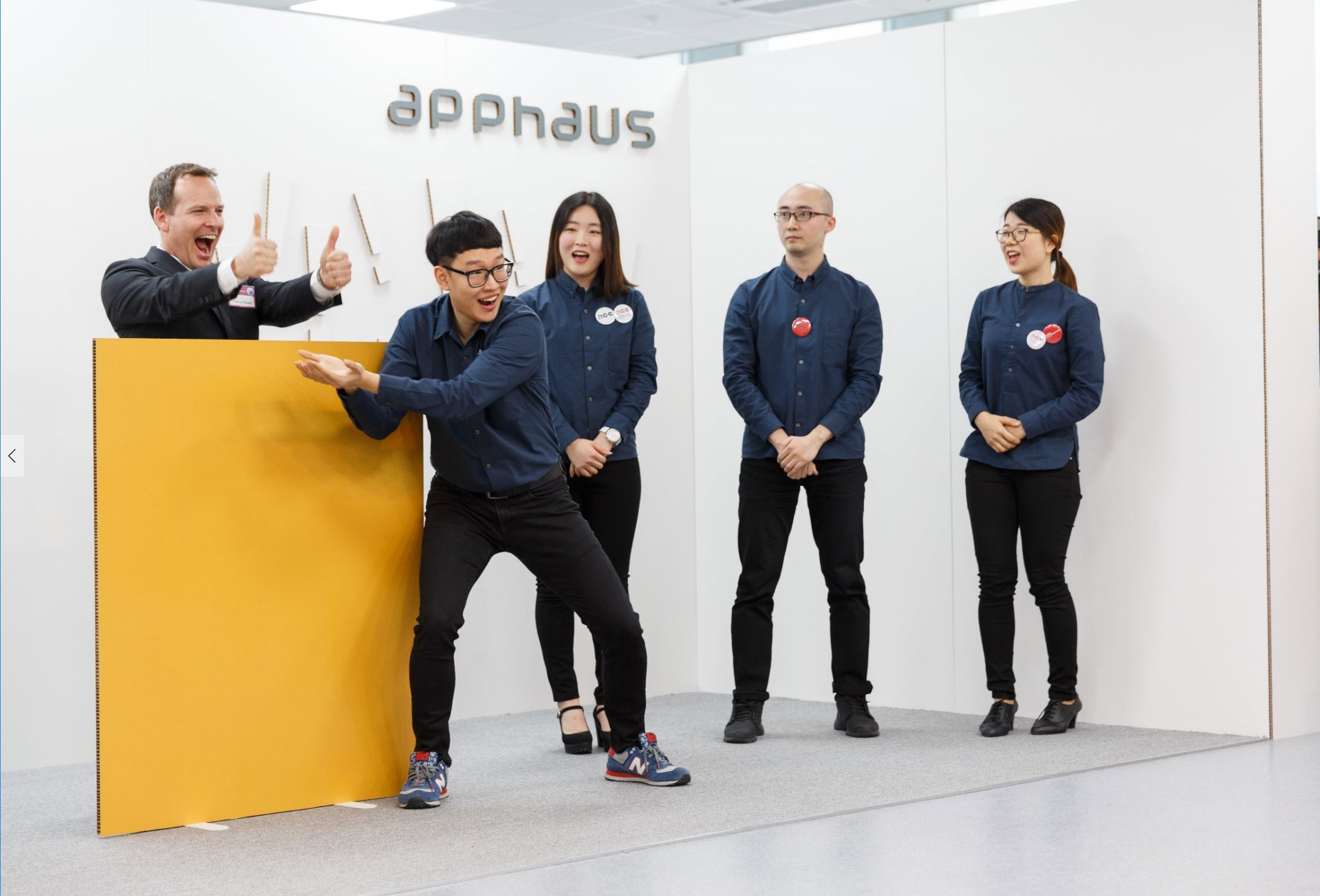 The finale and the highlight of the visit was marked by a live performance of our members on the topic of “the New Way of Working” which successfully showed the Design Thinking approach versus the habits of typical waterfall-driven organization. This playful insight into people-centered innovation culture was well received. After the performance, President Park remarked, “you’ve communicated through the performance exactly what I wanted to say about working culture.”

When the team asked me to join the performance, I hesitated for a few seconds. However, they explained to me that that they wanted to show the lack of hierarchies in our team, and show how we perform as ONE team. With this explanation my decision was clear: “I am all in!”. I really enjoyed it. How often do you get the chance to perform in front of a president? Check out the video. 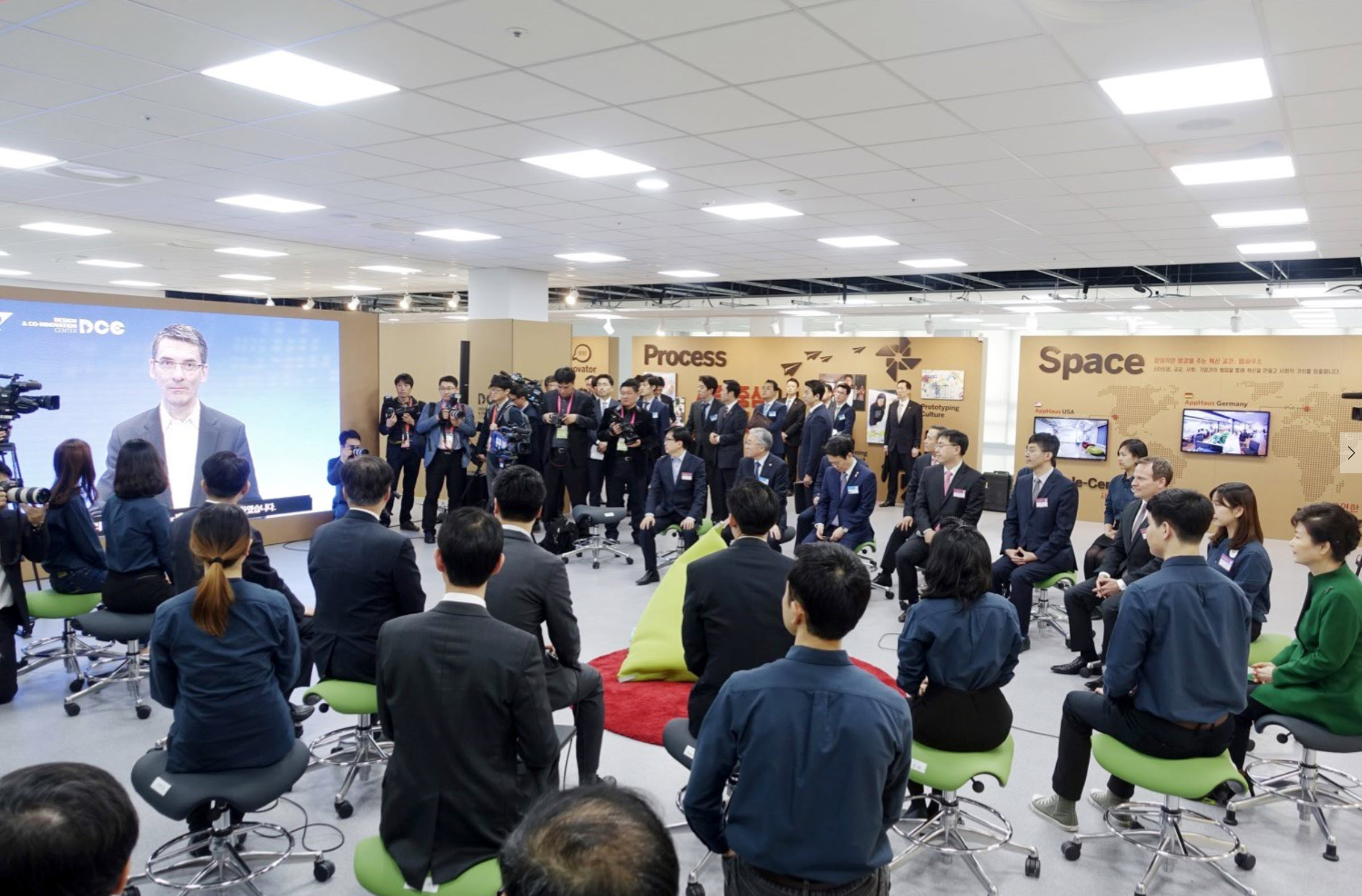 Every member felt excited that President Park enjoyed the time with us. She clearly understood the message that the SAP is capable of helping to foster a design-led innovation culture and create new innovations with customers, no matter if they are companies, government, startups, or students. Moreover, the media coverage about SAP and the newly established AppHaus in Seoul was overwhelming: there were over 125+ press articles published within just one day and we were 2 minutes on TV. 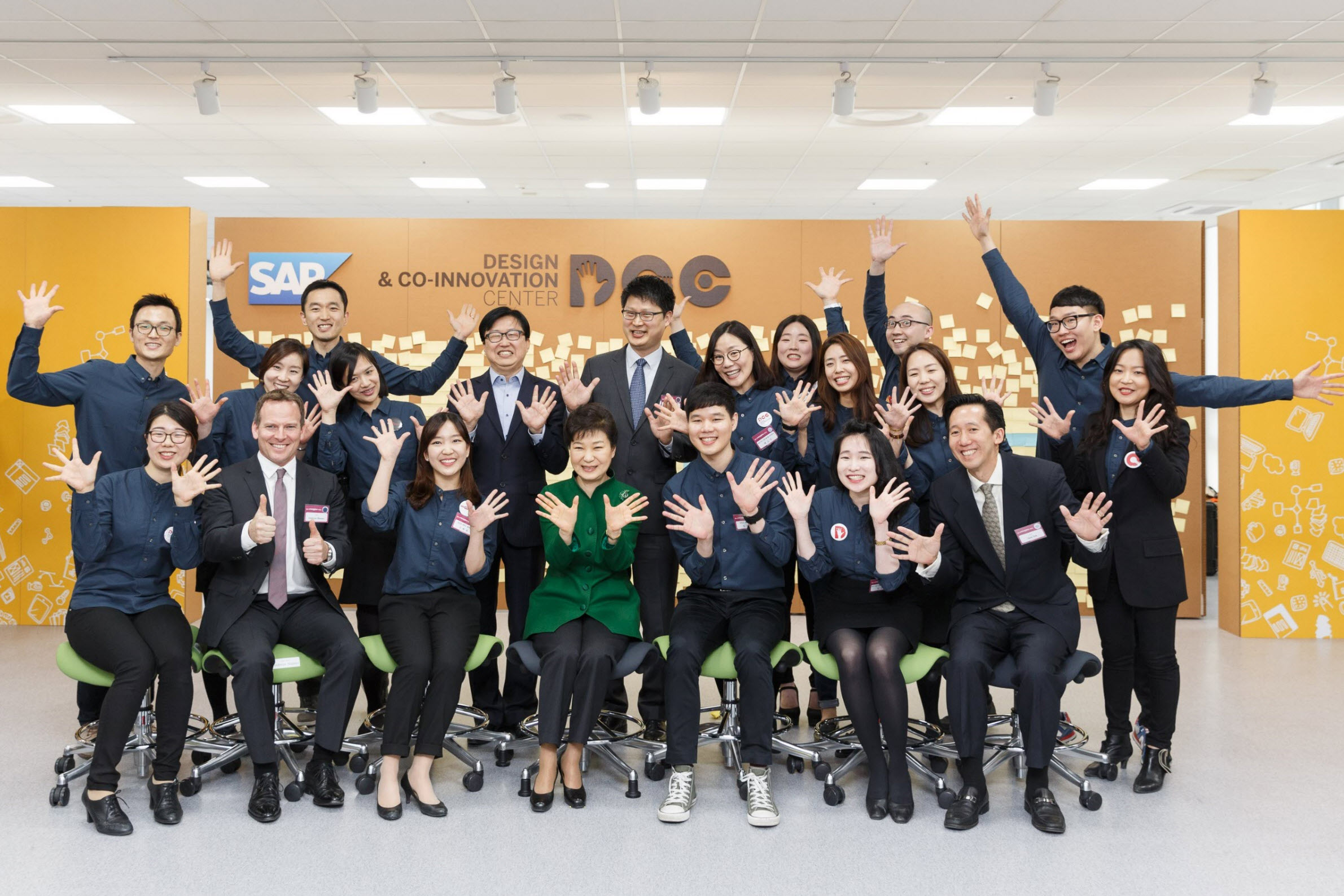 The team did an amazing job. They worked very hard to make the visit a successful event: designing the program and space, writing scripts, acting, and communicating with the government officials. Everyone in the team, including our friends and family members, was involved in the many cycles of iterations and feedback rounds. “From defining the concept to implementing the designed program, we have embodied the principle of design thinking,” recalls Esther Lee, Senior UX Designer at DCC, who led the program of the visit. 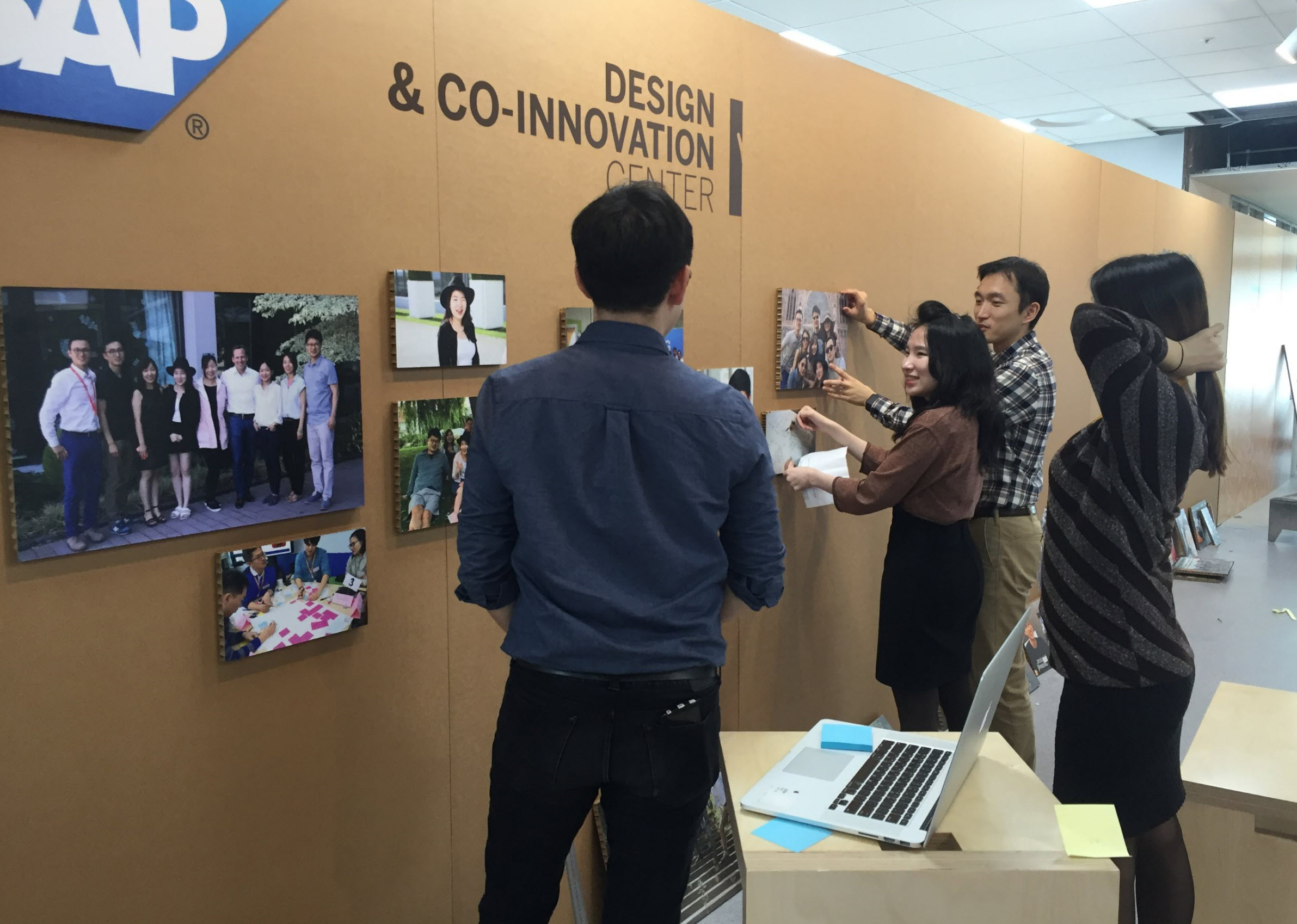 Needless to say, it’s been an exciting and busy month preparing for the event, but this is just the beginning. The SAP AppHaus in Korea is underway and we expect the space to be open to customers towards the end of May. Stay tuned for updates on our Facebook, Linkedin, and Twitter pages as well as on our Homepage.