Mixing 100 Students, Dataspecialists and experts from Volkswagen and SAP for the World biggest IT Fair?

A collaboration between SAP and  VOLKSWAGEN INNOJAM ++ AT CEBIT 2016 . The theme was Developing Prototypes for the Mobility of the Future and IoT, or rather the internet of (moving) things. 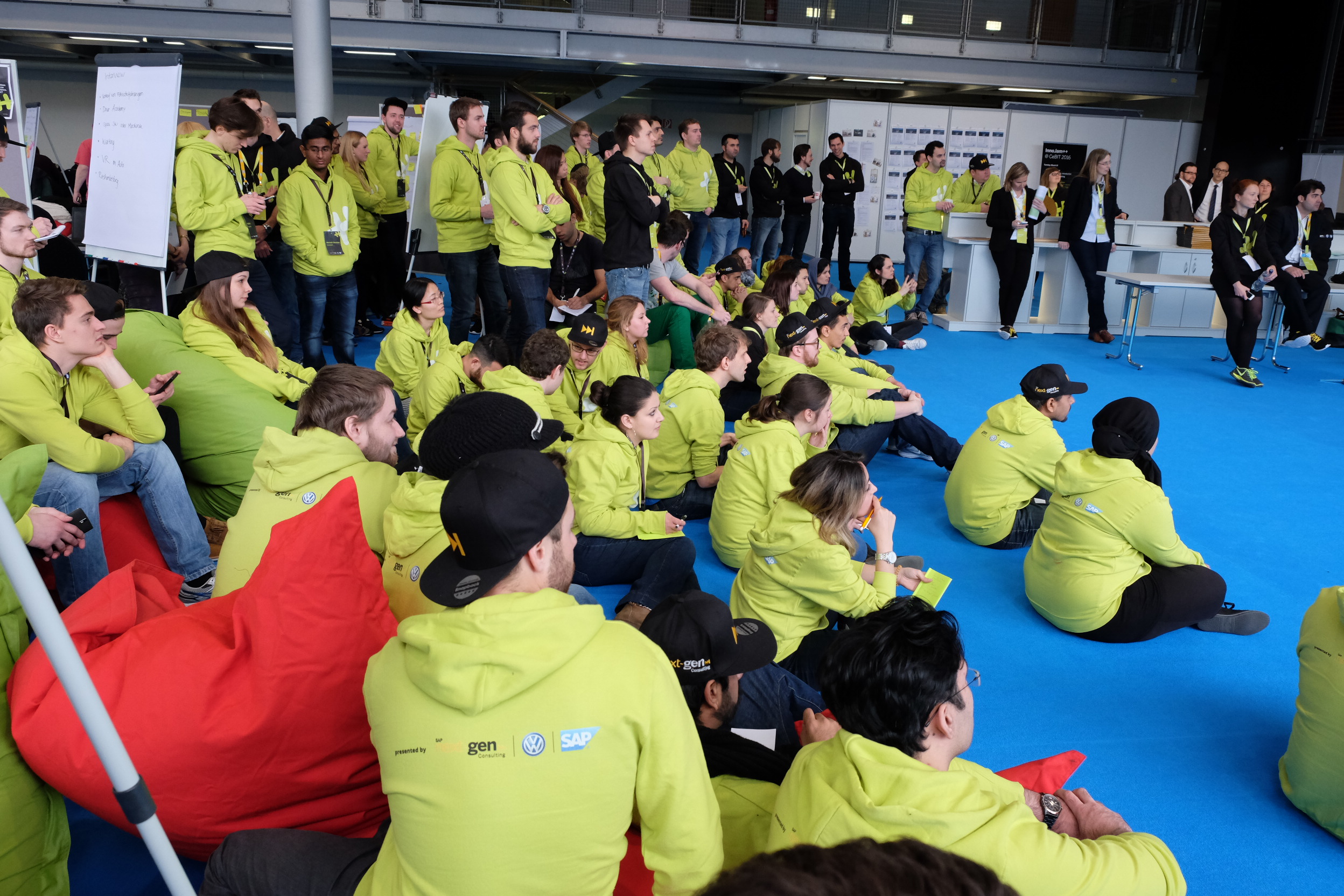 Nearly  100 students from 16 countries meet to develop and realise their visions for future mobility.The students stayed on the premisses of the CeBIT and they worked for 30 hours on challenges related to “Mobility of the Future and IoT” at InnoJam ++.  The goal was to come up with and acually realise ideas by using our  SAP HANA Cloud Platform and SAP Vehicle Insights. We had access to the anonymised data of the SAP fleet, or in other words the information on the behaviour of Waldorf colleagues and how they use their vehicles.

The students resided  or dwelled – depending on your perspective and duration- in a giant glass cube next to SCALE11. The hall SCALE11 allowed Start-up Companies to present their products, to pitch for investors, and to network. Thanks to the generous in-kind contribution by Red Bull most students managed to code for these 30 hours non stop. 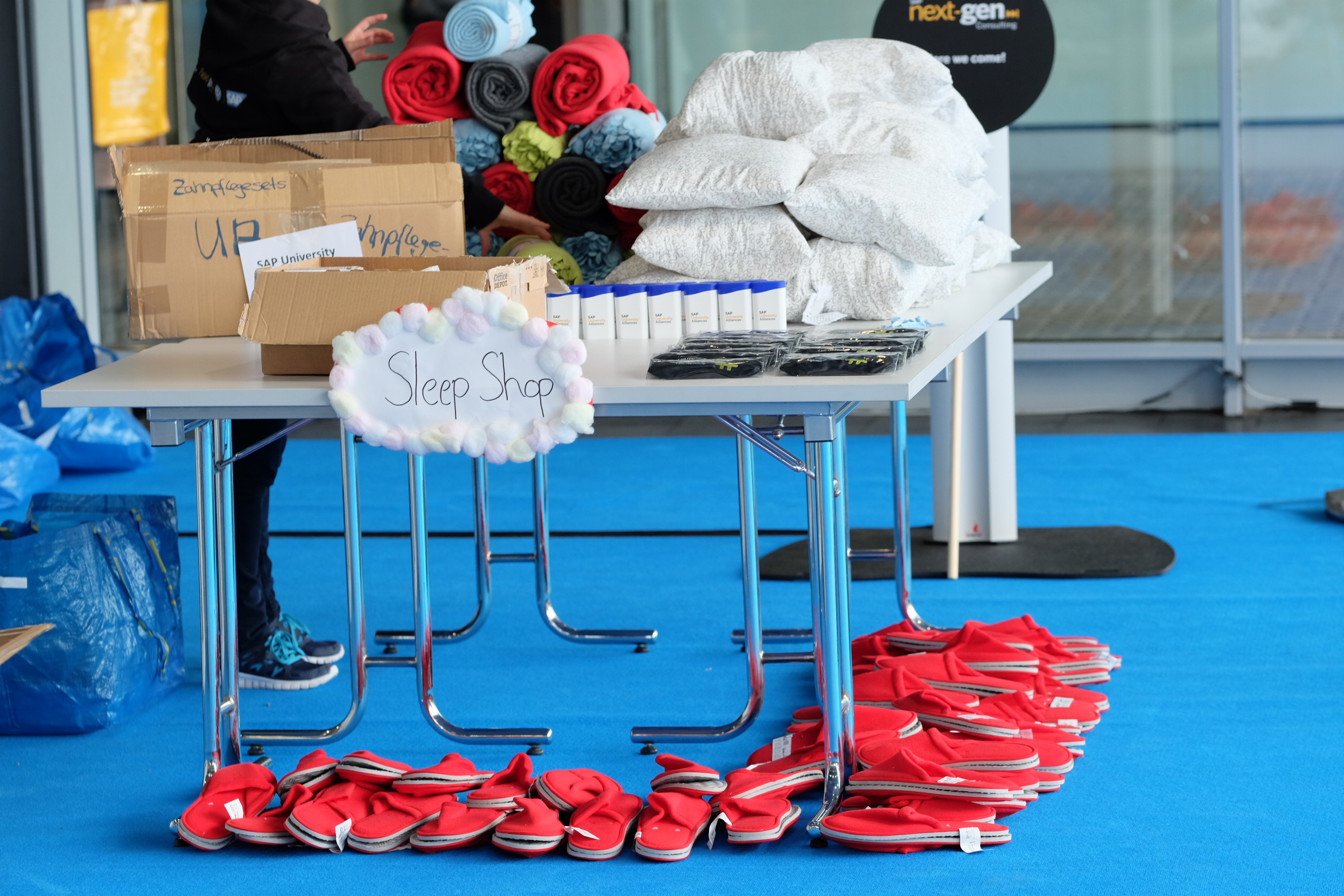 Our SAP executive sponsors of the event were Bernd Leukert and Jürgen Müller. The Vehicle Insights team provided technological and motivational support for the students. University Alliances were a driving for force organizing the event and in bringing together the Design Thinking Coaches. Most people don’t not know Volkswagen has its own data lab in Munich – one more reason for  their data scientist were among other Volkswagen people to support the students.

The event started on Tuesday morning with a Design Thinking phase followed by the TECHFIRE phase of coding. Time keeping for all groups was of paramount concern, and coordinated centrally by analog means: 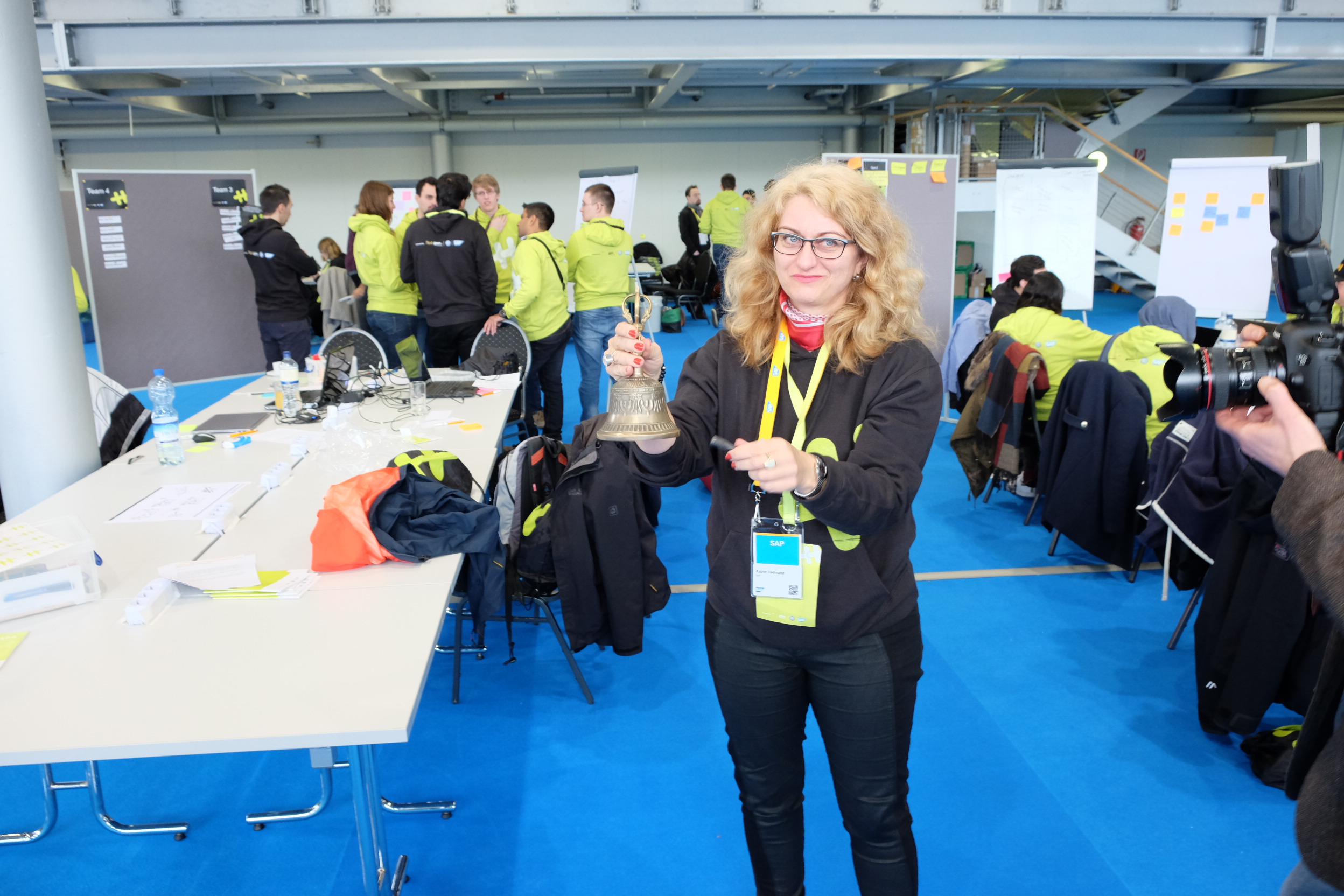 On Tuesday midday in between these two phases a high level panel discussed “The digital transformation is here – also in the German Automotive Industry”. It revealed how much the business model of the car industry has to change, it discussed the role data science needs to play, and explained innovation patterns for the Internet of Moving Things. The VW data lab grants each idea by default 3 month to demonstrate both its viability and relevance, which is in the DT spirit of “fail often, fail early”.

As a refresher here are the principles of DT:

As a Design Thinking Coach from Product Support in Hungary I directly supported two teams, both working on the question “How can we support the mobility of the future”: 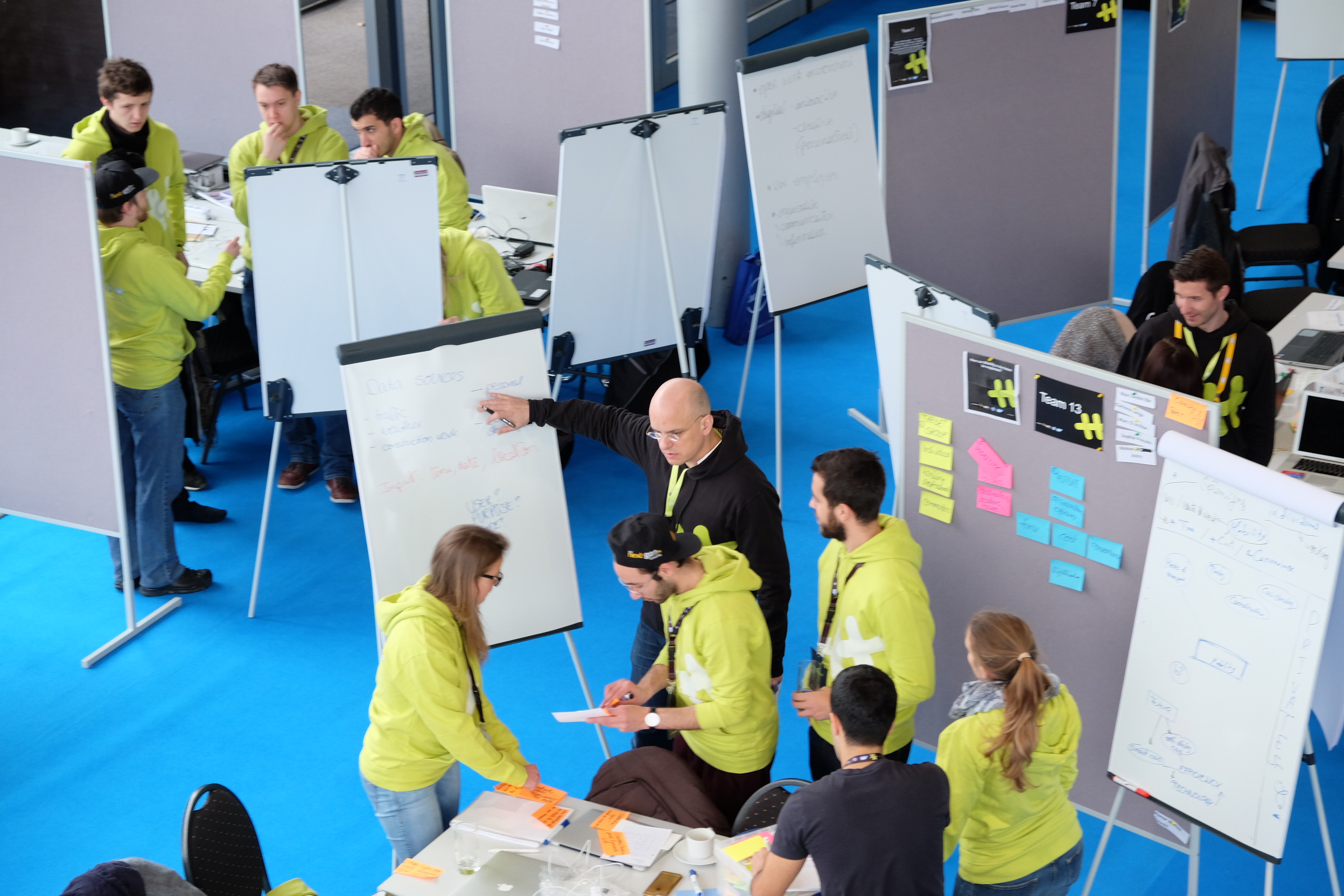 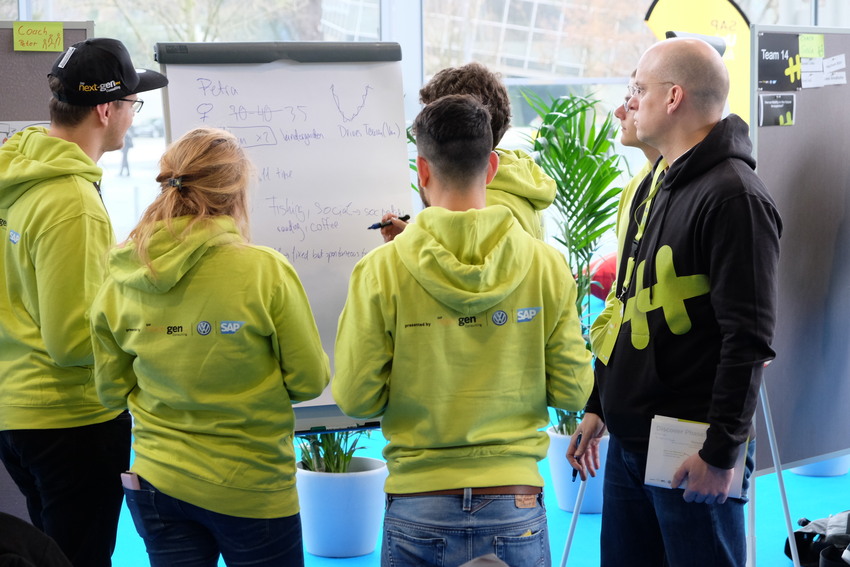 The Team ‘Pendler’ used data-mining and predictive tool to find the best way around for SAP employess. They targeted one single idea and delivered smoothly in their working smart app.

Team ‘Estia’ – named after the greek godess- combined several ideas on optimizing the time spend commuting and using sensors in the IoT e.g. self-scheduling phone calls according to time and household chores.

30 hours to design and realize an idea, and eventually still get some sleep? That is a dense program leaving not much time for an extensive design thinking phase. The process was structured in the three phases of Discover, Design, Deliver. All this was cramped- or let say compressed, which it sounds better- into the Tuesday morning from 9 till 1400. In the deliver phase the teams used interviews to create a persona, build their User Experience Journey and formulated a HOW Might We Question. Most of the students did not  commute by car regularly, but had a rather urban lifestyle relying on public transport and friends or ÜBER to get around the city. By interviewing the experts from VW and SAP along with by-passing visitors of the fair the students got an insight in a different lifestyle.

Team “estia” came up with the persona PETRA, “an ordinary SAP employee, like our Coach,” but “just with more hair”. Her challenge was to

juggle family obligations and numerous job-related deadlines and appointments. Design Thinking is based on HOW MIGHT WE HELP (PERSONA) TO DO X

estia wanted  “How (they) might help PETRA to combine her private life with professional life while driving through an area without complete cell phone coverage.” The team was unexperienced in DT, yet highly ethusiastic. Their initial idea of a scheduler for private and professional phone-calls according to the planned duration of the trip, expanded more and more. My challenge as a Design Thinking Coach was  how much to intervene, and how to bring them back to concentrate on one idea for one problem. For the phase  “ideation” and initial phase of  “prototyping” the team needed some kickstarting. The idea morphed into an jack-of-all trades device, but as the saying goes: master of none. Or for the Bavarian speaking reader:” A Eierlegende Wollmilchsau”, a Swiss army knife that tried to solve many issues with even more sollutions:
One insight from our greek student was that actually the quality of petrol varies from station to station. A sensor should compare the quality of the petrol. Additionally several IOT ideas regarding shopping were added during the coding period at night and after the testing. PETRA’s User Experience journey map, was later digitalized and used for the final presentation. I really enjoyed the enthusiasm of the team, their coding skills, and coaching this team work.

All members of my second team were familiar with Design Thinking from their Universities or from previous Hackathons. The students used DT tools independently. As a Design Thinking coach I exercised pressure on them to keep the pace. One lesson learned from the event for me is how difficult it is to accelerate the DT process without intervening or distorting it. This was a learning opportunity for self-development, I see points where I could improve for future events. Initially they came up with the idea to “gamify” a shared driving app, which actually already exist for SAP. Interviewing in particular colleagues from SAP, they discovered that road conditions are changing on a daily basis. And how this caused personal and profession hardship for their persona, ANJA their persona, both a new hire and new  driver reflecting the urban, non car-centric lifestlye of the team. After scrutinizing the actual data provided by SAP, the team decided to concentrated on optimizing the routes based on previous drives, using public and internal data for predictive suggestions of optimized routes. The team consisted of two girls and three guys.
The guys already were very savvy with SAP technology and creating apps. The girls did an excellent job in creating a corporate ID, including a distinct logo for ‘Pendler’. I prepared them as well for the presentation. To convince the jury that they had devised an excellent and working APP with a backend was not enough. It was key that they highlighted the used technology, by SAP of course. Mere name dropping is not sufficient, but explaining which benefits a particular technology has, and why they use it. 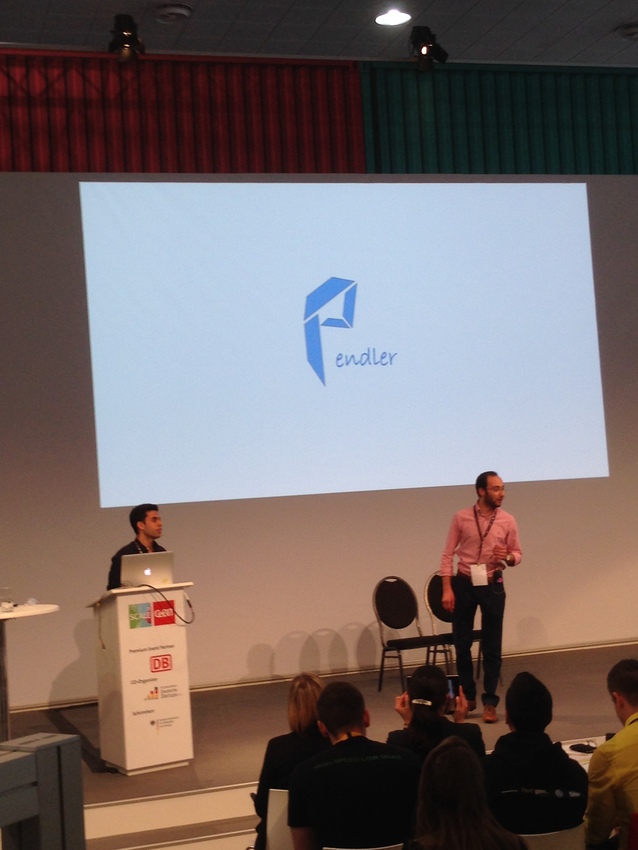 Together we translated their general and vague goal of supporting “sustainability” into benefits for local spatial planning, urbanism, lower cost,  and higher quality of life for the user. A lot of nudging was actually necessary to discover together benefits for VW together, e.g. increased brand loyalty, anonymized data, and a digital platform for further non-invasive digital services. After the first presentation, ‘Pendler’ changed their presentation completely and addressed additional benefits. Successfully Volkswagen awarded team ‘Pendler’  a special prize for their HCP based smart commuting app. Lessons learned here for future participants, being prepared to use the technology provided previously before arriving is a key. Yet do not underestimate the importance of clear arguments to sell your idea, good presentation, a good coaches, and never ignore the persuading power of a sharply ironed shirt.  A lesson I should take home as well.

The other winning team was a group of students from the University of Karlsruhe, who developed an app for driving schools based on the SAP HANA Cloud Platform.

An additional highlight for me was the Panel Discussion with Bernd Leukert: The digital transformation is here – also in the German Automotive Industry :

The panel discussion was moderated by Bernhard Stobitzer. It was an outspoken and candid discussion, not only a PR event. The German car industry has to face its yet biggest challenge – it has to embrace the digital transformation. Manufacturing excellence it not enough in the 21st century.

The slightly different way of using Design Thinking at an Hackathon for Software creating has been a enlightning a great experience for me, who comes from Product Support. I meet great colleagues from SAP and VW, yet the best thing was the energy and the enthusiams of the students. It is a great experience to contribute to the personal growth of young people, while representing your company. 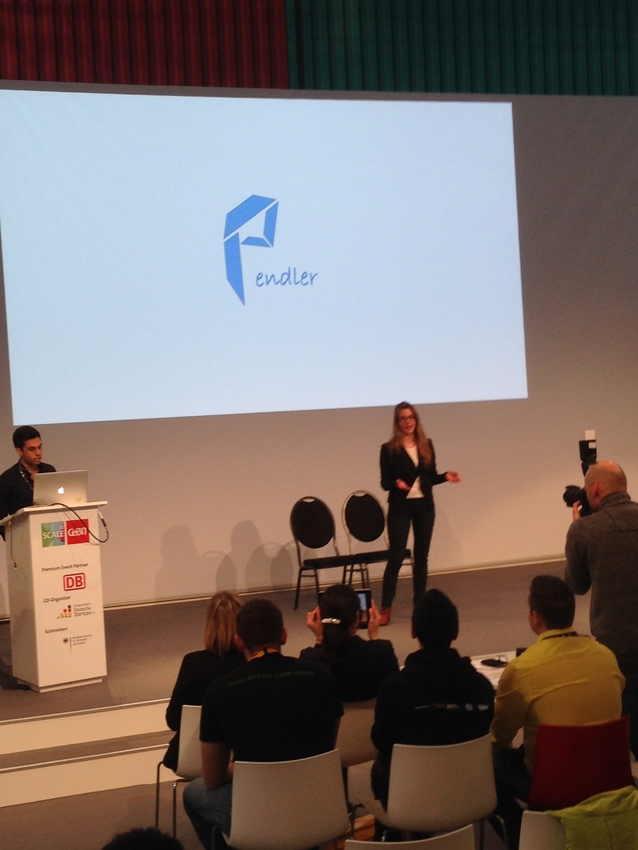 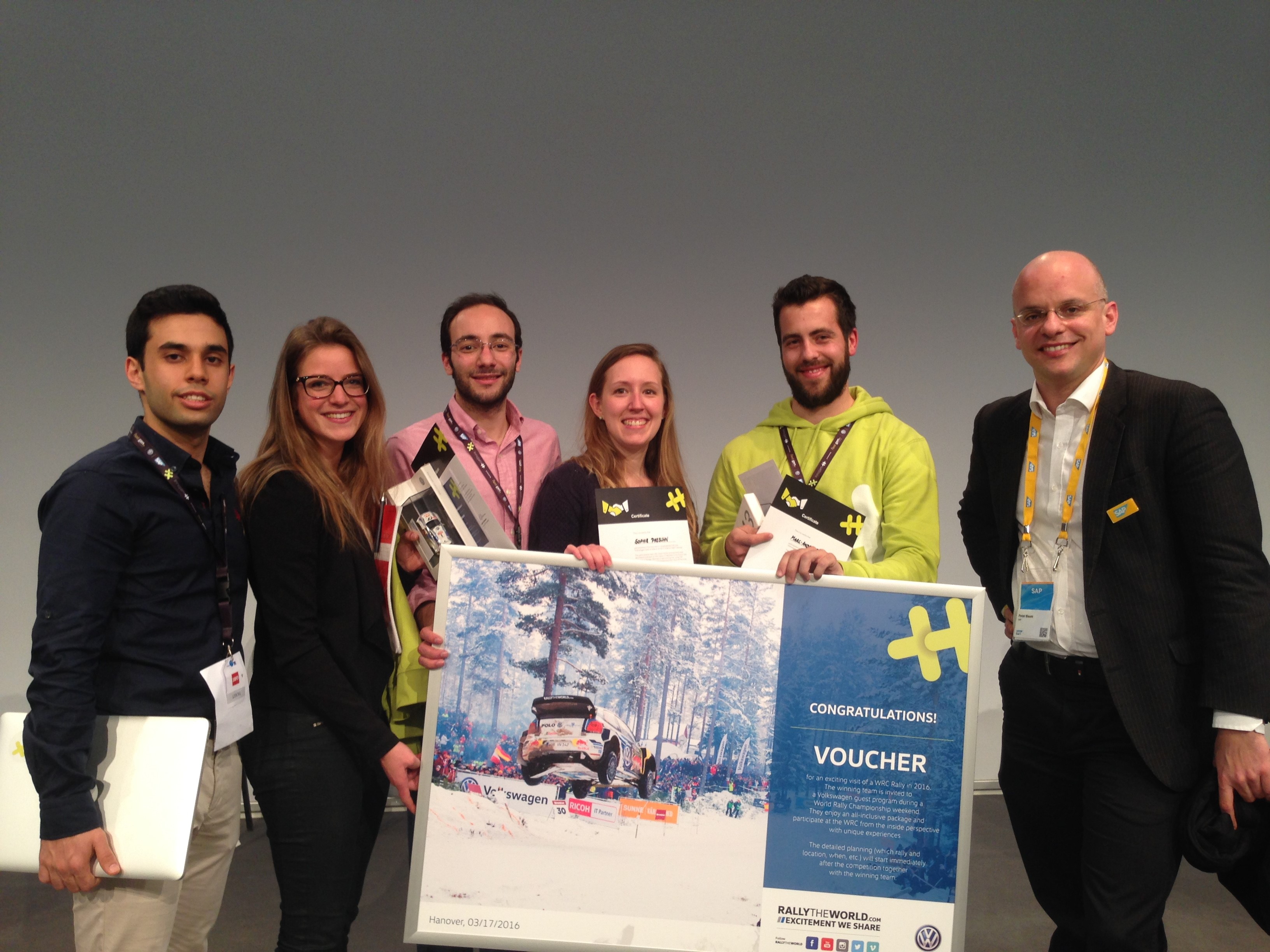