It’s said that, “If you judge a fish on its ability to climb a tree, it will live its whole life believing that it is stupid.”

This quote complements John Elder Robison’s message at the SAP Autism at Work Summit.  Robison is the author of the 2007 memoir, Look Me in the Eye, and is a speaker and strong advocate for people with autism.

The Summit, which took place on March 23-24 at the SAP Newtown Square headquarters, was purposed to encourage and celebrate neurodiversity in the labor force.  The Summit summoned 200+ SAP customers, executives, and influencers all advocating for change and striving to help people with disabilities find employment.

For a recap of the Summit’s first day, read this blog by my colleague, Angela Schuller.

1% of the world’s population is considered to lie on the Autism Spectrum. 80% of those people are unemployed. 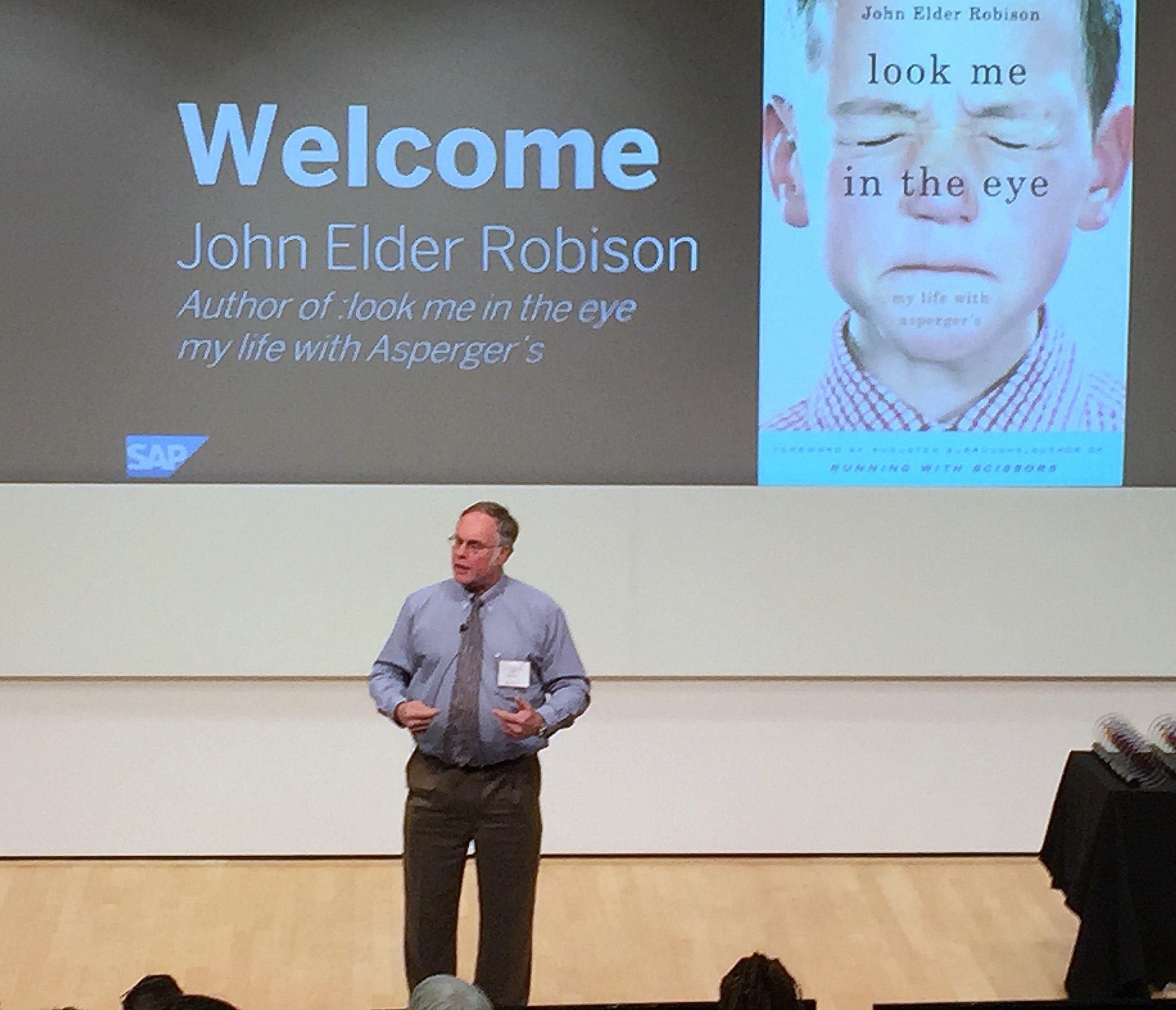 During his morning keynote address, Robison discussed his experience growing up with Asperger’s syndrome. He often felt sad and like a loner, unable to make friends.  His challenges in social settings social were dismissed as laziness, or deliberate misbehavior, and as a result he dropped out of high school in tenth grade.

Over time, Robison overcame this system that so successfully shut him out.  He later joined the corporate world, yet realized that he did not belong. Again he felt alienated.

Robison quit and began fixing luxury vehicles out of his garage.  Today, he owns one of the most successful independent repair businesses in New England.

Through a caring customer, Robison officially realized that he had been living with Asperger’s his entire life, and he was formally diagnosed.

Since, he’s thoroughly educated himself on the disorder and has held many positions, advocating for the world to change to include, accommodate, and help those that fit on the Autism Spectrum.

By denying autistic individuals the chance to work and learn, the labor force not only hinders their development and alienates people, but it [the labor force] misses a huge opportunity for success.

In May 2013, SAP announced its objective to have one percent of its global workforce represented by employees in the Autism Spectrum (about 650 jobs).  Diverse workforces facilitate business growth, innovation, and success.

Say What You Mean, Mean What You Say

Thorkil Sonne, of Specialisterne, spoke after Robison, explaining his organization’s partnership with SAP.

Specialisterne strives to enable employment for autistic people.  The organization envisions a world where people are given equal opportunities in the labor market through respect, accommodation, clarity, and accessibility.

Please watch this video that Sonne shared.  It particularly moved me.

The video centers on the need to take commonly-perceived negative traits and instead understand them as positive characteristics.  It’s about removing labels and eliminating health descriptors for people with special talents.

Sonne explained that the mainstream recruitment process restricts people who are different.  Yet Microsoft, Hewlett-Packard Enterprise (HPE), and SAP are working together to break these barriers. 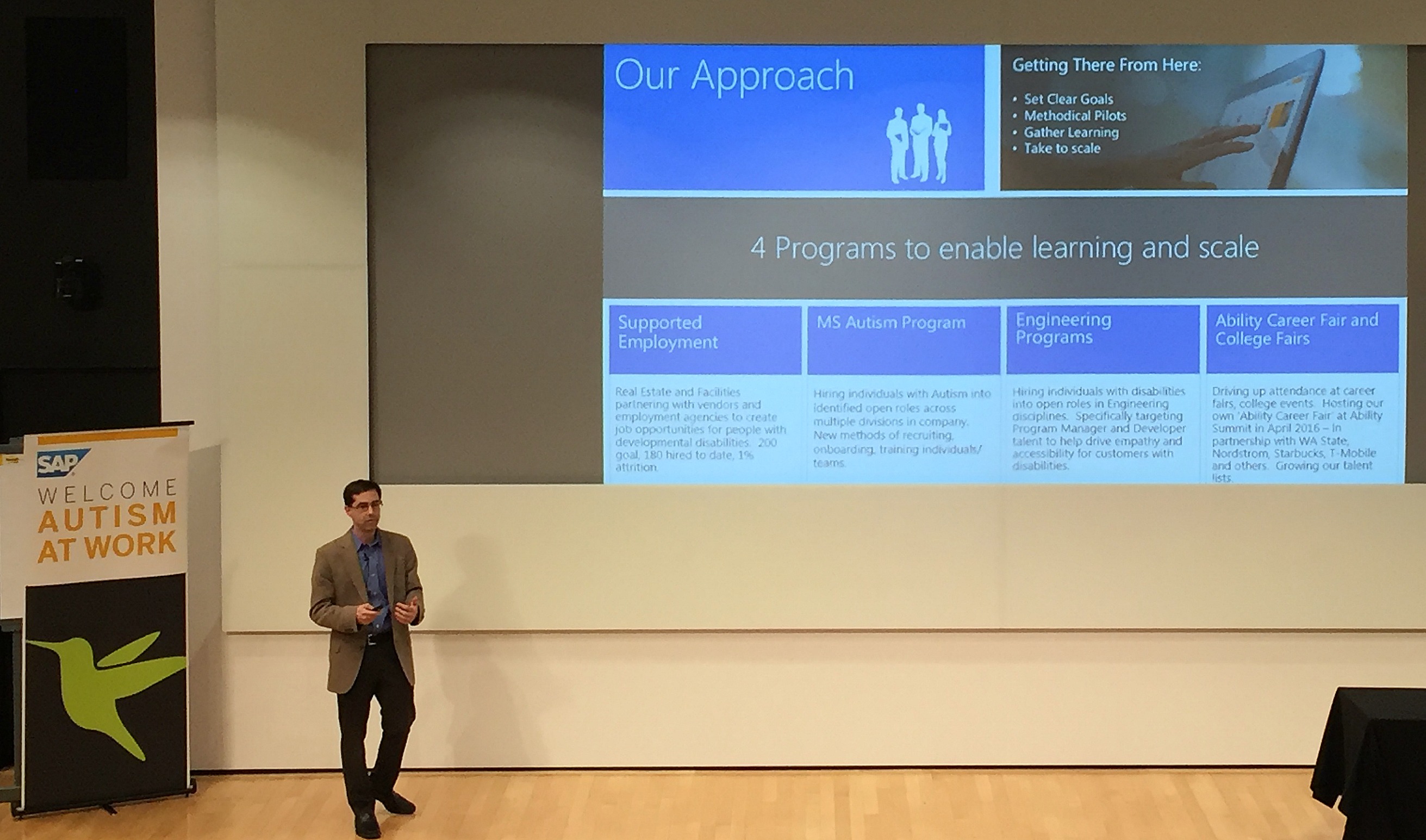 Microsoft’s Autism Hiring Program provides recruiters and managers with training to help applicants showcase their talents in ways that they feel most comfortable.

The program is built on four main foundations: respect, accommodation, clarity (avoid sarcasm, and be straightforward), and accessibility to guidance and learning resources.

New hires are teamed with a peer mentor, an autism community mentor, a job coach, and an HR manager who all guide the hire throughout his or her employment journey.

HPE is reforming its recruitment, onboarding, and retention program to be inclusive of all neurodiversity as well.

Since, the company has seen benefits on an economic, social, organizational, and individual level.

Programs like that of HPE are holistic; they expand beyond typical job training.

Community partners joined the tech giants in Newtown Square as well. Newmark Education, The Arc of Philadelphia, Mercyhurst University, and Hill Top Preparatory School attended the Summit to discuss their involvement and advocacy of connecting education with the labor market.

Overall, the message of the day was clear.  We must change how students are taught, how people with neurodiversity are hired into the labor market, and how organizations nurture employee growth and retention.

By building environments of inclusion, we all benefit—people, business, and society alike.

April is Autism Awareness month.  Show your support by sharing this article, and follow me on Twitter, @CMDonato

You can learn more about how organizations are helping to create and make societal change in the new PBS / WNET Television series, Faces of Philanthropy.