In this blog I will showcase this feature and how it should be used in SAP Web IDE.

Software Deployment: The process of getting software to the point where it is available for active use.

Past
In the past, due to technical difficulties, the deployment to SCP was done by creating a Git repository and pushing the application’s files into it.

This created an unnecessary dependency between the deployment and the Git source control mechanisms.

After we solved the technical difficulties, the deployment was implemented using a dedicated API without the need to use Git actions. This allowed us to make the desired separation between the deployment and the source control.

The deployment to SCP feature is now completely separated from the Git source control.

You have two options (depicted as radio buttons):

When choosing to deploy a new application, the account, project name, app name, and version are displayed. You can select a different account (if you’re a member in one) or edit the app name and version. 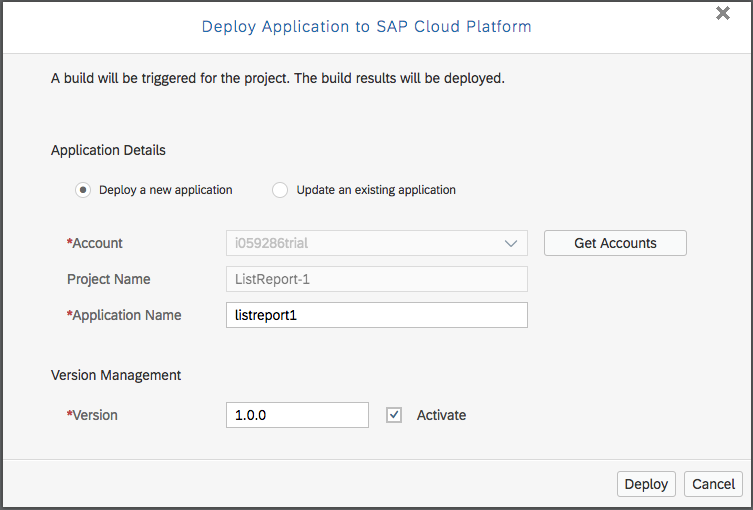 When choosing to update an existing application, the account, project name and version are displayed and you need to select the application you want to update from the dropdown list. Based on previous deployments of this app we prefill the account and app name but it’s subject to change. 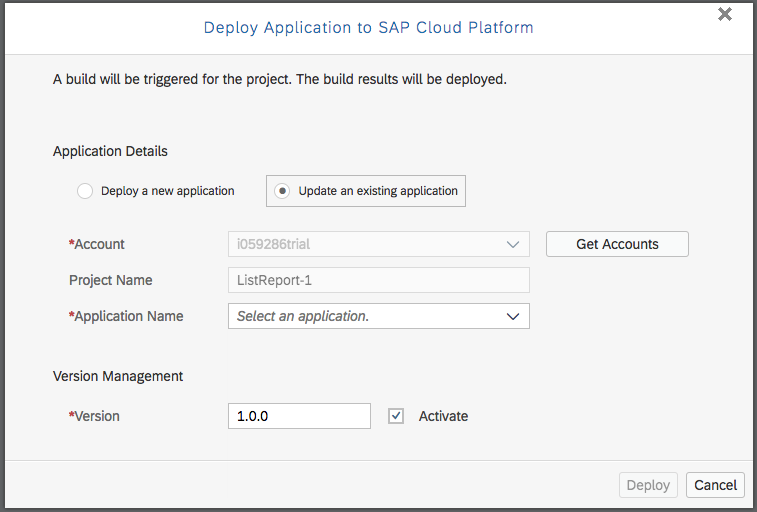 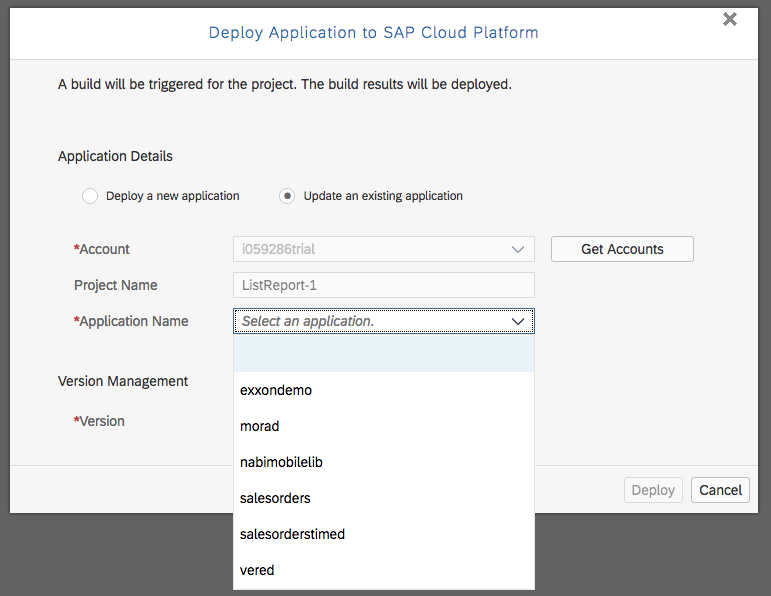 After deploying your application, it is ready to be used in your account!

The deployment process creates the app in your SCP account under the HTML5 Applications section with the version you selected.

A Grunt Build is performed in the background of the deployment process.
The build artifacts are then deployed to SCP and represent the productive and more efficient version of the application. It does not reflect the project’s source files. The application is then ready for testing or productive use.

Wait, where did my SCP Git go?

The application’s source code should be managed and collaborated with other developers using the great tools of Git – merging, conflict resolution, versioning and more.

One proposal for starting to work with SCP Git:

Now you can develop your app, collaborate with your peers, and share your code with the help of Git.

Once the development is done and the app is ready to be published, you can deploy it to SCP and make it available for others (e.g. for testing, release, etc).

You can also create a tile for it in your SAP Fiori launchpad on HCP. For more information, see Registering Applications to SAP Fiori Launchpad.

When previewing the app from FLP on HCP, an executable HTML file is not required. 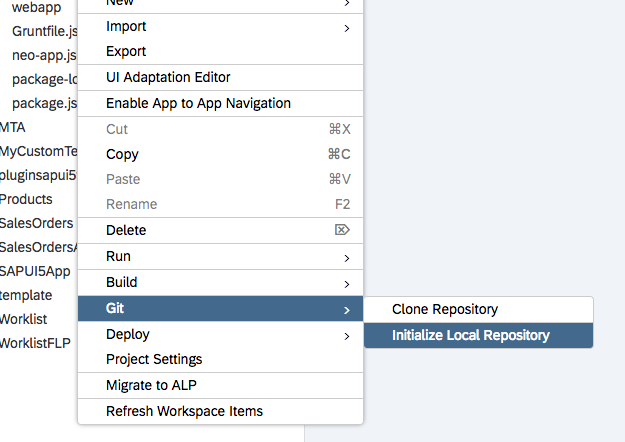 Nice document. I like it how the Web IDE is getting easier to use day by day, even for novice level users like me.

I am having problems with deploying one of my apps from WebIDE to HCP and I have posted a message describing the problem, Not able to update HCP application from WebIDE

Please take a look and see if you can help.

is there already a way to automate the deployment or HTML5 apps? For the SITreg: SAP Inside Track Registration app that is using a HANA XS native backend we've created currently 3 front-end apps:

As you see the repositories are hosted on GitHub to allow others to contribute by using their HCP Trial accounts. Currently I'm the one responsible to deploy on the SAP Mentors HCP Production account. I do that manually by using SAP Web IDE, pull the latest code from GitHub for the specific application and then deploy to HCP. You can check out i.e. the SAP Inside Track Participants. As you can imagine this process is tedious and could also be error prone.

I've already checked the Partners Operations Guide for HCP, the HCP Lifecycle API and the Change Management with CTS+. The Operations Guide describes only manual ways from dev to QA and production. I've tried the Lifecycle API but it returned only the Java Applications that where deployed on my account. So it seems that only CTS+ might be an option. Can you provide me any direction that I should investigate further?

Thank you for this very informative question.

I'm not familiar with an automatic way to perform the deployment.

I would expect the neo console client to take care of this, but it unfortunately doesn't support html5 applications yet. We're using neo to get Jenkinds to push new builds of the Lemonaid app to HCP though, but that app is built in Java.

If I trace the requests being made from th HCP cockpit when uploading an HTML5 application, I see the following 3 requests:

Maybe you can write your own logic based on Neo SDK to first log in, and then execute at least the first 2 requests

there are no REST API or console tool commands for HTML5 applications yet. It's planned but I cannot make any promises or provide a timeline.

So, currently, the only option is to reverse-engineer the Cockpit calls (beware of csrf protection). But it probably doesn't come as suprise that this is not an officially supported solution and it could break at any time.

Is this situation still the same for Continuous Integration of HTML5 applications? Partners are asking me how to do CI with Travis or Jenkins without the need to encapsulate the HTML5 on a Java Application (as this takes 1 compute unit per application).

I thought that the simplest solution would be to have the files pushed/commited to Account's Git Repository created via WebIDE. Then a simple REST API would "activate" a version based on a branch corresponding to the application version or something else that needs to be executed internally (which in my opinion should already exist in place internally, since this is done by WebIDE anyway).

I've seen the integration via an MTA archive, but doesn't this imply the use NodeJS in a Cloud Foundry instante?

I was not aware of the fact that MTAR archives cloud be used to deploy HTML5 applications on SAP-CP Neo Accounts. Thanks @sascha.scholz for pointing that out to me.

So basically you could use the procedures described below to perform CI for HTML5 apps:

The how-to illustrates how to use Jenkins and NodeJS with Grunt Cli to automate the HTML5 packaging into an MTAR file. Then use the Neo Cli (neo.sh) that comes with the SDK to push/deploy it to a Neo account.

I haven't tested it yet, but it should work.

Check the following link as well:

I created new version for Fiori Extended PR inbox applications.  I deployed my changes through webide--> deploy to SAP Cloud platform.  My changes deployed into dev system and I am able to see my recent modifications.

Let me know how to transport my changes to other environments (QA,PROD). Is it offline deployment (exporting the app from HCP and  importing into the target environment)

Either you go the full-blown way or you make it simple (if you’ve just started and have only a few projects):

The overall CI/CD Best practice guide is here (showing plenty of other possibilities to make use of CI/CD + Setup + Configuration): https://www.sap.com/developer/tutorials/ci-best-practices-intro.html

The simple way: Make use of git features (such as branches and tags) provided by SAP Cloud Platform to manage your stages (dev, test, prod) and work with SAP Web IDE in development account only. In case of a bug you can use the git features to provide a hotfix.

I hope this makes it clear.

Thanks for your response.  We have SAP cloud platform and we have different subaccounts under this.  I am the only developer working in this project.   I observed GIT version numbers increased after each successful deployment. I want to understand the existing option (import/ export ) option existing under each subaccounts

Else, export and import manually.

Is SAP working on allowing deployment using custom identity providers? We have contractual developers and feel that requesting OSS IDs for them just to allow them to deploy using WebIDE is too much.

This should already work when deploying to the same account Web IDE is residing on. If you wish to deploy to another account and you use custom IdP, this is not supported and not planned.

Thanks a lot for the reply Michal.

Just a quick followup question ... is this something one needs to configure/setup? See, when I try deploying an app to the same subaccount, I can only use my SAP ID 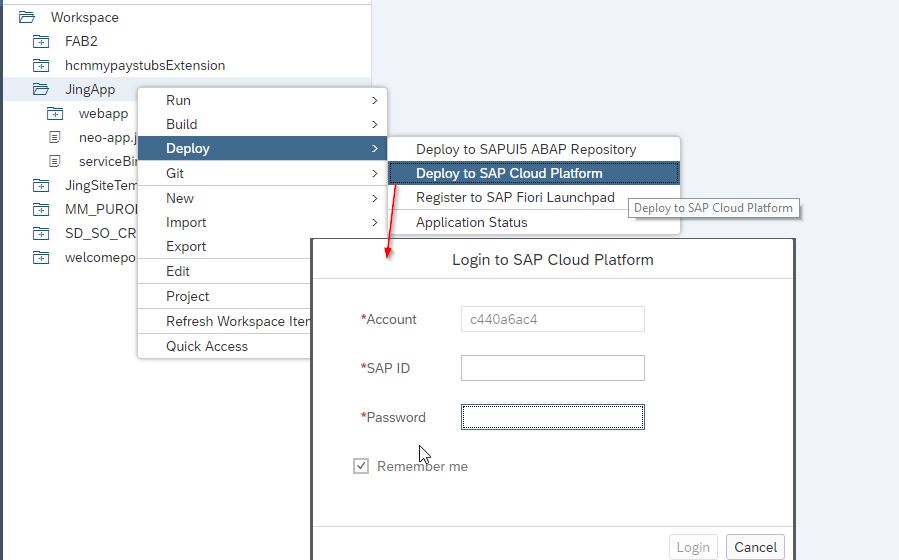 Question - is the custom IdP configured as the Application IdP? Or as the Platform IdP?

We have it for both.

Yeah then it will not work now. We're currently working on supporting custom IdP as the Platform IdP, but it's still a work in process.