Part One: How to Bathe a Dinosaur – Why Analytics Could Safeguard 90% of the Success of IoT 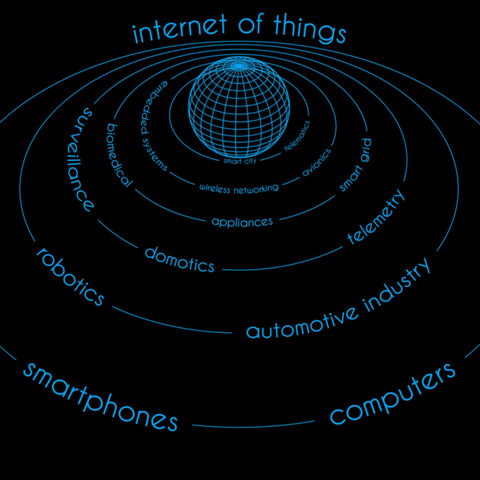 If you’ve missed the enormous attention around the Internet of Things (IoT), you’ve probably been in temporary hibernation. IoT is with you, it’s with me, with them …. IoT is everywhere, and we just got started. The Internet of Things has the potential to fundamentally shift the way we interact with our surroundings. The fact that IoT can electronically monitor and manage physical objects allows for data-driven decision taking. It will enable system’s performance optimization, create value with new business models, save people’s time, and increase quality of life. 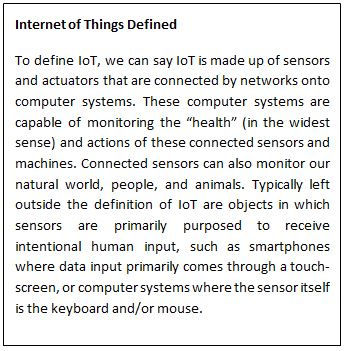 This year, we already have 4.9 billion connected things, and that number is expected to grow to 50 billion in 2020. IoT was focused at first at consumer markets with sensors (like fitness machines to monitor our heartbeats and calorie-burning). Now, IoT is starting at the B2B segments at much higher economic impact. IoT technologies and initiatives are deployed at vertical industry segments at a staggering speed and is expected to account for 70% of the total IoT impact in 2015. Smart cities using IoT-driven environmental monitoring or intelligent traffic management are an example of these new trends.

McKinsey research, however, proved that the current hype around the IoT is probably understated……… uhh understated? Yes, definitely understated, since the full economic impact estimates of IoT is valued at $3.9 -$11.1 trillion per year by 2025.

Voila, the cards are on the table. A potential economic impact of IoT in 2025—that represents a value equal to some 10% of the world economy. If you were still in hibernation, you’d probably be awake by now: $3.9 -$11.1 trillion per year in 2025.

So where is IoT today and how come we’re only at the beginning of the economic impact? Today’s IoT applications are either very consumer-centric or they are limited to vertical industries:

In order to maximize benefits from IoT, businesses need to connect the individual IoT systems and make them interoperable. Connected IoT applications strengthen each other when insights gained from them are combined. To really add value to the economic impact of interoperable IoT applications we need to introduce the concept of settings.

A closer review of the settings show nine settings where IoT will create that value that is estimated between $3.9 -$11.1 trillion per year in 2025. These settings are: 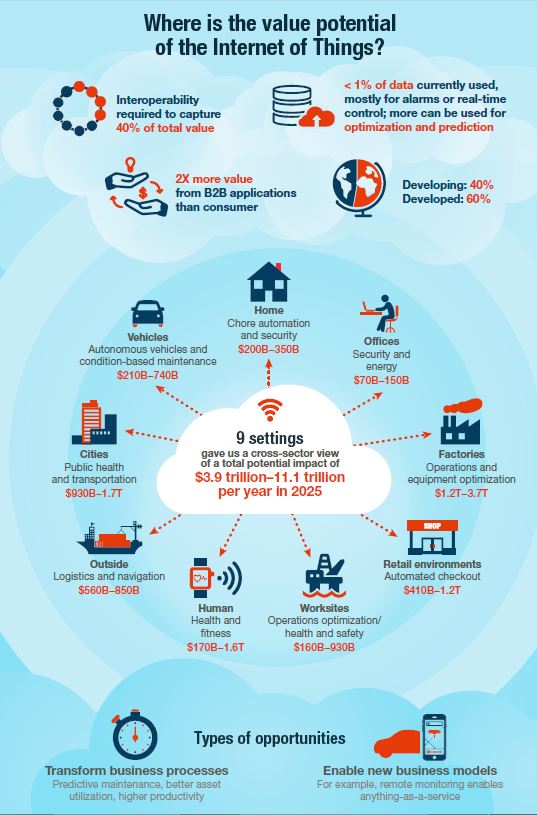 Think as wide as you can with the above summary. For example, if I mention vehicles, I don’t only focus on the obvious preventive maintenance or navigation area. Also think about pre-sales analytics. For example, a truck manufacturer can monitor the loading levels on the trucks sold to various fleet owners. Say a fleet uses a truck model with a 16-ton capacity, but daily use never exceeds eight tons per truck. The truck manufacturer can then cross-sell a nine-ton truck to the fleet operator, which can improve fleet fuel efficiency and make the fleet operator a more loyal customer.

Another example in worksites is usage-based design. IoT could provide manufacturers with relevant data to improve research and development. Based on actual usage data, manufacturers can determine what functions should be added, what parts could be improved, and what features can be removed. This can lead to increased sales and higher margins. Additionally, the stream of IoT data can become a business opportunity itself, as jet engine suppliers have shown.

As the infographic shows, research predicts that the biggest settings for economic impact are Factories, Human, and Cities. China is expected to be one of the largest users in the Factory setting.

The most important conclusion from today’s IoT findings is that when different IoT applications start communicating with each other, their economic impact is exponentially multiplied. When vertical industry IoT applications are made interoperable they’ll create a way bigger value than when they’re left isolated.

A second important conclusion is that most of the IoT data collected is either not used today, or, if it is used, it isn’t leveraged to its full extent.

The two big types of opportunities driven by IoT applications are 1) transformation of  business processes, and 2) new business models driven by interoperability .  In my next blog, I’ll detail these opportunities further, and discuss how predictive analytics affects the success of interoperable IoT.