NHL Bracket Breakdown: What It Takes To Win

The Playoffs have started and I hope you entered your bracket. With close to a million players participating last year, SAP is again providing fans with additional insights to get an edge over the competition. 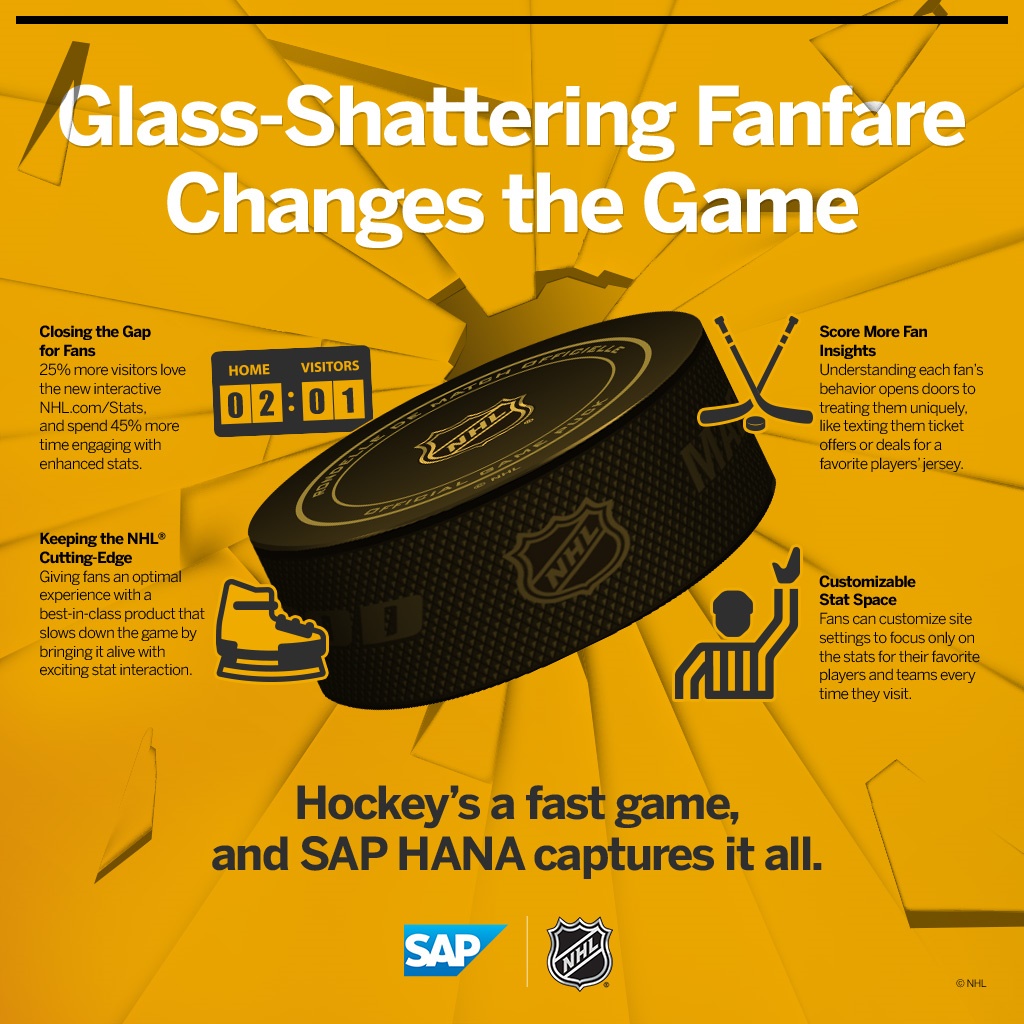 Powered by the SAP HANA® Enterprise Cloud, SAP Match-up Analysis was created with the fan in mind, by providing analysis for which team has a statistical advantage for each match-up, from the first round to the Stanley Cup Finals using a combination of 37 different factors.

Last year’s Challenge winners, Jamie Boutain of Chicago, IL and Randy Myers of Thunder Bay, ON both submitted brackets for the first time in 2015 and ended up in Las Vegas for the NHL Awards. For Randy, a lifelong Canadiens fan, the thrill of winning being one in a million didn’t really set in until he was standing on the red carpet with P.K. Subban, “It was incredible, it was really something.” Jamie didn’t disagree, “It was a lot of fun, I’ll never forget it as long as I live.”

Every fan has a different rationale for how they set their brackets. Some rely on their gut instincts while others stick with their team, no matter the odds. Jamie’s bracket was a great example where loyalty and logic collided, as he looked at the first round match up between his favorite team, the Minnesota Wild, and the Chicago Blackhawks. “I still look back and I wonder why I picked Chicago to sweep Minnesota. I knew if Minnesota could win one game, they could win four, but in the end Chicago looked too strong. That was the hardest decision for me.”

Looking ahead to this year, Randy says he’s going to take more than just the stats into account when picking a Stanley Cup® Winner since the field is so close. “In a seven game series the teams aren’t that far apart, it’s going to be intangibles like leadership that make the difference.”

For those looking to join Jamie and Randy in the Stanley Cup® Challenge Winner’s Circle, we sat down with NHL on NBC Analyst and SAP Ambassador Eddie Olczyk to take a look at five key stats from the regular season and how each may affect the teams as they begin their quest for the cup.

3.23 – Goals Scored Per Game By The Dallas Stars

The Stars offense has been firing on all cylinders this season. They’re averaging over three goals per game, about half a goal above the league average. It’s pretty amazing how consistently they’ve been putting the puck into the back of the net, especially over the last ten games, where they’ve continued to produce even without arguably their best goal scorer in Tyler Seguin.

Seguin took to the ice this week for the first time since his achilles injury on March 17th. After seeing him skate, Stars head coach, Lindy Ruff, said there’s no guarantee that Seguin will be ready to go for Game 1 against Minnesota. While guys like Jamie Benn, Jason Spezza, and Patrick Sharp can hold their own on the offense, my question is will Dallas be able to defend in the Playoffs, when the games aren’t going to be as open as the Stars like to play.

Anaheim has come a long way from the start of the season and there’s no doubt that their performance on the power play and penalty kill this season has helped them overcome their a tough start. They’ve managed to lead the league in both categories this year after sitting at 28th and 15th in the table respectively during last year’s regular season. That’s a huge advantage going into the Playoffs.

While the Ducks have the luxury of leading in both right now, if you asked most coaches which they would prefer if they had to choose between a strong power play or a strong penalty kill, there’s no doubt that most would pick their penalty kill. It’s tough to win a Playoffs series solely on your power play, but it’s easy to lose a series if your penalty kill isn’t going well.

10 – The Combined Total Of Shutouts By St. Louis Blues Goaltenders

To have success in the Playoffs you need great goaltending, and it’s hard to ignore the duo in St. Louis. Brian Elliott has been solid between the pipes, posting a .930 save percentage, the highest in the league for goalies who have started at least 15 or more games this season. Jake Allen is right up there with him with a save percentage of .920.

This team is much different than last year, they are deeper and more dynamic. Most importantly, they’re relatively healthy. Combine that with the consistent goaltending they’ve gotten and if you’re a skater, you can play on your toes. I don’t want to say take chances, but if you’re St. Louis, you can feel pretty comfortable that if you pinch in and give up an odd-man situation, the guys in goal are going to have your back. For a shot to skate past the defending champions in the first round, the Blues can’t play it safe.

Expectations are through the roof for the Washington Capitals after the season they’ve had. While their offense is strong with one of the most prolific scorers in the league in Alex Ovechkin, they play both sides of the puck well. The Capitals are second in the league in Goals Against Average at 2.33 per game. In my eyes, that’s largely in part to Brandon Holtby, who’s had a historic year.

There’s no team entering the Playoffs with more pressure on them than the Capitals. Last year’s first round loss to the New York Rangers was the 10th time in franchise history that Washington has blown a two game series lead. It’s time for the Capitals to put the past behind them and take the next step. They’re schooled enough, they’re coached enough, they’re experienced enough, and I would be surprised if they didn’t get to the Conference Finals in the East.

As stated on NHL.com/Stats, for the past several seasons, full-season team shot attempts % close (Corsi close) has been a significant indicator of which teams make the Stanley Cup Playoffs. Over the last four seasons, the Kings have led the league in shot attempts % close three times, making the playoffs three times, and winning the Stanley Cup® once in that time period.

The Kings play a straight ahead, north/south heavy game. They’re hard to play against, there’s not a lot of room, and when teams line up across from them, they know they’re going to have to battle. One of my main concerns for the Kings, however is their mobility on the back end and whether they will be able to keep up with the high powered offenses, series after series, in the West.

SAP is helping the NHL Run Simple. Click here to learn how technology can transform your business.