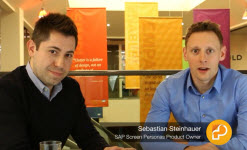 The SAP Screen Personas product team recently had the opportunity to host Francis Rodrigues, Global SAP Screen Personas Champion at Nestle, for several weeks over the past few months for some co-innovation work. In this series of three Productivity Power Play episodes, Sebastian Steinhauer speaks with Francis about several dimensions of the collaboration between Nestle and SAP regarding the deployment of SAP Screen Personas to several Nestle business units around the world.

Francis talks with Sebastian about the original goals of the SAP Screen Personas project at Nestle and then breaks down the process of how to achieve them. He discusses how to scale SAP Screen Personas across a large company and maintain consistency. He ends with some tips on setting up your screen simplification process for success.

Francis discusses his initial impressions of SAP Screen Personas 3.0 and which features he finds most exciting. He glows about the new admin transaction and how this will help him migrate to version 3.0.

See all the episodes.