we’ve heard the need for clarify on SAP S/4HANA release strategy, especially how a Feature Pack Stack relates to a Support Pack Stack,…

I will try to give you our SCN readers clarity on that, with a focus on the on premise product only: SAP S/4HANA, on premise edition

What is a Feature Pack Stack and at what cadence are they shipped?

Technically speaking, an FPS is similar to an SPS, but it may include non-disruptive, non-mandatory features. You will find the detailed definition of an Feature Pack Stack in the release strategy glossary: https://support.sap.com/release-upgrade-maintenance/release-strategy/glossary.html#f

What does this mean concretely for SAP S/4HANA, on premise edition?

In Q4 2016, SAP S/4HANA, on premise edition 1511 will go into maintenance only mode, and will be supported with SPS (Support Package stacks), according to the maintenance contract.

The numbering of FPS/SPS will be consecutive, i.e. the first SPS after a FPS3 would be consequently SPS4.

At the same time, SAP will ship the next big on premise release, SAP S/4HANA, on premise edition 1610, which will be followed by Feature pack stack on a quarterly basis.

1. SAP will ship neither an FPS in Q3 2016 as initially announced, nor an SPS. All the planned, non-disruptive, non-mandatory features were shipped with the FPS2.

2. SAP will ship an SPS in Q4 as planned and communicated and shown below

3. SAP will ship as planned a major release, SAP S/4HANA 1610, planned for end of October 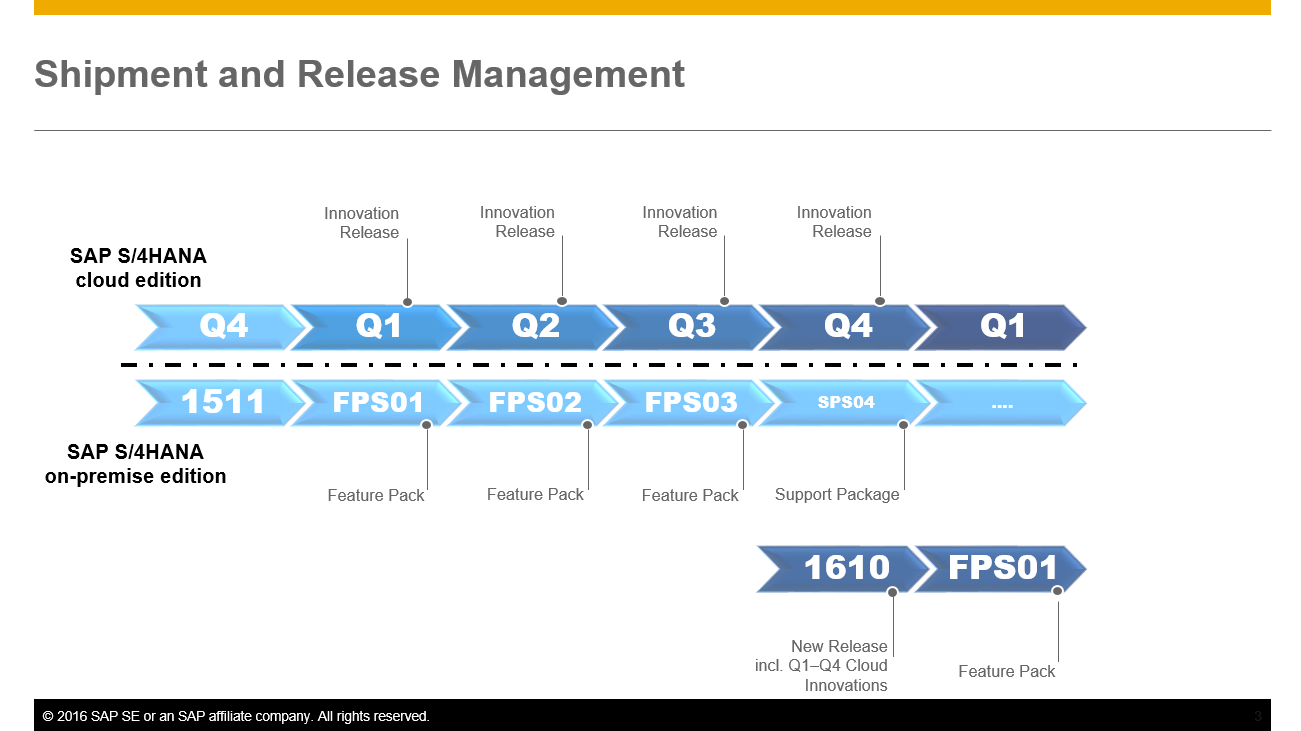 You will find more details about the maintenance rules strategy here:

Hope this help to clarify the topic, happy to get your feedback!

Thank you very much for the clarification, Yannick!

So the re-phrase it in my own words:

For S/4HANA 1511 on premise, we get a new "paket" of software about every quarter;

(but the method of delivery is the same, right?!)

So if "Installed Software" says

but if it says

And one last question to round everything up:

Eventually I'll get SAP S/4HANA, on premise edition 1610 - how will that be represented at software component relese-level ?

from a technical/deployment/delivery point of view SPs and FPs are the same. The only difference is the "promise" that comes with them:

SP: Just patches (new functionality is not even allowed here)

So your assumptions are right.

Christian's answer is absolutely correct. Technically FPS and SPS are the same, FPS can include minor, non mandatory, non disruptive features. Check our Q1 2016 blog to find examples of features delivered with FPS1.

Regarding the release level: you have properly spelt the logic Joachim. I'll get confirmation on the # from the production team.

Thanks again for raising the topic.

... and to answer to your other questions on the #

here are both options possible, you will find the final name at shipment of the software.

Well, it has been a while, but now we know:

Thanks for sharing the screenshot Joachim! Best, Yannick

Coming back here after a few years:

Good we got that solved!

I found the Blog: SP, SPs, SR | SCN in which people tried to explain this.

2. What I am really missing, ever again, in my past few years in the SAP World, is a clear documentation on all the marketing speech, versioning language and constellations (Suite,ERP Core, Platform,...). There must have been so many steps in the product architectures, portfolios, components, applications, naming, versioning schemes - I believe I am not the only one finding this very hard to get sorted. Isn't there any central explanation?

thanks for your note and recommendation. On 1: will do.

On 2: point taken! I'd recommand to focus on 2 things first:

... to understand the business scope of the different solution

... to found out the recent and planned innovation

Hope this simplifies a bit the understanding.

This helps me to understand these concepts. Thanks.

Thanks to you Ning for the feedback. I am glad it was helpful. regards Yannick

Great information and clarity. Now it is lot clear on future releases of 1511 FPS versions followed by 1610 FPS.

I was wondering how you should update to the new patch level, as our Solman 7.1 with the highest SP level is not able to generate a stack file :

Is this something that has to be done with Maintenance Planner instead of the Maintenance Optimizer?

Hi Paul, thanks for the feedback, appreciated. You will find such information in the roadmap http://go.sap.com/solution/roadmaps.cross-topics.html
With this new version of the roadmap we give more clarity on what comes when. Hope this helps, regards, Yannick

one detailed question about software packages inside the FPS / SPS.

Are there only with a new edition like 1610 updated, or also with a FPS update?

Hi Dirk, yes there are software packages (with SPS3: AS_ABAP for S/4HANA)

Thank you, this is great information.

One question if you don't mind. Has the SAP S/4HANA on premise edition 1610 been confirmed for Q4? I checked SAP Marketplace and the SAP S/4HANA Road Map from July 2016 does not mention it.

Hi Jarlath, thanks for your feedback.

yes it is confirmed for Q4 with great innovations, including a consistent UX across the suite. regards Yannick

Thanks for the confirmation.

As we are now in mid-October, has there been a confirmed date for the availability S/4HANA on premise edition 1610?

as far as I know it was released on the 31st of October!

Hi Jarlath, 1610 is planned for the very end of this month, a few more days to go.
Regards, Yannick

I'm wondering, and would appreciate your input, if  based on the information below from SPAM, can say we are on FPS2.

Thanks and Best Regards,
João

Thanks Joachim for your contribution to the S/4 Community! This is much appreciated. Yannick

It's really nice to be recognized!

thank you for your reply and understand the explanation.

In between my post and yours, and because we were having some trouble because were asked to implement software that should be there, checked the Maintenance Planner (which was wrong), and the Solution Manager, and updated the entire stuff including the Content Repository.

Asked Maintenance Planner to prepare a solution to update the system to FPS02 and it prepared a package. After applying that package got this:

(this list is correct, the previous was missing all of these products inspite they were installed..)

After applying this, and updating Maintenance Planner (MP), asked again to MP (to double check) to prepare an update solution to FPS02, this time nothing come out.

Meaning, how can we be sure about the FPS/SPS level? Is it given by the S4CORE or by other components? Do you know a place, document, that can further clarify this?

Thank you and Kind Regards,
Joao

sorry, I don’t know anything about Maintenance Planner and stuff like that (I’m not a Basis-person), so I probaly cant really help you here. ?

All I can say (and that’s a repeat of my last comment) is that it is my undestanding, that you can tell by the S4CORE-Component on which Product/Release and FPS/SPS you are:

Could you please let me know which would be the best practice to use? Either 1511 or 1610
We are in the initial stage of a POC and looking forward for a Big Time project as well.
Since now we heard 1503 is ruled over by 1511, and since then before we digest, SAP has introduced and released 1610 last month, could you please advice which would be better to proceed further (either 1511 or 1610)

We are considering the Finance and Controlling part (E2E) including the Cash management and Consolidation.

Kindly let us know which would be the best to start up and any links on what is New in 1610 over 1511 so that we can include that as well would be appreciated.

Hello, thank you for your note. With the release 1610, SAP has integrated the entire scope from S/4HANA Finance (aka Simple Finance) in S/4HANA. Please check the details in the launch documentation to get an overview.

Hello Yannick - Thanks for the great insight !

Have a query which may not be related to this blog but for the sake of my understanding I would like to ask.

FP: New functionality + enhanced functionality + patches/bug fixes but as you mentioned that they are non disruptive/minor changes so obviously they are different from EhP’s ? EhP’s as such are not relevant from S/4 HANA perspective but for Business Suite and other non HANA products, correct ?