Here in this article you will get to know that Form 10E is mandatory to claim Section 89 Relief, and calculation related to Form 10E in SAP.

Tax is calculated on your total income earned or received during the year. If your total income includes any previous FY dues paid in the current FY, you would be thinking about paying a higher tax on such arrears if your tax slab has been changed over a period.

But to save you from additional paying tax due to delay in your own payment from past FY, there is a section in tax laws named as section 89. If you have received any income of your salary in arrears you are allowed some tax relief under section 89

SECTION 89 l RELIEF WHEN SALARY ETC., IS PAID IN ARREARS OR IN ADVANCE

623. Scope of relief under the section in five situations explained

1. Section 89(1) authorises grant of relief in a case where an employee receives salary in arrears or in advance or has received in any financial year salary for more than twelve months, a payment which under the provisions of section 17(3)(ii) is a profit in lieu of salary. The effect of such increase is that the income will be assessed at a higher rate than it otherwise would have been assessed and it is for this reason that section 89(1) authorises relief to be allowed. The relief is to be allowed in terms of rule 21A of the Income-tax Rules, 1962.

2. Rule 21A(1) enumerates the following five different situations wherein the assessees will be entitled to relief (four of these are specific situations while the fifth is a residuary one) :

a. salary being received in arrears or advance;

b. where the payment is in the nature of gratuity in respect of past services extending over a period of not less than five years is received;

d. where the payment is in the nature of commutation of pension;

e. where the payment is not covered by the description given in (a) to (d) above.

The relief is to be worked out in the first four situations in accordance with the specific modes described in rule 21A (2)(a) to (d ).

3. The authority to grant relief in the four specific cases is the Income-tax Officer assessing the employee. In the residuary case, it is Central Board of Direct Taxes.

4. The relief under section 89(1) is to be given in the assessment in which the extra payment by way of arrears, advance, etc., is taxed. The mode of granting relief spelt out in rule 21A(2) to 21A(5) would show that in all the four different cases the exercise of giving relief is initiated by bringing to tax the whole of the extra amount in the assessment for the assessment year relevant to the year of receipt. Basically, the relief under section 89(1) is arithmetical. It involves finding out of two rates of tax. The first is the rate of tax applicable to the total income including the extra amount in the year of receipt. The second is finding out the rate by adding the arrears to the total income of the years to which they relate. For this purpose the assessee should be asked for a true and authentic statement of the total income of the earlier years to which the arrears pertain There is no warrant for issuing a notice under section 148 or calling for returns of income of the earlier years.

Now the question is does SAP support standard Form 10E or not ?

And the answer is NO !

According to NOTE 2215579 released on 09.09.2015 SAP has clearly mentioned that The report Form 10E is not there in the current scope of the product, i.e. SAP Payroll-India solution. Customers need to develop the same as project solution

Here in this actical i am explaining you the calculation of Form 10E, as Form 10E has already been implemented in many customers. 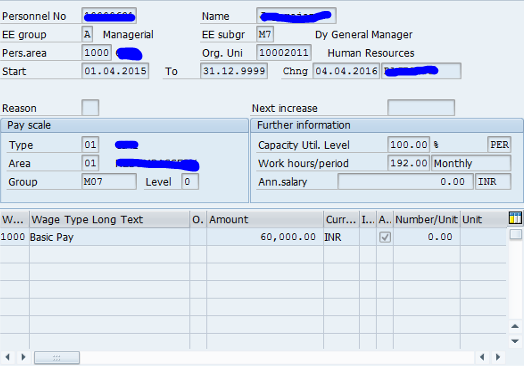 And the Form 10E as shown in below images_ 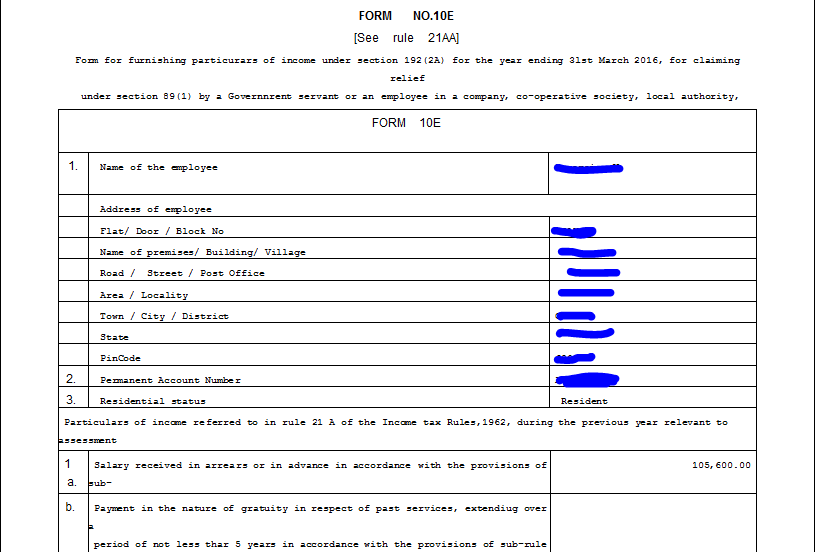 Hope this will clear the view of Form 10E.  Enjoy!!