Additional listener configuration parameter has been introduced to allow exclusion of specific attributes of sample result from being sent to Elasticsearch server.

Apache JMeter (Apache JMeter – Apache JMeter&amp;trade;) is one of popular tools for load testing, which became a “Swiss Army knife” in the area of integration scenarios performance testing. It is open source, lightweight, supports variety of load generator types (called samplers in JMeter’s terminology), and it is flexibly extendible. Most commonly extension plugins are developed for samplers – so that JMeter can be used to generate load for specific technologies and protocols. But there is another area, which is worth of paying attention to – processing, presentation and visualization  of test results. In JMeter, listener components are responsible for this task. JMeter is already equipped with some of them, 3rd party plugins enrich listeners capabilities by bringing new listeners – but in majority of cases, listeners are either visualizing test results in JMeter, or exporting them to external files. Test results visualization in JMeter is limited to user interface technologies used by JMeter, export to external files requires further data processing and rendering.

For those who would like to familiarize themselves with JMeter, there are technical materials describing its basic concepts, development and usage of test plans and their major components: a good starting point is documentation published on JMeter’s official web site, complemented by examples of JMeter test plans, which can be found over the Internet and on SCN.
In this blog, I would like to describe an alternative approach, which employs external data visualization tools for presentation of test results obtained from JMeter test plan executions in real time. I will use Kibana (Kibana: Explore, Visualize, Discover Data | Elastic), which is a part of ELK stack, but generally speaking, the approach can be easily adopted and other data visualization / dashboard tools can be utilized instead. In conjunction with Kibana, which is used for data visualization, I will utilize Elasticsearch for storing and indexing JMeter test results data (samples data). Principal flow diagram depicting involved components, is provided in the illustration below: 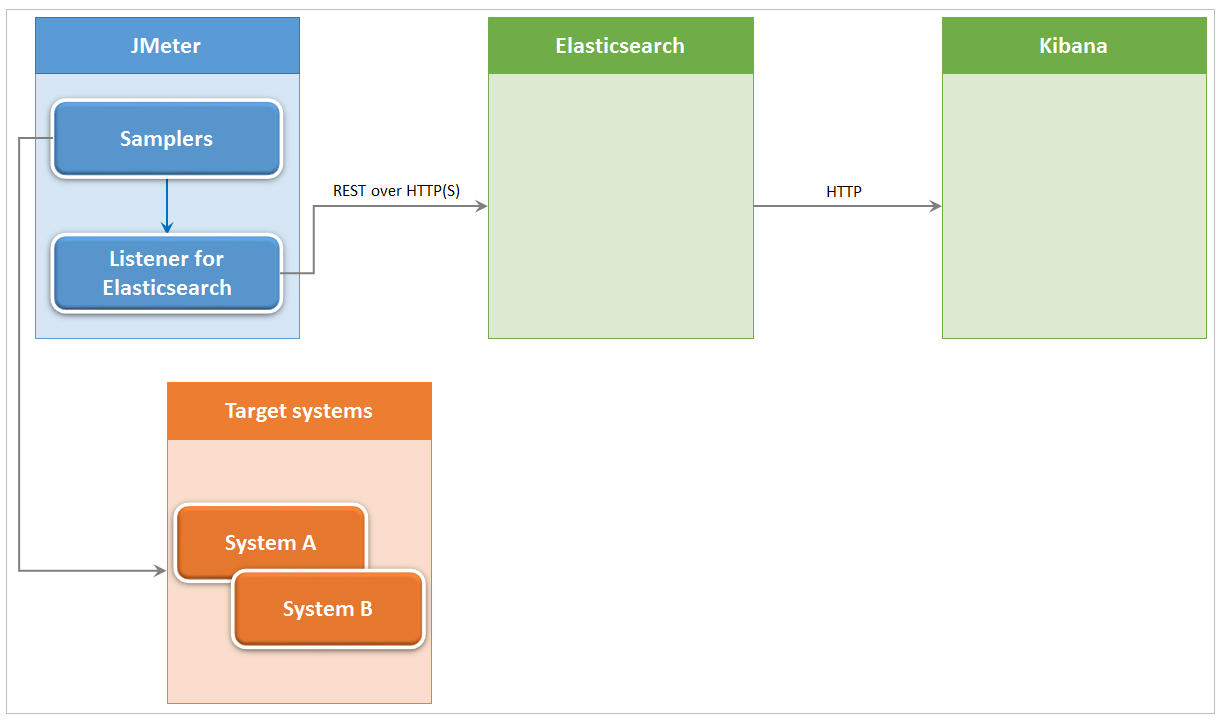 Following 3rd party libraries that are not contained in JMeter distribution, where used in implementation of a listener for Elasticsearch:

Other dependency libraries that are used in this listener, shall already be contained in JMeter distribution.

At least JRE 8 is required to use it.

Source code of the developed listener, as well as compiled and built plugin (which is distributed as a JAR file) can be downloaded from GitHub.

The developed listener has been tested with JMeter version 3.2 running on Java 1.8 runtime.

Below is a screenshot of main components of a test plan and configuration of a developed listener for Elasticsearch. As it can be noticed, custom listener is added to a test plan using component Backend Listener and selecting a class that implements the required listener:

The test plan configuration implies execution of samplers several times – having done so, we are capable of collecting some volume of test data, that is sufficient for visualization demonstration in Kibana.

The developed listener produces log entries that can be accessed from JMeter – info / error messages for major events and debug messages in case details of listener execution need to be collected: 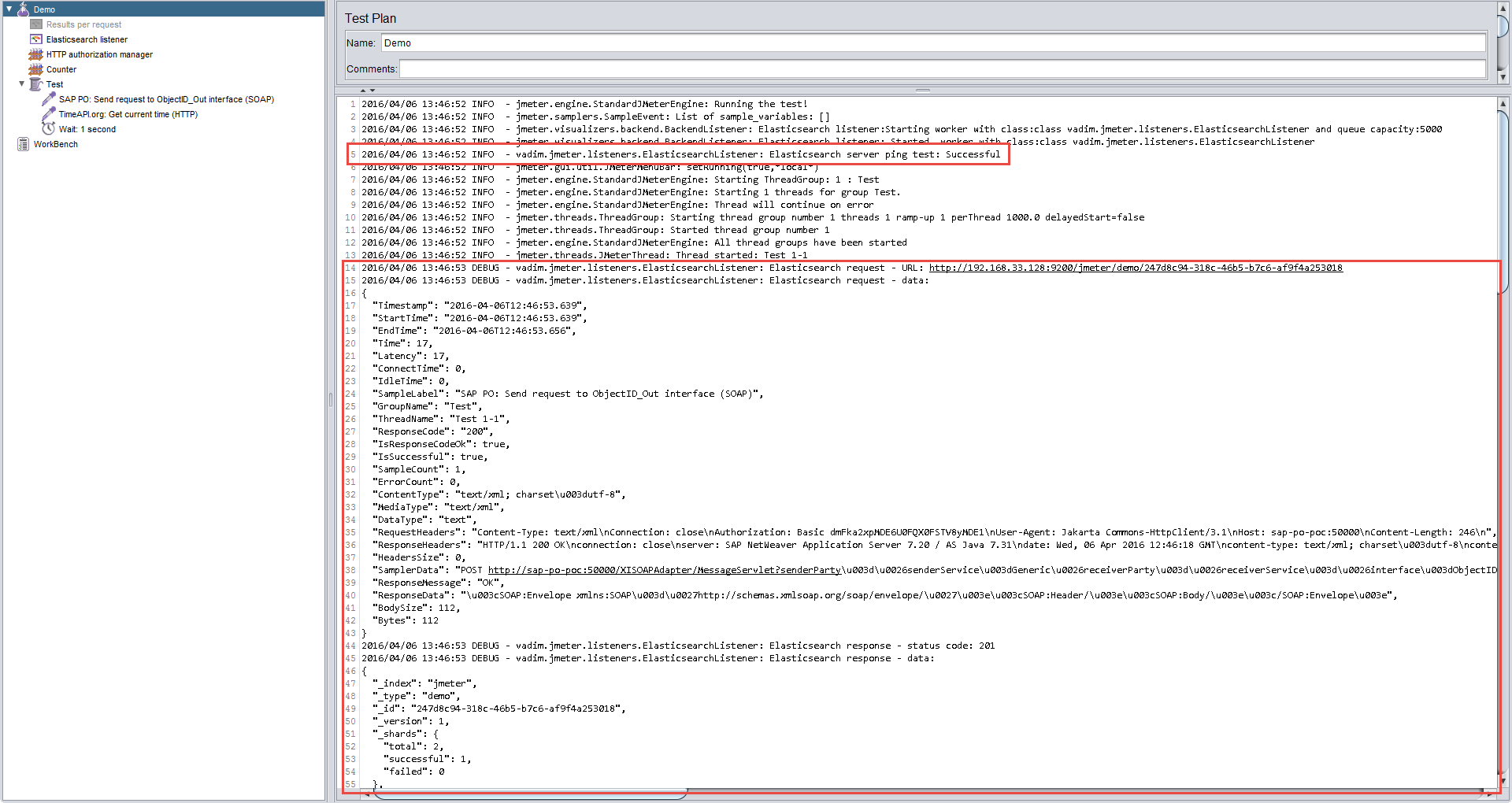 Configuration of Elasticsearch and Kibana, as well as development of visualizations and dashboards in Kibana are out of scope of this blog. Please refer to official documentation available on Elastic web site and tutorials published in Internet in case details are required in regards to these topics.

Let us now start test plan execution in JMeter and simulate both successful and failed sample executions in one of target systems. Below is an outlook at results visualized in a Kibana dashboard: 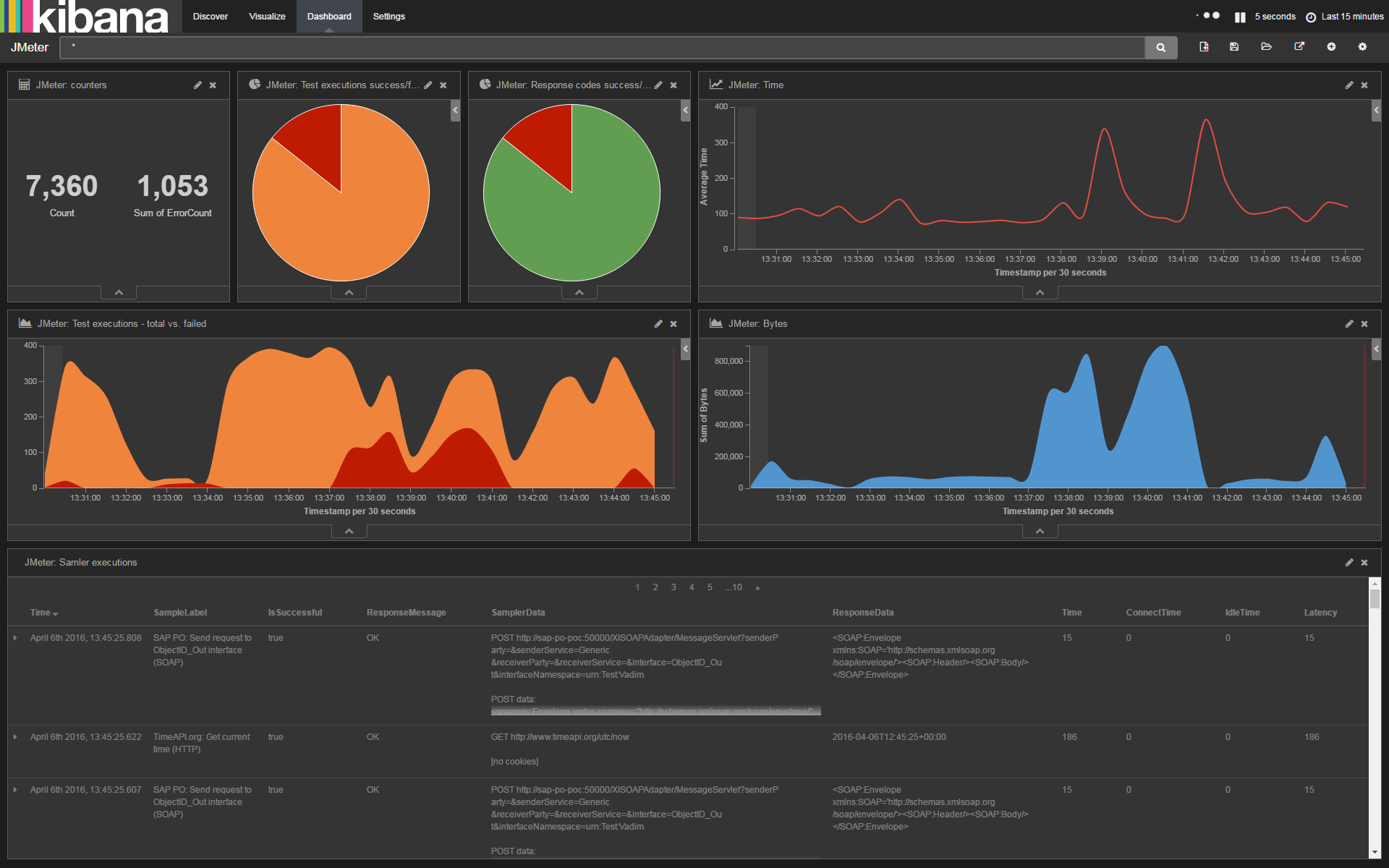 It shall be noted that just few attributes of retrieved test results were visualized and used in a demonstrated Kibana dashboard – there is much more data sent by a listener and indexed by Elasticsearch, which can be used for more precise analysis of test results. Below is a sample indexed document (test sample) containing various metrics and test sample request / response data, which were submitted by JMeter, persisted in Elasticsearch and available for visualization in Kibana: 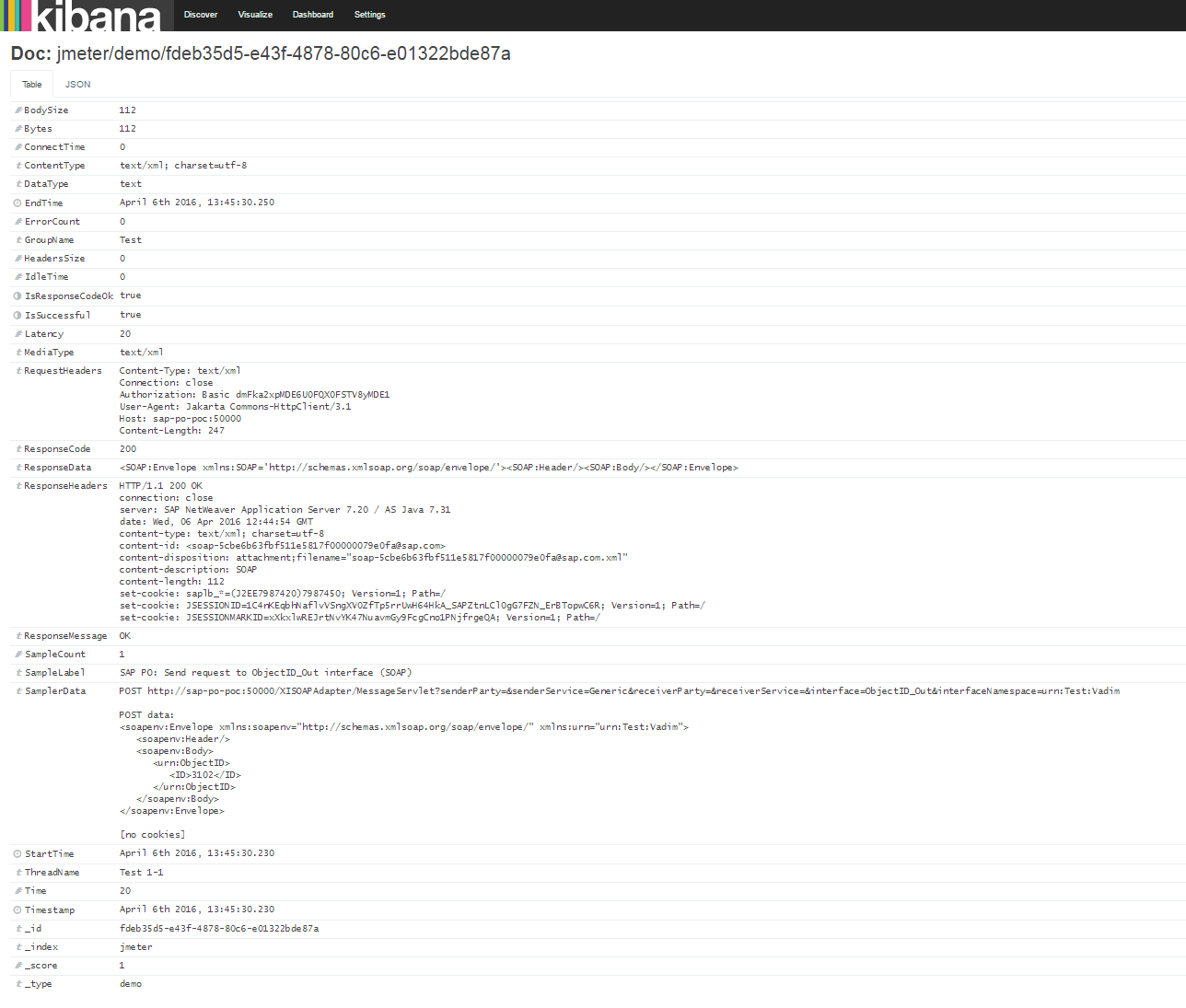