Using the SAPUI5 UploadCollection to upload/download ArchiveLink files via Gateway

First off, disclaimer: this blog post contains my views only and are not reflective of my employer or anyone else. Now that’s out of the way, we can begin!

I was asked to build a prototype UI5 application where the user can view and download existing attachments for an ISU business partner from ArchiveLink, as well as upload them. In the process of researching the prototype, I came across many helpful blogs, but I thought I’d also share my experience since I haven’t seen my particular scenario documented end to end.

The requirement to get and create attachments in ArchiveLink is not new, so I won’t really dwell on that. Instead I will be focusing on how it all hangs together, and the tweaking I had to do to deal with the ever so temperamental UploadCollection.

The next step was to build the Gateway service. This was pretty straightforward too, with just some tweaks to handle media types and streams. I basically had a Customer entity (unfortunately everything is in German but you’ll get the gist) which has an association with a CustomerFile entity. It’s via the CustomerFile entity that we can retrieve the value stream of the file, as well as perform the upload. In particular, note that for this to work, you need to set the entity that is handling the file content as a media type (see the checkbox below).

Other than that, the rest is as per any Gateway Service Builder project. After generating the classes and runtime objects, the next step was to redefine the methods required to handle the upload and download of content streams. I referred a lot this amazing blog by Peter Marcely, which also includes handy code snippets. You can find my code snippets below for the methods that I needed to redefine:

/IWBEP/IF_MGW_APPL_SRV_RUNTIME~GET_STREAM (note: I didn’t really need this for the UploadCollection as the URL is used to retrieve the document, but this was useful for testing. If you need to embed the content of the file, say in an image control then this would be useful).

REPLACE ALL OCCURRENCES OF ‘#’ IN lv_mimetype WITH space.

REPLACE ALL OCCURRENCES OF ‘#’ IN lv_filename WITH space.

Next I created a simple UI5 application that allows the user to view the attachments that exist, while also having the ability to upload new ones. The control that made the most sense was UploadCollection, which seems to be relatively new (read: buggy). In principle this was the perfect control for the use case, however when I started using it I realized that it’s still in its developmental stages. I referred to the UploadCollection example in SAPUI5 Explored, but please note that uses hard coded JSON data.

First thing I realized is when I disabled instantUpload, I lost the ability to display the existing attachments in a list. The list becomes the waiting area only for the attachments you will be uploading. That was rather annoying, because sometimes you want to check the files before you decide to upload them, as well as being able to see what files already exist. Perhaps this will be improved in a later release, but for now I just had to leave instantUpload on.

Another thing I noticed: after the UploadCollection is instantiated, you can no longer set the upload URL dynamically. This means you either hardcode it in the view definition (yuck), or you set it once at initialization, which is what I ended up doing. I find it strange that we are given the setter method, but when you use it after instantiation, you get this error:

Then there’s the CSRF Token. I get why we need to use these, but to have to set it manually in the code is just mind boggling. Essentially I had to retrieve the CSRF Token in an AJAX call, and store the token to be sent with the upload request. This seems to be the case also with the FileUpload control as there are loads of other posts describing the same workaround. It would be nice if this was all handled automatically in the standard control.

The final thing I had to tweak was the completed upload event handler. I expected to have access to the response from the upload request (similar to reading the model) in this event, since it is triggered after a successful upload. Think again. If you leave this method empty, the status of the upload stays at 99% forever. I didn’t really want to rebind the whole UploadCollection aggregation each time an upload is completed, since the list could load quite slowly and appear strange to the user (while a new file is uploading, it appears at the top of the list, but after rebinding it goes somewhere else). In the end I had to resort to rebinding because it was the cleanest way. I added a busy dialog with a delay so the user wouldn’t see the file hop from the top to somewhere else.

Below are some screenshots of the application in action: 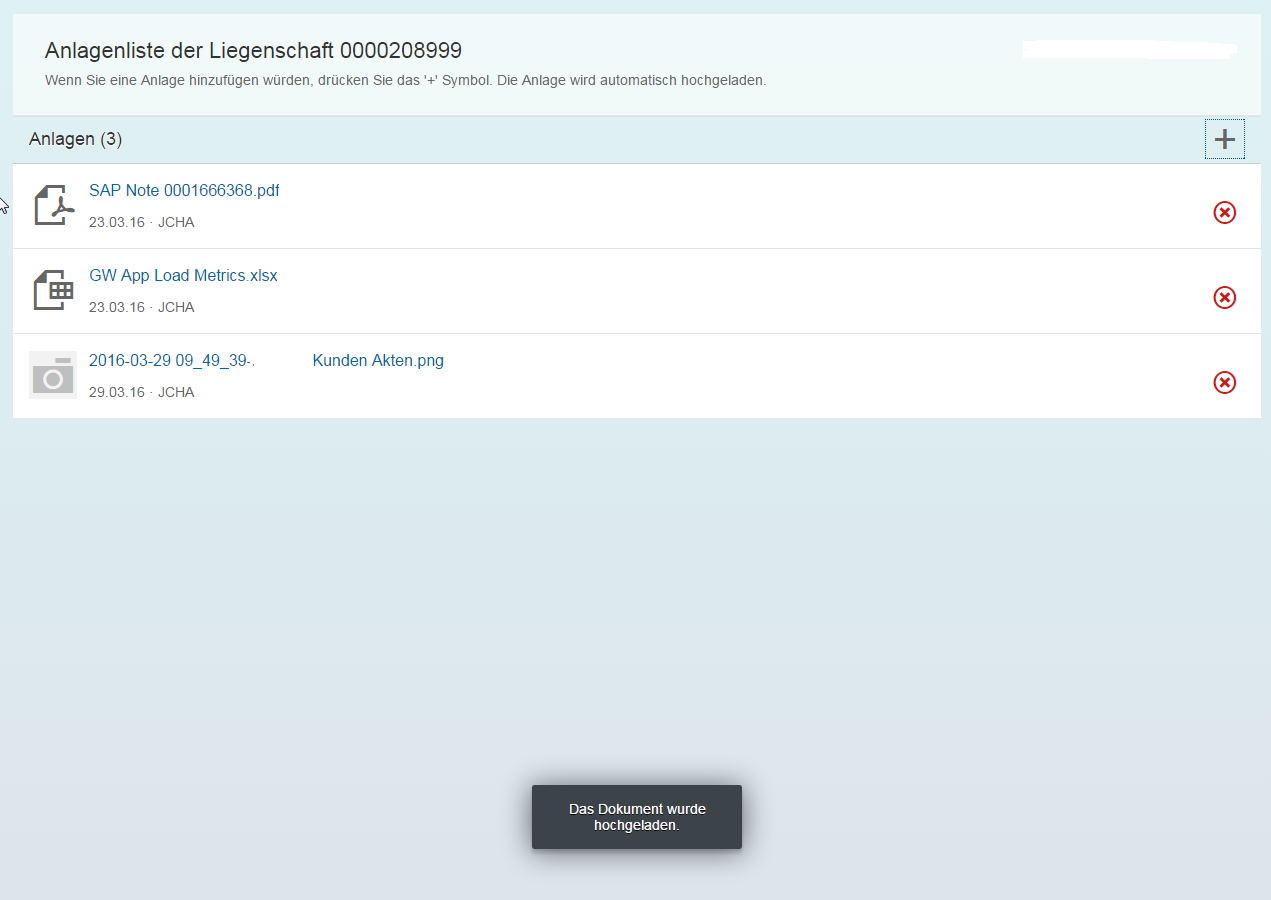 Here are the key events for UploadCollection:

So there you have it. A few tweaks here and there but now it functions quite well. I hope to see future improvements in this control, as it is quite a handy one, and I’d personally like the methods that are not allowed to be removed (why tease me with something I can’t actually use).

I hope this post has helped shed some insight if you are looking into the same scenario.