Will testing your workforce reduce fines in the event of a compliance error? 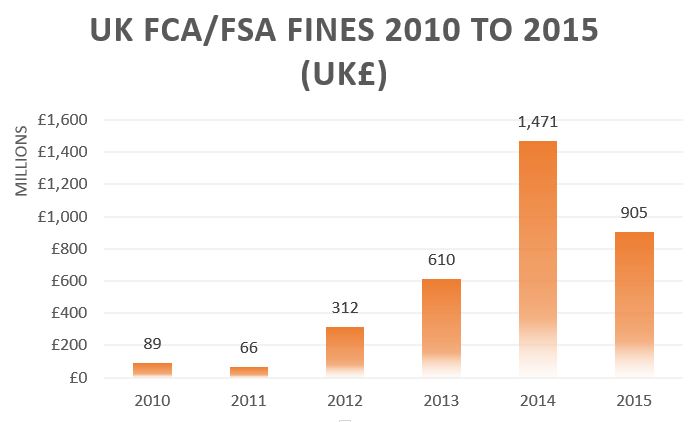 In the last few years, the regulatory authorities have “taken their gloves off” and companies face huge compliance fines if their employees make mistakes. The graph to the right shows fines by the financial regulators in the UK – with 2014 and 2015 fines averaging over 1,000 million pounds or 1,500 million US$ annually.

Suppose you test all your employees to check their competence with a system like SAP Assessment Management by Questionmark, will this reduce those fines? If a bank faces a fine of millions for money laundering and can prove, defensibly, that the ‘accused’ had passed competency tests, would that reduce or eliminate the fine for the bank?  In general, is it a defense against regulatory action that you took all the measures you could to prevent error?

The answer to this question varies by regulator and country. Sometimes a company will be liable for mistakes made by their employees even if they have done all they can to prevent those mistakes. But regulators do want to incentivize good compliance practice, and a good compliance program including regular competence tests will both reduce the chances of mistakes happening and for some regulators may reduce the fine.

The UK Financial Conduct Authority, which has issued the fines in the graph above does not say explicitly this, but does say in its Penalties Manual that fines should be increased if the actions are deliberate or reckless or if the breach resulted from systematic weaknesses in the firm’s procedures. Equally, if the breach was inadvertent and there is no evidence that the breach indicates a widespread problem or weakness, the fine might be lower.

Some regulators give clearer guidance. Here are three examples of regulators whose policies do say that a good compliance program will reduce fines:

1. The US Justice Department 2015 guidance to prosecutors specifically says that a compliance program can help stop or mitigate charges:

2. The UK Ministry of Justice guidance on the Bribery Act recommends communication and training around bribery and says that “it is a full defence for an organisation to prove that despite a particular case of bribery it nevertheless had adequate procedures in place to prevent persons associated with it from bribing.”

The biggest benefit of a program for competency testing for employees is that, in conjunction with other compliance measures, it will reduce the chances of an infraction in the first place. However, in the event of a mistake, having certified and competent people is not a “get out of jail free” card but if part of a professional compliance program, it will help with many regulators in mitigating financial penalties after an infraction.

thanks for the best one you have given, waiting for the next one,