Reporting (Almost) Live from My Incredible Week at CeBIT

Last week was my first experience at CeBIT – and if I have the chance to attend again, I hope I will never lose that sense of being completely awestruck. Everything about it amazed me, from its hugeness to the displays of technology that clearly showed me that the future is now. There were so many highlights that it’s hard to decide which ones to include here.

I was invited to attend CeBIT on behalf of my team, SAP Digital, with the primary role of sharing the excitement of the event with the world via social media. SAP’s presence was strong throughout the different exhibit areas, including Hall 4 and Hall 11. Scale 11, a special CeBIT exhibition in Hall 11, was devoted to startups, and that’s actually where the SAP Digital booth was located – one of the few established companies in the crowd. Isn’t that the very definition of disruption? If you think of SAP Digital as a startup within SAP, and consider that startups are among our key targets, that’s why the disruption makes perfect sense. In any event, my team had a fantastic and very busy time talking with visitors about SAP Digital and in particular, about SAPStore.com. And I’d like to think we presented our innovations with the same level of energy and passion.

People were genuinely interested in the solutions SAP has to offer for entrepreneurs. Check out these videos where we present SAP HANA Cloud Platform and SAP Lumira to two different startups. We showed how easy it is to download offerings from the store and demonstrated products like SAP Digital CRM, one of our most popular. (SAP Digital CRM is the new name for SAP Digital for Customer Engagement.) It was fun to see the reaction of people who didn’t know SAP has an online store!

One very entertaining startup duo I met at Scale 11 was Calumia. They had this original idea to literally “brighten up” your t-shirts: by attaching LED lights at the back of a regular t-shirt, any type of picture or writing can be shown on the front. Check out this short interview I did with them to see what I mean. CargoHit was another startup that pitched their business on the boat-shaped startup stage. As with everyone else, they had only seven minutes to present their unique worldwide platform built for logistics services. They did a super job explaining how the CargoHit platform increases transparency by directly connecting transportation providers, goods producers, and logistics service providers in one place.

As for me, I cheerily tweeted just about every hour of the day, and with a very cool new app, Periscope, even broadcast live videos using my phone! Here’s my live tour of Hall 4, check it out. You’ll get an idea of how impressive it is, and how massive. Something like 88,000 people visited the SAP exhibit areas during the week of CeBIT. How do we know that? Because there was a live heat map that used sensors for body heat to gauge traffic and count people within our areas. And maybe I’m biased, but the SAP presence on the show floor was so impressive, designed as little islands in an open way (rather than a traditional central area) that made it easy to interact with people. On Tuesday, we even had a visit from our German Chancellor, Angela Merkel, who seemed pretty fascinated by our connected city tour by SAP Executive Board Member Bernd Leukert. Who wouldn’t be?

We had a mini stadium with actual stadium seating in a U shape – it was incredible, like a live stadium experience. Then on a display screen, you could see the seats change color as they collected data: who is watching the game? Who has left momentarily, and for how long? You could also see how data is collected from outside the stadium – for example, how many cars are arriving and from which highway. The event planners can use these live data feeds in any number of ways, such as directing drivers to available parking, or to make sure concessions have adequate supplies. Brilliant!

And let me tell you about just more thing that I loved: the humanoid robot named Pepper. It was almost scary to see humans talking to a robot that seemed human itself, sometimes humorous, sometimes serious, but actually reacting to the emotions expressed by the person it was interacting with. Pepper even has some dance moves – honestly, just like science fiction.

What an incredible week I had, and I am so fortunate to have had this experience – and so glad to have all these amazing apps to be able to share it with you. Later this week, I’ll be blogging about more CeBIT highlights, so please stay tuned.

Federica De Monte is social and community manager at SAP Digital. Follow @federicademonte on Twitter or connect with her on LinkedIn. 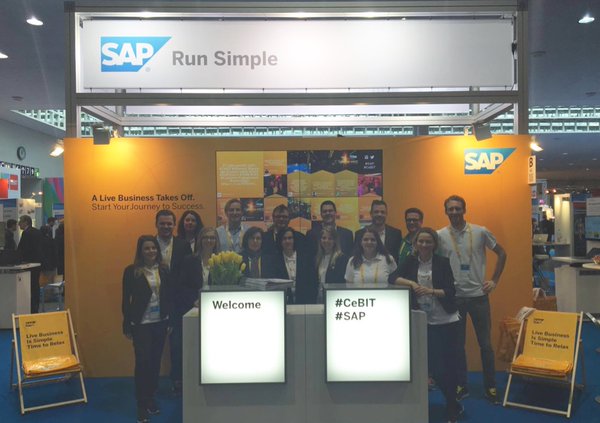