Bowling Over Our Customer – Advanced Analytics in Professional Cricket

There have been several people interested in how predictive can be put to action in the field of sports. I had an opportunity to work on a specific scenario in for the game of Cricket. This is a solution that was built for a leading cricketing franchise that was part of the Indian Primer League. If you are interested to further learn more about how predictive helped this cricketing franchise, read further…

The Indian Premier League (IPL) is generally regarded to be the highest-profile showcase in the world for professional Twenty20 (T20) cricket. This short, sharp form of the professional game is not only known for its exciting gameplay. The IPL is also renowned for its commercial success. During the sixth IPL season in 2013, its brand value was estimated to be worth US$2.99 billion.

The following year, in June 2014, the Kolkata Knight Riders (KKR) become the Champions of Pepsi IPL – and they did so in technological partnership with SAP Analytics.

The media buzz saw more than 50 print and digital outlets report of SAP Analytics’ involvement with the winning team. This was a significant branding achievement for SAP HANA platform and its predictive capabilities. It was also a proud moment for SAP Labs India — who handled the project — which I was lucky enough to be part of at the time. 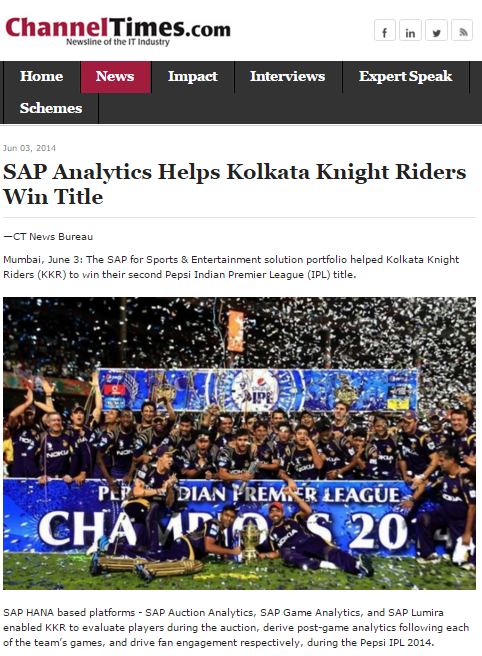 As a cricket-loving data scientist who worked on the project from start to finish, it was a joy to see how overwhelmed KKR were by the insights that our data provided. Many others in the industry were surprised by how the team had put our data to such effective use.

Truth be told, I was a little surprised at the outcome myself.

To my mind, data science is an art, and the predictive techniques and algorithms at its disposal are tools with which a data scientist can make new and innovative creations. However, a professional IPL cricket team had never before worked with the technology that we provided to KKR. We were not sure that it would give them what they needed to win.

Indeed, the road to success proved a rather bumpy journey, as you will see…

KKR’s need for efficient and insightful analytical tools were paramount –and this was months before a single ball was bowled.

The IPL player auction is an all-important precursor to the league itself. In 2014 it was held in Bangalore on February 12 and 13. KKR and the seven other franchise teams would compete fiercely to hire the best players for their game strategy. The stats were interesting that year. The IPL governing council pruned the initial list of 651 players to 514, including 219 capped players (who had played some form of international cricket). Among the 219 capped players, 169 were Indians and 50 overseas. This was also the first time in the IPL’s history that 292 uncapped players — with 255 Indian first-class cricketers — were auctioned. The cricketers were divided into 53 sets, each lists ranging from 8 to 10 players.

Considering the volume of auction data, each team had to perform a tremendous amount of analysis to understand which players to buy to suit their strategy.  At this point, the Kolkata Knight Riders (KKR), one of the IPL’s best franchise teams (and winners of the IPL in 2012), reached out to SAP Labs for help with the process.

I knew that this opportunity was going to be really big for SAP — but only if KKR was able to use the insights to become a team to be reckoned with after several years without success.

Subsequently, I was invited into a discussion at the office of Venky Mysore, MD and CEO of KKR. The MD wanted to know what could be done with the historical IPL data. Most important to him to discover whether we could use that data to provide analytics that would give KKR a competitive edge.

The first thing that KKR wanted was analytics that will help them pick a good team with their limited purse. According to IPL regulations, each franchise is allowed to spend on players a maximum of 600 million rupees (€7.5 million/$8 million). To assist the team during the Auction phase, we created a solution called Auction Analytics.

At the time, several media reports compared SAP solution for Auction Analytics to the systems described in Moneyball, Michael Lewis’s book-turned-movie about the Oakland A’s analytical approach to drafting new players in the NFL (National Football League, USA). However, I did not think that it was a true comparison. My goal was not to pick a team for KKR, but to provide enough information to enable KKR to make prudent decisions when purchasing players. More specifically, I wanted to empower them with insights and multidimensional analysis by using machine learning algorithms for selecting a team that suited their game strategy.

The strategy of the team was all-important. Each franchise has a definite game plan in mind – but the plans differ from team to team. Therefore, with future use of the system in mind, I conceptualized a generalized solution that all franchises could potentially use; one that would suggest specific sets of players to fit different strategies. 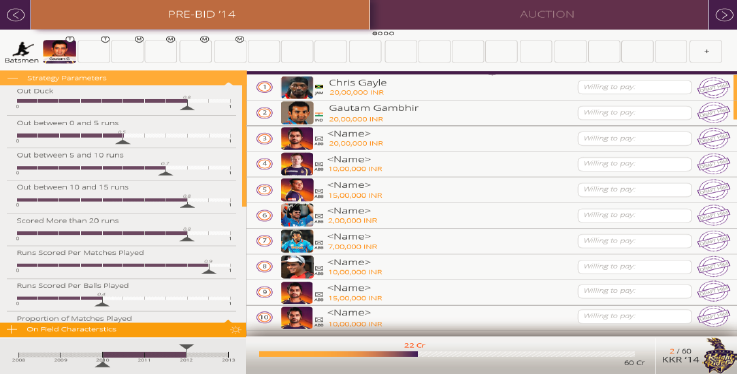 The solution conceived in Auction Analytics has two parts: Pre-bid and Live Auction. The Pre-bid part allows the franchise to analysis the players based on data. The management would choose a “dream team” made up of the ideal players that they would like to bid on and purchase at the auction. Of course, during the Live Auction, it was not a given that any player shortlisted for the Pre-bid team could be bought by KKR. The other franchises were bidding for them too – and very competitively.

As you can imagine, bidding during a live auction is an extremely fast and loose process. Pressure builds up on the franchise when they lose the key players that they had identified to other franchises during Pre-bid phase. After which, teams can get in trouble when the tendency to make unrealistic bids occurs. To help the franchise to handle this pressure, we added several features. They included Compare Players and Find Similar Players. This design preserved the team strategy that the franchise had while they picked their “dream team”, or the next best replacements, during the Pre-bid phase.

At the end of the auction, KKR succeeded in getting the team that they wanted. Therefore, it looked like Auction Analytics solution had been a success. Indeed, before the 2014 league began, many rating agencies regarded the KKR as the team that was the most value-for-money. KKR had a good mix of players — bowlers, batters, gatekeepers, and so on — which made the team look good on paper at a highly reasonable price.

Next came a bump in the road. When the Pepsi IPL 2014 began on 16 April 2014, the KKR team started with five-game losing streak.

While this was happening, I was working on Game Analytics. This was our solution to help the team process the large amounts of information that could be captured during games. In particular, I was looking to find natural pressure points that lead to specific events that occur in a cricket match. During this time, with the team losing, I began to feel the pressure myself. The series of losses led some people to think that Predictive Analytics is not usable for cricket, due to the amount of potential factors that could change a game.

In the solution that I conceived, I was dealing directly with those many in-game factors. Captured in the solution’s cricketing data is the important information which describes each strategy that a bowler uses to bowl to the batsman. For that event alone, the solution provides the following metadata:

Importantly for the game, Game Analytics was able to extract features which describe the build up to the occurrence of an event of interest, such as the sequence of events prior that lead to a major occurrence such as a wicket fall and the batsman being bowled out.  Similar insights could be retrieved for various other events of interest like, an increase in required run rate, low scoring overs, run outs and so on.

The ability to see the pressure building during a match was a significant insight for KKR. To find meaningful insights in the data, we used Machine Learning Algorithms concepts like clustering, and Rule Mining on Moving Window Time Series.

In the case of Rules Mining, the rules were presented as a tag cloud. The size of the word tag indicated its significance: the larger words were key influencers that captured one of the pressure points that leads to a wicket fall.

This insight was derived dynamically for each player. We analysed multiple aspects of the players like big hitting capabilities, consistency, bowling economy and so on. Also there were several filters applied against a team, against a type of bowler, against specific bowler and so on. This was used to train and coach the team players. It helped them to understand their blind spots while they are playing the game. Based on the data, the management could strategize a game plan for how to play each situation during the game.

Thankfully, when SAP solution for Game Analytics was up and running, the team started to win again and eventually became champions. We had reached our destination – and travelled further than we had imagined. Not only had we successfully implemented the solution for a franchise team, but we were a complimentary part of the winning team. Our solution enabled KKR to validate their decisions for strategizing better.

Of course, SAP Labs India and I claim no credit for the KKR win. The full acclaim goes to the hard work of the players and the team management. However, it was nice that our SAP solutions were graciously acknowledged afterwards.

Both Auction Analytics and Game Analytics solutions were built on the SAP HANA platform. We took advantage of the in-memory computing which provides real-time analytics, transactions, and predictive and spatial processing. The processing speed of SAP HANA means that large amounts of information can be handled in a fraction of time. The Predictive Analytics capabilities on the platform were ideal to capture the type of information that the KKR required to improve their team. In providing the solution, we used the native predictive analytics capabilities and other algorithms in SAP HANA to look at player performance and present it to the user.  Users have the flexibility to give more importance to a particular trait based on his requirement for the team. The application is a HTML5 application that is hosted on the SAP HANA platform itself. HTML5 is used so that this can run on multiple devices like the tablets, mobile phones, and desktop com