This Document describes the Contract Management Solution in SAP ERP based on Netweaver Folder Management module created by a team of FITCON LLC (Russia, Moscow).

Even in today’s digital age, legally binding contracts between business entities usually are in paper, require approvals, signatures and represent value. They have periods of validities, require explicit action for renewals or cancellations – usually with a thought given ahead of time of action. It is all about compliance!

SAP stores contracts related to the various business processes within their specific modules: SD, MM, RE-FX or with financial transactions, in TRM. They are disparate in the sense of: There is no central registry for contracts within SAP – contracts are “islands of information”.

Our solution is different. It takes into consideration, that contracts should be managed centrally and in accordance with records management requirements:

Figure 1. Example of User’s Workspace: a Menu on the left, a Contract Card in View Mode (showing linked documents) 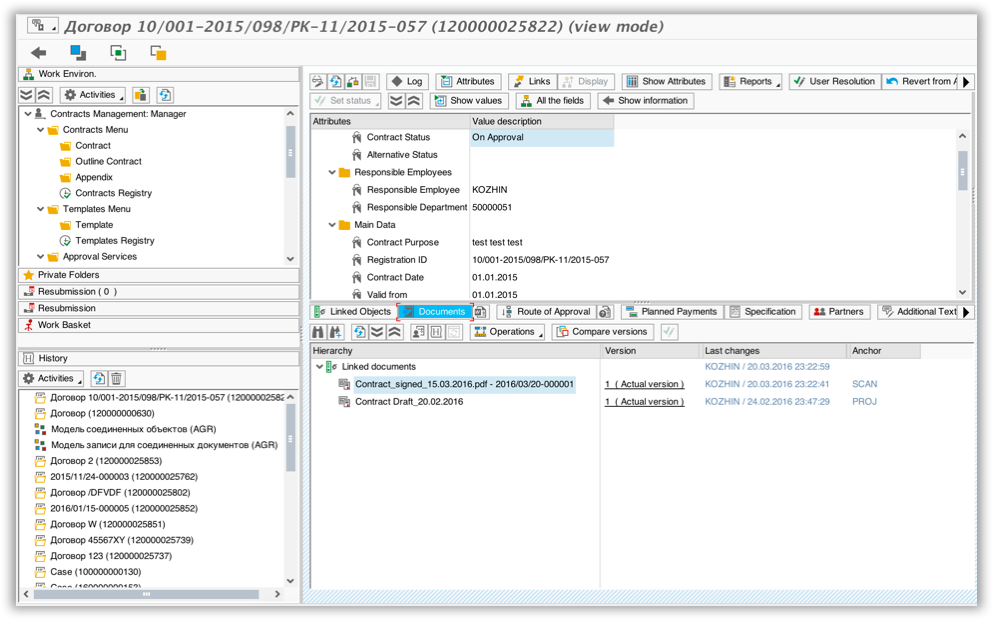 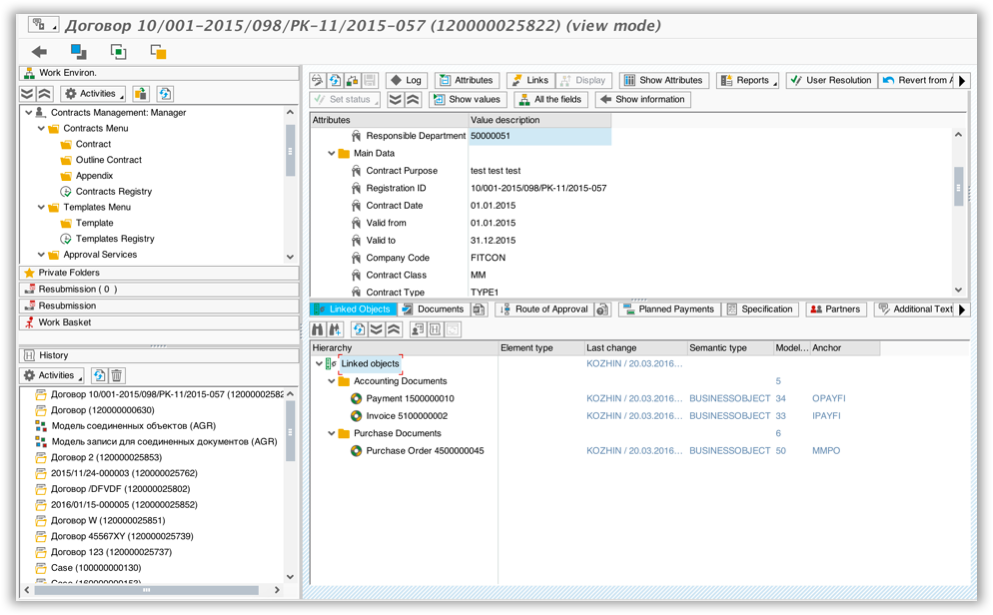 FITCON has built, implemented and enhanced this solution over the past ten years. It is sound and stable, inspired by business requirements and tailored to meet them. Successful implementations with clients in Russia, such as Transneft, Sberbank, Bashneft, IES Holding are a proven track record.

Scheme of typical contract lifecycle which is covered in our Solution is following: 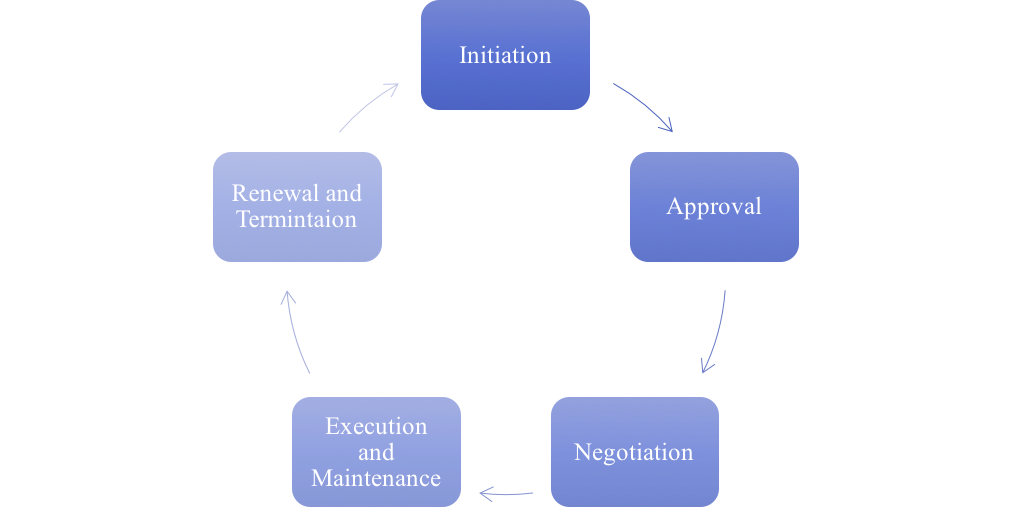 Basic tasks on the Initiation stage include:

As we want in our Solution to closely integrate Contracts with other SAP ERP Objects, we suggest also to create MM or SD objects like Purchase Orders or Client orders at this stage. What is more important, we suggest to create these objects right from a Contract card, so some data (like Business Partner, dates of validity, types of contract) could be copied to relevant SAP ERP Object. Also one of the results of this operation is a connection between, for example, a Purchase Order and a Contract.

When everything is ready, it’s time to determine a route of Contract approval and start a workflow. We think that it’s more convenient not just to enter a route according to some manuals, but to determine it automatically by looking up some key data in our Contract card (see Library of Approval Routes section).

But before starting workflow we still have some things to check. Basically, it’s something like:

Our Solution has an ability to customize and extend these checks by simply implementing and setting up Your own checks. And it’s simple as it sounds: You code Your own checks using our template for checks and set up in our settings, which are provided with the Solution.
Also, it is worth mentioning that as we have a Purchase Order (PO) linked to our Contract, as soon as we set a Contract’s status to a “On approval” value, a PO status should be changed too. And we do it automatically – we block PO so it is impossible to change its data during the approval process. For making changes if necessary, a Contract Card should be sent back on revision to a responsible User. New status “On revision” also automatically opens up a linked PO for changes.

Some steps of Contract Lifecycle are still more often to be carried out not in SAP ERP system, but in the most common way – using E-mail and delivery services. One of these steps is the Negotiation stage which includes following tasks: 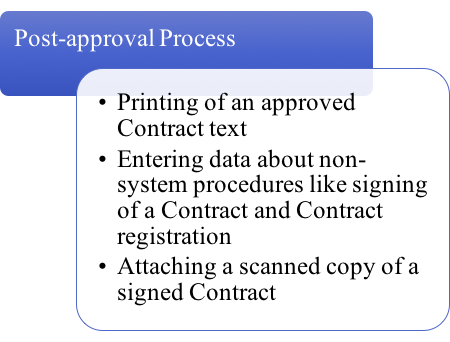 Nevertheless, this actions can also be carried out from SAP ERP if there is an integrated EDI solution (in this case, Contract Data will be represented by a XML-file and a Contract will be signed digitally).

Speaking of our linked Purchase Order (PO), at the very moment when status of our Contract will become “Signed” or “Registered” our PO will be released automatically.

Execution stage consists of operations which are carried out during steps of common business-processes in MM, SD or FI:

What is different – as we have SAP ERP Objects linked with out Contract Card, all these operations can be seen in a Contract Card – as a new linked objects or as a special in-contract report about incoming deliveries or outgoing payments. It’s all was made possible via extensions which we have made in Open-FI and MM, SD.

As a part of Contract Maintenance, we have done such things as:

And as I have mentioned before, all this stuff can be extended by Your own functions and checks using ad-hoc settings in our Solution.

We have decided to have two preconfigured approaches of carrying out operations of Contract’s Renewal or Termination:

In this document I will cover only a “complex” approach. According to this approach, a User, responsible for a Contract termination, for example, has to create a new Card from a Contract card which is called “Request for approval” (or simply, Request).

This Card looks almost like a Contract Card, but of course, they are different in attributes. The attribute list of a Request is much smaller and consists only of following attributes:

Then the process is almost similar to a Contract approval:

When all responsible participants make up their minds with necessary decisions and enter them in the Request Card, the state of the Request card will be changed (respectively to the decisions made):

As the Contract Management solution is based on SAP Folders Management module, the main user transaction is SCASEPS and it looks like this: 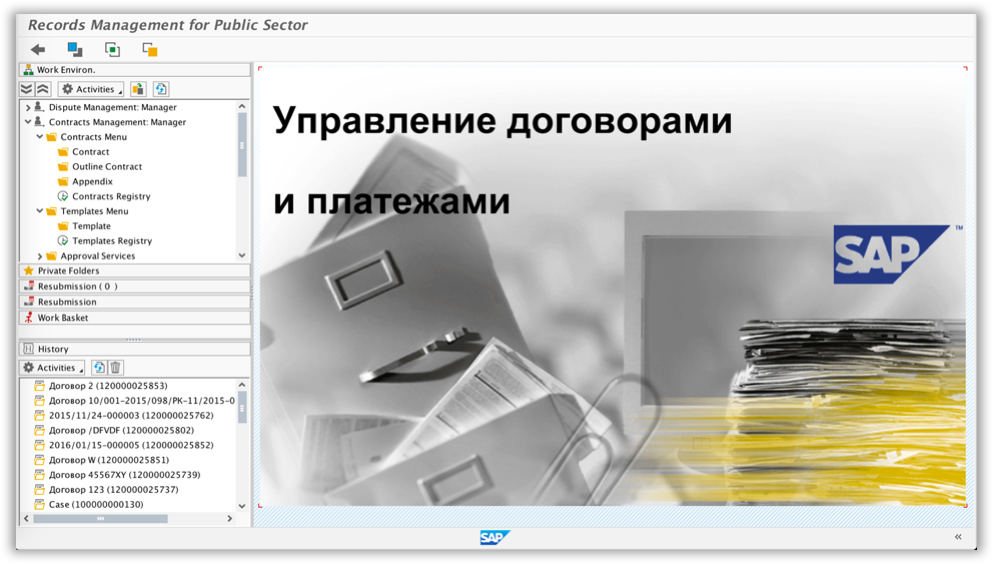 This is a main workplace for a User, responsible for Contract Management. Here he can execute following functions:

A Contract is a card (or case) in SAP ERP which looks like this: 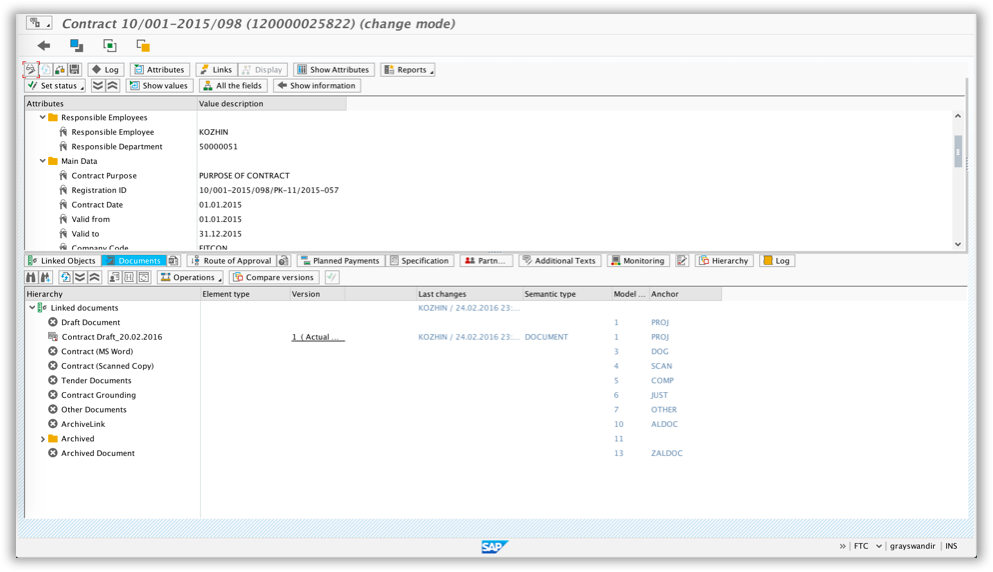 A card has following elements, which will be described further:

Contract functions are the actions available depending on a current state of a Contract. These actions can be carried out by aUser (if he has necessary authorities). For example:

In our Solution this actions are dependent on current state of a Contract card and User’s authorities hence some buttons are made invisible to a User. As an example, the Function “Create an Appendix” is available on a toolbar only if a Contract Card has the status “Signed” or “Registered”, or the Function “Initiate Contract Renewal” is visible only to User who has the rights of performing further activities for the Contract.

In order to avoid a bulky interface, many functions are organized as separate Menu Buttons like “Actions”, “Decisions” and so on. It’s a standard functionality of NWFM module of SAP ERP. 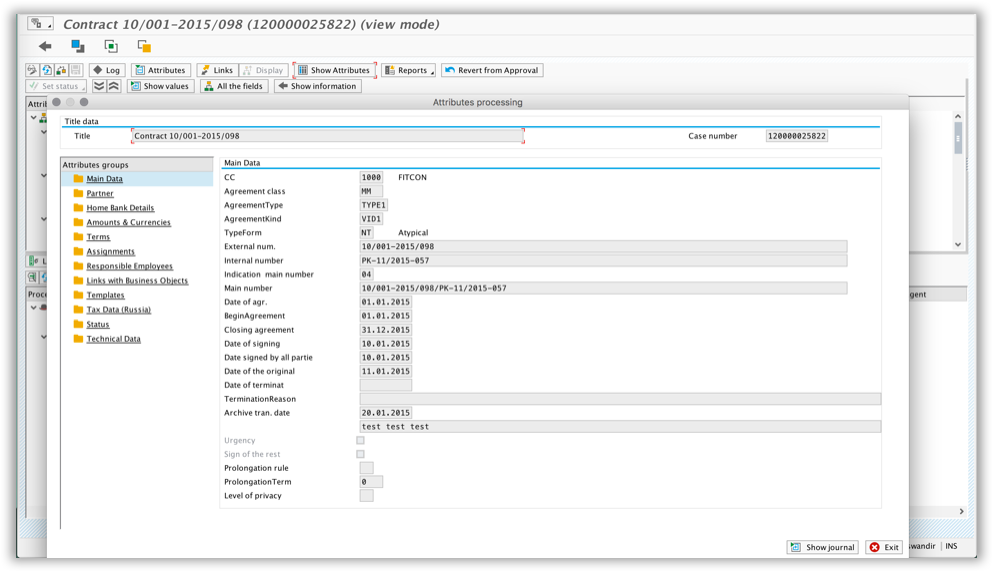 To open attributes in Screen mode one can use the Function “Show Attributes”, located on the toolbar of functions. All attributes that represent contract data are grouped and organized by tabs:

Some more details about attributes:

A Subcomponent is an additional Tab in Contract which is used to show or maintain some additional data for the Contract. For example:

In order to avoid manual construction of approval route for each new contract we have come up with idea of having a whole Library of Approval Routes, where routes could be maintained and assigned to each business case according to a special key attributes.

The transaction for maintaining the Library looks like this: 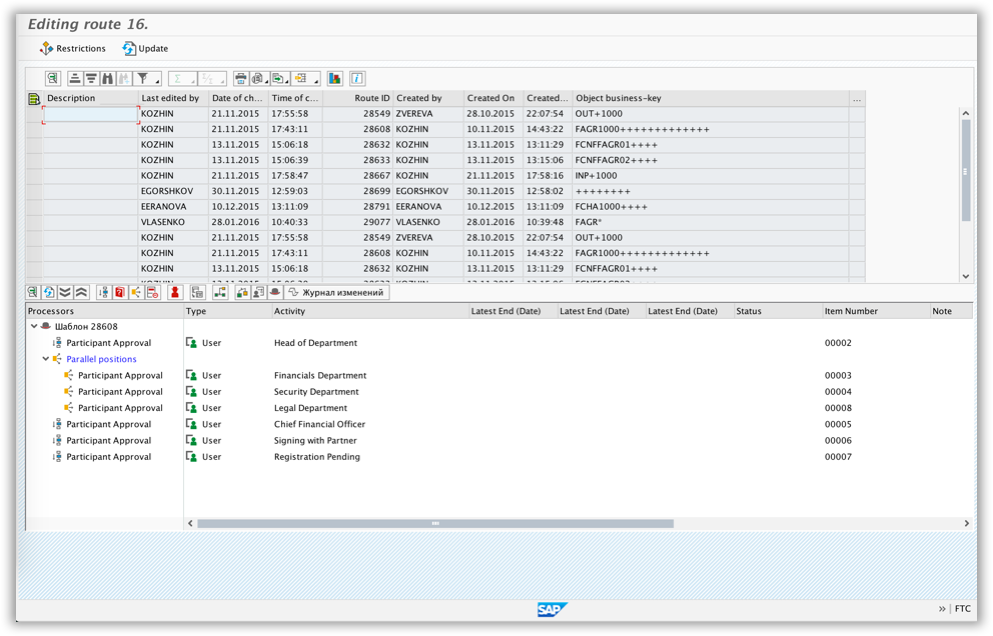 In the top we have a list of routes and their basic data (including heading text and key attributes). In the bottom we have an overview of one of the routes (as it looks like in Contract and how workflow goes during Approval stage).

Selection of route in Contract is carried out in subcomponent “Route Of Approval” by pressing button “Load Template”:

If the system is unable to determine the only one route of approval for current Contract (according to its data) then the system will show a list of possible routes, that are the closest match.

This standard User transaction is used for Contract Approval. Here User can overview how many approval tasks he has and can also execute them: Execution of task opens a Contract card with new function available – “User Resolution”, which is user to Approve or Reject document. 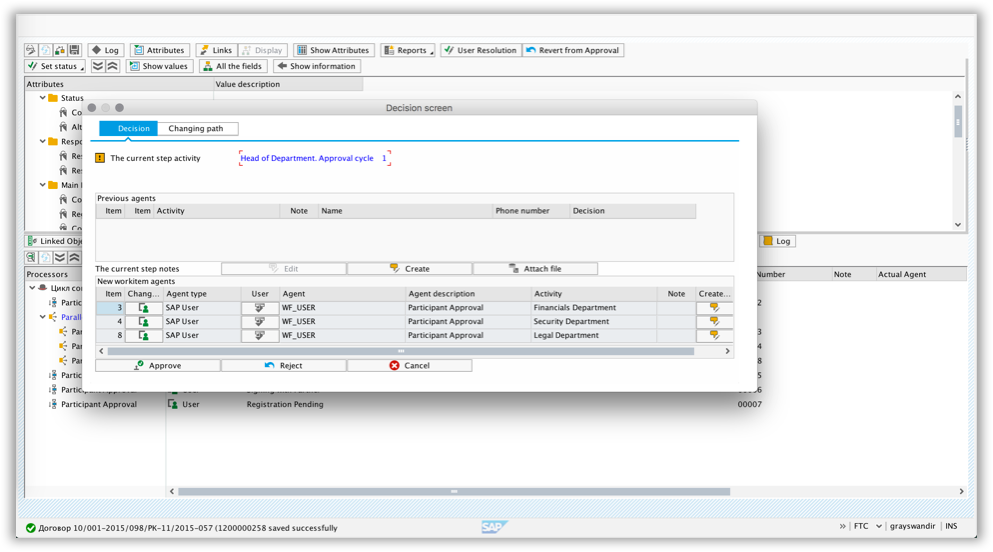 A participant of Contract Approval can’t reject a document without creating a note with reasons of his resolution.
Each resolution and created notes will be displayed in Subcomponent “Path”: 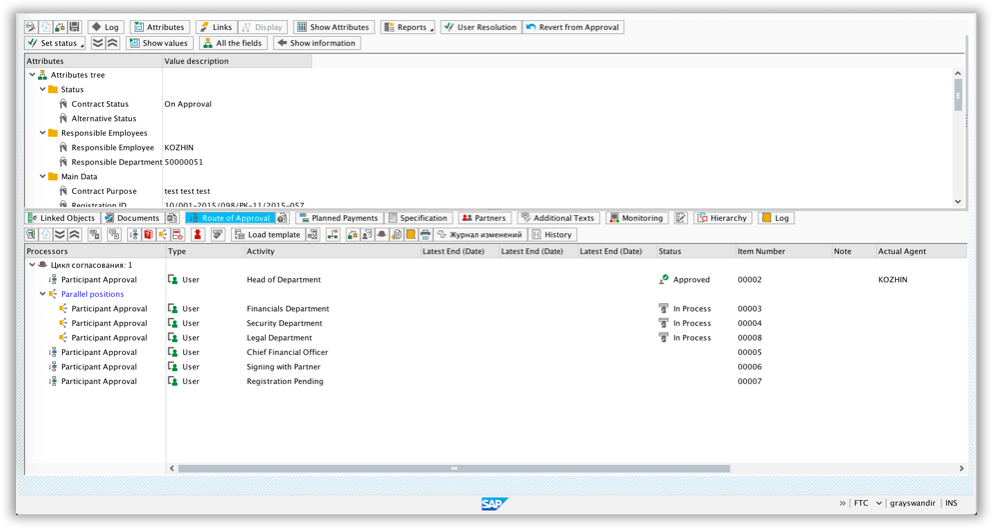 Also, in this Subcomponent user will see a history of approval as this process, in common, can have many iterations and systems saves details of each iteration. So it’s possible to view participants and their resolutions on every round of approval.

Transaction SCASEPS is a quite convenient place to manage and maintain Contracts in SAP ERP, but all we know, that many other ERP users are also interested in viewing contracts data. So, we have created a transaction for such users called “Contracts Registry”, which allowed them to select and view Contracts according to their authorizations in ERP system.

This transaction has a wide range of selection criteria to search for Contracts in the system and it shows results of the search as a list of matched Contracts. 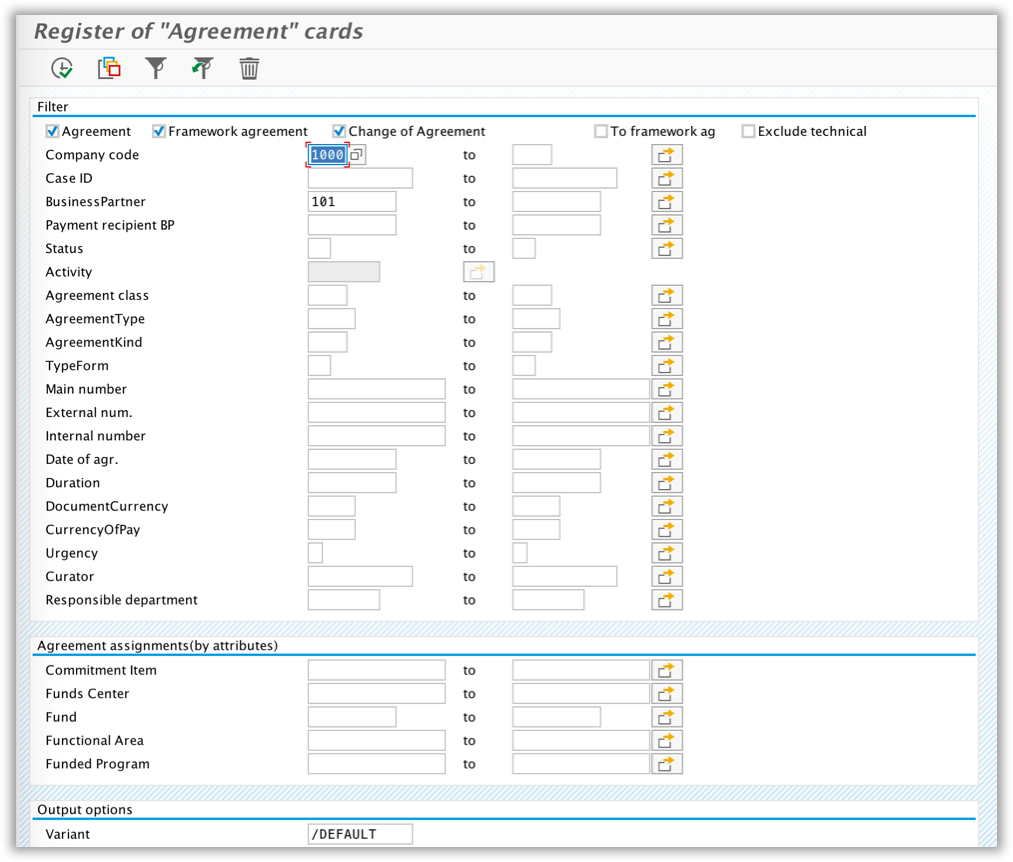 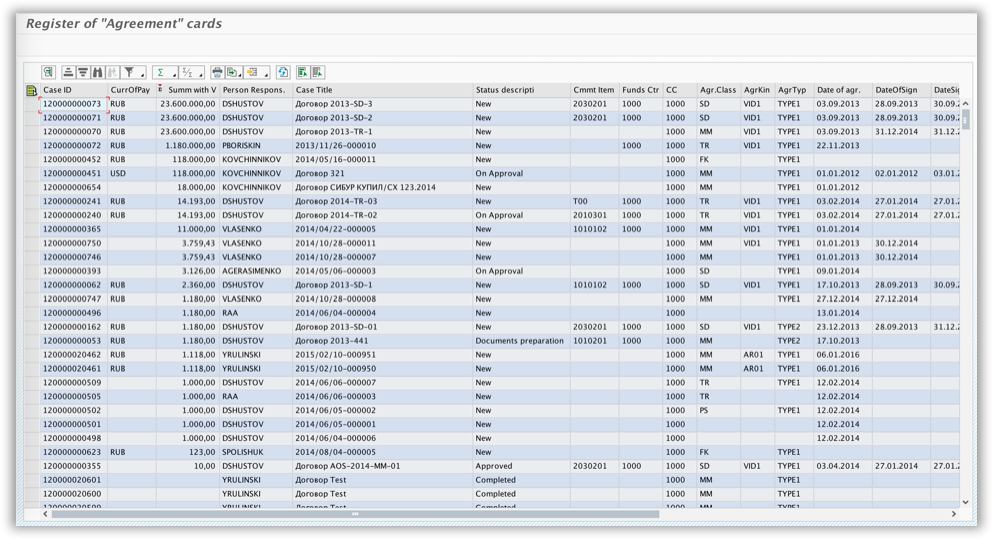 A User can drill-down into selected Contract and view it as if he was in SCASEPS.

For some projects Contracts Registry, of course, had some extensions. For example, it had Favorites Lists or even was used as an entry point for Contracts – on the toolbar of the transaction a few buttons were placed:

User used this transaction as his main workplace to manage and maintain Contracts he was responsible for.

How are Contracts linked with other ERP objects?

It’s essential for an ERP system to have processes and all objects within this processes to be linked to each other. For example, a Purchase Order is linked with Invoice and Invoice is Linked to a Payment. Contract is the object, which could be used to consolidate all data existing within ERP system and related to a particular contract: orders, deliveries, invoices, requests for payment, payments. In order to provide this approach, a Contract from Folders Management has to be linked with other ERP objects.

It’s worth mentioning that every SAP object from the table above has additional Generic Object Services to:

It’s also possible to change the “master” or “primary” object and start creating Contract Cards from SAP objects (for example, from Purchase Order) – it depends on specific requirements and demands of business-process.

P.S. If You want some more details or have any questions, feel free to ask me.

Hope You liked it! 🙂