When integrating SAP Cloud for Customer (C4C) with the customer’s on-premise landscape, the direction from the cloud to on-premise is the most critical in regards to security. It is best-practice to not directly expose the business systems (ERP, CRM) via the internet as they contain mission-critical business data. To secure the customer landscape and setup, SAP has proposed a reference architecture described in the Technical Connectivity Guide. Its major component is the so-called “Reverse Proxy” (RP) which acts as a gateway and single point of entry into the customer landscape. The RP terminates the HTTPs connection originating from the cloud and sets up another HTTPs or HTTP connection to the internal business systems (ERP, CRM) or the middleware (SAP PI). The setup of the SAP Web Dispatcher, SAP’s own RP product, is described in detail in this blog.

For integration scenarios which are mediated via SAP HANA Cloud Integration (HCI), connection to the customer’s on-premise landscape can also be setup via the SAP HANA Cloud Connector (SCC), an on-premise agent running within the secured network of the customer, as an alternative to the RP. The SCC sets up a permanent SSL tunnel between the HANA Cloud Platform (HCP) and the demilitarized zone (DMZ) of the customer, routing requests to the attached business systems such as ERP. Major advantages compared to the traditional RP setup are:

The following picture provides an overview of an integration architecture based on the SCC. Details can be found in the Security Whitepaper and the Cloud Connector Operator’s Guide. 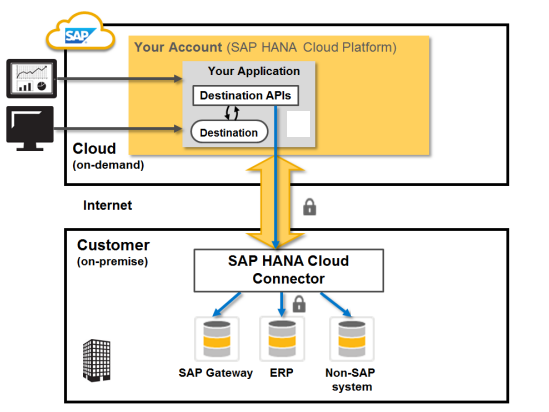 The setup of the SCC is described in detail in the SAP HANA Cloud Documentation. The most important steps are:

2. Set up connection between SCC and HCP:

– Set up connection between SCC and HCI

3. Set up connection between SCC and on-premise backends:

In addition to the setup of the SCC, the IFLOW on HCI side needs to be adapted in the following way:

Once these configuration steps have been performed, data can be sent from the cloud to the customer’s on-premise systems via the SCC.