When the phrase “Internet of Things” was coined, probably in 1999 by Kevin Ashton of the Auto-ID Center, it was mainly about RFID technology and the early Internet impacting supply chains and logistics. In parallel, Neil Gerstenfeld talked about “When things start to think” while he was at MIT Media Lab. This can be read as an early take on artificial intelligence, or on IoT – or both. Around the year 2000, it somehow felt right to assume that things would follow humans into the Internet and that those things might be smart.

IoT is now 15+ years old and at an inflection point. It is entering a second wave, which goes beyond connected things, and enables companies to become live, digital businesses. From medical devices in a hospital to fan experiences in a football stadium, IoT is enabling a seamless, real-time experience of all interactions that we have in private and professional life. The IoT scenarios on display at CeBIT2016 provide compelling examples. 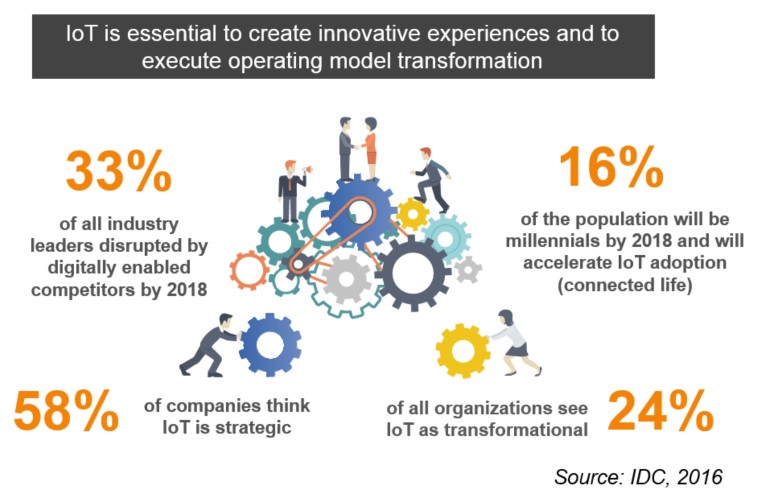 IoT is Changing the Business Rules

In a new IDC study sponsored by SAP, “IoT and Digital Transformation: A Tale of Four Industries,”it is clear that IoT is at the center of the transformation. According to IDC, the IoT-facilitated digitization threatens many current business models. If we take a look at some of the disrupted business models in the ground transportation and hotel industries, as initiated by Uber and Airbnb, we clearly see that IoT enables customers to bypass many of the traditional barriers and get connected to services more directly.

Taking out some links in the traditional value chain will create problems for many companies. IDC estimates that around 30% of all industry leaders will be disrupted by digitally enabled competitors by 2018, and 58% of organizations worldwide see the Internet of Things as strategic to their business. Another 24% of organizations see IoT as transformational to their business.

IoT is Reshaping the Industries

IoT is poised for rapid growth across a wide variety of industries that are connecting physical assets. According to a story in Digitalist Magazine’s Executive Quarterly, companies are ramping up their IoT investments rapidly, which can be seen in seven major industries with high levels of physical products or assets (you can download the infographic here).

IDC forecasts that IoT spending will increase 19% on average through 2018. Some industries, such as discrete manufacturing, have already invested significantly; others, such as healthcare, have spent less to date but are expected to expand quickly. In its whitepaper, IDC examines how quickly four industries – healthcare, retail, consumer products, and discrete manufacturing – are adopting IoT.

Think Live to Get the Most Out of IoT

The value of IoT lies in creating a data exchange between parties that have not been connected before. As we are talking about people, machines, and devices acting on different levels of sophistication, data must be combined from various and diverse resources.

Truly, new insights will be generated only if IoT is combined with the necessary analytical skills, as IDC points out. What the Internet has been to RFID, in-memory technology will be for IoT. The combination of IoT and real-time analytics will create a world of live business operations with seamless customer and consumer experiences. We are not there yet, but we are already on the way.

Hyperconnectivity is promising a lot, but someone has to be in charge. To explore how the IoT is redefining IT and the role of the CIO, see Who Will Lead Development of the Internet of Things Inside the Organization?

This article originally appeared in the Digitalist Magazine.