25 Years and Counting: Why SAP is an Employer of Choice for Frank Lukens 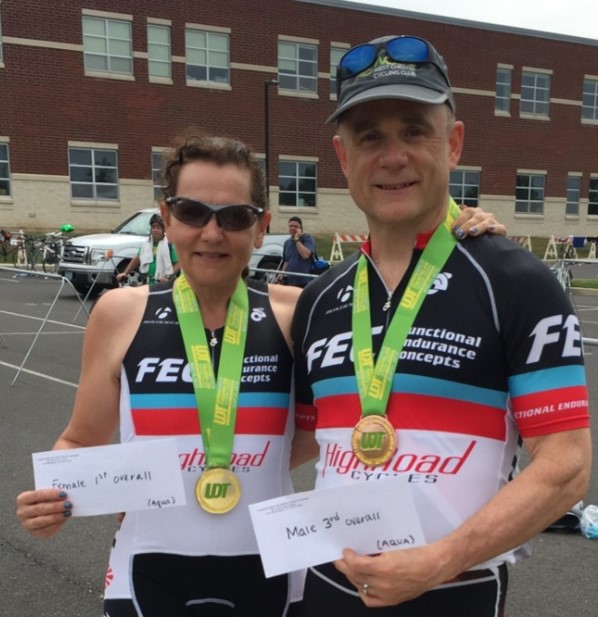 Frank and wife Monika after last year’s Aqua Velo, “a triathlon without the run.”

Applying his training as a mechanical engineer, Frank Lukens’ twenty-five year career at SAP has focused on the technical side of business and on customers, whether internal or external. But that straight and narrow path ends at the corporate doors. Find out why this amateur HAM radio enthusiast (you will want him on your trivia team if a Morse Code question comes up), motorcycle rider, competitive swimmer and cyclist, and sometime volunteer paramedic considers SAP his employer of choice.

What is your current role?

I’m with the Training, Demo and Consulting Group, and have been in this role for about two years. We support our internal training, demo and consulting systems, hence the name.

What brought you here?

After eight years at my previous job, I literally picked up the paper, looked at the want ads and read one for a customer support role at a software company I had never heard of. I applied only to get the interview experience. Waiting in the reception area, (SAP only had a portion of one floor of the building at the time), I looked through the books describing what SAP was doing with R/2 and remember thinking: There’s no way I can do any of this. My work to that point had not covered much of mainframes – I was a PC guy. I stood up to walk out the very moment my interviewer walked down the hall to meet me. Multiple times he asked about my compensation and replied, “Is that it?” I was intrigued. Even more so when another interviewer (who would become my boss) noted my suit and tie, smiled and said, “We don’t wear that around here.” After an honest brief discussion about my technical experience with many things except mainframes, I was hired.

How many different roles have you had?

There have not been many. The one thing I learned from my father is do what you want to do, do not just climb some ladder. I was clear on two things: I did not want to be in management and I did want to stay on the technical side, which I did, first in consultant roles on R2 then R3, and then into customer support for the big Y2K fiasco that wasn’t. Eventually, I was part of Active Global Support’s Center of Expertise database team, which evolved into a lead role for me. Customer support has been the common thread, and the difference with the work I do today is my customers are internal to SAP. For example, I work with sales teams to make sure they have the latest and greatest software running for their customer demos, and have helped them generate $1.2 billion in sales!

Did you ever consider leaving?

Oh, yeah. About twenty years ago, I had a great rapport and friendship with my then boss. He moved to a higher position, which made his wife, who was our co-worker, our manager. This shift caused no small amount of issues, and devolved to a point where HR was involved and performance plans – mine — were established. Then, of course, I was looking elsewhere. Eventually, everything worked out, although I am not sure if the performance plan was removed from my HR file. Since then, I have chosen SAP for two reasons. First, my work at many customer sites has allowed me to see ‘behind the curtain’ and compare their culture to SAP’s; I wouldn’t want to work for any of them. Second, we are unique. No company out there is a direct competitor to SAP. No one has the full breadth of products that we have, nor the integration.

There have been plenty of changes to technology, strategy…is there anything you would like to see us return to?

In R2 days, we were a software company and sold appropriately. I recall a large customer wanted R2 with a mainframe DB2 database. Because of the software’s complexity, our rule was we would not sell that version unless the customer had another production application already running on DB2, which they didn’t. We walked away from the deal. Weeks later, they came back and agreed to buy the necessary version. In my view, today we are a sales company, and I don’t see us returning to anything else. The upshot is that sales-driven approach has placed SAP around the world, and that has positive impact. Now we have to make it work.

What was the culture at SAP like when you joined?

When there was a sale, and remember, we were a small group of people occupying half a floor of a building, they rang a cowbell, which meant there would be bottles of champagne in the lobby! For me it felt right. We were doing good stuff that customers paid a lot of money for and we worked hard; we did whatever it took. That hasn’t changed really, at least not for me. The champagne is gone though.

What advice would you give someone whose first day at SAP is today?

Except for a couple of years over the past 25, I have enjoyed working at SAP. I’m proud to work here. You can do anything. Enjoy the ride!