This article is helpful for Consultants in SAP MM specifically working in procurement Area.  The document mainly deals with the analysis of the behaviour of SAP system when three different configurations in SAP MM such as Version Management, Release strategy and Output messages are in place.

Prabhullachandran R, a SAP Certified Materials Management Consultant has total 10 years of experience out of which 9 years in SAP consulting in Procurement, Inventory Management and Country India Version. He has got expertise across various industries such as Construction, Pharmaceutical & Manufacturing sectors. Throughout his career he has gained sound knowledge by working in Companies like IBM, TCS, RP TECHSOFT, and COLLABERA.

Scholastically he has secured first class in Master of Technology in specialisation with Production & Industrial Engineering under Mechanical Engineering Department of Mahatma Gandhi University, Kerala.

Pre- Requisite for the Analysis:

Overview of the Analysis:

This Document depicts about the behaviour of the SAP system or how the integration works when a combination of three different customisations with in SAP Materials Management such as Version Management, PO message settings and Release strategy configuration are in place. The Document reveals how these different settings complement each other while Create or Change or Release or Output a PO.

Create a Purchase order through the transaction code ME21N.

While creation Version Number = 0 and in Completed status. No need of activity in Version tab when the version = 0 as subsequent versions meaningfully occurs only when the document is released.

Messages will be automatically generated as the condition records were maintained correctly in MN04 transaction code.

Triggering of new versions and Cancellation of releases will be applicable in PO based on the nature of changes and when the changes are happened.

Case 1: Change in PO quantity to a higher value, after PO fully released and before the document gets outputted.

Through the transaction ME22N, Quantity changes from 10 – 12 PAC 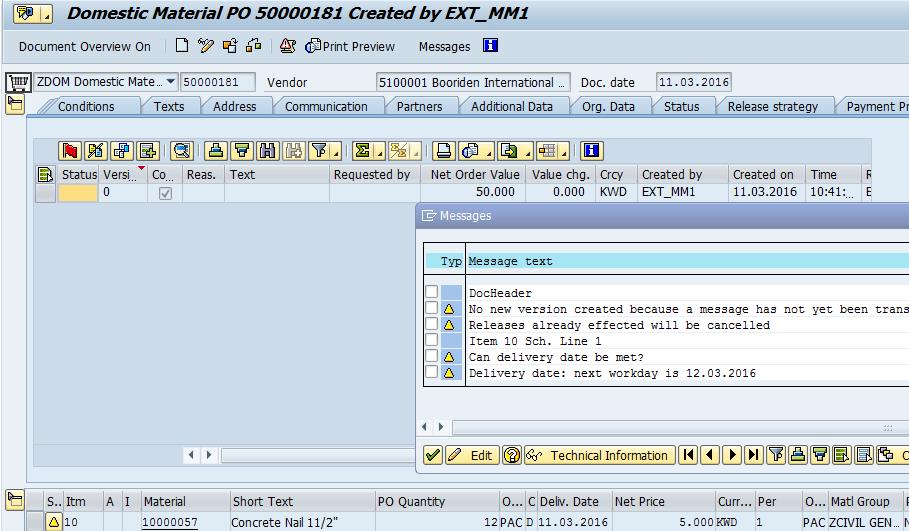 Case 2: Change in PO quantity to a higher value, after PO fully released and the document gets outputted.

Through the transaction ME22N, Quantity changes from 12 – 14 PAC 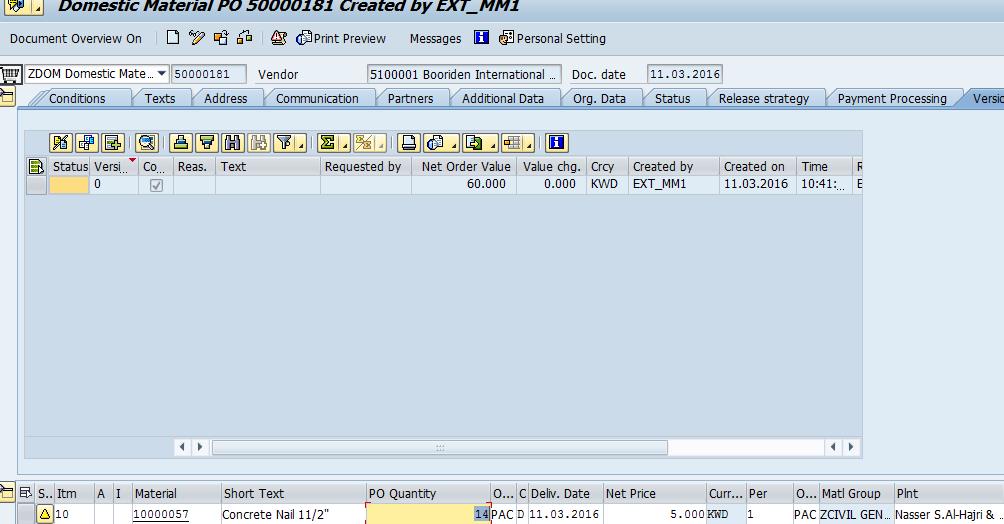 Then following messages will popup 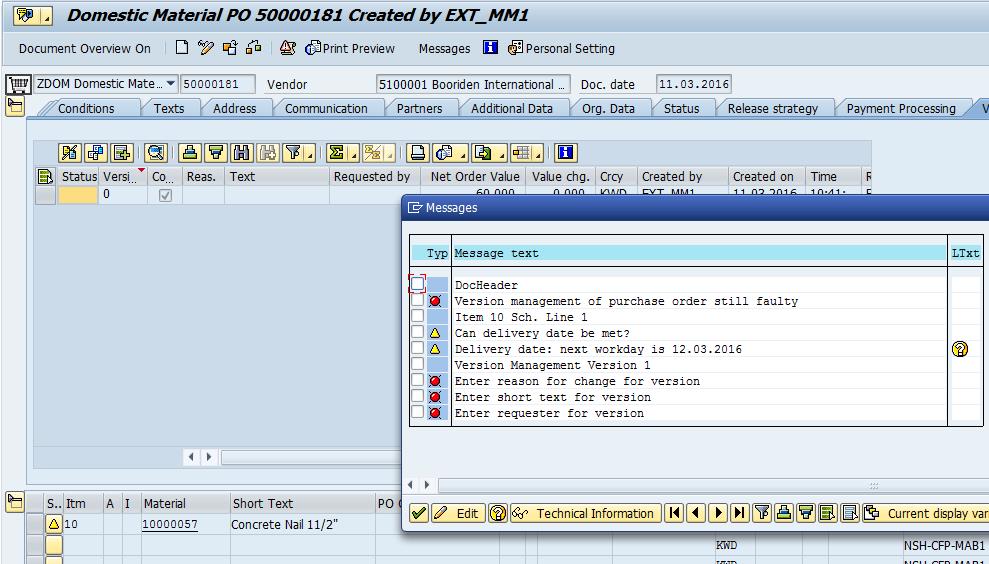 System will propose for new version.

Even though Quantity and subsequently value got raised, existing release will not get cancelled until the version completed indicator is ticked manually for the latest version.

Once the Version Completion indicator is checked, Click on

the following messages will popup. 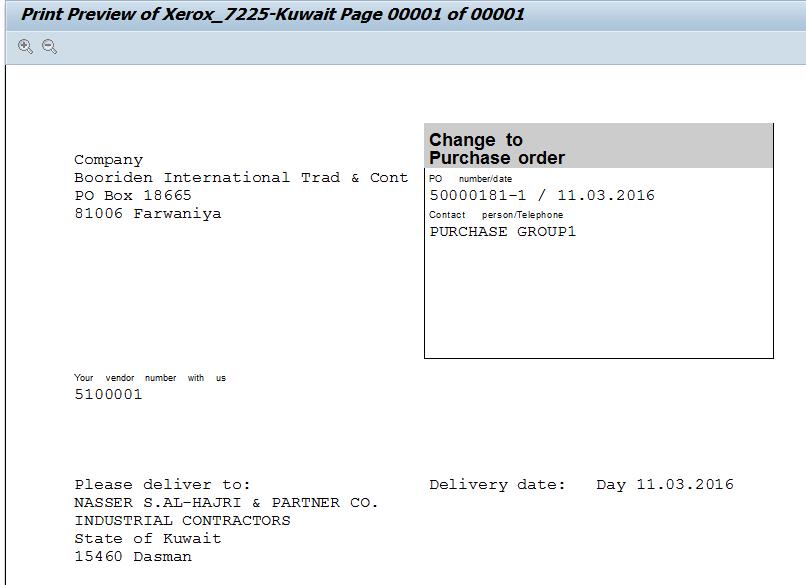 Case 3: Change in PO quantity to a lower value, after PO fully released and the document gets outputted.

PO quantity changes from 14 to 10 PAC 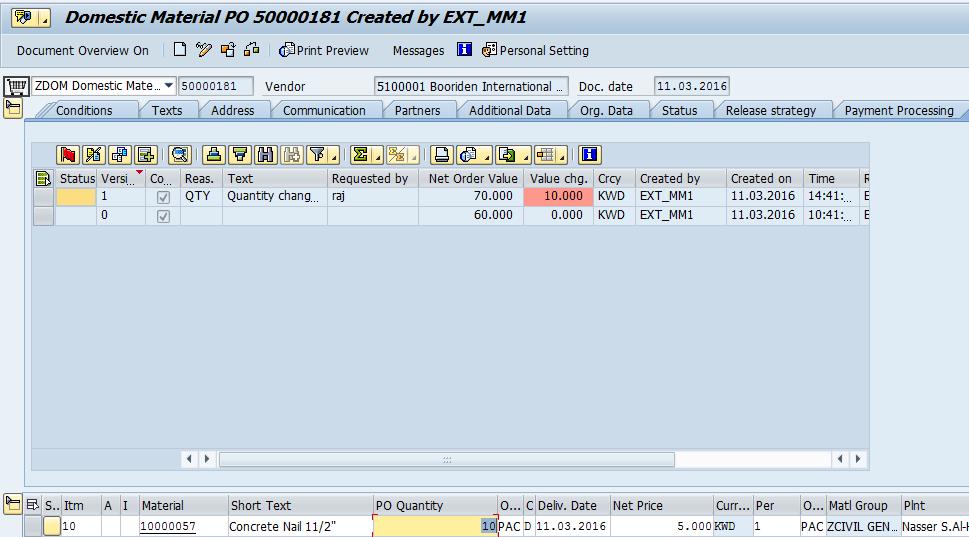 System will pop up for Version Management 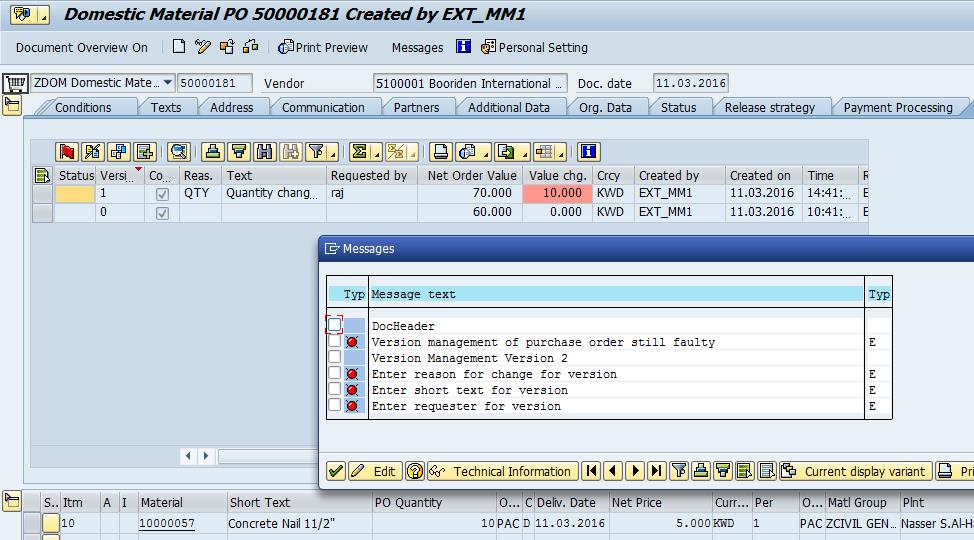 Case 4: Change in PO Delivery date, after PO fully released and the document gets outputted. 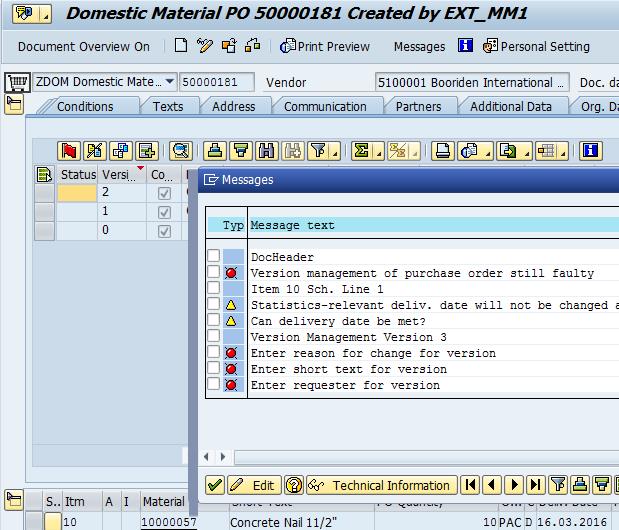 Case 5: Text creation or changing, after PO fully released and the document gets outputted.

Case 6: Material code change for the same quantity and same value, after PO fully released and the document gets outputted.

Finally my analysis was on how system behaves when the whole material code itself got changed but the price and quantity remains the same.

Version management, Release strategy and Output messages are different configurations in SAP MM but their behaviour in the system has some dependencies.

My inferences are as follows:

Thank you for this clear explanation.

Impressive Work Mr. Prabhullachandran. Blogs like these save a lot of time for people. Thank You. 🙂

From Version One onwards how to update released by , released date and time...

2.Same Purchase Order Going for Amendment ,and  New version number will create (I know) same purchase order , but my Question is very simple Purchase order will Re-trigger release or not

If the version management is not marked completed after changing qty to higher qty/value, the release strategy is not triggered and PO can still be processed further with higher qty. The higher qty is also changed in print output. So basically, user can change the PO qty after release and not mark the version completed and PO can be process further.