The first ever conference, UI5con, specially focusing on sapui5 and openui5 was held this Friday in Frankfurt. It was jointly organized by UI5 SCN community, sitFRA organizers and SAPUI5 team from SAP. The conference focus was on technical aspects with lots of time also reserved for networking with fellow UI5 developers and enthusiasts.

UI5con had in total 80 attendees from all over Europe representing well over 10 different countries and it was a great opportunity for lots of people to meet face-to-face for the first time. The community interest into the conference well exceeded all expectations and it was sold-out in little over 40 minutes meaning that unfortunately lots of interested people couldn’t attend. Hopefully next time we will have much bigger venue and all interested people can secure a place. 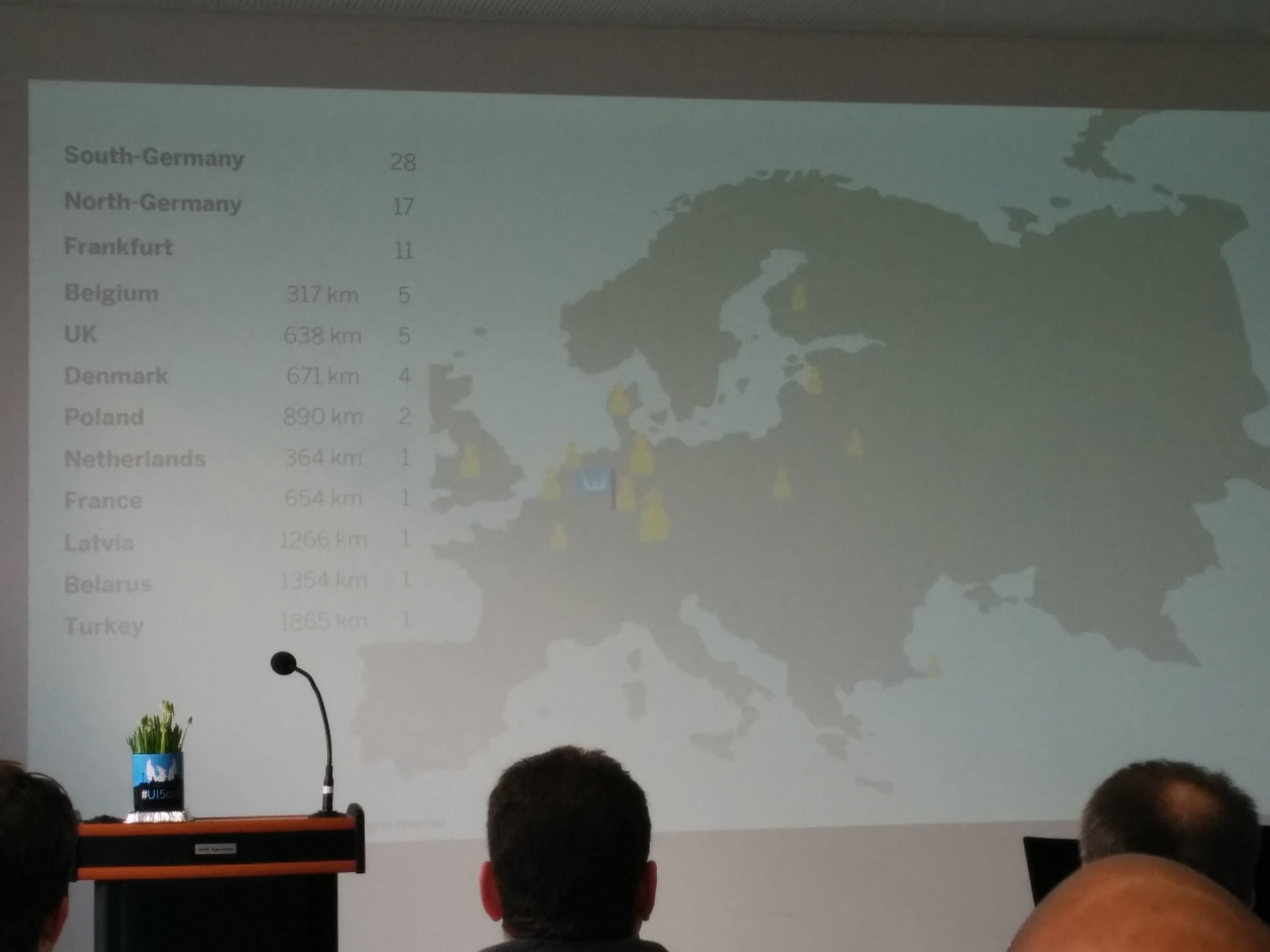 Many of the core SAPUI5 team members were also attending thus allowing community members to get some insight into how UI5 is developed and what is the future direction UI5 is directed to. I hope that the SAPUI5 team also got lots of useful feedback from community. At least they were really open to discuss all aspects of UI5 with the community. I still find it sometimes hard to believe, even after seeing it time after time again, that they have such a great culture of openness in that particular team inside SAP. Thanks and keep up the good work!

The UI5con day was fully packed with interesting sessions. All of the sessions had really interesting topics and it was really difficult to choose which ones to attend to as there were two simultaneous tracks going on. Fortunately all the sessions were recorded so look forward to watching them once they are released (maybe at the OpenUI5 Youtube channel)

After introduction from great hostess, Margot Wollny, the first session was held by Stefan Beck, Chief Product Owner of SAPUI5. He had an interesting talk about the history of SAPUI5 and OpenUI5, also with explanation for the origin of the phoenix in the UI5 logo. Stefan also explained the current areas of focus for UI5. 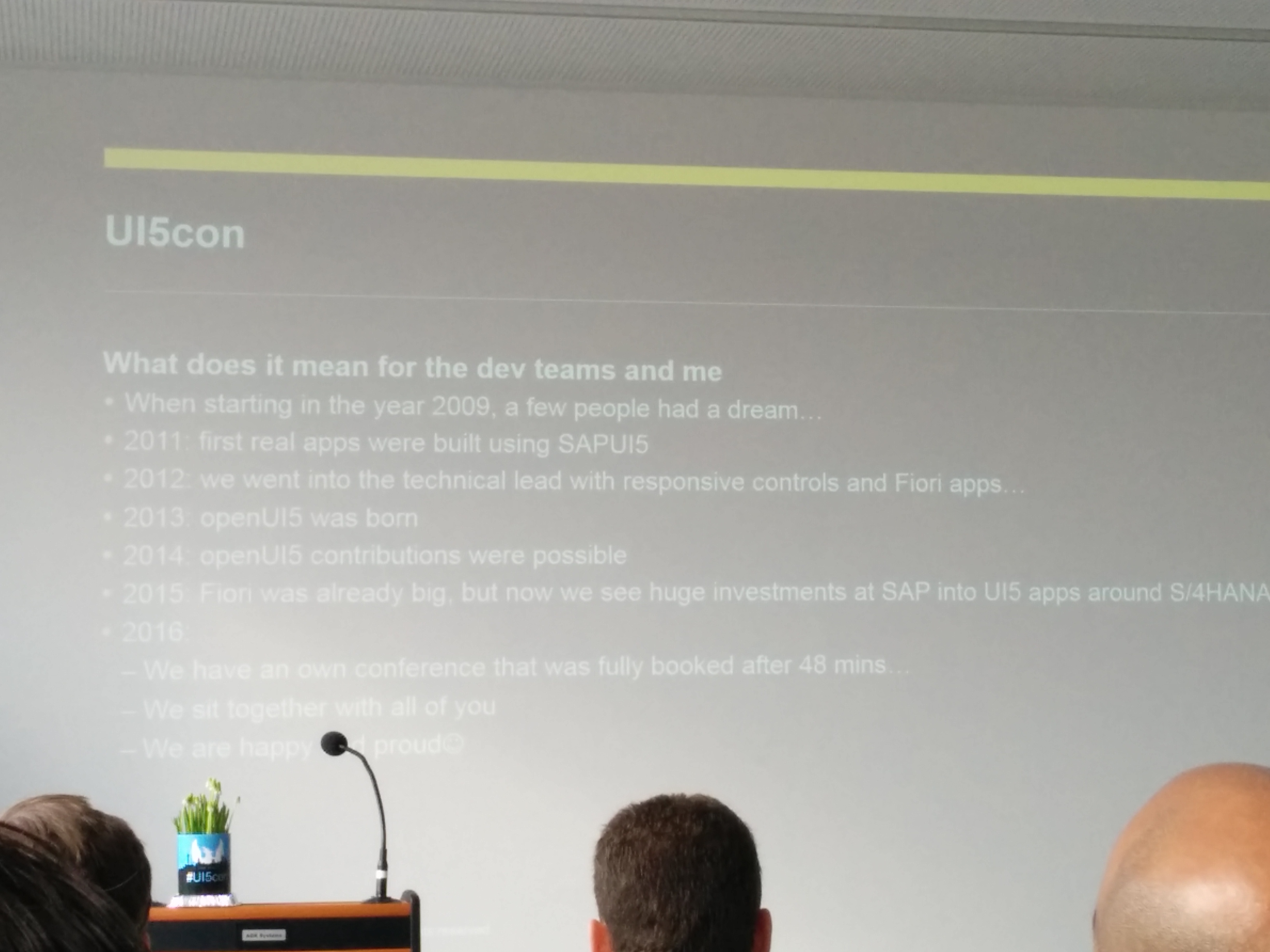 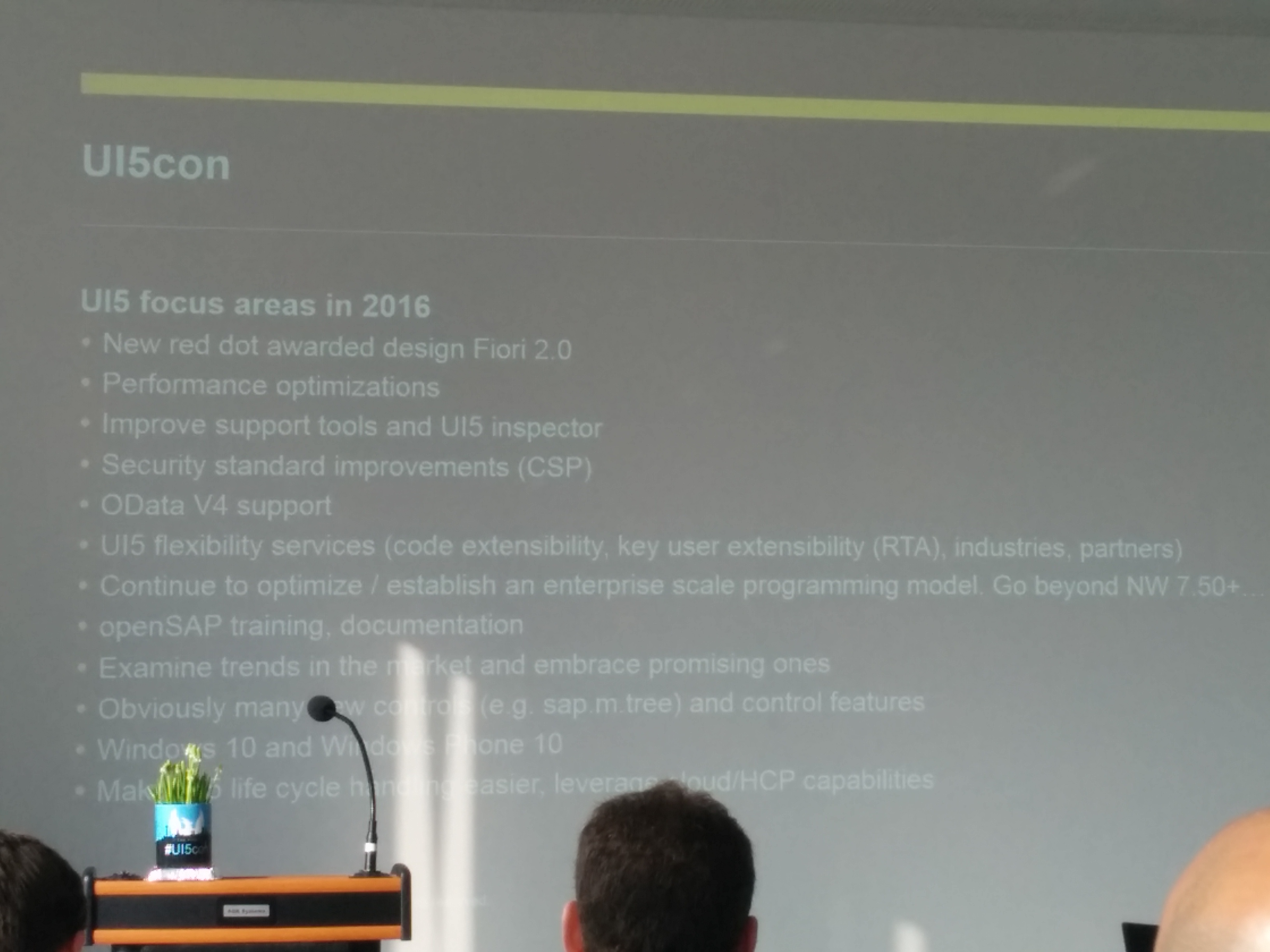 After Stefan’s session the conference sessions split into two tracks. From the two simultaneous sessions, I attended Nabi Zamani’s session: “Hacking the Explored App by Adding Custom Code”. Nabi explained the usefulness of the Explored App from different type of users’ point-of-view. Then he went onto running the Explored App on his own computer and extended it with a new tutorial explaining how to embed PDFs into UI5. The session helped to understand how the Explored App works. On the other track, Benjamin Steinvorth gave a presentation with title: “Minimize time-to-market with UI5” sharing findings about implementing an UI5 prototype in two weeks. 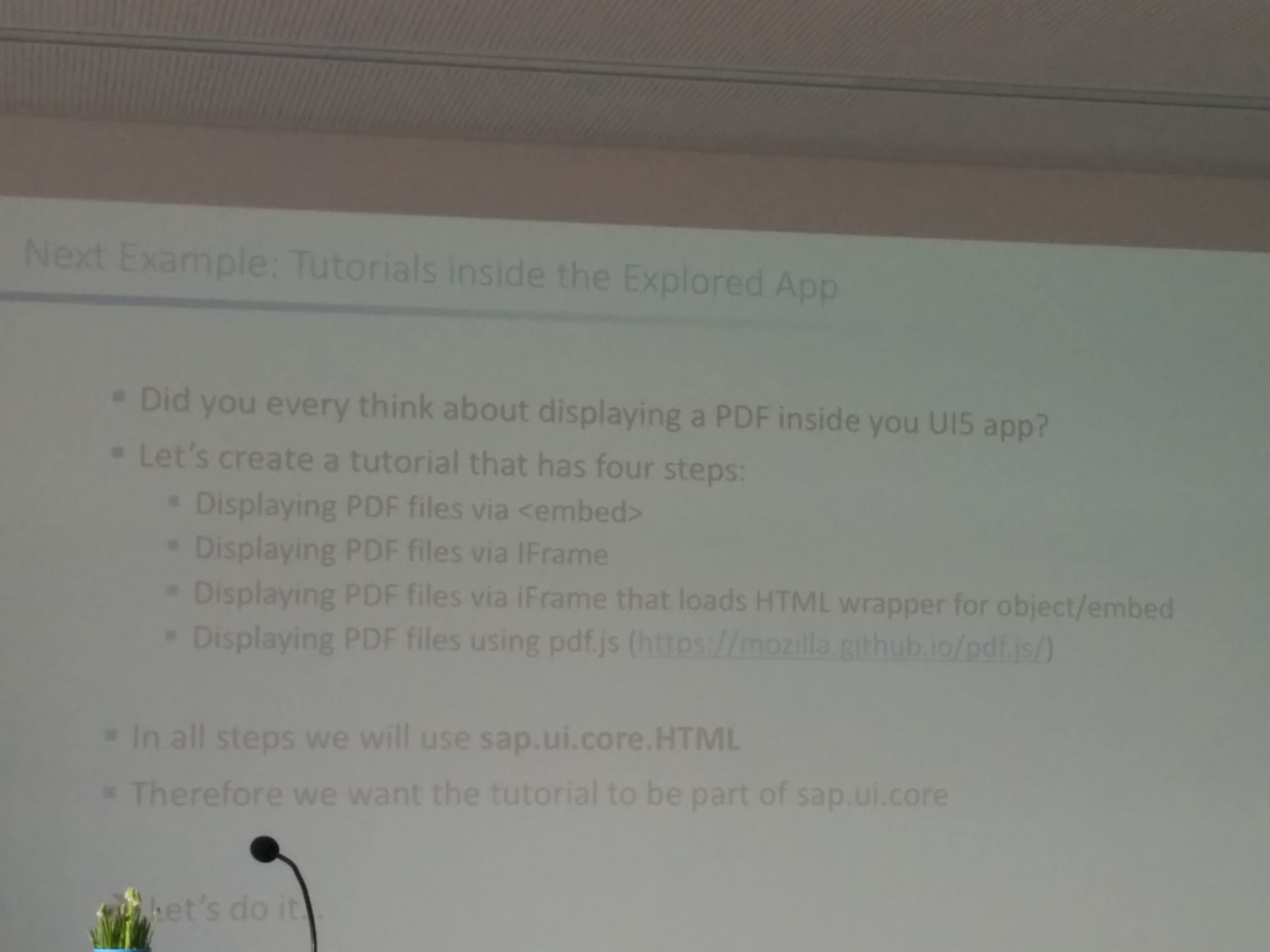 Next one up were HP Seitz and Sean Campbell. HP Seitz gave a session on Full-stack JavaScript with OpenUI5. Sean had bribed me to attend to his session with couple beers (Thanks Sean!), so I only heard the last few mins of HP’s session, but already from that it seemed to be a really interesting session. I look forward to watching the recording of that. Sean’s session was about Building C4C companion apps or about a simple HCP UI5 ticketing application backed with a C4C OData service. Interesting topic and session and I learned a lot from it not having been introduced myself to C4C before. 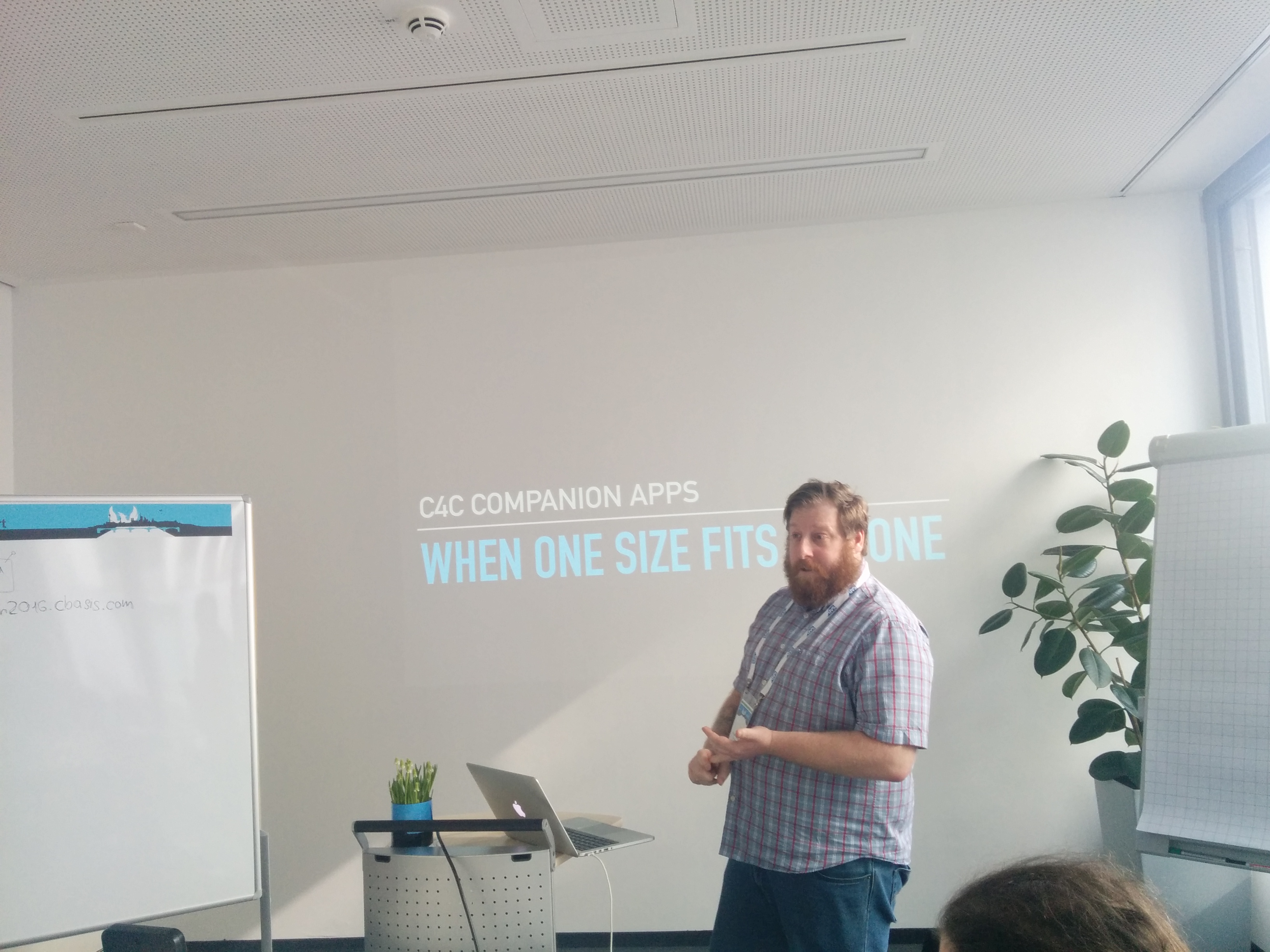 After a little break these was yet again two very interesting sessions going at the same time. Andreas Kunz gave us a presentation about custom UI5 controls introducing how to roll-up your own and what to keep in mind while doing so. The session was a little extended version from the one Andreas and Denise Nepraunig presented at UI5 Codejam in the Netherlands last November. Anyhow, even after listening the NL one, I still learned so many things. On the other track, Leo van Hengel, gave a talk: “Building Custom Site Templates for the new SAP HANA Cloud Portal with SAPUI5”. I am looking forward to watching the replay of that session also. 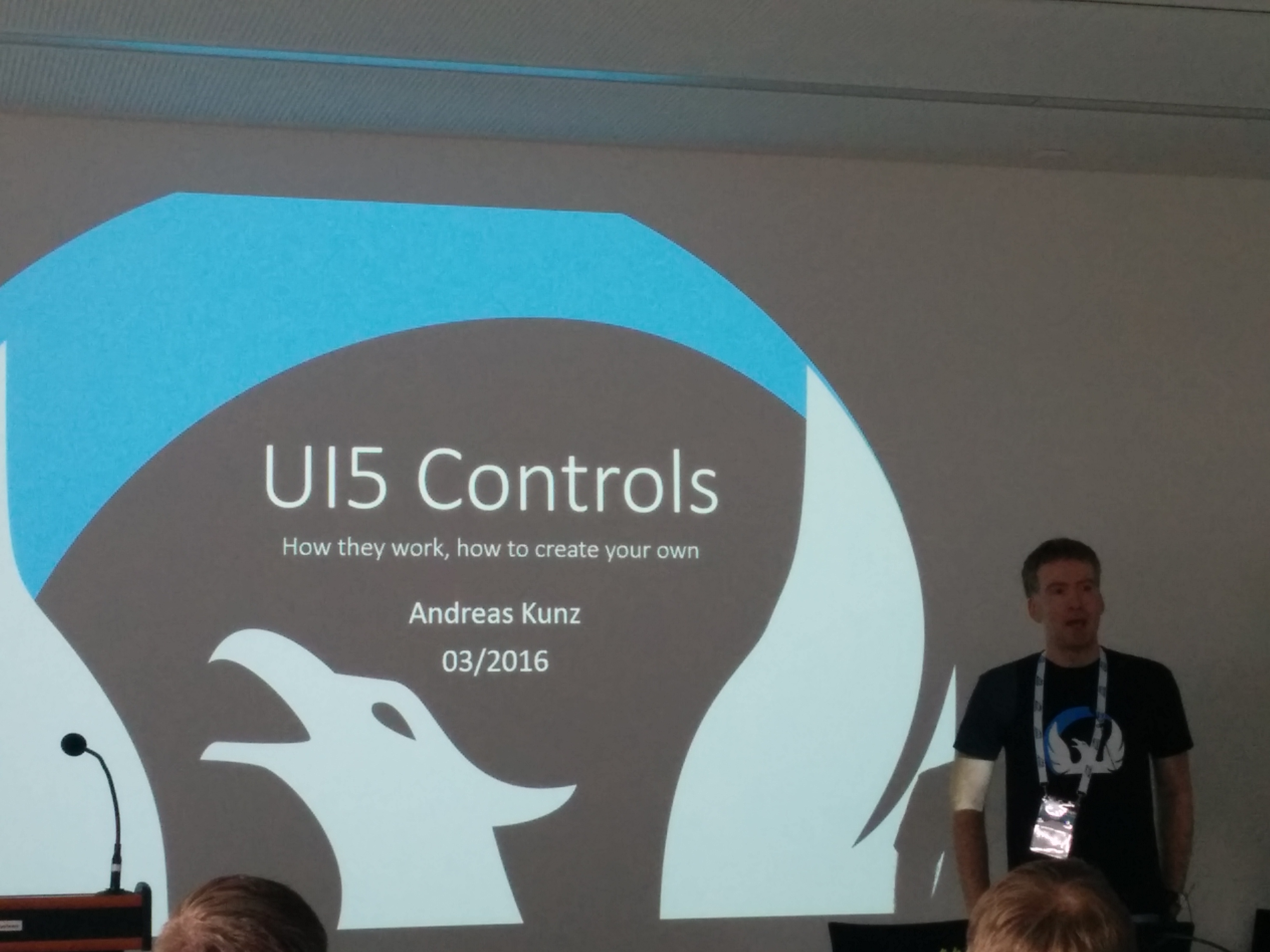 After a well-deserved lunch break (thanks organizers for providing that), it was timefor some lightning talks. First Denise showed us some Unexpected SAPUI5 Apps about Chuck Norris jokes (can’t go wrong with those) and Star Wars. Great to see example apps with something so different. Actually the whole conference was about community and interesting cases and not some typical business stuff. After Denise, it was my time to show how you can use UI5 apps by voice controlling instead of using mouse and keyboard. “Next”! Then it was time for Andreas Frische to show how you can use Type Script with UI5. It’s great to see that you can really integrate UI5 with anything, be it in the tooling side or related to other Javascript libraries. After the first set of lightning talks, the conference switched back to two track setting. On track 1, Helmut Tammen, explained Building Custom Graphical Control Using SVG (see the map below) with additional Usage of OData Server for node.js (or “no data server”). Interesting session overall and I really appreciate his work on implementation of an OData server for Node.js. On track 2, Qun Li and Ian Taylor explained “Using SAP Fiori Reference App as a Basis for your UI5 App”. Reference Apps are something I’ve gave a look into but still haven’t get used to taking advantage of enough. 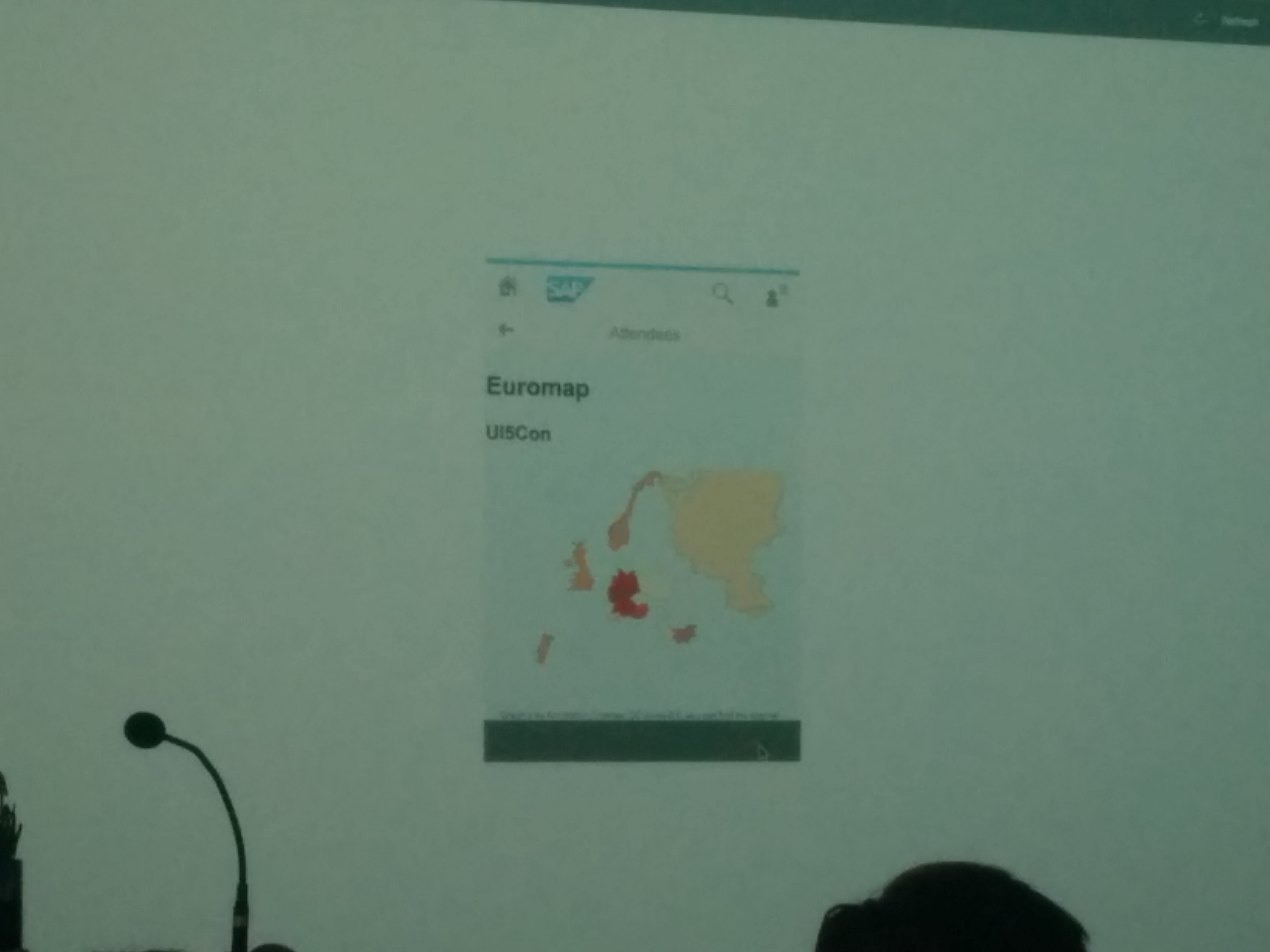 Switching tracks again, I listened to Tomasz Mackowski introducing Continuous integration in UI5 projects. CI is really the one aspect that we as a community must really focus into in order to become more mature and professional. But luckily it’s not something you either do the whole way or do not do at all. Tomasz explained many different potential starting, or continuing, points that we all can look into. The talk also inspired a vivid discussion among the attendees which really explains how everyone could share their thoughts at UI5con. During Tomasz’s session, Mark Schmale talked about “Combining UI5 and SAP LO VC for fun and Profit”. Look into the session recordings regarding that one. 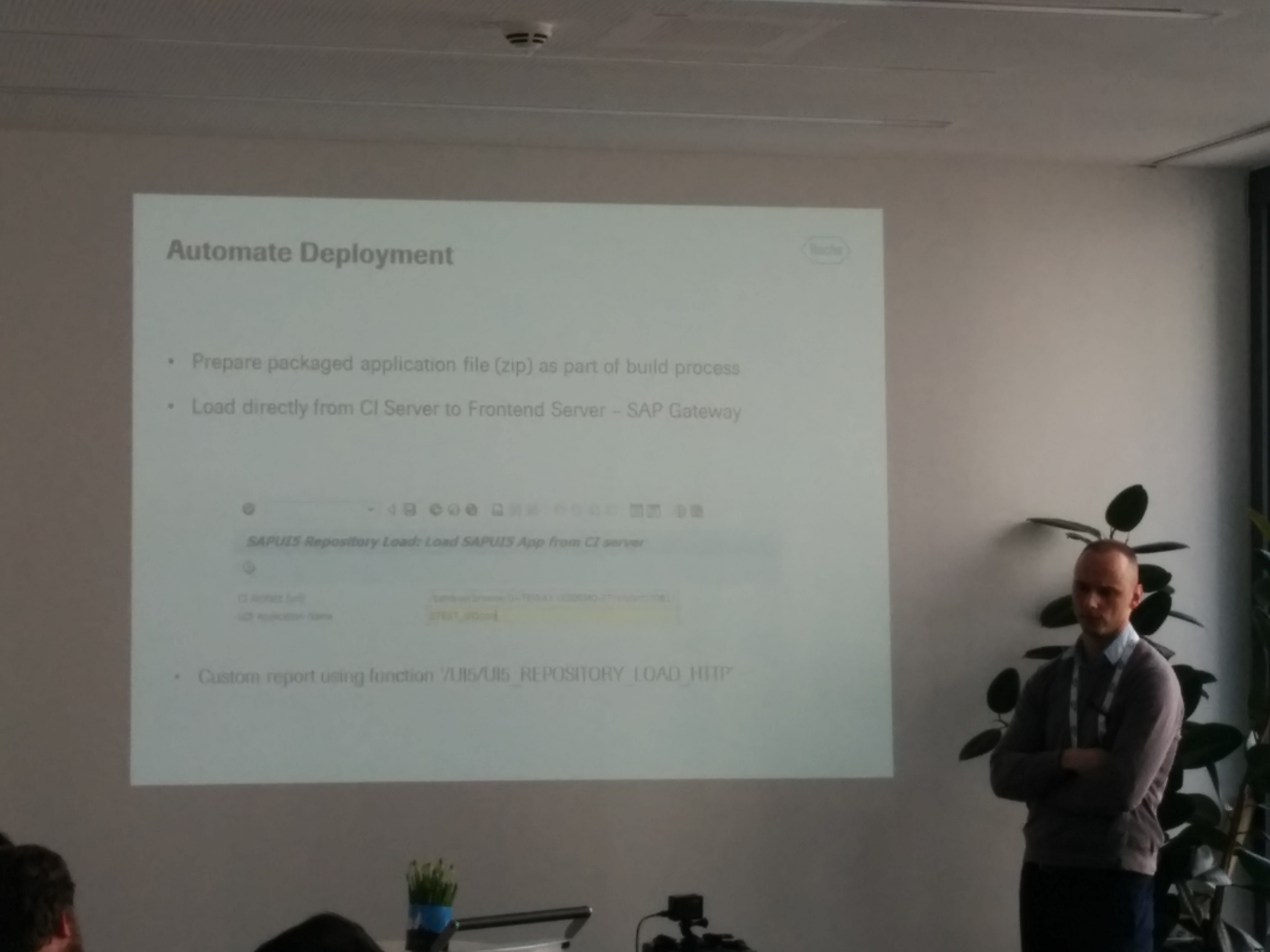 After a break, it was again time for some lightning talks. Dynamic duo: Wouter Lemaire and Jeremy Coppey presented how you can have it object oriented way all the way from ABAP to Fiori and back. Matthias Bollen and Tobias Trapp continued on “Analysis Path Framework – A Hidden Gem for Creating UI5”. I have to acknowledge that already at that point I was so overwhelmed from all the great sessions and can’t remember much from that lightning talk and it really had nothing to do with the talk itself. But that’s another good reason to watch the replay. 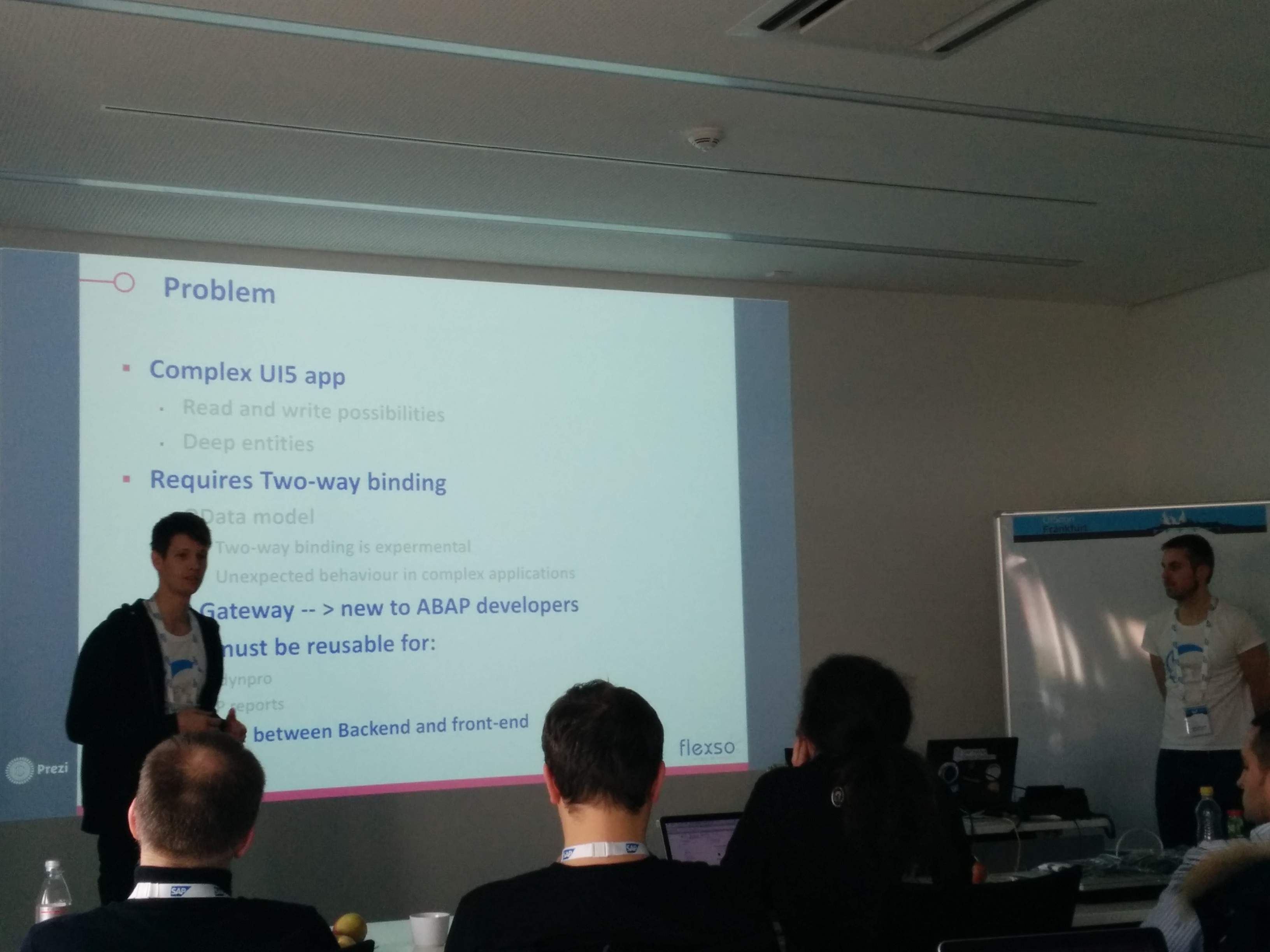 Next one was Maximilian Lenkeit giving longer presentation titled “Building Custom Controls to Visualize Data”. The session content was so packed and Maximilian had so many great things to show that he probably could have extended it to a half-day session quite easily. Maximilian also had the most awesome demo of the day with IoT sensor in a container that connected to real-time Fiori Launchpad apps visualizing sensor data in 3D. 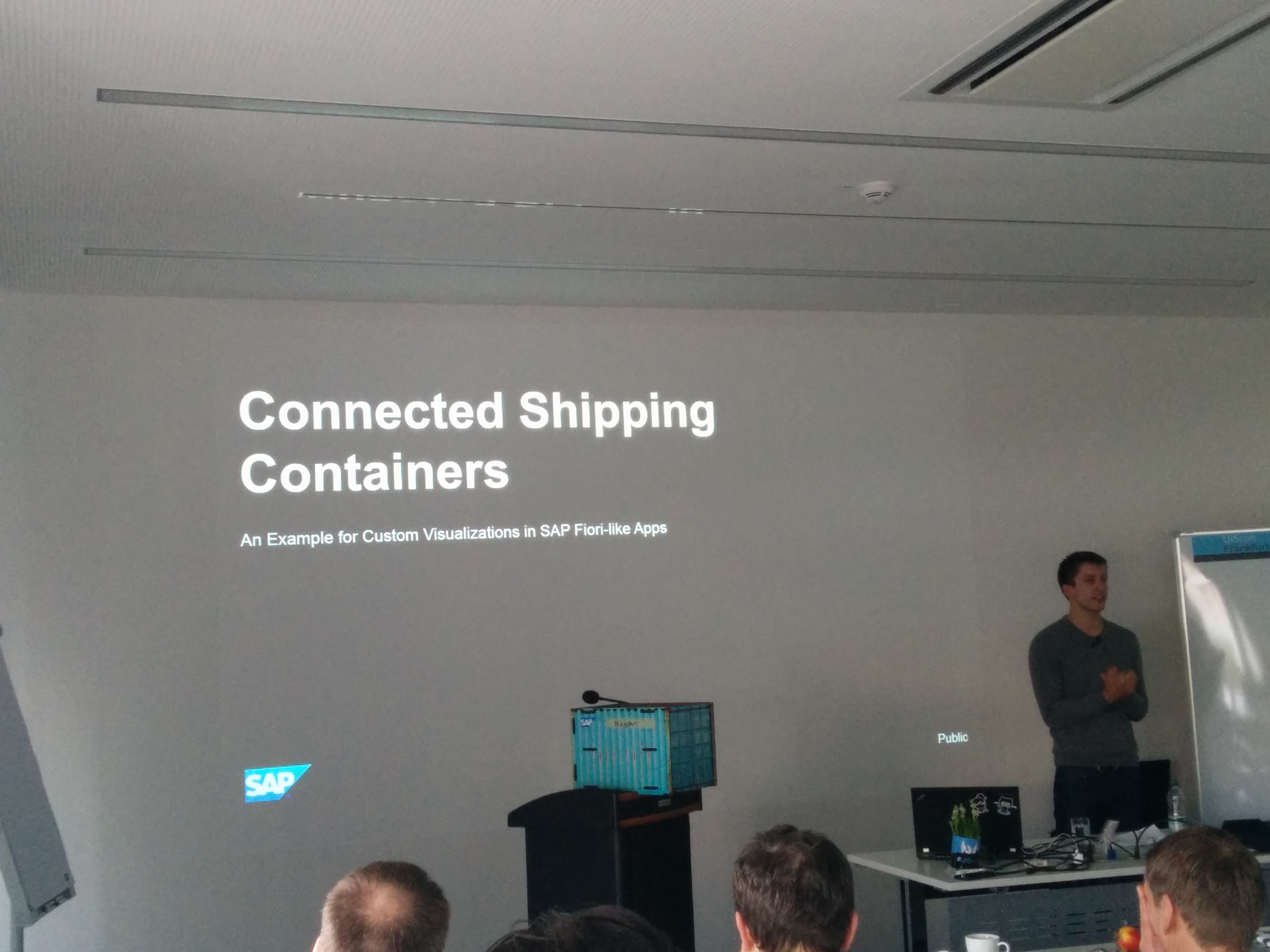 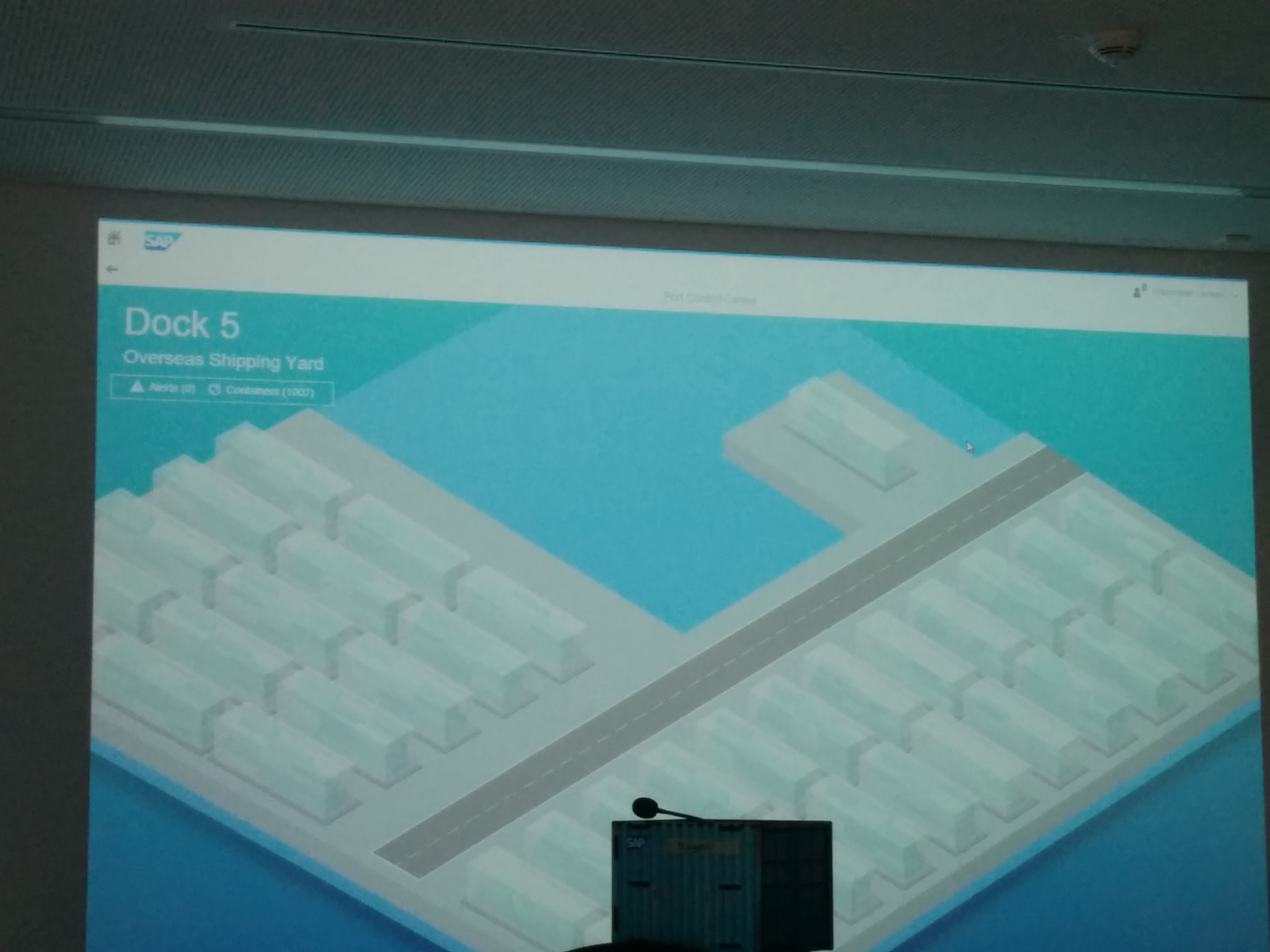 At the same time with Maximilian in the other room, Nathan Adams gave a presentation from a different perspective titled: “Developers are not designers”. After the session I talked with Nathan about design and usability from both user’s and developer’s point-of-view so long that we both missed the following sessions altogether. First of those sessions was presented Denny Schreber and Katrin Grohme and the topic was “Lessons Learned from SAPUI5”. The second was Volker Buzek “Inside a Container Persistence and UI5”. Both sound interesting so I recommend watching the replays from those. I will definitely watch them myself.

Then finally after a looong but wonderful day the last presentation was about OpenUI5 Spirit by Michael Graf from the UI5 team. It was great to see how SAP manages OpenUI5/SAPUI5 and how open sourcing the core framework has affected the using of tooling and development processes in the team. 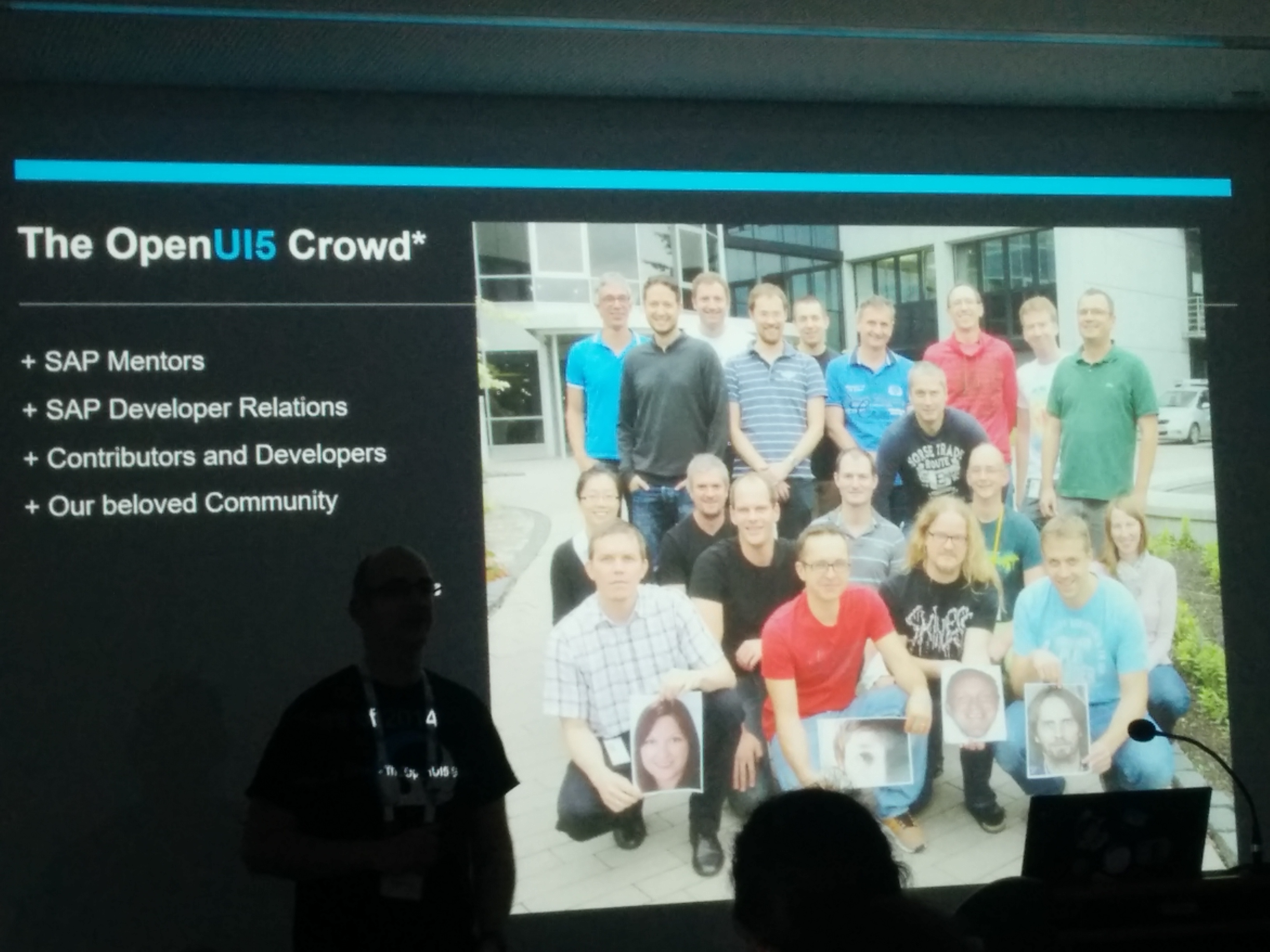 After that, the organizing team wrapped up the conference and most of the attendees continued to the well deserved evening event for networking and having fun.

Thanks for all the organizers, speakers and attendees for such a wonderful day.

See you in the next UI5con!

thanks for this great and fast written recap. It was really nice to meet you at the conference and have some beers afterwards :-).

One thing you did not write about enough in this recap was your lightning talk about voice controlling UI5 apps. It was really impressive to see this in action. I will remind and try to use it in my upcoming projects.

I've got so many stimulations and ideas for my next projects and the openness of all participants in our numerous discussions was really impressive. It was absolutely worth going to this event.

Thanks for the feedback. It was great meeting and discussing with you too.

I'm also really amazed by the openness of the attendees at the conference. Sharing really was caring at UI5con.

Thanks for this great recap. It was really nice to meet you again. List of materials can be found here - https://github.com/seVladimirs/awesome-sap-

Thanks. It was great meeting you again too. Thanks for the link to materials.

Wow! Sounds like a blast!!! Any chance there are videos available of it? (*thanks for the Github link to the materials above, Vladimirs!)

All sessions have been recorded, but it will take time to prepare them for publishing. As i heard, they are going to use their channel on youtube - OpenUI5 - YouTube

Thanks for the blog entry!

Is there any way to get notified about these events in the future?

Hope to see you again in some other events. 🙂

It was great meeting you and hopefully we'll see again in some other event.