Component Based Message Alerting (CBMA) functionality of Advanced Adapter Engine (AAE) of SAP PI/PO is already shipped with alert consumer that can be used to deliver alerts to recipients as e-mail messages. With increased popularity of smart mobile devices in alerting and notification solutions, some organizations experience demand in using alternative channels of alerts delivery and are interested in bringing them to mobile devices. Even though e-mail alerting is still very popular in enterprise IT world, during last few years, one of commonly raised questions in the area of alerting in SAP PI/PO, was feasibility of delivering alerts via SMS. SMS messages are surely more lightweight in comparison to e-mail messages, but large amount of SMS alerts on interface errors may overflow SMS inbox and cause other SMS messages becoming unnoticed among many alerts, unless some kind of SMS sorting and filtering is applied. Moreover, there is even more lightweight technique that is available on many smart devices – push notifications. What if an alert from a SAP PI/PO system is delivered to mobile device as a push notification?

Standard shipment of a SAP PI/PO system doesn’t deliver functionality to implement this kind of requirement by means of pure customizing, so let me share an option how this can be introduced to a system with minor custom development.

It shall be stated upfront that I haven’t yet found technical solution fulfilling this requirement, that would not involve intermediate services responsible for processing alert messages and delivering them to mobile device. High-level interaction diagram of involved components of the described solution is depicted on illustration below: 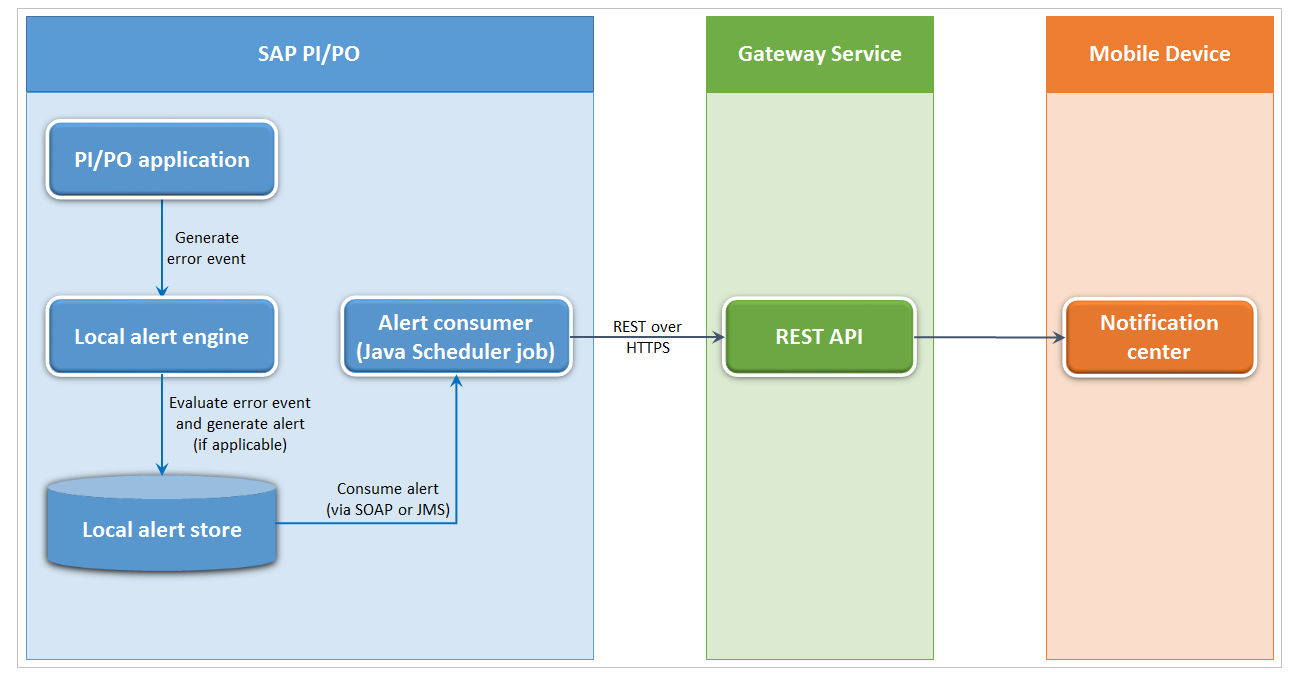 The solution is as following:

As a result, when an alert is produced by a SAP PO system and is consumed by an alert consumer job, an alert message is sent to a gateway service, which forwards it to a mobile device. Mobile device processes it and renders in a form of push notification.

Please note that this mechanism of alert notifications delivery to a recipient is in no way considered as a replacement of e-mail notifications or other alert subscribers. Nature of push notification is delivery of very lightweight information notifications, commonly consisting of very few text lines. In contrast, e-mail messages containing notifications or other alert subscribers / alert aggregation and processing systems (like SAP Solution Manager, if it is used as a central engine for alerts processing) normally handle and deliver more extended version of an alert providing much more details about it. Having written so, I would rather encourage to consider push notifications for alerts as a complementary technique to already existing and commonly used alerting approaches.

Remaining part of the blog contains major configuration steps and technical details of solution implementation and a demo.

CBMA is activated in AAE and appropriate alert rule is configured and enabled. If you need more information on this, you may find decent SCN materials that describe concept, technical details and configuration of CBMA in general and alerts consumption and notifications via e-mails in particular:

There are multiple services that are available for individuals and organizations to mediate incoming messages and deliver them as push notifications to various platforms running on mobile devices (and some of them provide services not only for mobile devices, but also for desktops) – here are just a couple of them which are commonly used:

Please note that some services require paid subscription, so it is advisable to refer to corresponding provider official materials for more details regarding terms and conditions of their services usage.

In the demo below, I’m using gateway service provided by Pushover – some parts of the described job implementation are specific to Pushover API and are not service agnostic (should be adopted if you would like to use another gateway service provider or if you host and run such a service within your organization). Pushover service exposes a REST API (RESTful service), to which registered users can send POST requests over HTTPS. Message transmitted in a request, is then forwarded to a registered device (mobile device running iOS or Android, or desktop). Mobile devices process received message and deliver it to Notification Center software of a device in a form of push notification.

Gateway services may require installation of specific applications on mobile devices in order to enable communication between a gateway service and the device, before messages can be delivered and rendered by the device as push notifications.

Corresponding Pushover application was installed on the mobile device used in a demo (iPhone mobile running the latest iOS version).

After this was done, when an application was started for a first time, it was logged into the Pushover service using earlier created user account credentials, and device ID was specified. Device may be used later on to subscribe to specific applications or to be explicitly specified as a recipient of a notification when sending notification messages to a gateway service.

Screenshots below highlight major created objects in Pushover service account, that will be used in a demo: 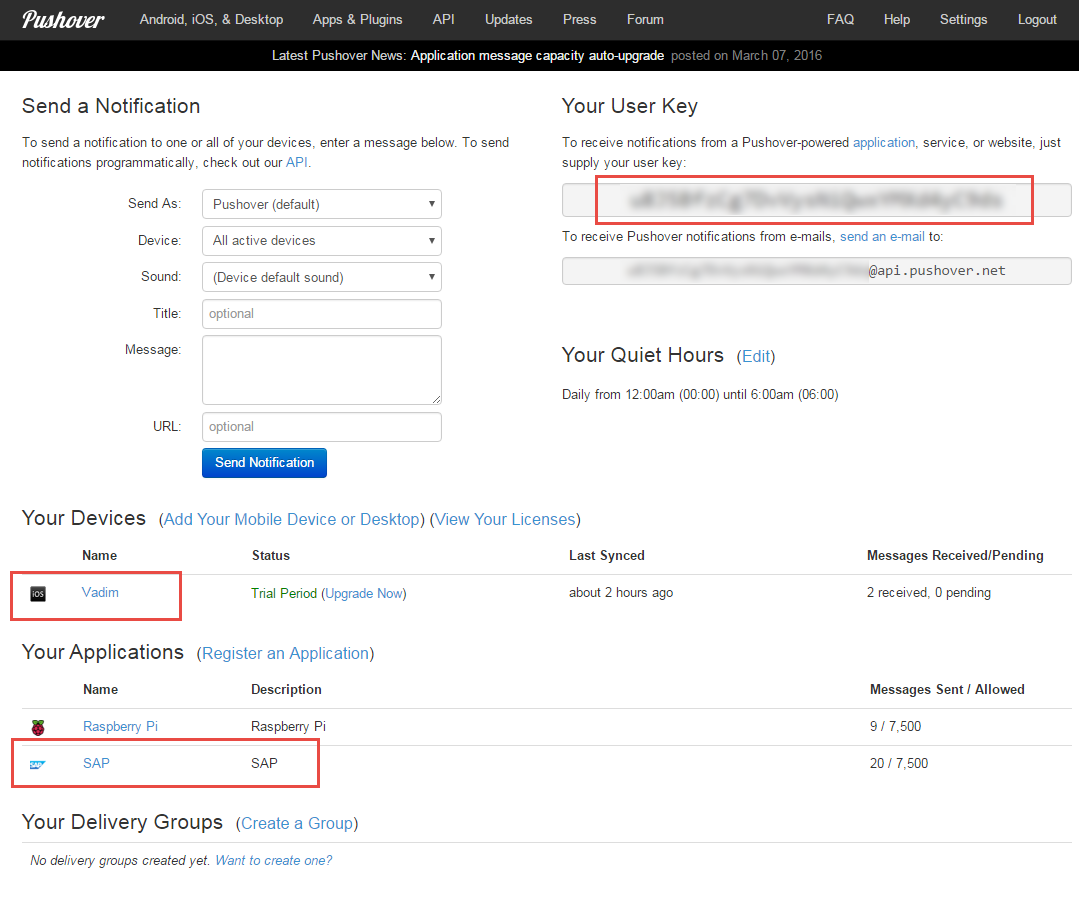 Both mentioned alert consumption methods (calling SOAP service and consuming from JMS queue) have advantages and disadvantages – here are few of them:

Mentioned aspects may be relevant or irrelevant in various environments and in application to specific requirements, so an implemented job supports both alert consumption methods and the one who schedules the job may decide which option suit them better.

After EAR file containing a custom alert consumer job is successfully deployed to a SAP PO system, we are ready to schedule a job and test its behavior.

Corresponding job definition name for which job task is to be scheduled, is “AlertConsumerPushNotificationJob”:

Currently following job parameters are valid for this job definition:

Below is an example of provided job parameters for a scheduled job task (push notification user key and application token are masked due to security considerations): 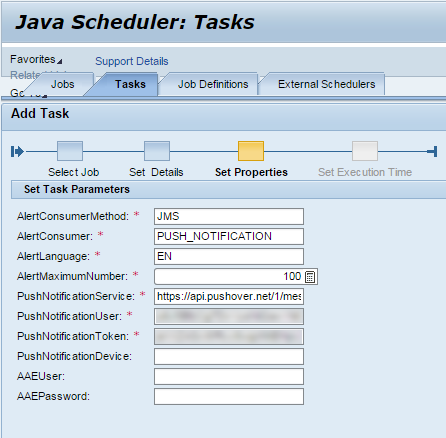 After a job is scheduled, I produce several errors for one of scenarios which were assigned to an alert rule created earlier for this demo.

If a job is executed successfully, then job log will look similarly to the one provided below:

Let me also demonstrate some erroneous cases by creating this job task with various combinations of job parameters. If job execution encounters errors, it is worth checking job log first to identify problematic area or step where error occurred – here are few examples of erroneous cases reflection in job log: 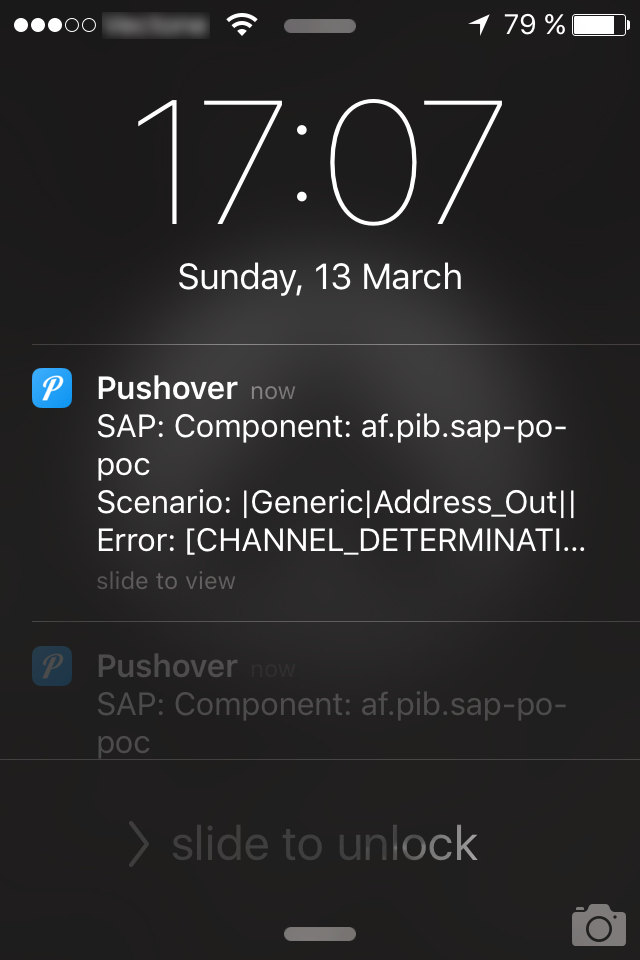 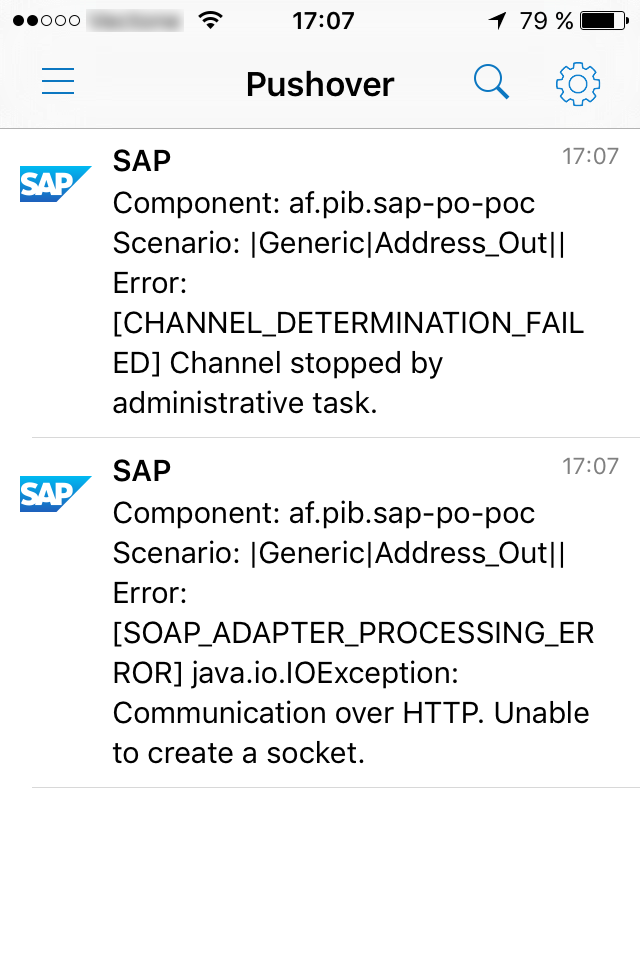 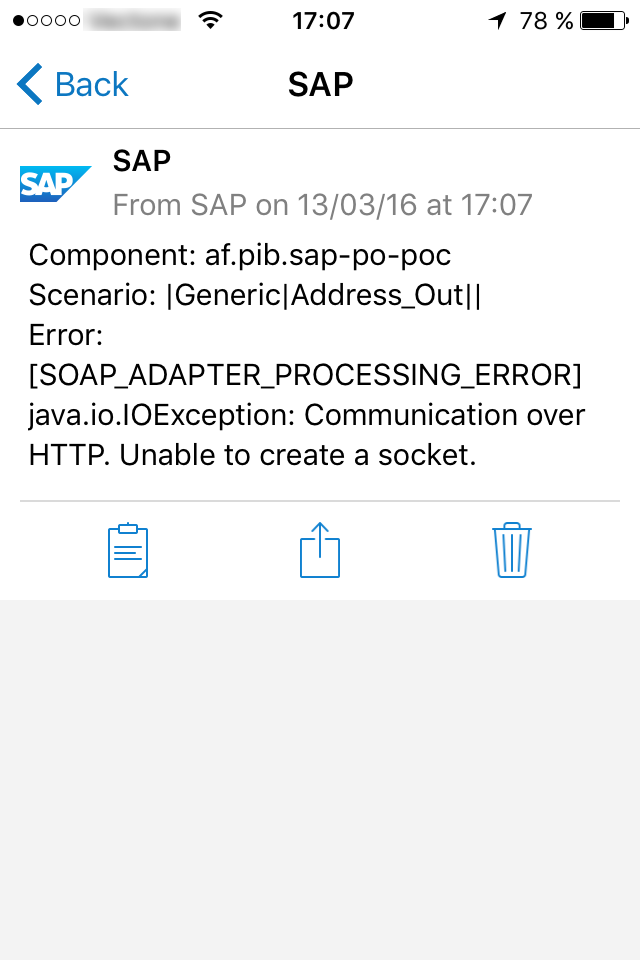 You can download SAP EAR file that is a bundle containing the described job implementation, and source files from which it was built, from following locations:

Projects were built using NWDS 7.31 and compiled using JDK 6. Most recent stable versions of mentioned dependency libraries, which were released and at a time of a blog writing, were embedded into an assembled EAR file.

The job was tested in a SAP PO 7.31 SP16 system. This job has only been used and tested in a prototype, and has not been used in productive environment yet.

Thank you for sharing your experience on this topic.

Can you please provide the document on this.

Right now I'm working on PO7.4 (Single stack) without solution manger. So if it is possible to do Alert to Mobile SMS??

It is technically possible to alert via SMS from PO, but it is not something that comes out of the box. To fulfil this requirement, you will have to go with custom developed solution, and also think of SMS gateway infrastructure that will be used by SAP PO to send SMS (SAP PO does not have standard components for sending/receiving SMS).

I've downloaded the files from jithub, NWDS is complaining about the manifest files. Can you please check and advise? Thanks,

Did you get any error/warning in NWDS for the manifest file? Can you please provide details of errors that you face there? This shall help me to understand context of the issue and to see how we can address it.

The .ear file is not opening. exception: !java.util.zip.ZipException: error in opening zip file!

Nikhil, I have re-uploaded the EAR file - note that it was moved to releases section of the repository and the link for it has therefore changed. Here is a link from where you can download compiled code assembled into the EAR file and source code for it. Can you let me know if it now opens well for you or if the issue remains.