The recording of the call is here

and Moving to S/4HANA Architecture Call

I am currently preparing the Powerpoint for the S/4HANA call, and we have some great SAP Product Manager Experts who have kindly volunteered to attend the call taking the role of Subject Matter Experts. Nevertheless, the call needs to have a strategy and that is the role of the  “call deck”. This S/4HANA call is going to be a difficult one to moderate because none of us have the comfort of being an S/4HANA expert.

So here goes, next Wednesday’s call Invitation: #SAPSysArchs – SAP S/4HANA Preparing Your SAP Landscape and Moving to S/4HANA Architecture Call – Wednesday 16th March 20:30 CET has laid down the gauntlet of wanting to answer 5 typical questions that a SAP System  Architect might find on their table when preparing for moving their SAP Landscape to S/4HANA.

In this blog, we will lay out these questions and the answers, and link to supporting documentation which is available to everybody [ in some cases as long as you have an S User 😉 ] enabling everybody to prepare for  the call and get even more value from the call by bringing even more targeted questions to the Experts from SAP. As ever, any questions which cannot be answered in the call will be noted and answered afterwards.

This blog, will then be used as the call deck for us to walk through during the call and openly discuss and question.

SAP S/4HANA replaces SAP ERP in your landscape, SAP are saying that S/4HANA is a new Product, which

it is, but this is confusing Customers, who are wondering if S/4HANA sits in their Landscape next to ERP ECC.

The answer is, S/4HANA is the product evolution of SAP ERP ECC. We can think of this like when Ford

their Product names for Products in the same category, the Golf and Passat have been around nearly as long as me,

and let’s not even think about the Beetle 😀 ). 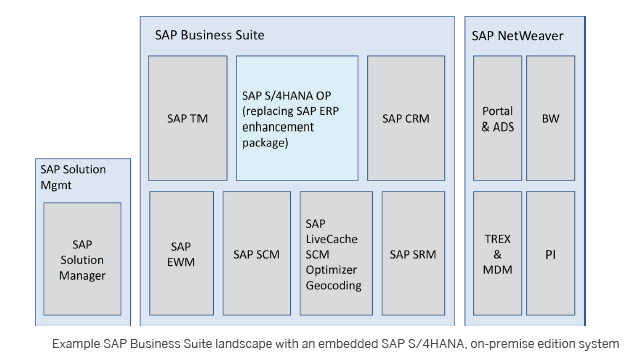 Boris Rubarth has very nicely shown in his blog System Conversion to SAP S/4HANA: SUM is the tool that:

notice the guidance that we’re not talking about a migration to S/4HANA, but a Transition

The Transition Paths are as follows: 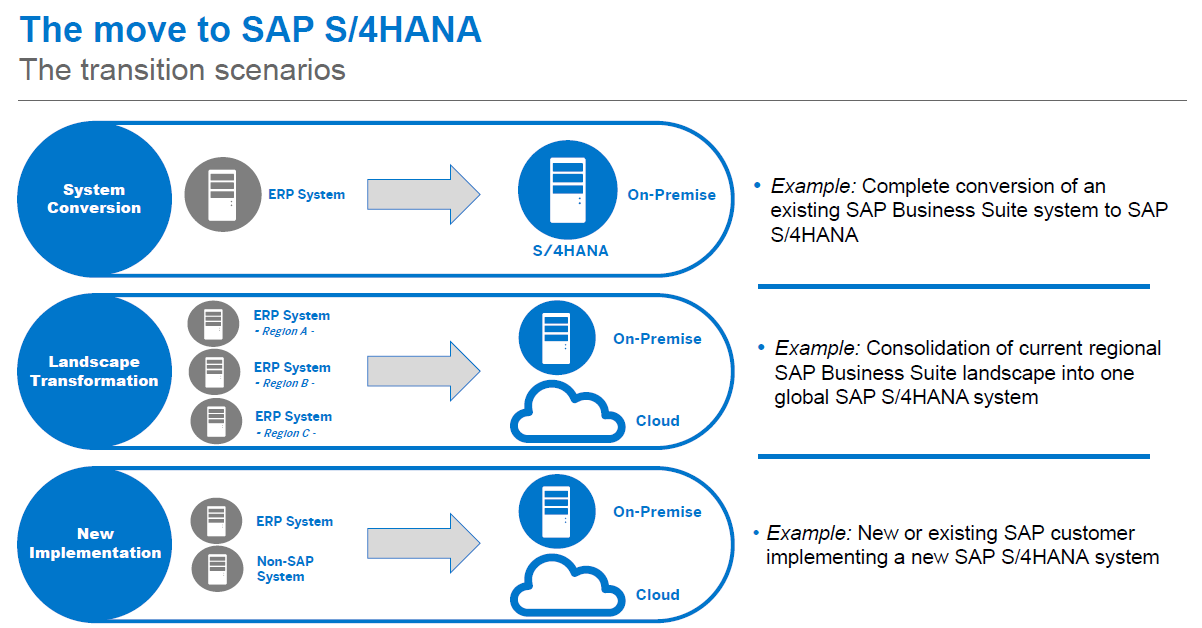 At the highest level, the 1st question is answered, there are three paths for transitioning to S/4HANA,

If you have an S Users, the S/4HANA Installation Guide is the must read as is the S/4HANA Conversion Guide 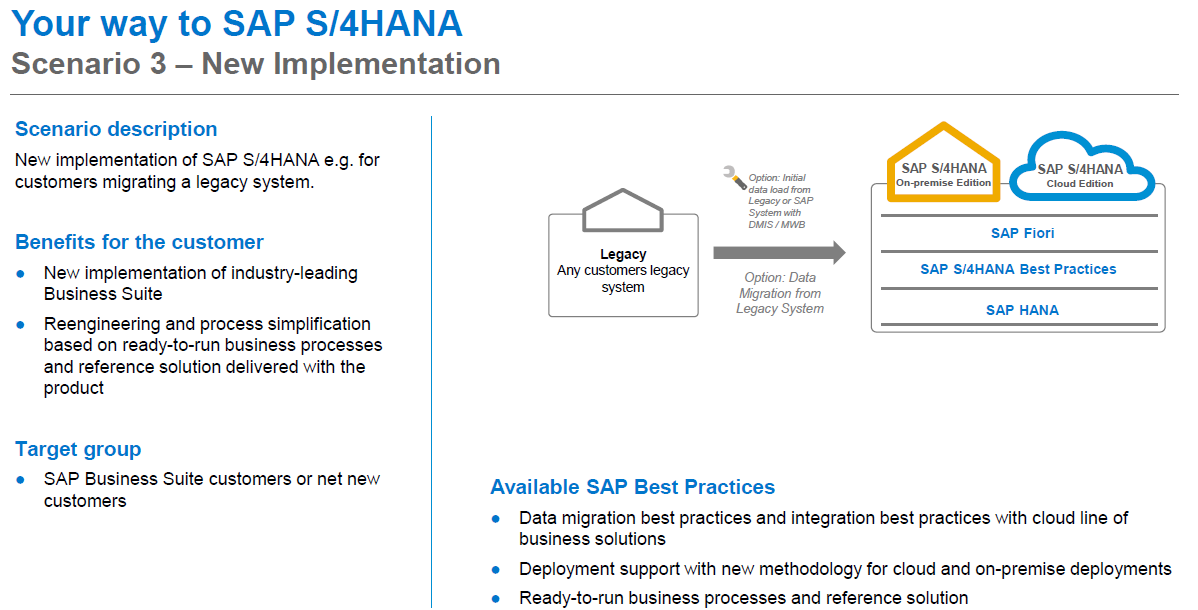 System conversion is interesting, because, if you have the right pre-requisite ECC version

in one step, this one step takes care of the S/4HANA migration and transition to S/4HANA. 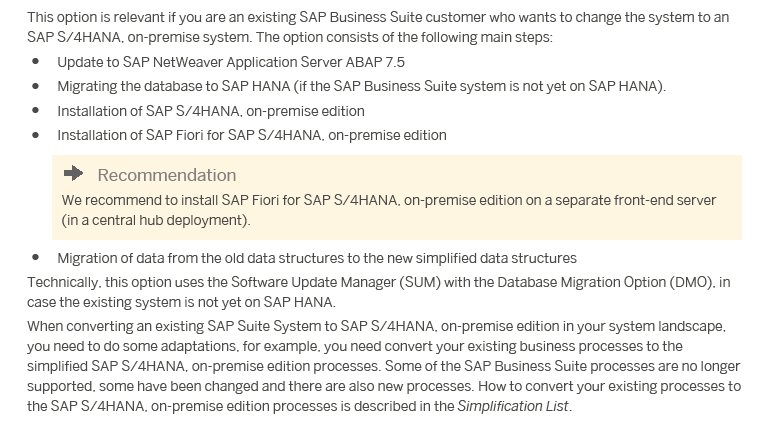 Boris Rubarth has really described this nicely in the blog System Conversion to SAP S/4HANA: SUM is the tool

This is all beautifully shown in this picture: 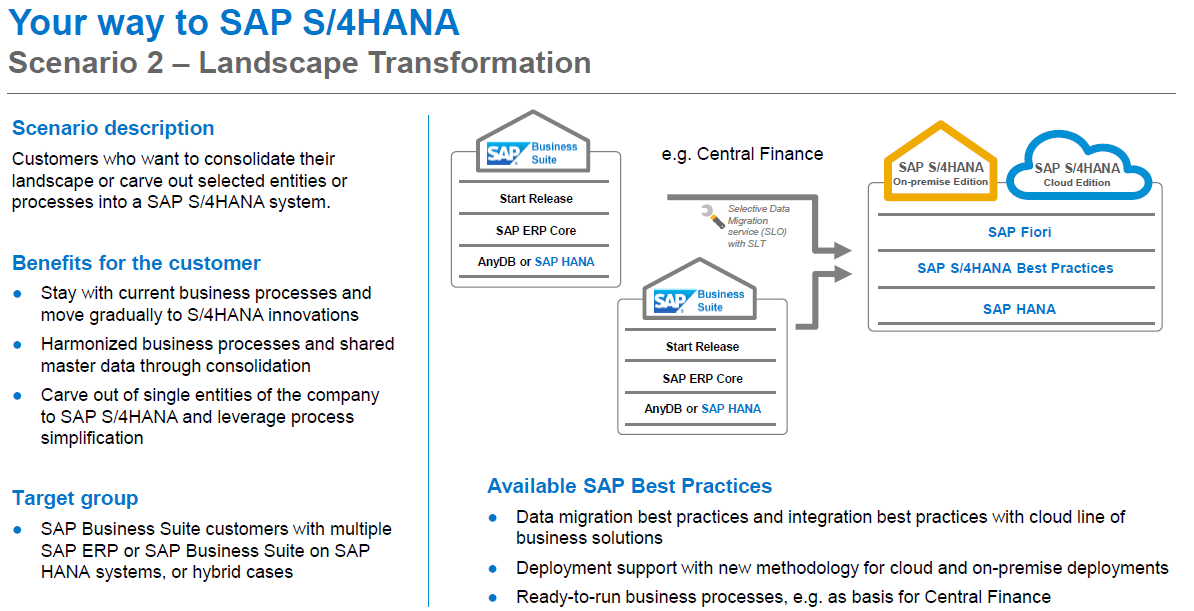 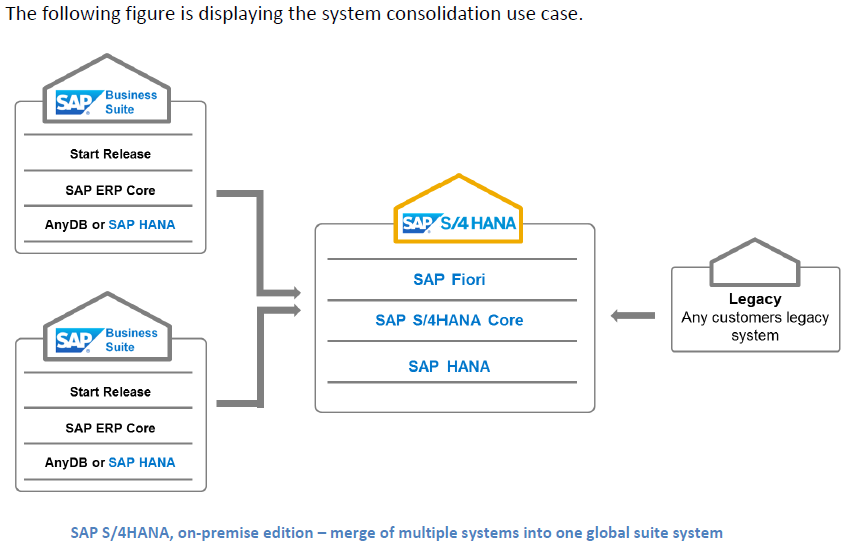 Other useful material related to this question:

The Transition to SAP® S/4HANA

We could do with discussing further why an existing  Customer running ECC might take a New Installation over Transitioning an existing ECC ?

2) What Data preparation should the Customer make in their system, is there any data cleanup required before moving to S/4HANA ?

These are the steps in the Conversion Process: 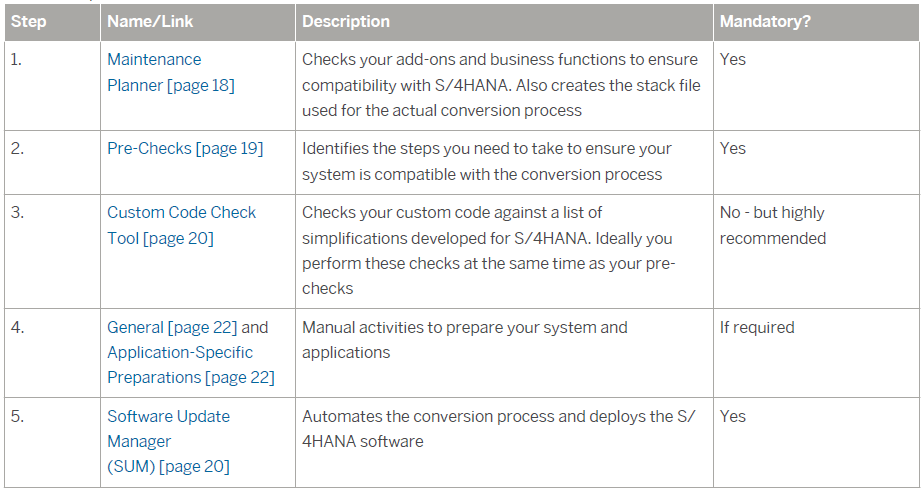 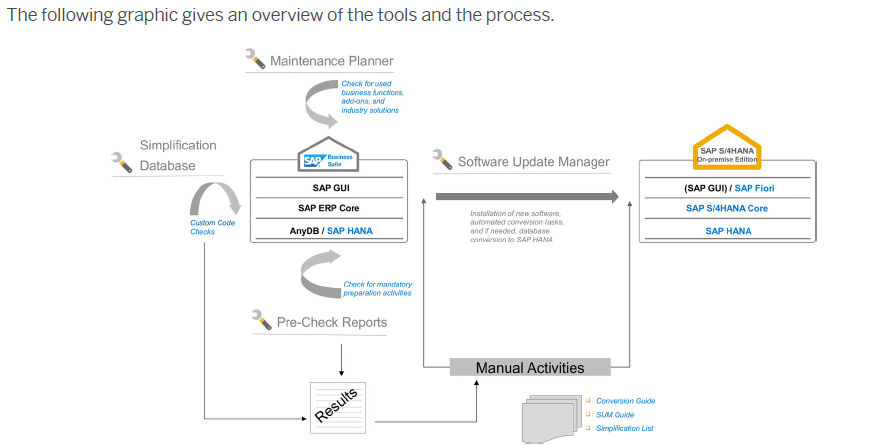 Let’s make the assumption that we are doing On-Premise, and this is a Transition to S/4HANA of an existing ECC, including the conversion step, starting again with Boris Rubarth ‘s blog, System Conversion to SAP S/4HANA: SUM is the tool , the steps are summarised as:

Going into more detail, (S User needed) and checking the S/4HANA Conversion Guide there are a list of steps which are described in detail including:

The must read on this subject is the (S User required) Simplification List for SAP S/4HANA, on-premise edition this 300 page document’s goal is: 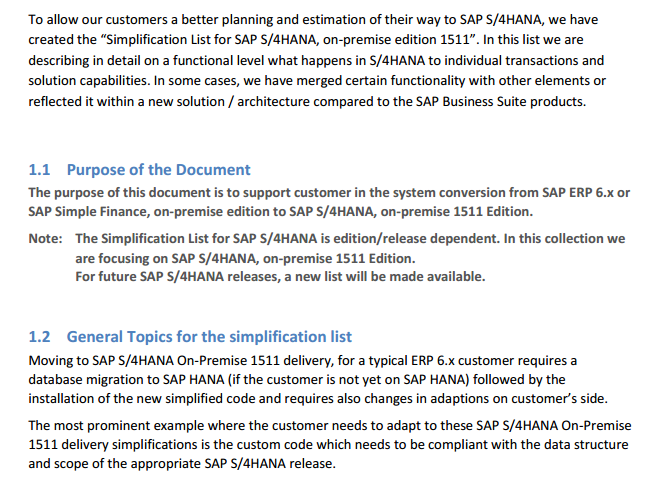 3) Are there and HCP Cloud dependencies on running on Premise S/4HANA, “How deep are cloud offerings integrated/how strong is the dependency?”, Do customers have to integrate the SAP HANA Cloud Platform necessarily to introduce S/4HANA?

S/4HANA On-Premise is not dependent on S/4HANA on Cloud.

It will be interesting to understand if there are any features in the S/4HANA on Cloud which are not available On-Premise.

4) What about Custom Code, let’s say a Customer has a lot of custom code in their ECC, and wants to migrate to HANA and upgrade to S/4HANA, how does the customer check that custom code will not cause any problems, does SAP have any reports which can be executed which will tell

you if custom code will migrate to S/4HANA ok, or if you will have problems ?

which is publicly available, and introduces the Custom Code Migration Worklist: 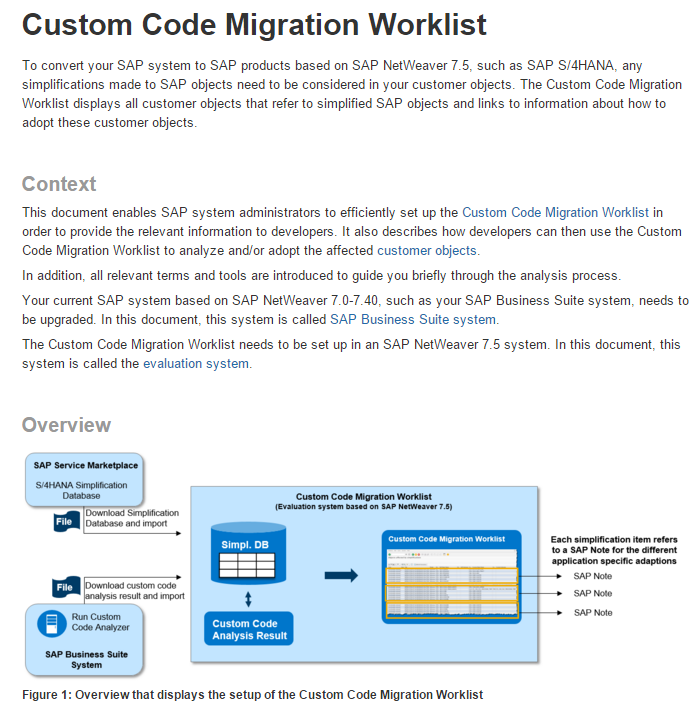 I think that answers this one, we can go into more granular detail in the call with the Experts.

5) Like in preparing BI for a HANA migration does SAP have any reports which have to be executed as a pre-step for the journey to S/4HANA to enable the customer to see how healthily prepared for S/4HANA their system is ?

The Conversion Guide describes the Pre-Checks as:

The is an important development too, according to the S/4HANAUI Technology Guide, S/4HANA requires Fiori.

Ok, and here’s the best bit, the last paragraph on Page 8 of the S/4HANA UI Technology Guide says,

This is a heads up to everybody, according to the (S User needed) Fiori Road Map , SAP S/4HANA architecture

This brings even more relevance to the previous two calls,

We now have the “call deck” which we’ll use to walk through the call. Let’s all between now and

next Wednesday dig a little deeper into this subject so that, we can really get the interesting

who will be present in the call.

We now know the basic principles of S/4HANA and moving to S/4HANA:

. S/4HANA although a new Product is the evolution and replacement of ERP ECC

. For an existing Customer to transition an existing ECC to S/4HANA there are three options

. Checks if Add-Ons in the system are accepted for conversion

. Checks if Business Processes in the system are accepted for conversion

. With the SUM Tool from SAP these can be executed in one big bang

. There is no S/4HANA Cloud dependency on S/4HANA On-Premise

. Custom Code must be checked for acceptance in S/4HANA

. Fiori and Gateway are required components for S/4HANA, recommendation is a hub solution

In the meantime, myself and the Subject Experts from SAP S/4HANA Product Management

will try to fill in the gaps highlighted above.

Everybody is welcome to put questions in the comments here, or bring them to the call directly.

Thanks for the compilation.

Correct me if i'm wrong:

i) S/4HANA is using embedded analytics instead of HANA live.

ii) Frontend gateway is currently support to run only on ASE, MAXDB, and SAP HANA.

we will bring both of these questions to the call.

Have a look at the last paragraph of Page 8 !

whoever want to implement S/4HANA 1511 need to take note of this. Also, perhaps SAP can justify what'll happen if frontend server is running on db other than those supported.

I hope the SAP Experts that joined the call could answer this questions:

Thank you very much for this valuable presentation of topics that, as I am sure, makes everyone very excited.

I was wondering if there will be follow-up call where topics like Data Volume Reduction and Cleaning up of data. These are some of the main selling points of SAP HANA on BW, and I am sure it will be hot topic for S/4 HANA as well.