Tired of the Excuses? Throw Diversity-in-Tech Assumptions Out the Door at #LWTSummit 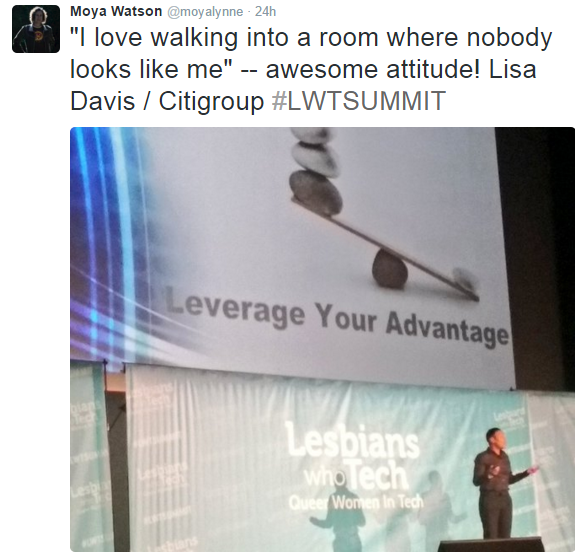 “I love walking into a room where nobody looks like me,” said Lisa Davis of Citigroup during her talk “How to Leverage Your Most Compelling Advantages” at the third annual Lesbians Who Tech Summit in San Francisco last week.

Flying in the face of the awkwardness many of us have adopted when we’re “the only whatever it is in the room,” it was just one of the many assumptions challenged during the four-day oversold event boasting a record-breaking over 1500 attendees.

And I needed it. I countered this exact sentiment in a recent film in which I admitted that I’m often not sure if it’s ok to be out as a lesbian in technology. Such self-censorship comes at a tremendous loss to freedom and creativity personally, for business, and for us all. The Lesbians Who Tech Summit is a conference that removes that entire burden and serves as a revelation and a liberation.

Kara Swisher, afternoon keynote and long-time Silicon Valley commentator at Re/code, challenged us even further (as is her way). She suggested there is, in fact, no such thing as unconscious bias. Unconscious bias is the term often used to rationalize why well-meaning homogeneous groups of people don’t tend to choose diversity while hiring.

“There’s nothing unconscious about it,” she said.  “If you’re ten white men at Twitter and you didn’t notice, you’re [insert expletive],” a reference to Twitter’s flap last fall over the mostly-white-male makeup of its board (a situation they’ve been working on transforming ever since).

“They sit around and feel bad, and they never do anything about it,” she continued, referring mostly to the homogeneous crowd of tech founders and board members in Silicon Valley and beyond, but homogeneity – let’s be clear — especially in higher levels — is a problem most tech companies share, apparently helpless to effect meaningful and lasting change.

So let’s talk about what we CAN do. If this is a situation you want to transform, here are three things you can do, all insights from the last few days at the Summit: 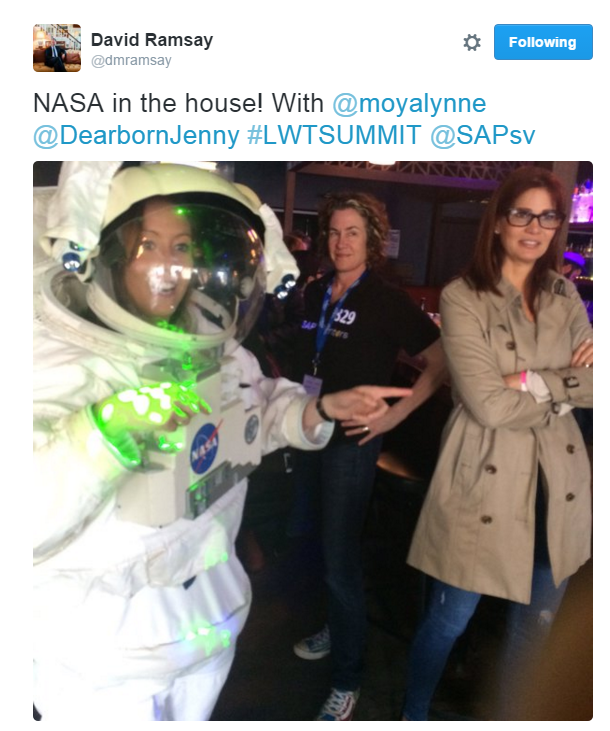 Recast your role, like Lisa Davis, who loves being in a room where nobody looks like her. Only woman in the room? Only queer? Only person of color, differently-abled, differently-aged, differently-sized or gendered or anything else? Make that your absolute strength. This goes for everyone. We all have a freak-flag to fly, even if you feel you’re the straightest, whitest person in the room. Fly it.

Look outside your tribe.

If this speaker list does not look like any tech conference you’ve ever been to, it is living proof that you do not need to accept excuses. We’re here. During these jam-packed days we were treated to amazing talks by technologists from every stripe including rocket scientists and NASA engineers, researchers, software engineers, data scientists, user experience experts and beyond — mostly women, many transgender, with a huge percentage of women of color. “Be responsible for questioning that post-interview report that ‘she’s not a good fit,’” said Caitlin Kalinowski of Oculus (Facebook). If you’re hiring, did you also know that referrals are the enemy of diversity? Referrals from homogeneity lead to homogeneity. Look outside your tribe.

We heard this refrain often: “Don’t give up: This is not easy,” said Jenn Van Dam from alphalab during Saturday’s sessions. As Kara Swisher put it: “I work harder than anyone else.” All the people at the tables, at the Career Fair, in the break-out sessions, hackathons, Tech Crawl, and on the show floor would probably agree. Tireless and fearless Lesbians Who Tech founder Leanne Pittsford would agree. And the ultimate tireless advocate, 86-year-old Edie Windsor, still working on human rights and as a role model for technologists everywhere — would agree.  Work hard.

After three days of a solid SAP sponsorship of Lesbians Who Tech, I can say for a fact that this is true: it’s hard work, but it’s the best work ever, and I think the small army of my peers who joined me there would also agree. Here’s some of how we worked hard:

So yeah we worked hard.  You can too. Then you’ll be tired, but no longer tired of excuses. Which rocks.

Before I leave you with a few more images from the Summit (also known as: what our tech companies could look like), I invite you to stay in touch with me if you’re also interested in making a difference. We’re right here.

PS: I’m considering a diversity-related hackathon later in the year at SAP Silicon Valley. Let me know if you want to pitch in. 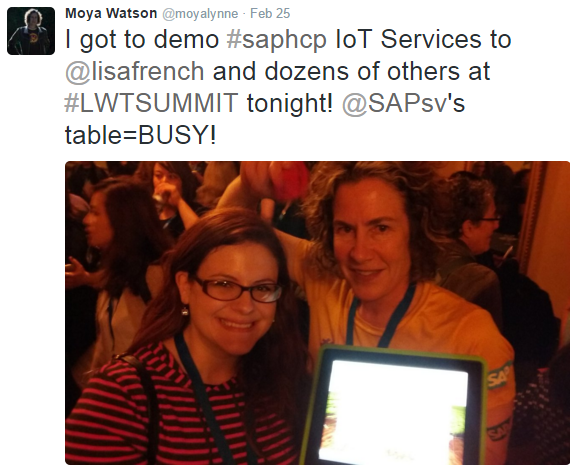 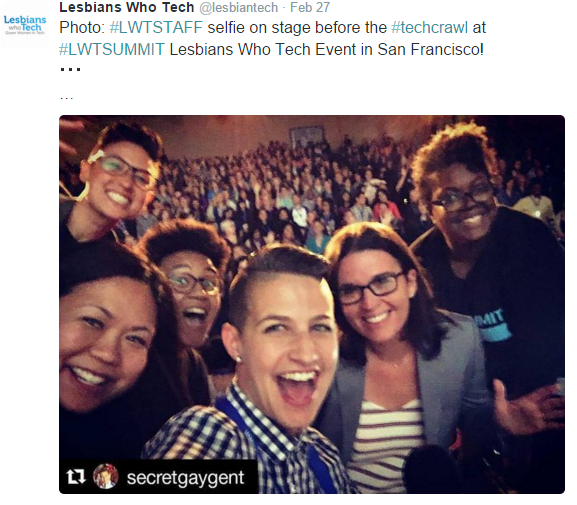 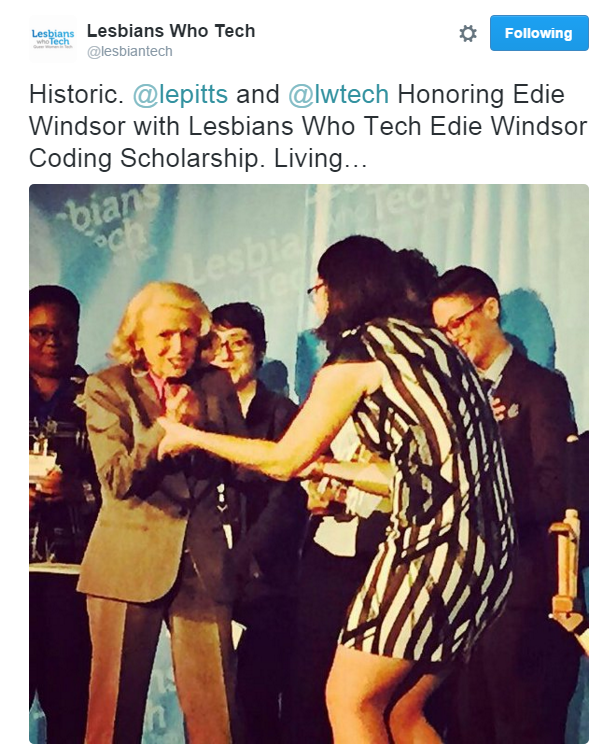 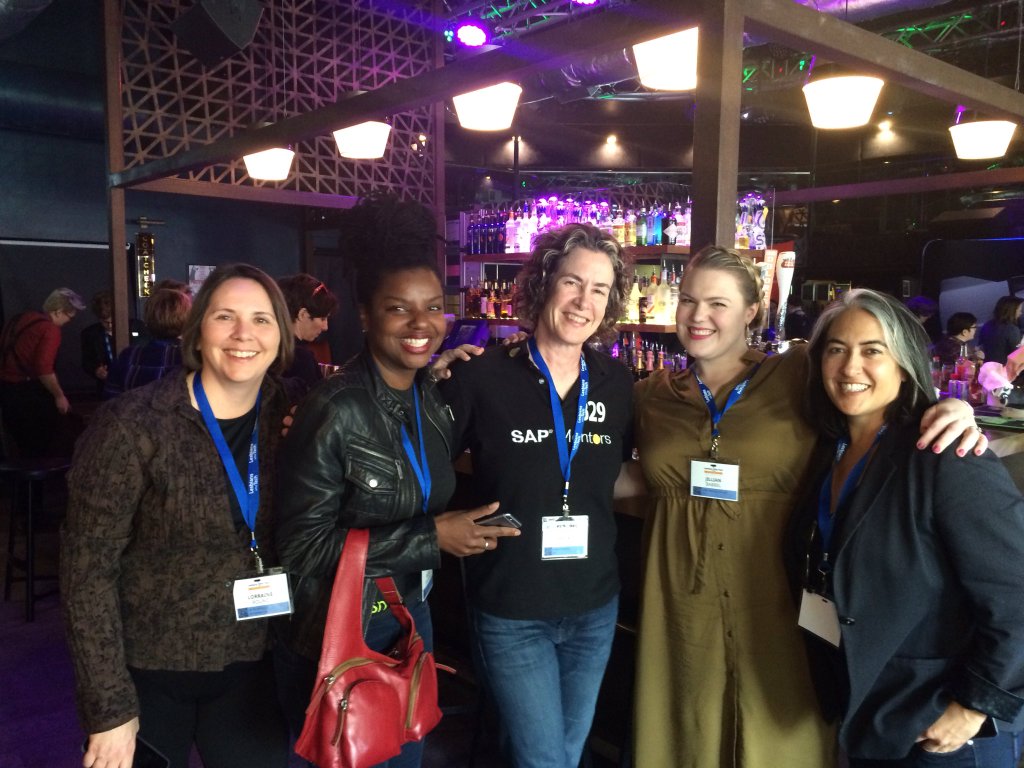 Special thanks again to our dedicated recruiting team of five folks, pulled together by Linda Lioe and Vanessa Burnaby. See you next year, Lesbians Who Tech Summit! 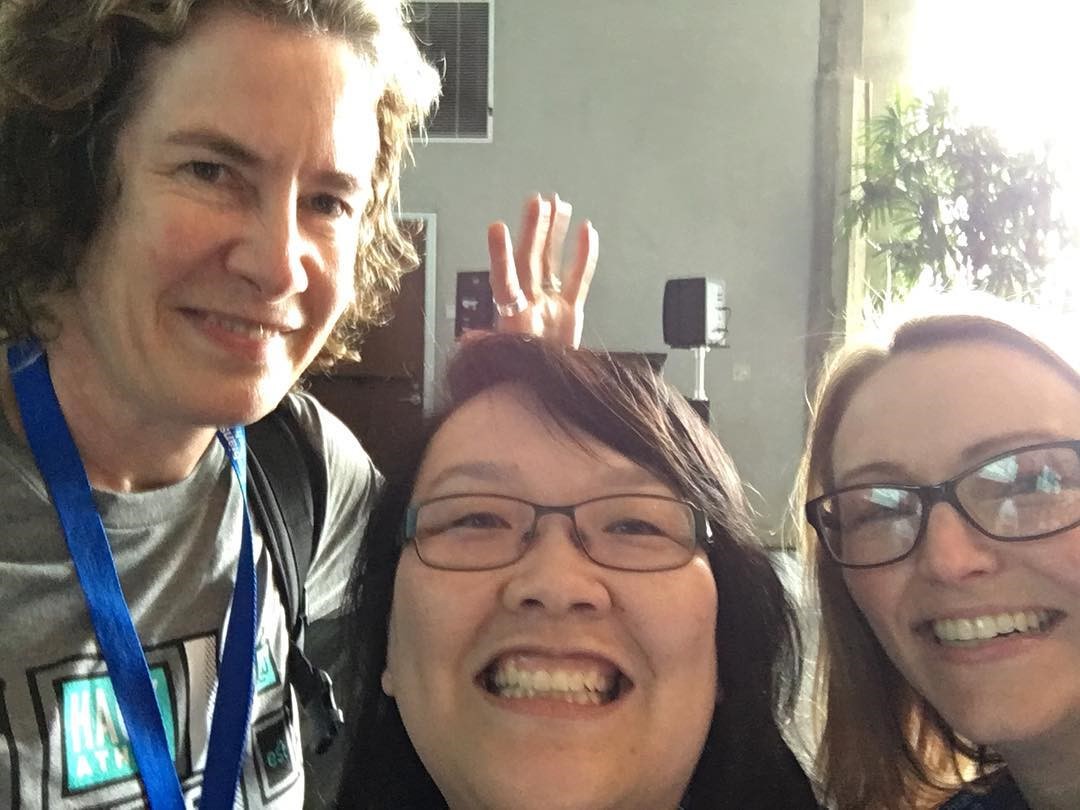 I am so so so proud to say I worked alongside you, blogged alongside you, participated in Tech Events alongside you dear Moya. Your advocacy, intelligence, commitment and compelling advantages are an asset to SAP and the tech industry at large.  So very thrilled to read this event summary.  Jealous that you got to meet Kara Swisher ;-).

Thanks for making inclusion a fact rather than a concept.

Thanks Marilyn - sending your kind words right back to you!  Sad that "worked" is in the past-tense, but I hope we keep it up together because you'll always be the trailblazing role model at SAP.  As for Kara Swisher: Alas I didn't meet her directly ("She scares me..." is what most people say about the experience 🙂 ) but since she's been to all of the Summits so far (last year she interviewed Benioff) it may only be a matter of time!  Stay in touch!

Wonderful blog Moya!  It sounds like (per your blog and tweets) it was an excellent event and am glad you were able to attend.  I love the phrase

We all have a freak-flag to fly, even if you feel you're the straightest, whitest person in the room.  Fly it.

Well done and to echo Marilyn's previous comment, I am so glad to know you as you are such an amazing person.

RIGHT Karin? We all have that flag, at least I believe we do!  Thanks for being a huge inspiration yourself within the SAP community and beyond!

Great article! I did not know an event like this even existed!

please keep in touch with me Camille! there is more to come!  depending on where you are in the world, Lesbians Who Tech has chapters worldwide.  plus we'll continue to collaborate right here in the Bay Area!  hope to meet you soon.

I am in NJ but I do travel to Florida (Tampa area) quite often. 🙂

Thank you for all that you do, Moya! I loved reading about the incredible success of this event and I look forward to continuing to work together in 2016 to spread more messages like this.