New challenges and opportunities arise as Europe’s Copernicus programme continues to launch the Sentinel satellites, converting their data into accessible products that can benefit citizens. The Space App Camps give developers the chance to deliver data from these and other satellites to the everyday user, via mobile apps. Five teams from Germany, Austria, the Netherlands, the UK, Greece and India were selected by an expert jury and invited to participate in this second camp, which ran for three days at the SAP stand of the Mobile World Congress in Barcelona, Spain. 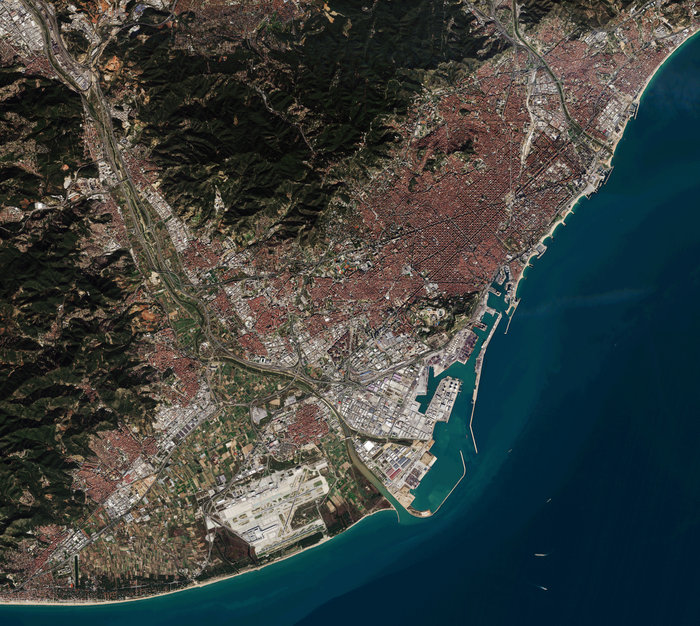 The team BuildingRadar from Germany is the winner of the prize for best app at the Space App Camp held in Barcelona. Developers of the Building Radar App, which uses satellite data to supply verified construction tips that enable users to focus on sales, took home the trophy of this Spanish event. Building Radar allows customers to keep up with any construction project in their neighbourhood and around the world, tracking competitors’ next moves and evaluating new strategic partnerships, in one smart platform.Building Radar is currently hosted in ESA’s Business Incubation Centre in Bavaria, Germany. 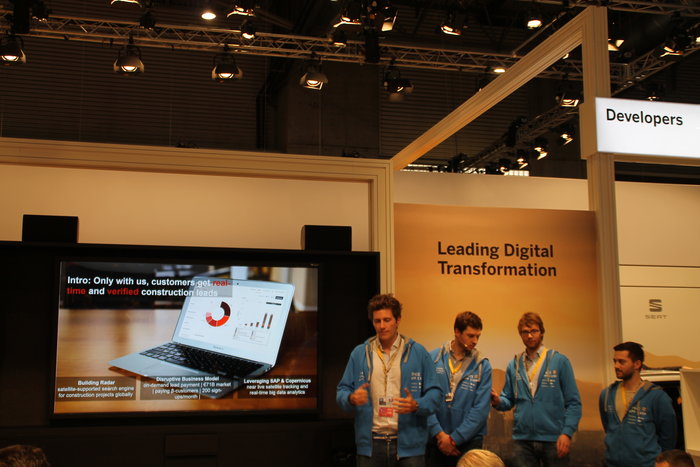 The camp is managed by the CIO Center for Digital Leadership team at SAP, initiated by the European Space Agency (ESA) and organized by the Anwendungszentrum GmbH Oberpfaffenhofen (AZO). Startups and young talents representing five countries across Europe and Asia were challenged by SAP and ESA to develop apps on SAP HANA Cloud Platform that utilize Earth observation (EO) and business data to support the future of retail, construction, agriculture, climate and farming.SAP HANA Cloud Platform provided a unique in-memory database and business application services for the teams to quickly build, extend and integrate modern, mobile-enabled apps with ESA’s accurate, timely and easily accessible EO information, in particular Copernicus data.

The final round of the Space App Camp challenges five top startups out of several dozen evaluated teams from the ESA startup network. Each team, composed of two to four members and supported by SAP and ESA experts, demonstrated how EO and business data can be used to run the world better in the areas of retail, construction, agriculture, climate and farming. collaboration with ESA helps us to combine the power of SAP HANA Cloud Platform with ESA’s accurate, timely and easily accessible EO information. This is digital innovation at its best, and it helps to shape the future of the digital economy.”

The team members participating in the Space App Camp represented Germany, Greece, India, the Netherlands and the United Kingdom, and competed for the “Best App of the Space App Camp” prize. The winning team, BuildingRadar, won €5,000 and will be considered for the SAP Startup Focus program. As part of its ongoing collaboration with ESA, SAP intends to work together with the startups incubated in the ESA Business Incubation Centres across Europe, through which ESA supports over 400 startups making use of space technology and space data. This collaboration aims to provide SAP with access to hundreds of new ventures.

Other apps developed during the Camp included the GAIA App, which allows farmers to benefit from early warnings and predictions for evaluating crops at risk, and the VanderSat App, which will present a service designed to aid the Dutch government in inspecting agricultural fields.The WxFusion App provides near-realtime thunderstorm detection and forecasting up to an hour in advance for much of the globe, which would benefit aviation. The Weatherlogistics App presents several forecast products, resolved on a fine spatial scale for user-defined farms.The CIO Center for Digital Leadership helps manage SAP’s own digital transformation, showcases its approach to customers, and drives digital platform-based innovation in an open ecosystem with SAP employees, student teams, and start-ups. It puts the leader at the center of everything and addresses digitalization holistically.