Core Data services (CDS) are domain specific languages (DSL) and services for defining and consuming semantically rich data models in SAP HANA. They are integral part of SAP HANA, and can be leveraged in the ABAP stack.

Support for CDS in ABAP begins with ABAP 7.4 SP2. Especially with SAP NetWeaver ABAP 7.40 SP5 additional capabilities like CDS Associations are supported. CDS Associations can be used to replace joins with simple path expression in queries.

The goal of ABAP CDS is to fully support the SQL-92 standard and beyond that to support additional features likes associations, entities, create, read, update, and delete (CRUD) and OData Services. ABAP 7.4 SP05 support code to data paradigm. ABAP stack manages all entities and deploys all artifacts from ABAP layer into the database layer. ABAP server act as master for developing, managing and calling HANA views.  On Activation of CDS views two objects are generated one CDS Database View and other CDS entity.  CDS views are defined for existing database tables, any other views or CDS views in ABAP dictionary. Syntax for defining CDS view is similar to SQL.

To create core data services ABAP Development Tools for SAP Netweaver is used. ABAP workbench does not support the new type of ABAP repository objects called “DDL Sources”. DDL statement DEFINE VIEW and SQL like syntax is used to define the view. Annotations marked with @ sign provides additional metadata such as how to buffer view records, SQL view name, client dependency and reference between quantity and amount columns and the corresponding currency and unit code columns.

The annotation @AbapCatalog.sqlViewName is mandatory, and specifies the  name of DDL source in the ABAP Dictionary and the database.  On Activation of DDL source two objects are created CDS database view and CDS entity. CDS database view can be accessed using SE11 ABAP dictionary. These representation are generated, updated, and deleted automatically when activating DDL source.

In the above example simple CDS view, “ZCDS_DDL_SAMPLE2” is CDS ABAP Database View and “ZCDS_SAMPLE2” is CDS entity. CDS entity can be identified using “DEFINE VIEW” syntax and CDS ABAP Database view can be identified using “@AbapCatalog.sqlViewName” annotation which on activation accessible from SE11- ABAP Dictionary View. Same applies to all the examples shown below.

Here CDS view with column list with curly brackets and using column alias to rename a column is shown. Column list are comma separated and alias names are given with keyword ‘AS’. 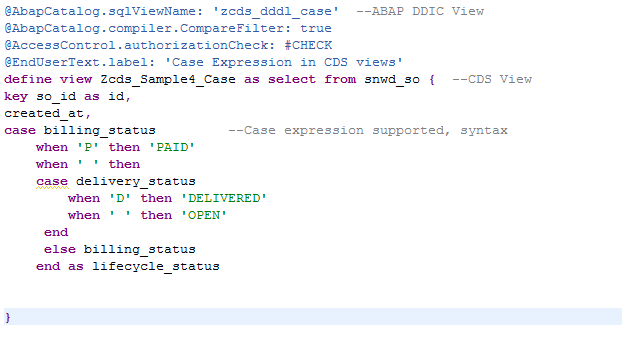 ABAP CDS support INNER joins, LEFT OUTER joins and RIGHT outer joins. Join conditions can be inserted before or after the select list. Brackets are used to implement complex join operators. When joins are used asterix is not supported in SELECT statements.

Annotations specify additional information such as how records of the view should be buffered by ABAP table buffer, whether view is client dependent or not. By default CDS views are client dependent and there is no need to include client fields explicitly in the field list or in the join conditions.

Through ABAP CDS calculation of aggregations, grouping records and filtering groups are supported. GROUP BY and HAVING are used.

Simple and complex filtering conditions are supported. It is also possible to include WHERE conditions in CDS view definitions.

The open SQL SELECT statement is used in ABAP to select data from a CDS view. ABAP Dictionary View name, respectively SQL view name of the CDS view is used in select from clause.

Hope you find this blog helpful.

In my next blogs I will try to touch how to create CDS view, different ways to expose CDS views as OData Service and Associations in CDS views.

Your suggestions, feedback, comments on this blog are most welcome.

Note: This is my previous SCN for the new and latest blogs please follow my new SCN blog https://people.sap.com/reddypavankumar

Thanks for your review Venka

Nice blog..keep posting further ..it is very helpful..Thank you

Nice blog and easy to learn

Very nice stuff. Just one comment to using the SO_ID in GROUPING BY. Using SO_ID it's probably no good idea as SO_ID contains IDs. IDs are usually unique and therefore the GROUPING BY won't work. Even if you define it like "substring(so_id, 1, 2) as id" the GROUPING BY will still use the whole SO_ID and not only the the first 2 characters.
But I think you maybe did it for purpose, because it made me really hard times and I learned even more

any idea how to output extra columns from union? i'm trying like null as XX but error says unexpected word null.

Extremely useful article. Since we have an array of annotations in CDS and those have robust functionalities attached with them, anything on that could be a great help.

Can you send me the exact difference between Basic and Composite view...

When I try to create a CDS View as below to extract data to BW, it tells that detectDeletedRecords is not supported, do you know why and are you facing the same issue?

I am not facing any issue. May be you are using lower version that is why you are getting error.

When I try to create a CDS View as below to extract data to BW, it tells that detectDeletedRecords is not supported, do you know why and are you facing the same issue?

Can you please help us what is wrong and why it is not supported. The SAP version is SAP S4 HANA 1610 and HANA client version is