Apple co-founder Steve Wozniak is still disrupting industries, four decades after he teamed up with Steve Jobs to develop and sell the Apple I. Wozniak is about a month away from shaking up the world — or geekdom at least — with the inaugural Silicon Valley Comic Con, which could wind up looking like the festive spawn of Comic-Con International: San Diego and the International Consumer Electronics Show.

SVCC is actually the brainchild of Wozniak and Marvel Comics icon Stan Lee, and it promises more than just a convention center full of fans dressed as their favorite science fiction characters. The event will also feature:

“I’m excited to finally have a Comic Con with our very own flavor,” Wozniak stated on SVCC’s official page. “Now being a geek, or being different is cool — and Silicon Valley Comic Con celebrates being a geek!”

A Date with Disruption

SAP has also been known to celebrate geeks — and other tech users. And that’s where Wozniak and disruption will cross paths again, when he delivers the guest keynote address to the Americas’ SAP Users’ Group at SAPPHIRE NOW + ASUG Annual Conference in May.

“I don’t like to do the same thing as everyone else,” Wozniak stated in Fast Company last week. “I always like to be first at something, do something different on a different track.”

That pioneering spirit helped Wozniak create the personal computer as we know it — and found a technology juggernaut. And he is certain to share his thoughts on disruptive technology and the computer revolution with SAP and ASUG’s global business technology event in Orlando.

“I wanted people to come and share an experience and meet other people,” Wozniak said of SVCC. “A lot of people get inspired and motivated by the same things.”

SVCC will take place from March 18 to March 20 at the San Jose Convention Center, which is coincidentally about a mile from the SAP Center at San Jose. SAPPHIRE NOW (#SAPPHIRENOW) and the ASUG Annual Conference (#ASUG2016) will run from May 17 to May 19, with Wozniak speaking on May 17, two days before Coldplay plays Concert Night.

Both events are sure inspire Wozniak and his fellow disruptive technology lovers.

VIDEO: Why Finance Would Be “Running Blind” without Real-Time 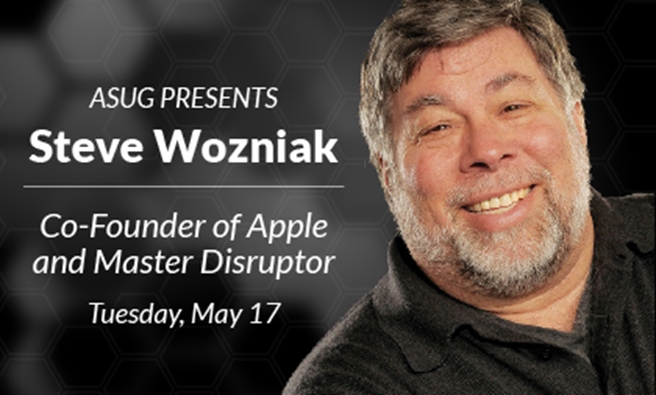 Great catch! since i won't be attending please say 'Hello' to Steve from me.