Unbelievable! That’s what would you say if somebody told you that in Manila, a metropolitan area with 10 million inhabitants, a 2.5 hour drive would cross only 5 km.

Impossible! If someone said that 2.5 hours away from this city there is a school in a rural area with 10.000 students and there the average classroom has 50-60 children.

No way! That would be your first thought after learning that a High School student from that place, who had English classes for years, was not able to read a couple of sentences from an english text book.

I guess you would not believe it until seeing the proofs of such statements, but these things DO happen and I have seen them when I went to Manila, the capital of the Philippines. The origin of the city’s name come from King Philip, an spanish King who sent ships there some hundreds of years ago and colonized this archipelago formed by about 7.2 thousand islands.

The spanish influence is still there and can be seen in some of the words they use, in streets and names/last names of the majority of the population. It has been mixed with their eastern culture and also the american influence which came after World War II,

but, WAIT, what does it all have to do with SAP?

Well, SAP is committed to helping the world run better and improve people’s lives so it is sponsoring a worldwide program called “SAP Social Sabbatical” where employees from differents departments and locations are assigned to work on challenges from Social Enterprises and NGO’s. In Manila we’re currently a group of 12, from 9 different countries speaking 7 different native languages, but the whole program at SAP has 120 participants in 10 different locations in Emerging Markets across the globe. 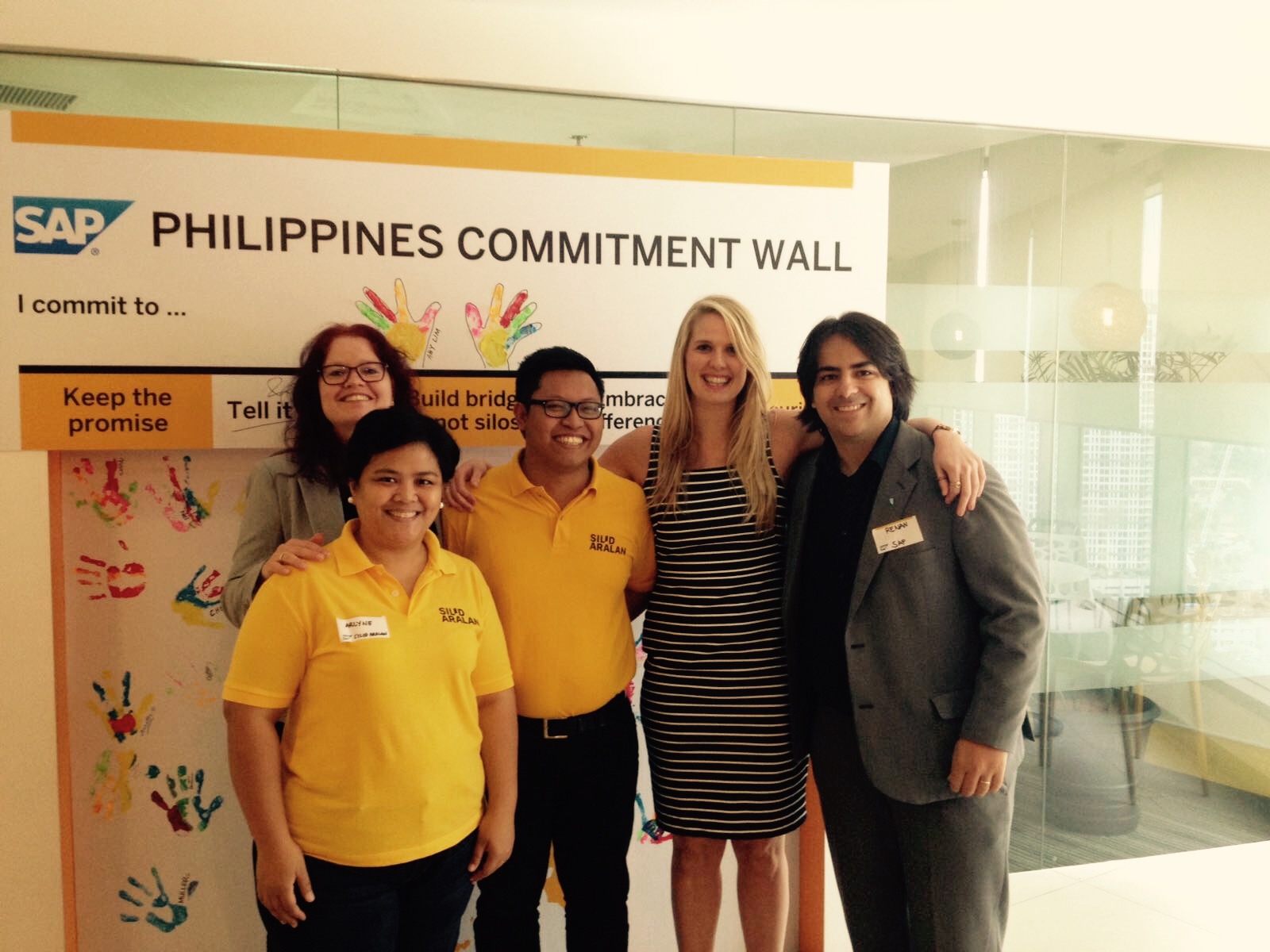 Here I (Renan Correa, a humble contributor of SPED & NF-e and Comunidade SAP em Português (Portuguese Language Community) ) have met Rebbeca Hamilton, an Enterprise Support Delivery Manager from USA, and Bettina Zleditz, an Senior Solution Manager from Germany and we formed a team which was allocated to support an NGO called Silid Aralan. Silid Aralan means “classroom” in Tagalog ( the local language of Philippines ) and it’s an NGO focused on helping underprivileged children that are low-performing students.

In our third day in the country we met Arcie Mallari, the founder of Silid Aralan, for the very first time. He has a truly inspiring story of how one person with very limited resources could create a network of commited people that can completely transform the future of so many children/teenagers, people that thought they had no future at all. By inspiring the children to learn and motivating them to think about the future Silid Aralan is doing what many would say it’s impossible.

You can see some of the results the Silid Aralan learners achieved in the two short videos below:

Our challenge here in the Philippines is to help this amazing organization design/document their processes and create a Go-To-Market approach so that it can expand to several regions of the country and improve even more peoples’ lives.

Using Design Thinking methodology we started to brainstorm ( and pin post-it’s pretty much everywhere ) what would be the most important processes, the main stakeholders and we also got to know the whole operation of Silid Aralan. 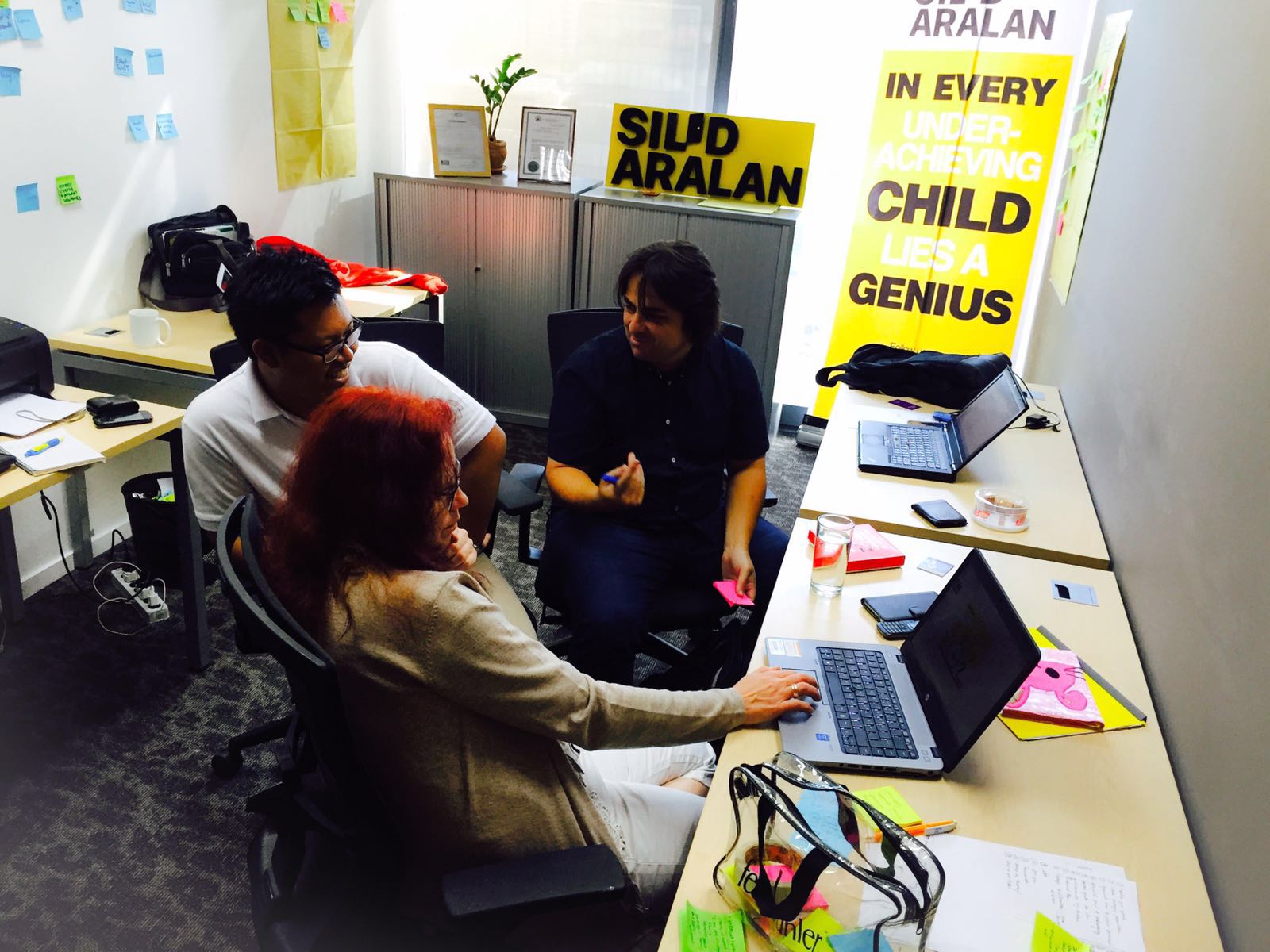 In one of the most remarkable moments of our lives, me and my teammates, went to Montalban, a city 2.5 hour away from Manila, where Silid Aralan has both its headquarters and a learning hub in a public school. We planned a day to interview all the stakeholders such as university dean, school principal, teachers, parents of learners and learners of different ages so that we could incorporate their feedback into out work.

We went to a public school that has approximately 10.000 students and we saw a river of small learners going in and out of the school during noon. That happens at this time because they work in two shifts to accomodate all the students. It was an invaluable experience because most of these children never had seen a foreigner before and they were amazed to see us over there. They were so happy and excited, coming to us to “High-Five” and touch us or ask where we are from or just stare at us. In a few seconds we were surrounded by them and we had a one in a lifetime experience also showing a little about our countries to them. 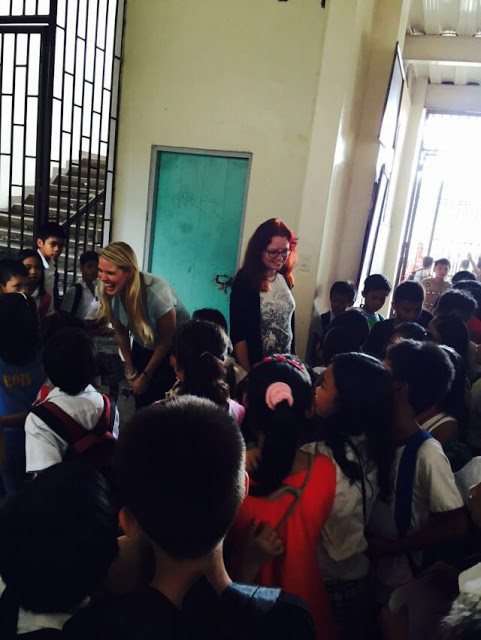 It’s truly inspiring to see that despite all difficulties they are still small children and above all they are happy and just want to be happy in their lives. There are some many stories we heard during this day and over the last week that do no fit in a blog post but we’ll be posted forever in our hearts.

We hope to continue helping Silid Aralan over the next weeks and that they reach their goals to expand their operations and reach more children in the Philippines.

By the way, if you want to help them in this long journey you can do so on their website: http://silidaralan.org/index.php/support/

Even a small contribution will make more children smile and have a decent future!

Hi Rena, What we can do ? No just for poor people in other countries, but also the poor people in Brazil. Maybe free SAP courses. What do you think ?

Thank you for the question, I think that is the first thing that comes to the mind of anyone that watches the results of such social programs.

In Brazil there are many institutions doing similar work and they need any kind of help. Support does not always mean money (we know it also helps) so it can be your spare time to teach them something you know or organize a school supply campaign, it also can be your old PC, your old CellPhone or even a piece of furniture you don't want anymore.

I live in Sao Leopoldo and there I have already seen the great work of the "Instituto Lenon Joel Pela Paz" which is doing also children empowerment and helping them during the opposite shift of school.

At SAP we have the Corporate Social Responsibility area which also organizes donation of computer, school supply and christmas dream campaigns, we donate Cooking Oil for NGO's that recycle them into soap bar so we're always looking for what we can do to maximize the return for them.

I also think that free courses can help and that's why SAP is also investing in MOOC such as openSAP | Enterprise MOOCs: Learn anywhere, anytime and on any device! but in several cases investing in basic education and also life coaching generates better results as most of these people only need a small "push" to unleash their potential.

thank you for this great blog, Renan! It is very clear to see that Silid Aralan's work is leaving a deep impression on you. I am looking forward to learning more about what the 3 of you are achieving in terms of impact & results for Silid Aralan. Less than 2 weeks to go, but plenty of time to make a difference:).