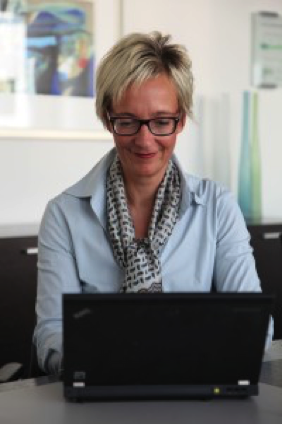 Christine Regitz is a volunteer member of CyberMentor, an initiative that provides support for girls and young women in Germany who are interested in pursuing technical careers.

CyberMentor is targeted specifically at female school pupils between the ages of 12 and 18 who are interested in careers in the so-called “STEM” (science, technology, engineering, and mathematics) subjects. The aim of the initiative is to make girls and young women aware of the opportunities that are open to them and to guide them in their choice of career. Each pupil is matched for the school year with a personal female mentor who has experience of working in a STEM career. Mentor and mentee then communicate via a protected platform on topics relating to school, study programs, careers, and day-to-day working life. Christine, who has guided numerous mentees over the years, recalls one particular 17-year-old who contacted her in state of great excitement to report, “I know exactly what I want to do! I want to study aerospace engineering!” It’s moments like these that motivate Christine to continue encouraging young women to pursue careers in science and engineering. “We need women in technical careers. Take cars, for example. They’d look very different if more women were involved in designing them. For a start, as well as having electric windows, I’m pretty sure they’d be fitted with automatically retractable kids’ seats too,” she says, adding, “Women are an asset in every field of technology.”

As well as offering her services as an e-mentor, Christine has also been a volunteer member of the non-profit German Informatics Society Gesellschaft für Informatik (GI) for many years, contributing to the work of the GI’s committee on women in computer science. Because she knows from personal experience that women who are interested in STEM subjects often face considerable hurdles. Christine herself placed mathematics, physics, and computer science at the top of her priority list while she was still at school. “But if you don’t know anyone who can support you, you’re completely on your own,” she recalls. For example, she was advised to steer clear of studying mathematics ‒ her personal preference ‒ because of the apparently less-than-exciting future prospects it offered. “I would have been so grateful to have had someone who could give me expert guidance in making my decision. And somebody to allay my fears. As a girl interested in science and technology, you tend to think there’s something slightly wrong with you.” This is where the volunteers from CyberMentor can be particularly helpful, because they offer comprehensive support and show girls and young women that it’s perfectly OK for them to be interested in science.

The figures are ample proof that the CyberMentor concept is an effective one: an incredible 70% of all the young women who receive mentoring support go on to study a STEM subject at college or university.

Want to join one of the world’s largest and most diverse cloud tech companies? Apply to SAP today! http://bit.ly/1RRCoe8