I still kind of can’t believe that I’m the SAP Teen Innovator, and I got to go to Super Bowl 50 with my mom, dad and younger sister because I won a competition for my idea.  When I heard about the Social Innovation Series event at SAP’s Newtown Square office, hosted by SAP and GENYOUth as part of GENYOUth’s AdCap program, I didn’t know I’d be pitching an idea with other students all hoping to win money for that idea.  The stage in the auditorium was huge!  I won that day and won a trip to Super Bowl 50, plus $10,000 to build out my idea, a community wellness app.

That all happened in October, and when I got the call and found out I was selected to be the SAP Teen Innovator I was excited and nervous.  Part of being the Teen Innovator meant meeting with people at SAP’s office in Palo Alto to help me develop the plan and design for my app.

Besides my dad, my family’s never been to California. My mom came with me to SAP, along with Rusty and Courtney from the AdCap team, and Katie Morgan who planned a full day for me.  SAP’s office is a big campus with nine buildings that connect with these really cool paths behind them.  I think one of my favorite parts of seeing the office were these trails and the gardens, which grow food for the kitchens there.  I walked the trails a lot and my trip to SAP started with a tour from Katie. I also did an interview on Periscope, which I’ve never used before! 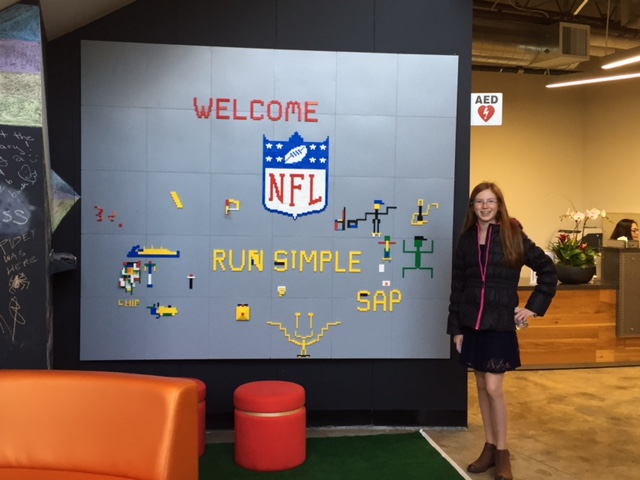 My first meeting was with Kathy Bird, who’s the Director of Employee Communications for SAP.  She works out of the Newtown Square office so we met using telepresence.  You feel like you’re in the same room when you’re talking to someone!  Kathy told me about her work and SAP and how she helps people who communicate differently find ways to talk to each other.  It was really helpful for my app and my AdCap Project Designer because I know that I’ll be talking to students, teachers and maybe parents to let them know about my app and get them interested in using it.

I told Katie that I was most excited to visit the SAP d-shop, next.  The d-shop is filled with stuff like 3D printers and robots, and SAP employees go there to try stuff out and play because it gives them ideas that could help their work.  I tried out Oculus when I was there too! I almost fell over when I put the goggles on because you really feel like you’re on a roller coaster! 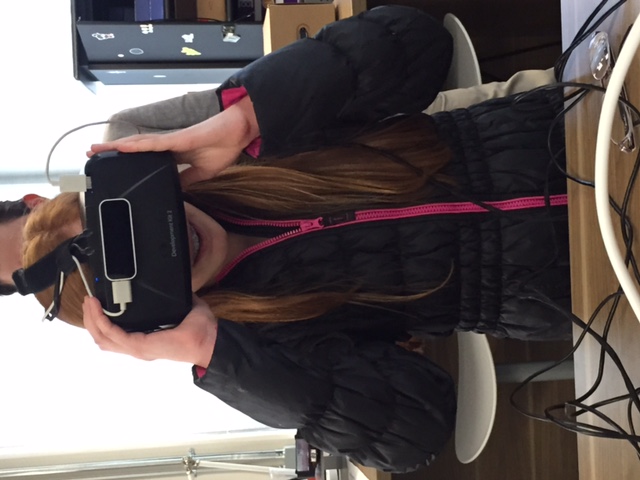 Probably the piece of advice that I remember the most came from my afternoon meetings with app designers and developers at SAP. They said before I come up with a solution, I have to love the problem.  Knowing what needs fixing helps you know how to fix it!  They also showed my how to break my idea down into smaller steps, which will help me bring it to life when I get back to my school.

After we finished at SAP my mom and I met my dad and sister and we went to the NFL Experience.  My dad and I did the 40-yard dash – I’m a runner so I love stuff like that! 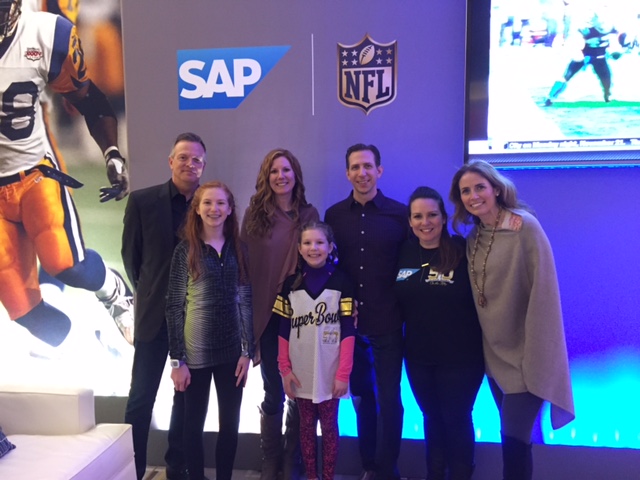 Friday morning we got down to Super Bowl City early to try out some stuff like peddling bikes that light up this big sculpture the harder you pedal.  If you win and pedal harder than your opponent, it lights up in your team’s colors. I got it to light up for the Broncos! I did other things too, like the Quarterback Challenge.  You wear the big Oculus glasses and you’re in the game and on the field with NFL players. I scored a touchdown!

I was nervous to go on stage at the SAP Fan Energy Zone. I worked with Katie Morgan from SAP CSR and the AdCap team and we planned an activity to get the fans there excited.  We gave away some NFL prizes and I challenged kids who were there to try different physical activities like holding planks and squats.  It was the best giving out prizes to fans.  Maybe they felt as cool as I did being up on that stage.  Alexis Glick, CEO of GENYOUth and Katie Morgan made me feel comfortable on stage, and at the end, SAP surprised me with new blue Nike running shoes!  I changed into them right away of course. 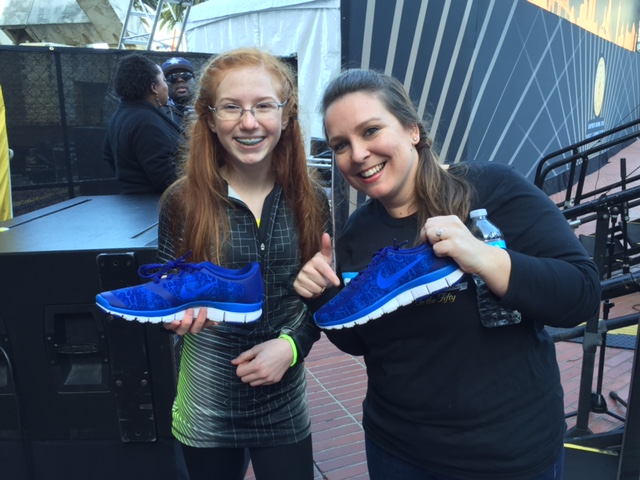 Did I mention that I also took over Alexis’ Twitter feed? She has 20K followers and she even let them know I’d be doing it.  Mostly I just wrote about how cool it was to take over.

My day ended meeting the President of SAP, Jennifer Morgan. She was so nice.  Everyone at SAP made me feel famous and important.  Dave Hutchison, who voted for my idea at the SAP Social Innovation Series event in Philly, was also there.  He gave me advice and also talked with my sister.

I met the Commissioner of the NFL and the Secretary of Agriculture on Saturday.  I won an AdCap grant and I’m the SAP Teen Innovator, but I’m also part of Fuel Up to Play 60.  GENYOUth and Fuel Up to Play 60 made a huge announcement with the NFL and USDA to give millions of dollars to schools.  I was there for the announcement as the student representative and spent fifteen minutes talking with Secretary Vilsack.  Also, Commissioner Goddell said that redheads are important.  Yeah!

In the morning SAP presented a giant check to me for being the SAP Teen Innovator.  I met New York Giants Wide Receiver Victor Cruz and NFL Alumni John Lynch who were up on stage with me.  Katie Morgan was there with my family and me and then said goodbye we went into the Levi Stadium. These few days have made me feel so special and ready to do my AdCap Project.  So much has changed since I went to the event at SAP’s office.  I was nervous to pitch and now after being on the local news and going out to Super Bowl, I have the pitch down.  I think I’ve changed too.  I can be quiet.  My mom says wallflower, but I feel more comfortable asking questions and I’m ready to make my app. 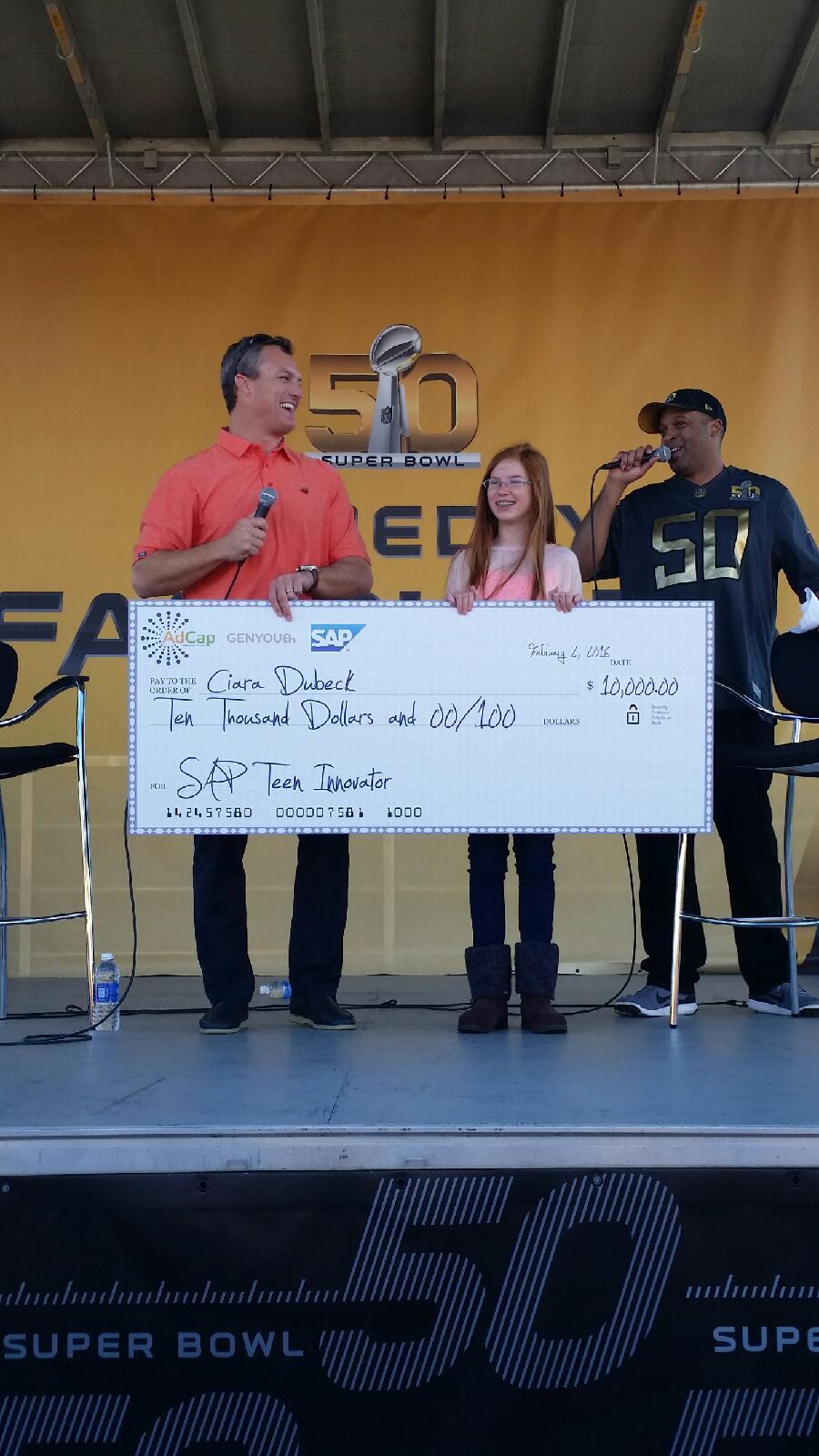 I’m so grateful to SAP and AdCap for this opportunity and for believing in me.