For example “New/In Progress” along with “Completed” workitems remain in the UWL Inbox despite a manual refresh or action change. 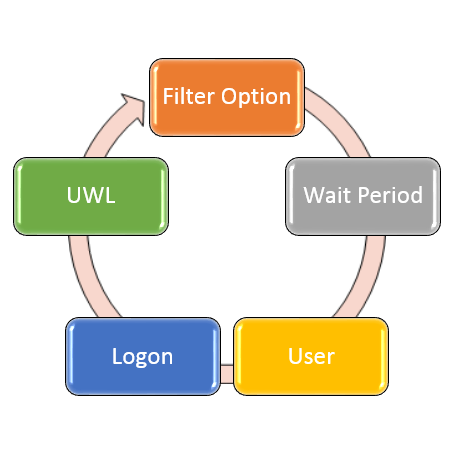 Why is the change not immediate?

When you open and run the UWL Service it takes a total of 5 minutes for all the tasks to be loaded up and represented back to the end user in graphical format as this is standard behavior.

The UWL works using two Pull operations. Firstly tasks are pulled from the backend into the UWL cache and they are then pulled a second time from the cache into the UWL User Interface. Due to this architecture there is an inherent delay in the automatic refreshes of the UWL. There is no way, in the current architecture that the UWL can refresh instantaneously. This is upon inital load as the cache must be built first upon logon so there will always be a delay. Real time refresh in the latest versions, is only when you complete a task. The Universal Worklist Task Filters follow the standard underlying functionality of the UWL refresh mechanism.

Let us remember that if you utilize the UWL within an environment that contains hundreds of work-items and end users there will be a lot of background activity each and every time the UWL is loaded. Reviewing the UWL core parameters and striking a balance among them is one of the best methods to create an optimal setup. The standard behaviour of the UWL remains that you will need to wait for 5 minutes for these changes to be updated regarding the workitems.