A New Generation Of Disruptors At Super Bowl 50 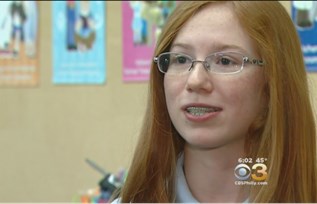 The Super Bowl is one of the most popular sporting events in the world. As part of such a large-scale program, SAP partnered with the health and wellness nonprofit, GENYOUth, as part of their social entrepreneurship program, AdVenture Capital. Together, the partners initiated the Social Innovation Series, a five-city national tour that gave young students the opportunity to showcase their entrepreneurial spirit.

Over 200 tech-savvy students from more than 47 school districts around the country pitched their ideas to a panel of business experts in a “shark tank” style competition. Of those 200+ students, eighth-grader, Ciara Dubeck, of Our Lady of Cavalry school in Philadelphia, was named the SAP Teen Innovator. Along with her title, Ciara won $10,000 to advance her winning Community Wellness App, an app that encourages students to eat healthier and remain physically fit through a system of points and rewards.

Dubeck was inspired by her fellow classmates, and now they can track progress with the app and receive awards throughout the year. It was that innovative thinking and desire to make a large-scale impact that won over the judging panel. As SAP North America President, Jen Morgan expressed, “We are extremely proud of this amazing young woman and hope she inspires more young minds to help solve today’s problems with unique, creative ideas.”

Ciara will have the opportunity to discuss her idea and inspiration with SAP executives in front of thousands of Super Bowl City visitors. After touring the Silicon Valley office, GENYOUth CEO, Alexis Glick, will recognize the SAP Teen Innovator on stage at the Fan Energy Zone.  SAP and Glick hope that Ciara’s experience will teach “invaluable skills that will help her move the project forward.”

As Ciara claims, “If you have an idea, and you work hard enough, you can make it happen.” Empowering the next generation of strategists, developers and entrepreneurs is an initiative that’s close to the heart of SAP.  In partnership with GENYOUth, students all over the country were encouraged to think outside of the box and disrupt the world around them by implementing a simpler way to monitor health and wellness.

To see all of the great ideas that came out of the Social Innovation Series, visit http://www.adcapyouth.org, and to follow Ciara’s experience around Super Bowl City, follow #SAPSIS.

For more on the Super Bowl 50 experience: