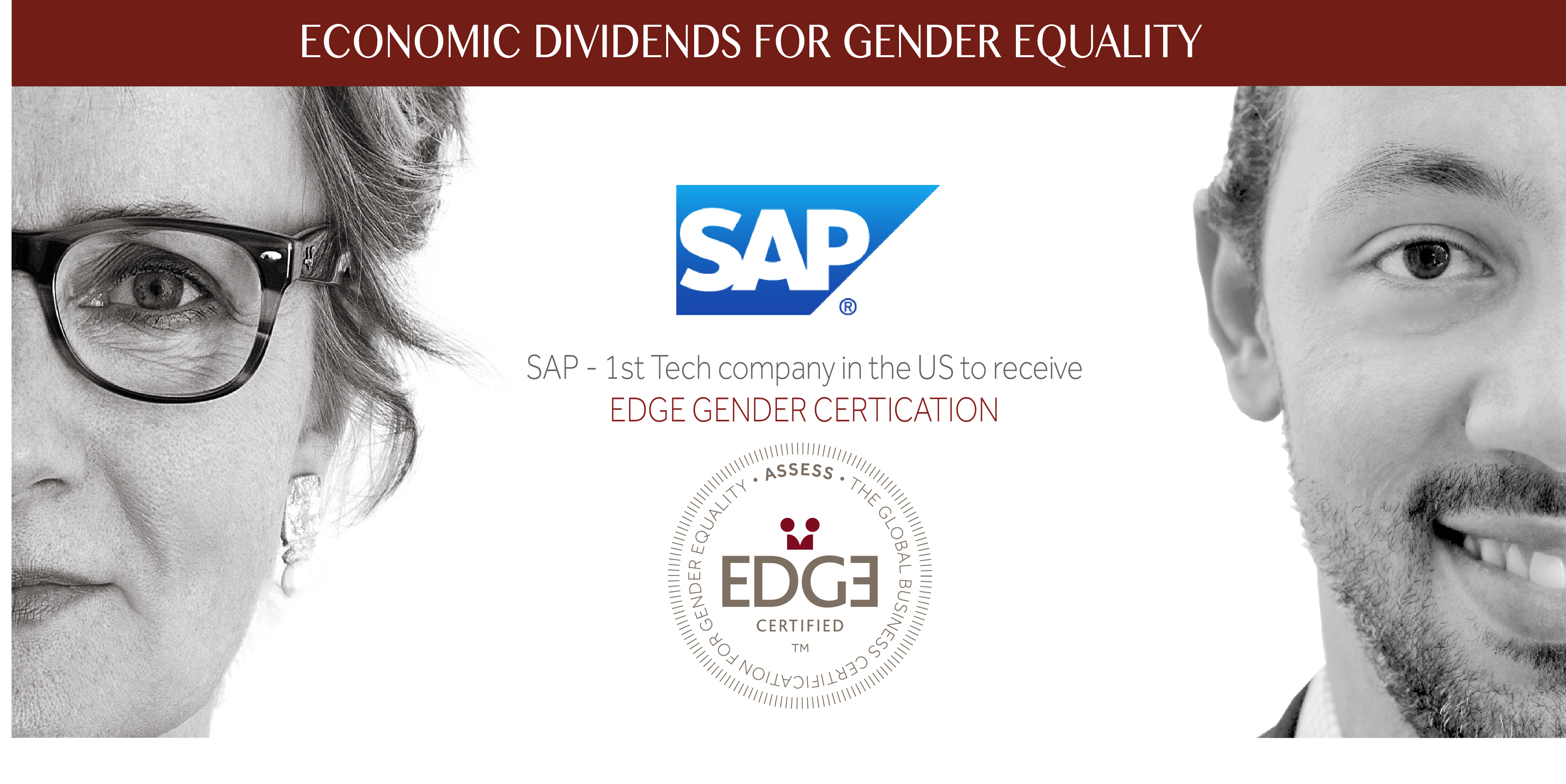 NEWTOWN SQUARE — SAP is the first technology company in the United States to be awarded the Economic Dividends for Gender Equality (EDGE) certificate in recognition for its commitment to gender equality in the workplace.

In an industry often cited for gender-imbalance, the certification highlights the priority SAP has placed on fostering a gender-balanced workplace.

“This recognition shows how committed we are to making SAP more gender-equal,” said Jewell Parkinson, head of human resources, SAP North America. “Not only are we holding ourselves to the highest, most transparent international standards, but we’re creating a road map others in the industry can emulate.”

Launched at the World Economic Forum in 2011, the EDGE certificate is the leading global standard and is recognized across all industries. SAP’s certification process began almost a year ago, and was awarded after a rigorous third-party review, in which company data and gender practices and policies were reviewed.

“The EDGE certification is another testament to the fact that SAP North America is leading our industry and region on diversity and inclusion in the workplace,” said Jennifer Morgan, president, SAP North America. “To be the first EDGE-certified technology company in the United States is a tremendous honor. There remains much work left ahead of us on these important issues but this is an important affirmation of our strategy to set the standard globally on these issues.”

At the end of 2015, women made up over 32 percent of the global workforce of SAP and held 23.6 percent of all leadership positions, a 4.2 percent increase from 2012. SAP has a board-level commitment to reach 25 percent women in leadership by 2017. 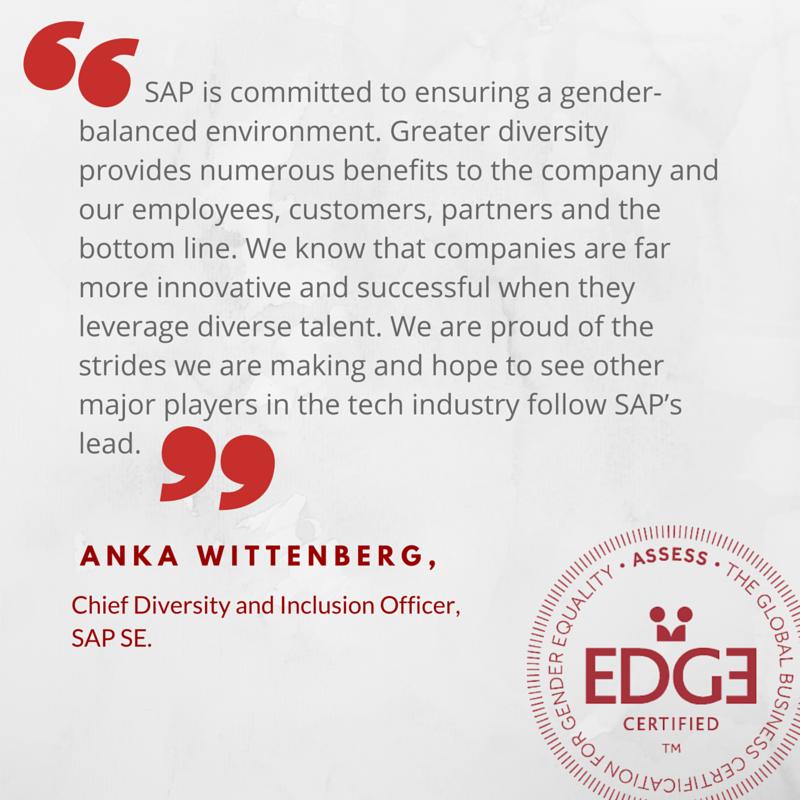 “The tech industry has long been exposed for its unimpressive record on gender equality. More often than not, their female talents have been acquired rather than developed in-house, with career perspectives that remained confined by stereotypical expectations around gender,” said Aniela Unguresan, co-founder, EDGE Certified Foundation. “Through their EDGE certification, SAP North America confirms that they are a trailblazer in attracting, promoting, retaining and motivating both male and female talents. By adopting such a strategic and structured approach to creating an inclusive workplace, SAP North America raises the bar for the entire industry and EDGE is proud to partner with them on this journey.”

“SAP is committed to ensuring a gender-balanced environment,” said Anka Wittenberg, chief diversity and inclusion officer, SAP SE. “Greater diversity provides numerous benefits to the company and our employees, customers, partners and the bottom line. We know that companies are far more innovative and successful when they leverage diverse talent. We are proud of the strides we are making and hope to see other major players in the tech industry follow SAP’s lead.” 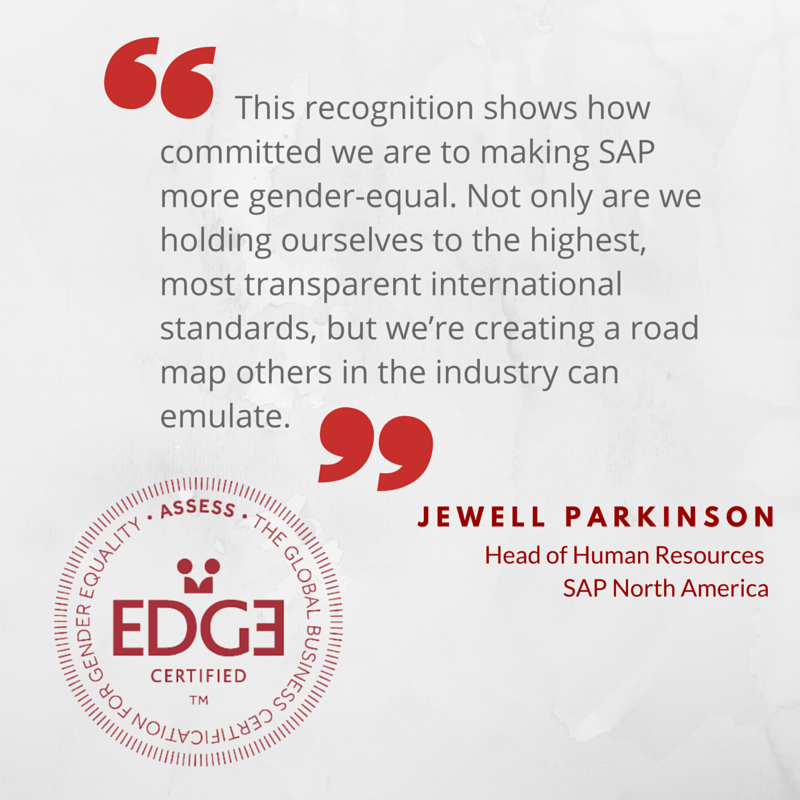 EDGE is the leading global assessment methodology and business certification standard for gender equality. The EDGE assessment methodology was developed by the EDGE Certified Foundation and launched at the World Economic Forum in 2011. EDGE certification has been designed to help companies create an optimal workplace for women and men, and benefit from it. EDGE stands for Economic Dividends for Gender Equality and is distinguished by its rigor and focus on business impact. The methodology uses a business, rather than theoretical approach that incorporates benchmarking, metrics and accountability into the process. It assesses policies, practices and numbers across five different areas of analysis: equal pay for equivalent work, recruitment and promotion, leadership development training and mentoring, flexible working and company culture. EDGE certification has received the endorsement of business, government and academic leaders from around the world.

Want to join one of the world’s largest and most diverse cloud tech companies? Apply to SAP today!http://bit.ly/1VPwh9M