Career Trends: Why It’s Imperative to Embrace the Algorithms in Our Future 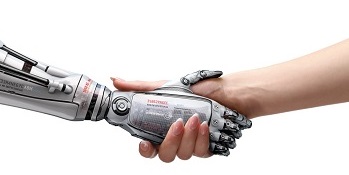 Remember Hal, the computer run amok in Stanley Kubrick’s 2001: A Space Odyssey? Forget him. The human vs. machine battle is so 20th century. Technology is not the other. It is an integral part of how work gets done. It’s time to replace fear of advanced technologies with the ability to work with them, and realize the opportunities they offer.

Innovations like machine learning, artificial intelligence (AI), autonomous agents, and virtual reality are deeply changing the workforce, rapidly transforming jobs once considered invulnerable to automation. We’re talking about sweeping changes encompassing employees in every industry, including knowledge workers and even hands-on service providers. Media outlets like The Los Angeles Times, Associated Press, and The New York Times have already begun using time and resource-saving software to write sports, financial and other kinds of news articles. Robots check guests in and carry their luggage to their rooms at the Henn-na Hotel in Japan. Drones are moving from military use to consumer recreation and product delivery. Gartner industry analysts predict more than three million workers globally will be supervised by a “robo-boss” by 2018.

According to Karie Willyerd, Workplace Futurist at SAP SuccessFactors, this shift is not glacial. During a recent VIDEO interview on the “Firing Line with Bill Kutik,” she said Oxford Economics research shows the Number One fear among employees is becoming obsolete – and with good reason. 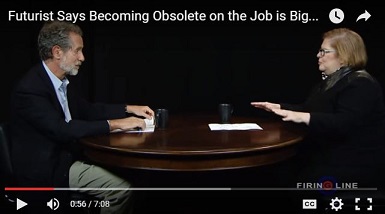 “Forty-eight percent of people have jobs that are going to be vulnerable to being replaced by automation,” she said. “And it isn’t just low-level jobs. It’s all the way through the spectrum. It’s a good fear to have, and it is not being paranoid. There is a robot coming after them.”

After watching the video, I talked with Willyerd for a little more context, including what employees should do. She told me that her latest book, “Stretch: How to Future-Proof Yourself for Tomorrow’s Workplace, features five practices people can follow to stay current, including how to network effectively and keep learning. The message for people at all stages of their careers is that they’re in charge.

“No one’s taking care of your career for you. It’s all on you to evolve to stay current,” said Willyerd. “Companies need to provide simple tools – a career GPS — that the workforce can easily use for development. At the same time, employees need to make sure they have the skills to wrap around whatever new technologies arise in their field.”

In a perfect world, algorithms replace not people, but the tedium of work, providing us with opportunities to be more strategic and creative. For example, software programs can collect and spit out the facts to produce a financial report. But only human thought, (at least for the near future), can create the narrative with insights explaining what the numbers mean, and ideal next steps for stakeholders. Willyerd said deep functional expertise in high-demand areas and emotional intelligence is the winning career-building combination of the future.

“As data explodes, the person able to ask the right questions and direct algorithms will be the most valued in the workplace,” she said. “There’s increasing concern we’re doing so much communication through devices that people are losing critical skills like the ability to establish rapport, negotiate with customers, and navigate organizational politics. Great leaders use their emotional intelligence to connect with people.”

Being afraid of technology and working on task-oriented processes are out. Critical thinking, insatiable curiosity and personal initiative are in.  It’s futile to try and outrun the algorithm breathing down your neck. Figure out instead how to use innovation to greatest advantage for your career and your company’s future. Hal would be proud.