In conjunction to my earlier blog on the Sequences Sunburst extension, this blog is about another similar sunburst chart called the Sunburst Zoomable Wheel, based on the Coffee Flavor Wheel below: 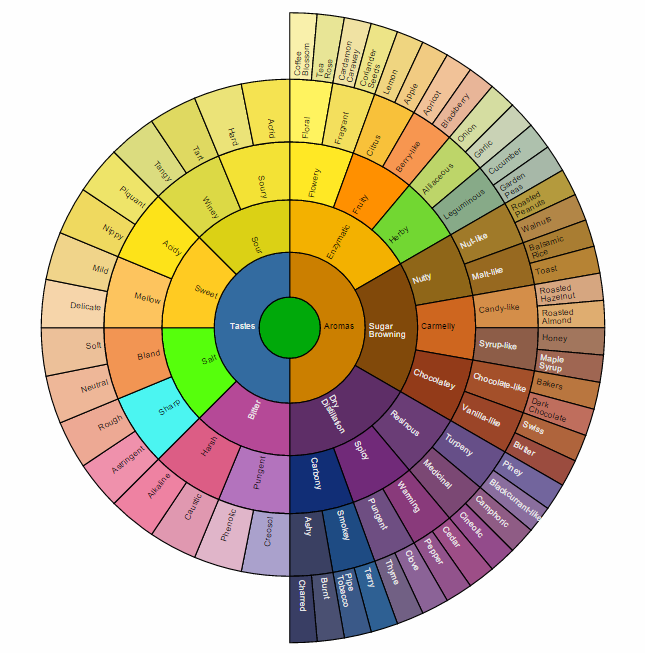 This sunburst chart is a hierarchical chart that represents the grouping and sub grouping of categories, in this case, the different flavors of coffee. When a particular section is clicked on, the wheel zooms in to make that section the parent node and also show its child nodes, whilst canceling out the parent and grandparent nodes of that selected node. To zoom out back to the original hierarchy structure, the center node should be clicked. This allows users to be able to focus on and view only particular sections of a hierarchy that they are interested in. It also helps understand the hierarchical organization better.

This chart is extensible to numerous other use cases that have anything to do with hierarchy. For example, in a business setting, the structure of an organization, its different teams, persons responsible for those teams, and many more representations. The usability of this chart extends to infinite use cases, from categories of movies, scientific research on different species and subspecies, the list goes on and on.

The actual construction and building of this sunburst chart is very similar to that of the Sequences Sunburst chart I mentioned earlier. We just need to replace the mouse hover overs with a zooming function, and also the mouseover event with a click event. And of course, we can play around with the CSS and make the chart look the way we want. I will just skim through the main points in this blog.

Now the structure of the sample dataset is very similar to that of the Sequences Sunburst. If we recall, in that one we had one dimension set for the sequence item names, and a measure set for the number of hits. Now in the original coffee wheel, the first dimension set is the same as in the Sequences Sunburst – the long string for the category names that we need to break up in our code. However, the second dimension set has alphanumeric values for colors (#123def for example). The thing with extension building is, there has to be at least one measure. So we create another column in our dataset for the measure. We call it “Value” and put random values (1, 1, 1,…) because we aren’t going to use it anyway. 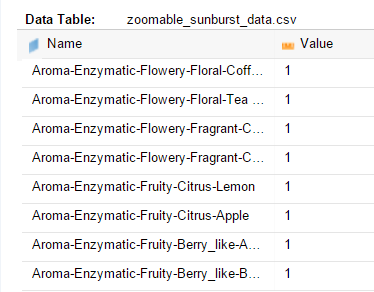 We can check this by adding a console statement:

As expected, we have our dimensions and a useless measure in tow.

And we also push in the color palette:

We replace the mouseover() function from the other sunburst chart with a click() function. This function defines what happens when sections of the sunburst are clicked on, basically zoom in and zoom out functions.

This click() function, in turn calls the arcTween() and isParentOf() functions.

We just reduce the opacity of the sections and play around with the font a bit.

As a result, we get this lovely chart in Web IDE 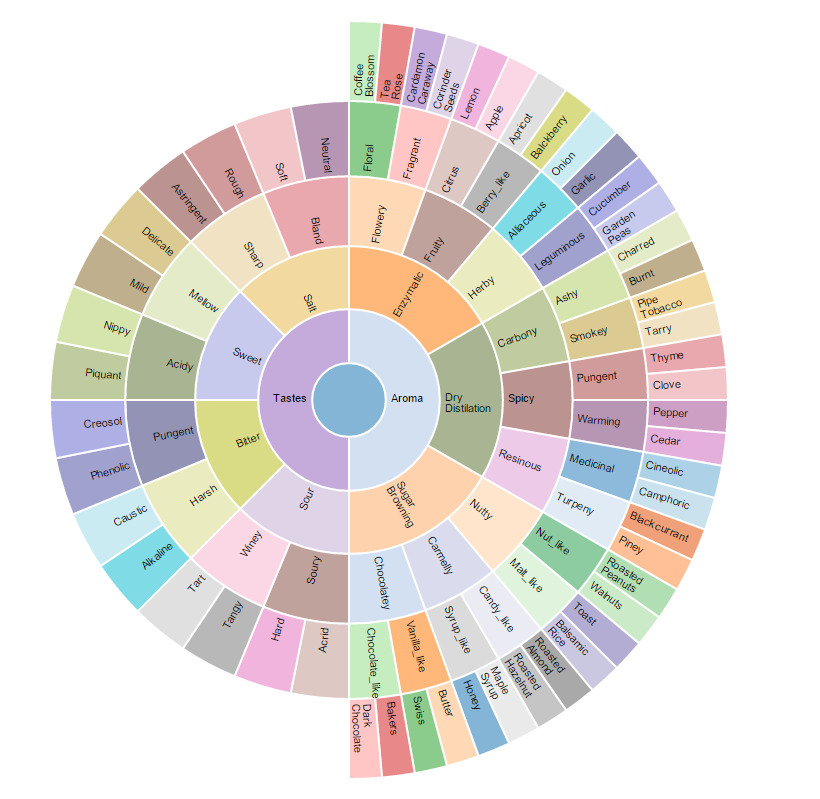 After packaging and installing the extension in Lumira, we have: 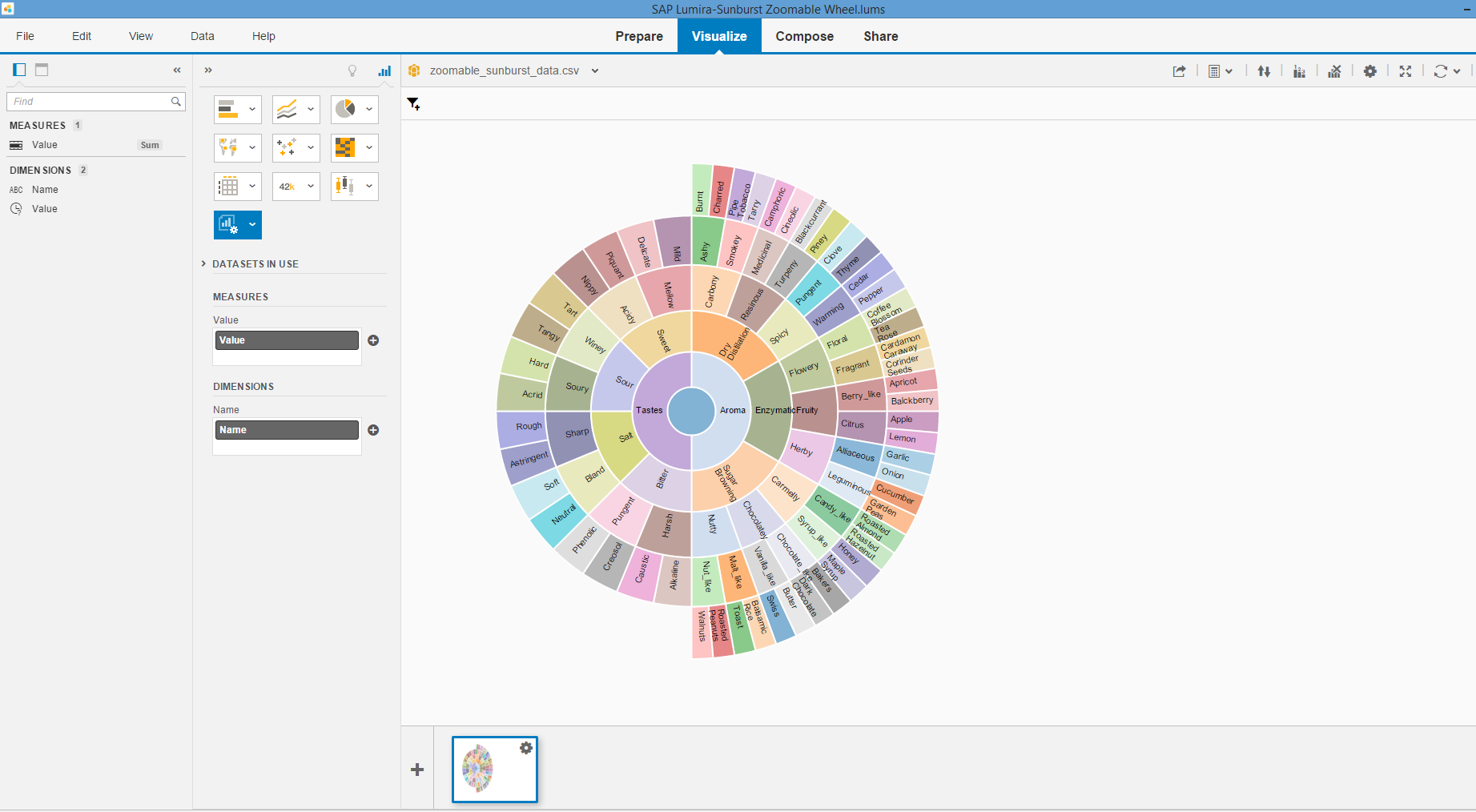 This extension is now available on SAP/lumira-extension-viz · GitHub

Feel free to reuse it with your own custom datasets and add your own fun tweaks. Good luck visualizing your hierarchy!

Interesting that the sunburst wedges in your example (and the coffee flavor wheel) are all equal in width.  I'm thinking that this is an interesting way to show a data set hierarchically but couldn't we add a measure(s) to this to drive either/and:

1) Wedge Width (Maybe your 'Value' Measure already plays this role, however when using a counter of '1', it would be equally distributed)

Just a thought on how to enhance it.

Thanks for your feedback. The wedge width is actually not tied to the measure. (Even when changing the Value measure, the width remains uniform). The width can be redefined where the path is appended. We can have different widths as well by tying them to a new width measure. This may end up in a different visual, but is a good idea for a version 2.

I've removed the color scale which was originally there because I wanted to showcase the in-built color palette. This can be changed too.

Thank for sharing it.

Your extension has been built from D3.js Library ?

Thanks for your comment. Yes this extension has been built in reference to the D3.js example, the coffee wheel: https://www.jasondavies.com/coffee-wheel/