You created several reports, such as for logistics and suppliers that contain filtering possibilities on Article. Business users that have access to information about defined set of articles use those reports to evaluate the state of business for specific suppliers. Until today, they needed to type in a list of articles when executing report to make evaluation, and this functionality was enabled by using BEx Variable with “Processing by” option “Manual Input/Default Value”. However, business processes in your company evaluated, and you received a new requirement for “dynamic article filtering” during report execution. In this case, user access rights and settings must be relevant for dynamic article filtering during report execution. This functionality must be implemented in every report that uses existing Variable.

You know you can fulfil this requirement by using “Customer Exit” instead “Manual Input/Default Value” Variable in your Query. However, when you tried to change your “Manual Input/Default Value” Variable by using BEx, you will notice that there is no possibility to change “Processing by” property. You are also in no possibility to delete respective variable as it has been used by many other similar reports.

There are two ways to handle situations like this one.

In this case, we have to consider several factors, which could be disadvantageous:

This option includes changing “Processing by” property of Variable from “Manual Input/Default Value” to “Customer Exit”. It is fast and simple way to make change and has numerous advantages:

So, as assumed and written above, in this document we explain second solution step-by-step. 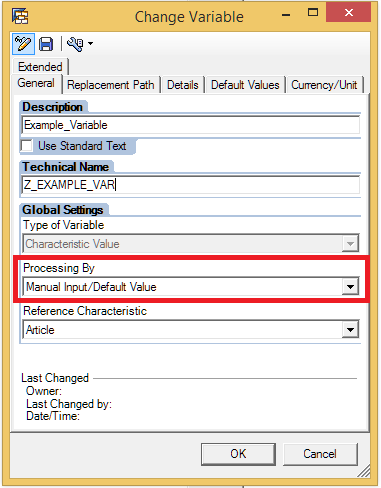 Therefore, you made numerous restrictions in queries on Article InfoObject with that Variable. 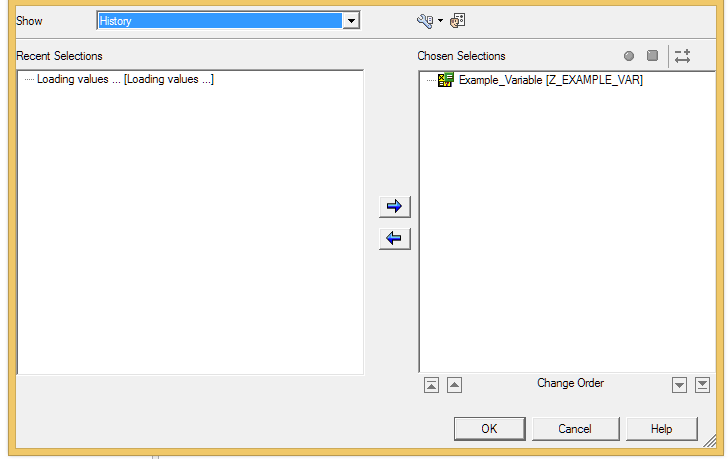 Now want to change the property “Processing by” for your existing variable from “Manual Input/Default Value” to “Customer Exit”. However, you notice, this is not possible with BEx, as by default, BEx does not allow to make such changes. 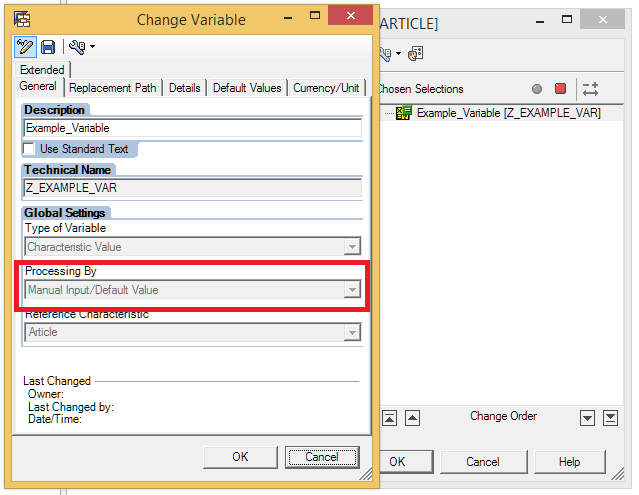 To make wanted change fast and easy, you first go to the table that holds information about existing variables in your system. First, use Transaction SE16 to go in table selection environment. 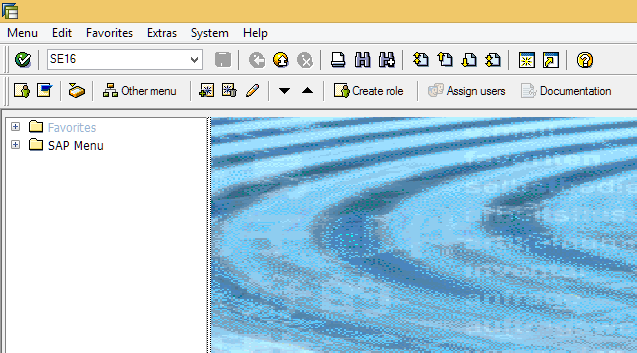 You will have a possibility to filter the content of variables information holding table. At this step, you should filter “VNAM” text field with the name of your variable. In our case, it’s “Z_EXAMPLE_VAR”. 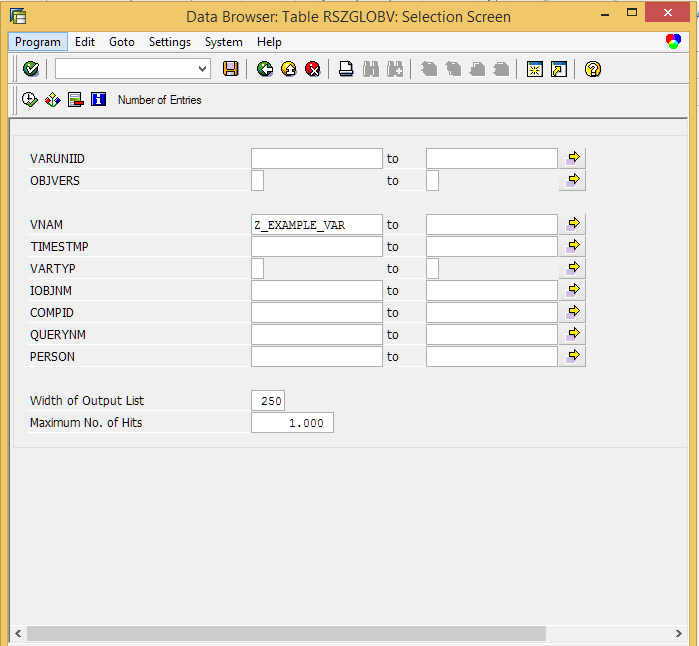 Result set returns available information about respective variable. Initially, there are two records for our variable, on has object version “A” (Active) and one with version “M” (Modified).

As we see, our variable “Z_EXAMPLE_VAR” (field “VNAM”) has value “5” in the field that represent Processing Type for variable (VPROCTP).

Detailed description of this field (VPROCTP) shows us that number 5 represents „Manual Input/Default Value“  variable processing type and that we need to make changes in this to number 3 that represents „Customer Exit“. 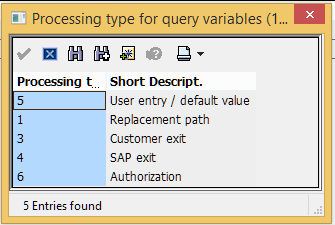 We can do that, by using possibilities of “SQL Editor” that can be accessed with DBACOCKPIT Transaction.

After we execute DBACOCKPIT Transaction, we have a possibility to select “SQL Editor” in “Diagnostics” Folder of available tools. 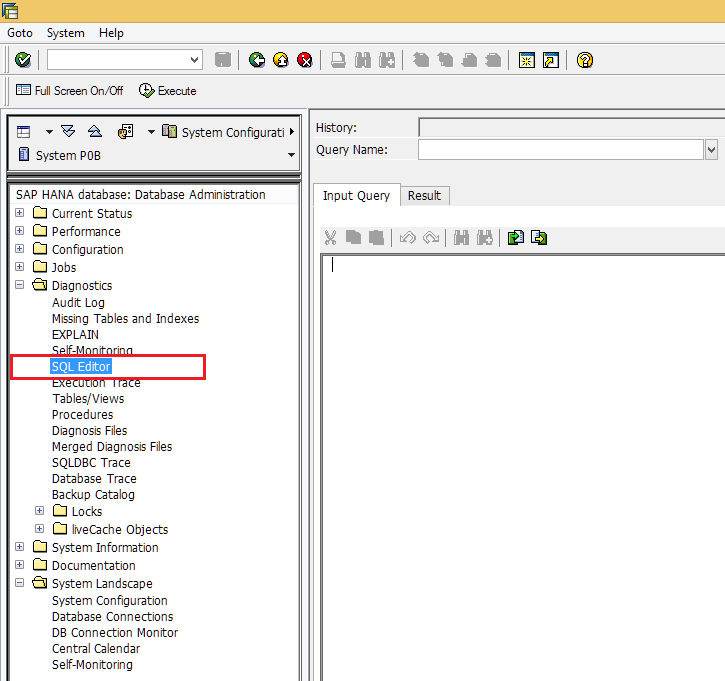 After SQL statement execution, we can check our results in RSZGLOBV table. As we see, the values for VPROCTP fields are now 3 instead of 5 for variable “Z_EXAMPLE_VAR”.

And, if we open our variable by using BEx, we will see that the “Processing by” property has changed to “Customer Exit”. Now, you can write respective code for your customer exit variable that would enable dynamic article filtering. 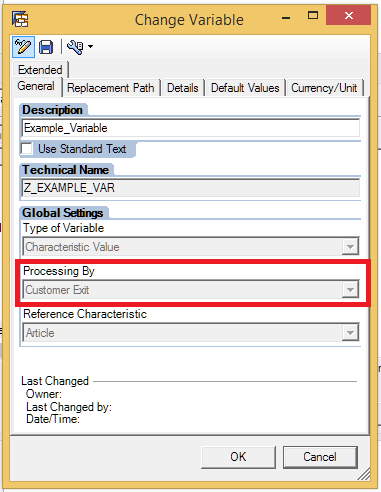