While the first two are processes of the Hana instance itself, the agent is an external process and as such can be installed anywhere. As the architecture involves quite a few components, best is to start with an example and follow its way through all the steps.

The user did execute a SQL statement like “select columnA, substring(columnB, 1, 1) from virtual_table where key = 1“. The definition of what remote tables the user wants to subscribe to follows the same path as SDA from step 1 to 5. A SQL statement is executed – create remote subscription on … – and all the validation like, does the table exist, does the adapter support the required capabilities etc are performed. 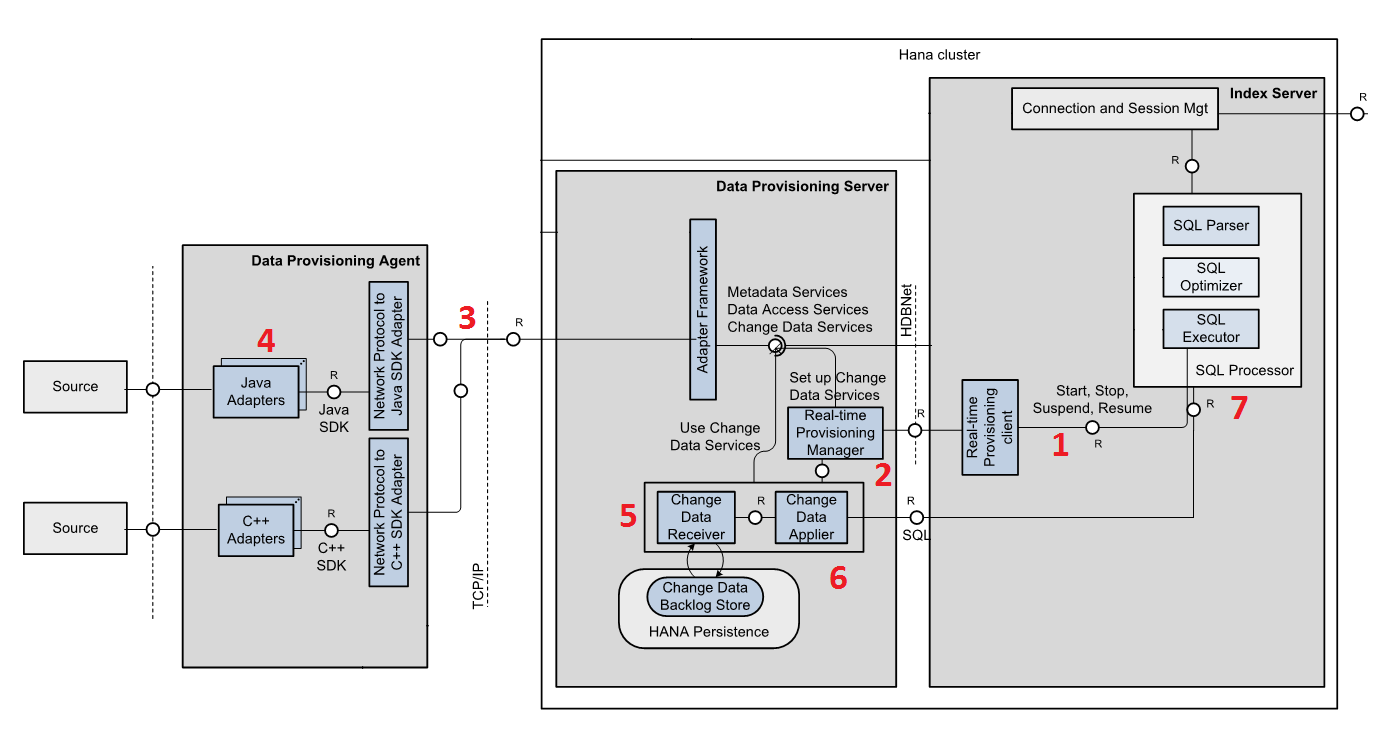 One important aspect of the architecture is that all, really all, information is stored in Hana itself and nothing in the adapter. The reason is simple, there might be multiple agents for the same source system for failover, the adapter/agent might stop working and upon restart needs to know where to pickup the work, the adapter can be reinstalled.

All this data is stored in Hana tables and can be quite interesting to debug a problem. Usually these tables are not queried directly but rather a public synonym pointing to a view, which has the row level security implemented inside, is used. Here is a list of such objects

Using above metadata tables all monitoring can be done using pure SQL commands. But there is a Hana Cockpit based set of screens as well in a separate distribution unit found on Service Marketplace. Very handy to install these instead plus it shows the status of the Task framework as well, the calculation engine based data transformation framework part of the SDI solution.

In order to help setting up the agent and the adapters, the Agent Configuration Tool part of any Agent installation can be used. It does execute the SQL commands for adding agents, adapters, etc and edits the local configuration files.

Above the only adapters explained where the SDI adapters. If the ODBC based adapters of the Index Server are used, then no Data Provisioning Server, Agent etc is required. Instead the Federation Framework does access these ODBC adapters via the SAPDB Adapters component. Although more and more adapters will be moved to the SDI, this path will continue to exist but for SAP owned databases only. Sybase ASE and IQ for example. All those databases where going though multiple hops and an SDK does introduce limitations of some kind.

Speaking of multiple hops and SDK, one question might be why the Agent is required even if the source is local. For this case there is a C++ version of the SDK available as well and such an adapter can be accessed by the Data Provisioning Server directly. The only adapter implemented currently is the OData adapter. And as this SDK is the regular Adapter SDK, such an adapter could be deployed on the Agent as well. Then a local source would be accessed directly via the DP server, a remote source via the agent.

The normally used Adapter SDK is the Java version however and as Hana is written in C++ it cannot run the Java code directly, there has to be some inter-process communication which the Agent handles. Hence for a scenario, where the source is local, installing the Agent on the Hana box could be an option but the is needed still.

2.In a HANA to HANA SDI real time replication , the source tables could support no primary key.

Thanks for sharing this information .

I have one question - our REMOTE_SUBSCRIPTION_EXCEPTIONS_ has grown and has around 400 K entries , how we can purge these records ? Since its in SYS schema we can not truncate using any other db user.

If the remote subscription exception records is always growing ,it must encounter some big issue.It has two work-around to solve the issue.

1.From the error,check the issue description and solve the issue until there are not exception increasing.Then we could write a store procedure to re-try / ignore all the exceptions automatically.

2.If the exceptions are too large to truncate.You also could try to drop the recreate the environment.

for a customer we evaluate the usage of SDI. I have  a question about 2 features that we want to implement in SDI / HANA:

With SDI we want to read data from multiple heterogeneous data sources.

2. After reading the data we want to store them in a staging area in Hana (some customer specific tables) in order to perform business validations on these data. Is there a Hana technique that we can use to implement the business validations? Is there a features that allows us to trigger the validations in an ABAP Application Server, or alternatively in Hana XSA?

thanks a lot for your blog.

I would like to know if a SD Agent configuration in High Availability is possible and how.

The source system is an ECC with 3 AS and 2 of them serve in cluster the ASCS.

What an awesome research and explanation about the SDI and SDA!

However, I still cannot understand one thing - in order to replicate data in real time - you need to to the DB, and run this massive SQL query, and you basically just replicate all the database, instead of only 1 table. Am I right? Or there is a mistake?

And also, we want to do the SDI central server and I havent found any advice on the system parameters for it - CPU, Memory and such. Can you please advice?

What massive SQL statement do you mean precisely?

The LogReader Adapters all work the same. First you enable the adapter to read the database changes. Now the adapter can see all that changed in the database without adding overhead to the database as it does write the transaction logs anyhow.

And then the adapter will read the changes about the requested tables. So in your case the one table only.

Keep in mind that the dpagent and its adapter just acts as a bridge. It does not do any heavy lifting but streaming the data from the source database to Hana. Hence very lightweight.

Hope you are doing good !

I have been using SDI extensively, but was curious to know if there is a security layer which can be implemented. At this point, the sql privileges of Create Virtual table / Delete, Add remote subscription etc are provisioned on the remote source and that repo role is granted to the developers. But is there an automated way of handling this, rather than having to assign the roles manually to the developers?

Looking forward for your response. Thanks,