Standalone testing of developed Java mapping programs for SAP PI/PO is one of effectively utilized techniques aiming simplification and reduction of efforts required for a mapping program testing. Commonly used approach which has already been described and demonstrated on practical examples earlier, can be summarized in following steps:

This approach is described in details with corresponding code snippets, for example, in a blog Coding Java Mapping !!!! – Points to ponder written by Praveen Gujjeti.

Having this in place, following benefits can be achieved:

This project contains a program that shall be executed to perform a mapping program test.

In provided implementation, all three input parameters are defined as program arguments and are mandatory.

Using Reflection API, it is possible to achieve required level of implementation abstraction and unification, and to create a program that can be used in a generic way for calling any mapping program that is compliant to the described approach. In sake of making it even more flexible, some important parameters were factored out as constants, which can be either adopted or replaced with extra program arguments, if often changes to their values are expected for various tested mapping programs.

Below is a code snippet of the described console program for calling a mapping program test in a standalone mode:

In this example, I use NetWeaver Developer Studio for development of both mapping program and mapping test caller program, so project setup and screenshots are Eclipse specific. If another IDE is used, referred project configuration shall be found in other locations. 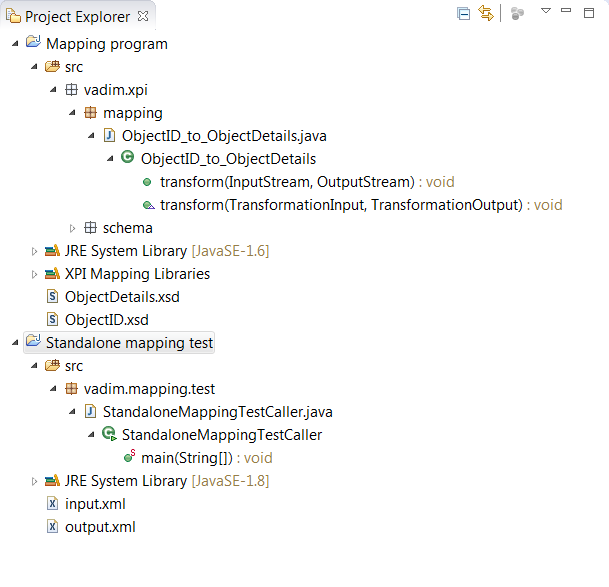 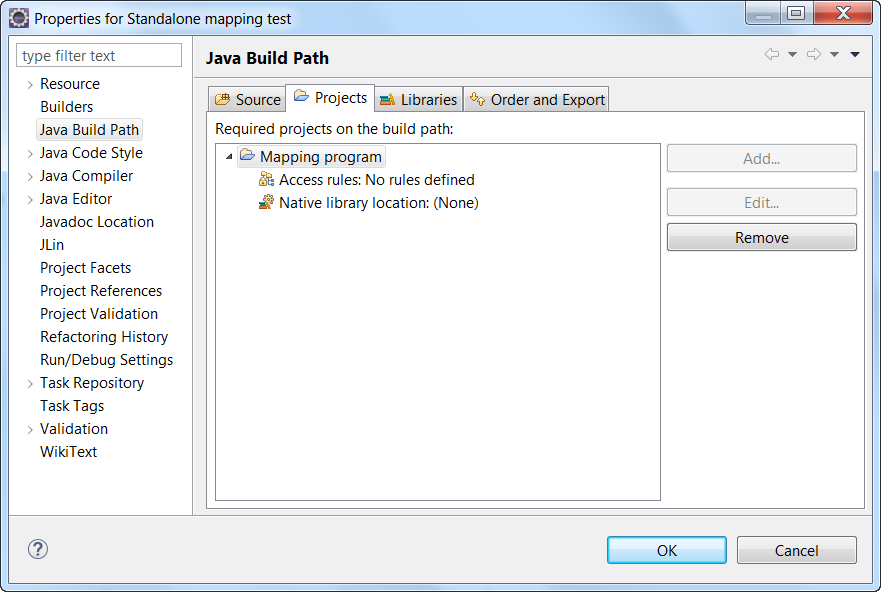 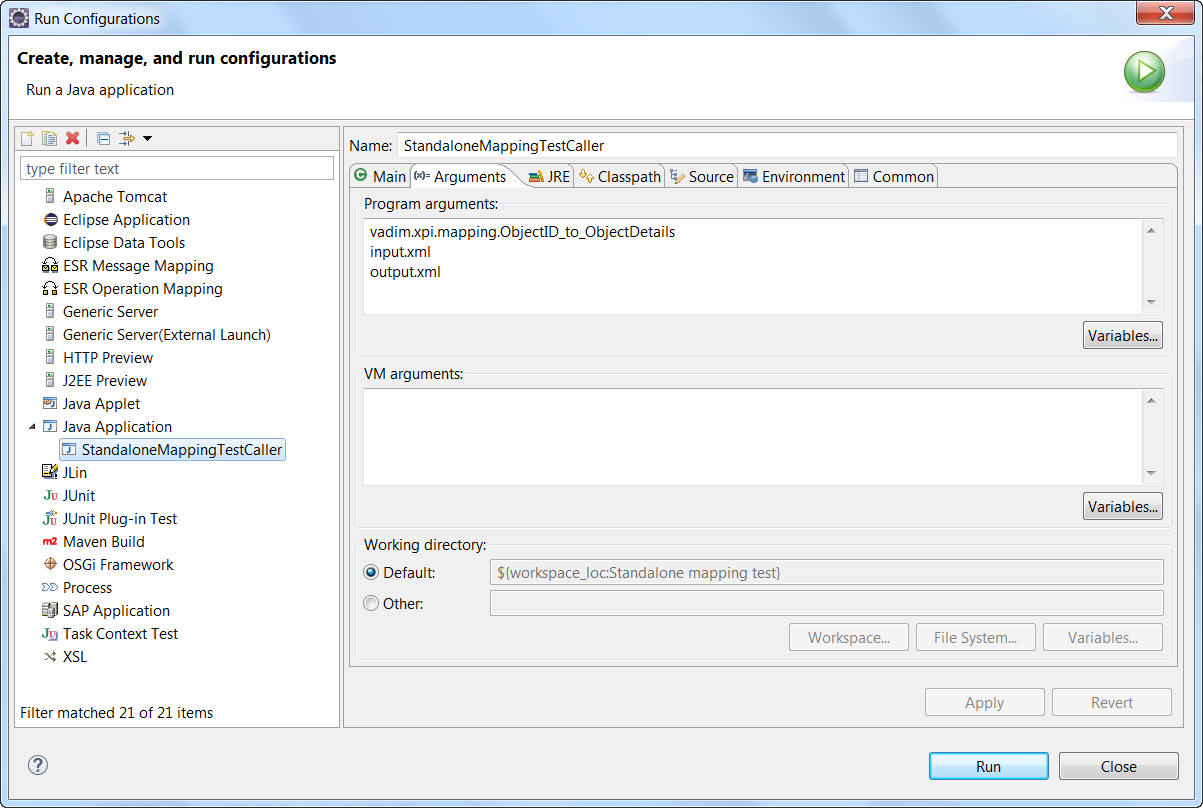 (in this example, both source message and target message files were created in workspace of a mapping test caller program right in IDE – for sure, this can be changed and files may be located in arbitrary local or network location that is accessible to a program)

After these preparatory steps are completed and source message content is placed in a file, we are ready to execute the program and verify results. 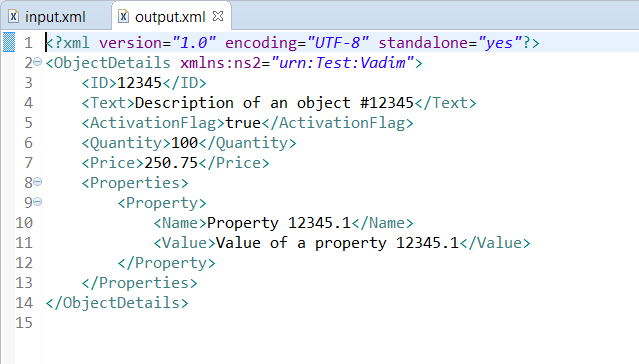 In this blog, I used a very basic and minimalistic mapping test caller implementation – primarily, because this provides opportunity of testing a developed mapping program right from IDE, and doesn’t require running any other application or leaving IDE to execute a mapping test. Another reason is, it is not dependent on any other (external) infrastructure component that needs to be involved in a test run, besides those already provided by IDE.

For those who are keen on running such tests not from IDE / console, but from friendly and more nice looking user interface, described approach can be enhanced and implemented utilizing more advanced functionality for accessing a source message and handling, rendering and visualizing a target message produced by a tested mapping program, and embedded into a more complex application – for example, a web based application or a standalone executable application that dynamically loads necessary classes of a tested mapping program.

I totally agree with you on the decoupling idea and keeping the actual mapping program "clean". I strive to keep the mappings I develop free from superfluous logic too.

I use a different decoupling approach where the standalone testing program calls the transform() method of AbstractTransformation directly. This way, the mapping program does not need the transform/execute/call method (which is also unreachable in runtime) that converts the streams to the TransformationInput and TransformationOutput objects. The stream conversion logic is within the testing program. However, this approach requires implementation classes of 4 interfaces which are not available in the built-in NWDS libraries, so I created dummy local implementation classes for them as shown below.

I really like your approach though, especially the use of reflection API for dynamic execution. Using run configurations to pass in the parameters is also a nice touch. I often get lazy and just modify the name of the Java mapping class to be called directly in the testing program, which is not a good practice!

Thank you for feedback and thanks a lot for valuable comment regarding an alternative approach. Having all non-mapping specific logic outside of the mapping program and placing streams conversion into a standalone mapping test program is definitely something worth looking into and making use of.

Yes, your understanding is correct.

It is actually a modification of the logic provided in the Wiki below. I just decouple the main() method and helper classes into a separate testing program class.

In this article we can see how to test a Message Mapping in Eclipse.

Would you have any info/guidance on using the resulting XML with a tool like XMLUnit to automate (ala. CI/Jenkins) the unit tests?

I had prior experience using XMLUnit to compare XML documents programmatically, but it wasn't something that was called from Jenkins. Given XMLUnit validations can be represented and handled as assertions, they can be included in test cases that are developed by means of more general purpose unit testing frameworks (JUnit, Spock, or any other equivalent you tend to use in your project). With this in mind, it shall be possible to make use of test cases that also include XML documents comparison, with help of such plugins of Jenkins as JUnit plugin (in case you use JUnit or JUnit-compatible frameworks for unit tests) or xUnit plugin.

I am still looking for a method to access the Message Mapping beans (PO 7.5 single stack) from Eclipse - these reside on the server, but my unit tests run on the desktop...

Similarly, if we could access the Receiver Determination, we could run unit tests on these also.

If anyone is doing this, could you please share? Any help would be appreciated.