However I had the feeling from reading posts here that PB 12.6 was a bit buggier than usual. So I’m wondering

a) If this was true?

b) Is everything okay now with the latest EBF?

Of course I know there will always be bugs, after I write a lot myself every day 🙂 But, it would be nice to hear some opinions on the state of PB 12.6. I only care about PB Classic at the moment.

We have avoided using 12.6 because of the comments that have flown around this forum. We perceived the risk as being to great.

However, having said that Armeen asked me for a list of known bugs and when I started looking, apart for one I had raised and a few other there was little evidence to support the view that it was buggy. I think the fact that SAP changed things and did not document the fact was a little worrying. Finding out in the field is not my idea of good software support.

From what I know of your application I would be pretty certain that 12.6 will throw up some problems for you. Your QA people will have to be quite thorough in their testing. But you will have to bite the bullet at some point I guess.

I can not even migrate my frameworks or example applications from PB 12.1 or 12.5.1 without getting migration errors. For example,here is a snapshot from today's migration attempt .... 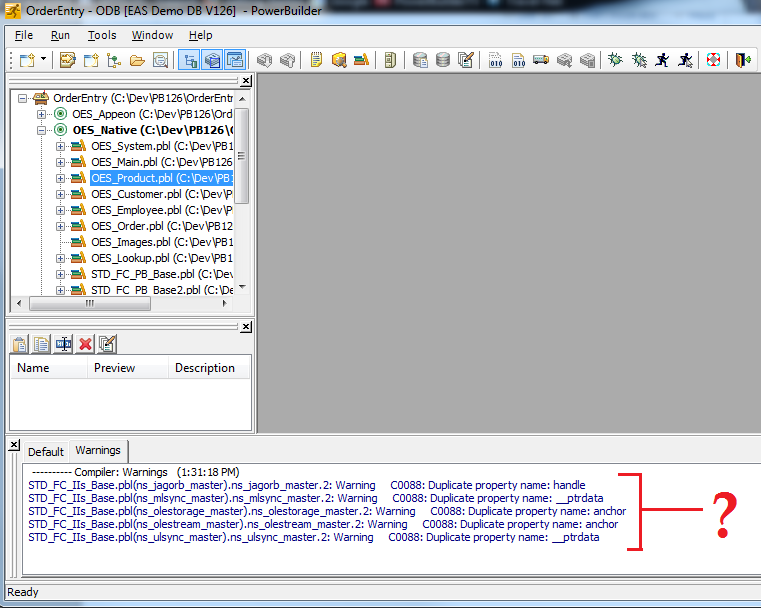 So what I have to do now is edit my UO's and remove this incorrect object class references - which is a PIA.

Also, when using the new Docking commands to make dock-able Windows - this adds to any applications stability. This is easy to see .. just run the Dock Window Example and after a minute or two of Opening/Closing/Re-docking/etc the example application always crashes!

FYI: If you use the SCN "Search" feature and look for "PowerBuilder 12.6" and then filter on crash, performance, slow, migration, etc keywords  - you'll find that many people have had issues with v12.6 in various degrees & places.

FWIW: I think that many people have tried PB 12.6 but have been thwarted with issues right from their quick testing - leaving a bad taste. Even applying EBF's seems to have reintroduced issues in some cases. In days gone past, Sybase & especially PowerSoft would soon issue proper Maintenance Release (Service Pack). The MR/SP would be a fully System Tested release and sometimes even going through a Public Beta. In the case of PB 12.6 .- even the GA version never had a Public Beta. With PB being some complex in its features, unless SAP does this full regression system testing on an official SP and makes it public, there is no real way to know if v12.6 is really that stable all around.

When you add to the mix that many PB Shops do not have a support contract (thus obtaining EBF's are blocked) and lots of independent consultants are barred from EBF's - and even from PB 12.6's initial Beta - the amount of PB Community confidence in v12.6.0 has to be extremely low. Due to these factors, I can see many PB Shops like yours keeping their distance on v12.6 until we have lots of reports of a stable release that has made it into production. Especially for large Mission Critical applications.

AND, don't even get me started on the Winform & SmartClient features.

Thanks Chris as David alluded, our application is large, complex and uses a lot of the features of PB. So staying away from PB 12.6 sounds like a sensible decision. I guess Appeon will have to make sure their first release is as stable as they can get it, or people like me will be scared to update.

Yes, my Government client applications tend to be very complex, have 1000's of Windows, and 10,000's of objects with 1.5 - 2.5 million lines of code on average. They also typically use most of the main features of PB, utilize MS-Windows SDK calls, have 3rd party products assisting them, are very DBMS intensive (1-2 Million DBMS calls per hour) and have 1000's of concurrent users during peak times of the day (ie: the current systems I am working on at Passport have 3-4K concurrent users and at ESDC, 8K concurrent).

These applications are a great testimony to PB's prowess and longevity thus far as these applications were built in the 1995-2005 time frame (typically). The fact that they are still running flawlessly here in 2016 is "awesome" IMHO.   😉

You are 100% "on the money" - we need to help Appeon make sure that their 1st release of PB comes out with the stability & quality that the PB Community had grown to expect from its former PowerSoft & Sybase stewardship. 😘

On powerbuilder classic IDE, usual problem i see the on Database Painter where the database password simply go off and need to restart the IDE again by giving password.

5) What DB Client do you connect with?

6) Do you use Stored Procedures?

5) What DB Client do you connect with? Oracle Native driver

6) Do you use Stored Procedures?  Yes

7) Do you use "in-line" SQL? Mostly the SQL are return in PL/SQL and Not very frequently inline SQL in application, but yes we use some place

8) Do you use SDK calls (Windows API's)?  Yes ( When we migration need to verify all the api are support by O/S

Hope it helps you..

When a Retrieve is in progress in v12.6, the Stop/Cancel icon does not appear - however, pressing the Retrieve icon again does result in the DB Painter cancelling the Select in progress & informing you properly of the cancelled action.

The problem now in v12.6 is the omitance of changing the Retrieve icon to a Cancel when a Select is running. This used to be the standard behaviour in PB. A novice PB User or worse yet trial PB User now has no idea that they can cancel a running Select. Hitting the Retrieve icon again to cancel is now totally non-intuative inv12.6!

Being an independent consultant, I have no mechanism go log this issue. However, it should only take Appeon and/or SAP a few minutes to reproduce & verify with another PB version like 11.5. 😉

Yes, I've waited a while before answering on this one, I wanted to check out the latest  patches 4088.

(No luck: I still see pb 12.6 putting "weird characters" in my dw after

(strangely enough, it seems to help to first assign the data buffer to an "any" variable,

but not a guarantee, reported to SAP, but they first seem to need a working sample

app to reproduce it - since they can't - before considering it seriously. Someone else

had similar problems long time ago

This is only one of 3 or 4 bugs, I think to have found in a timespan of 10 days. I've come to the point of thinking of not reporting them any longer, it simply costs me too much time, I need quick solutions and we might go back to 12.5.

Don't throw your money on 12.6, is all I can say, especially now that Appeon has plans to do something with PB.

Can you open up a support case with SAP?  If you do not have a support subscription please report your issue here: http://www.appeon.com/pbbugs

Thank you, but ... I already opened a case about this with SAP weeks ago, but after them giving it themselves a high priority, finally, it took them 2 weeks to only even ask me how to reproduce it. This is the case:

I explained it (again) and after me asking them if they had even tried to reproduce it until then, some time after, their reaction was, "they cannot reproduce it". Then I was asked to give them a "sample app" to reproduce the problem, after telling them it still was happening, even after installing the latest patches. Initially I wasn't going to do so, but since I'm loosing a lot of time trying to reproduce, installing patches, uninstalling them again, etc. and the effort on the "other side" seemed less, I decided not to be in a hurry with it.

But look ... how coincidental, when I saw your response now, I had just finished a small application that does show the problem, without having to do a lot of effort.

So I am about to attach the case to the incident I made weeks ago. (with my colleagues login K.F., who is registered on the maintenance contract).

Now that I've done SAP's job, let's see how much it will take to get them to really try to reproduce the problem. Meanwhile, luckily, my workaround (using an any var in between assignment from primary.original buffer to primary.current buffer) seems to work, scares the sh** out of me though..., since our release went live at the end of last year and I don't know how serious this bug could be.

I will post the sample also on the the regression bugs page of Appeon as you suggested, but ... first of all, I'm not sure if it's a regression bug, I'll test it also on pb 12.0, and the only problem, is that it includes client's data so I can't have the fixed data in the datawindow, someone would have to test it, inputting or retrieving his own data.

(by the way thanks for your effort on getting me on Appeon's support for the Crystal reports, but after a promising start and telling them where the sample app that they sent me, goes wrong, the next reaction was, "Please report my problem (again?) to Novalys", something I'm obviously not going to do 🙂 . I also don't understand how a sales company would help out better than the technical people at Appeon itself.

Just take my and other people's word for it: 12.6 really does not feel as a good foundation for the future release, but only SAP can tell how much of that is really true, since they could check where a bug is coming from. It might be easy to fix, or they might still not know what causes it. It feels like "memory is being overwritten somewhere, then there's things such as ConnectToNewObject() that works (or not) whether Outlook is open, while that same behaviour is different when running the same code using an PBD executable.

I think it's simply scary, let's just hope your people get an affordable release out soon 🙂

I would not be surprised if it also fails in pb 11.x

I've reported also and uploaded my sample app to Appeons Regression bugs, though might not be recent "regression".

FYI: I got a reply from SAP on the databuffers problem:

They basically say that this has been happening since pb 6.x.

You simply cannot assign the buffers "original" on top of "current" when:

2) and operating on the same buffer (like primary, in my case)

3) and there are variable length data such as strings involved

In that case you have to do an intermediate step, assigning the data from one buffer first to a variable of type any and afterwards assigning that variable to the other buffer.

To complement your answer, a new KBA has been created:

Thanks, but ... I'm getting a "Document is not released" when trying to view after login.

It doesn't help those without a support contract or independent consults, etc that cannot access these either. No uniform help to the PB Community.   🙁

Well ... yes you're right, but in SAP's defense (just a little bit): on my ticket I've been told that SAP will adapt the documentation about the use of dw buffers, I only hope that will include the help file of "all versions since pb 6.x"

Hello,
I forgot to release it. It should work now

So .. regarding what Chris said: how will the users find this information? Will it be in the pb help files?

Chris is right. KBAs are currently only visible to customers who have a valid support contract