As IFRS (International Financial Reporting Standards) are evolving fast, we continue our focus on the latest IASB’s (International Accounting Standards Board) updates. Since our last blog published in July 2015, the following publications have been issued by the IASB:

The Revenue standard (IFRS 15) was issued jointly by the IASB and the US Financial Accounting Standards Board (FASB) in may 2014 with an effective date of 1 January 2017. Both Boards have now confirmed a one-year deferral of the effective date.

The main reason for the amendment is that the IASB is currently consulting on some proposed clarifications to the standard (exposure-draft published on July, 30th). These proposals follow discussions with the Revenue Transition Resource Group (TRG), established by the IASB and the FASB to support companies in the implementation of the new standard.

Postponement of accounting changes for associates and joint ventures

In September 2014, the IASB issued amendments to IFRS 10 and IAS 28 relating to transactions between an investor and its associate or joint venture (see our blogIFRS Update – 2014 H2 Publications). Subsequently, the IFRS Interpretations Committee and the Board considered a number of other issues with respect to the same topic.

The other publications issued in H2-2015 are only proposals that do not call for comments at that stage. 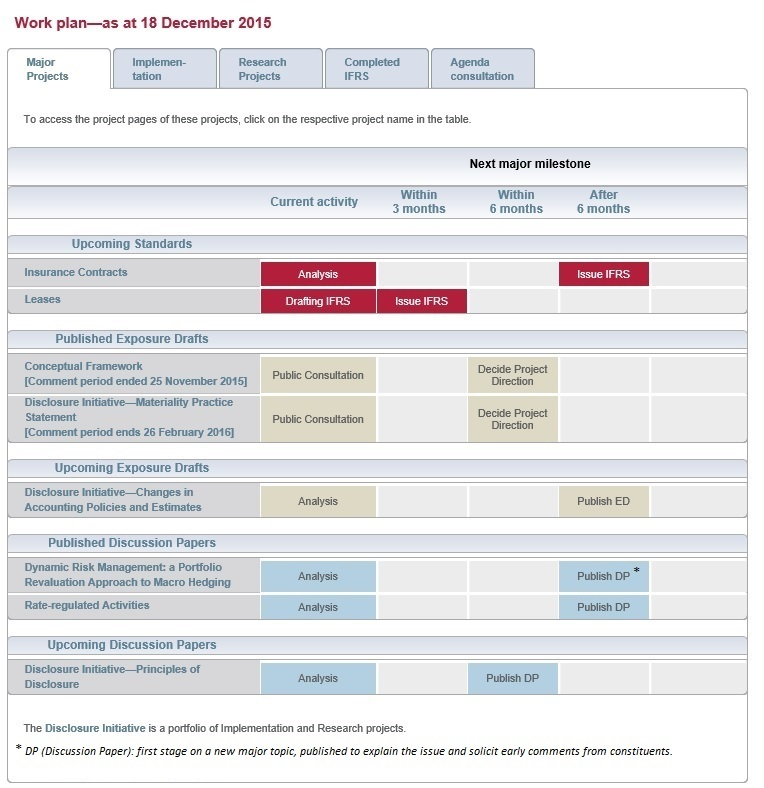 The two remaining long-awaited major projects relate to insurance contracts and leases. Regarding the insurance project, the final standard should be delivered during 2016. IFRS 16 Leases was eventually issued on 13 January, 2016.

Based on the latest work plan, the following texts are expected for 2016:

We will get back to these projects in our next blogs. Stay tuned !