This  blog is about Integration Gateway (IGW) in SAP Mobile Platform 3.0 (SMP).

The Integration Gateway component allows to expose backend data as an OData service.

There’s support for some concrete data sources like JDBC, JPA, REST service, and for extending the capabilities it is possible to write custom code.

This custom code is placed in a script file which can easily become very long.

Another point is that often such manual coding is repeated in several scripts.

For Example, in the REST data source, the tasks to convert the payload is very similar in the QUERY and in the READ operations, and is repeated in the response of CREATE, etc

It would be nice to reuse the code instead of duplicating it.

However, it is not possible to modularize the code to split the script file into several files or to add several Java classes to the OData implementation project that we create in the API toolkit for SAP Mobile Platform in Eclipse.

You don’t need to try.

But don’t you feel the wish – like me – to clean up the code, modularize it, use Java for more complex tasks?

And also the wish to – wow – debug the code with normal Java debugger?

So please go ahead and read how I solved it:

– Move all the code into a separate OSGi bundle.

– Deploy that bundle to SMP server

– Reference this bundle from my OData implementation project.

– Debug the bundle as a “Remote Java Application”

In the present tutorial, I’m going to describe it in detail.

As usual, we’ll keep our example as simple as possible.

The source code can be found attached to this blog post.

Note: this tutorial doesn’t represent the official documentation. It is just my personal way of working.

In the first part, we’ll cover the OSGi bundle

In the second part, we’ll write the OData service

In the third part, we’ll debug the running Java code

Finally, in the fourth part, we’ll use junit to test our API before publishing it

6.2. Connect from Eclipse to SMP

6.3. Debug the Java code in Eclipse

Usually, the SMP server is installed and started as Windows service.

During development, I prefer to start it from the command shell.

How to start the SMP server from console?

Navigate to the location where you’ve installed the SMP

Step into the \Server directory

Then wait until you see the ready-message

Here you can see that as per default, our bundle would compile against the currently running Eclipse instance.

What we now are going to do is to add the SMP server to this list and define it as the target against which we compile.

Select “Nothing” and press “Next”.

Enter an arbitrary name for this target e.g. “SMP_local”

“Browse” to the location of the locally installed SMP e.g. C:\SMP \server

Note: The chosen path has to point to exactly that folder that is the parent folder of the “configuration” directory.

Back in the preference page, now you have to enable this newly created Target Platform to be the active one.

From now on, all bundle-projects in your Eclipse workspace will compile against the bundles that can be found in the SMP.

What we want to achieve in this tutorial is to create an OData service that runs in SMP and that exposes data that is provided and managed by a separate OSGi bundle.

We’re going to create this separate bundle in the current chapter.

This bundle will represent the data model (note: this is not the OData model) and it will offer a simple API that can be called by other bundles in order to obtain the data.

As such, it will act as “Data Provider”.

It will also host all logic to manipulate the data and it will host helper methods that will be called from the OData service that we’ll create later.

This Data-Provider-Bundle will be manually deployed to SMP

Press Next and enter the details of the project:

Select as Target Platform “an OSGi framework” and value “Equinox”

With this setting we specify that our bundle is not intended to run in Eclipse (which is based on OSGi as well), but in a different OSGi-environment.

Equinox is an implementation of the OSGi specification.

Since we aren’t using any special OSGi features, it actually doesn’t make much difference for us. 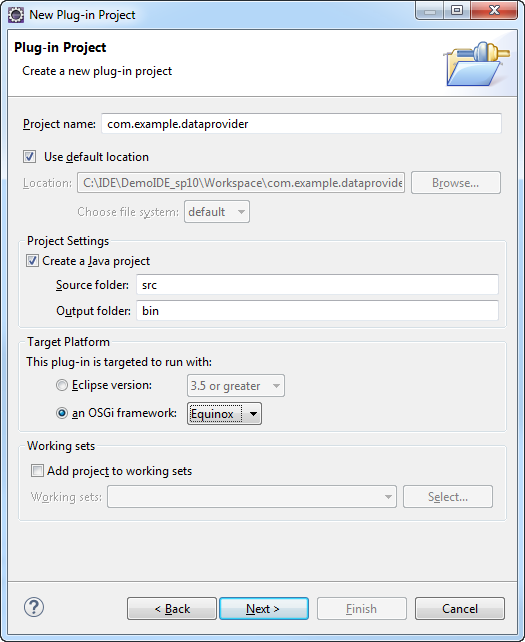 Press Next and enter the details of the bundle

Please make sure that you stick to this naming, because it will be used for the java packages as well and the package will be used by the OData service project. 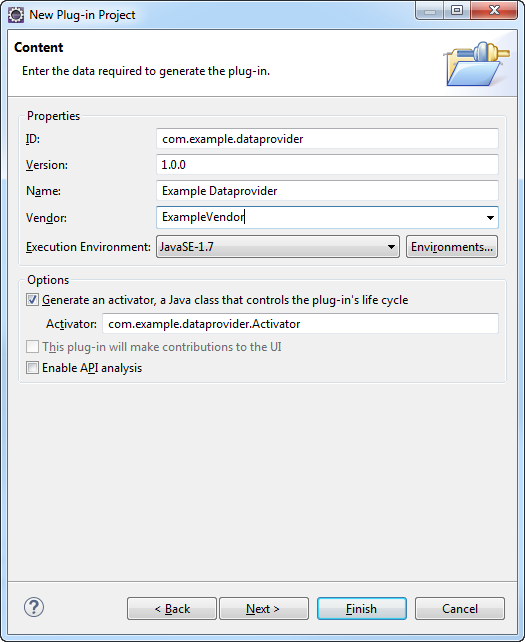 Press next and deselect the template creation

In the subsequent popup, choose “No” to not change to Plug-In Development perspective

Result: The project is created and the editor of the MANIFEST.MF file is opened.

Before starting with the code, we need to declare the dependencies, otherwise our code won’t compile.

In our code, we will be using API that is provided by Olingo, the OData library. This library is available as a bundle in the SMP server, so we can use it in our Data-Provider-Bundle.

If not already open, open the manifest file via double-click on <project>/META-INF/MANIFEST.MF

Open the “Dependencies” tab on the bottom of the editor.

On the left pane, we can declare the bundles that we need.

Repeat the steps for adding com.sap.gw.rt.camel.components.custom-development

As usual, save the editor. The description above declares a dependency to a bundle. Dependencies can as well be declared in a more fine-granular way with the concept of Import Package, where you explicitly declare which package you need.

After adding the required dependencies of our bundle to other bundles, we have to declare that our bundle can be used by others.

Remember: we’re creating the bundle because we want to use it from our OData service that we’ll be creating later.

In order to expose our API, the corresponding concept is to “export packages”

We switch to the “Runtime” tab in the bottom of the editor, press “Add” and choose the one and only package that our bundle contains.

Don’t forget to save the editor. 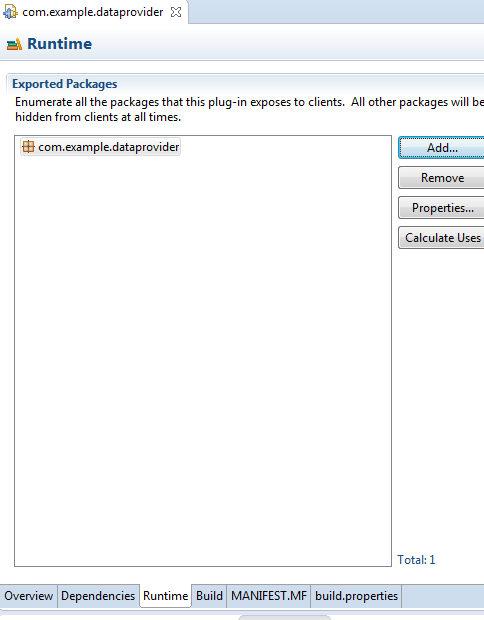 Finally, we can start writing some code

-> This code: We want to have sample data

-> That code: We want to offer it via an API

For the sake of simplicity, we don’t create new packages. If you do so, remember that you have to export it as well. 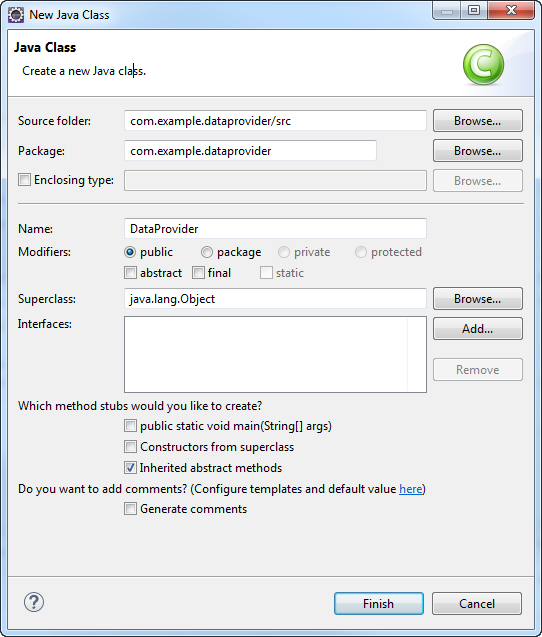 What we want to achieve in this class is to

– offer a public method that provides all products

In our example the DataProvider class does not only provide the data, but as well handles the Message object.

The sample code looks as follows:

I guess that you’ll feel like me, that it would be nice to test the bundle, after it is finalized and deployed to SMP.

Such that we can be sure that our OData service will be able to safely make use of our DataProvider bundle.

In order to test our bundle, we could write a second bundle. But it is easier to proceed as described below.

After deploying our bundle to SMP, the OSGi runtime will immediately activate the bundle.

When a bundle gets activated, the “start” method of the Activator class of the bundle gets invoked.

When we created our bundle-project above, we specified that we want an Activator class to be generated (see the screenshot above).

Now we can make use of it.

We’ll add some dummy code to the “start” method, in order to call our DataProvider and write the result to the console.

After deployment, we can check the console if the expected output is there.

We can even change to the OSGi console and there we can manually stop the bundle, then start it again and each time we start it, we’ll see the same output (see section below)

Now that we’re done with the coding, we’re ready to deploy our bundle to SMP server.

In the present tutorial, we’re doing it manually.

Two steps have to be done:

1. Generate a bundle out of the current bundle-project

2. The final bundle jarfile has to be deployed to SMP

In order to build the project and generate a bundle, we’re using the export mechanism (advanced users use a build tool like maven)

To export the project, we have to

right-click on the project node in Eclipse,

After pressing “Next”, we have to make sure that our project is selected, then enter the target directory, where our bundle will be generated at. 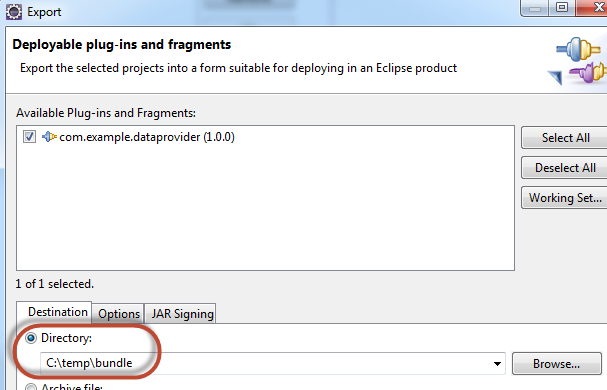 After pressing “Finish”, a “plugins” folder containing a jar file is generated at the specified location.

There are several possible ways of deployment, we’re using the easiest one: copy the bundle to the pickup folder.

The SMP server supports hot deployment, which means that the OSGi runtime will notice that you’ve copied a bundle into the pickup folder and it will include it in its OSGi runtime on the fly.

The pickup folder is located at

This way of installing (hot deployment) is used rather for testing purpose. For productive environment, use the command line to really “install” the bundle into the OSGi container.

For more information about OSGi and installation procedure, you may have a look at my OSGi Blogs:

Now that the bundle has been deployed, let’s quickly verify if everything’s ok.

Open the folder \pickup\.state and check if the deployment has been successful.

A file is created which contains some information about successful or erroneous deployment.

In case of error, you should check the console (if you’ve started your SMP server via command prompt) and also check the SMP error log and the OSGi log

Next, have a look at the OSGi console to check the state of the deployed bundle.

For this purpose, we open a command shell.

Then we connect to OSGi via the command

After pressing enter, it will connect…

Then the OSGi-console is ready and waiting for our commands:

We can type  the command

The command lb stands for “list bundle” and lists all bundles with the given name that are known to the OSGi runtime.

The result of the command shows also the ID under which that the OSGi runtime has registered our bundle.

We can now use this ID to display the details of our bundle.

In our example, the command is the following 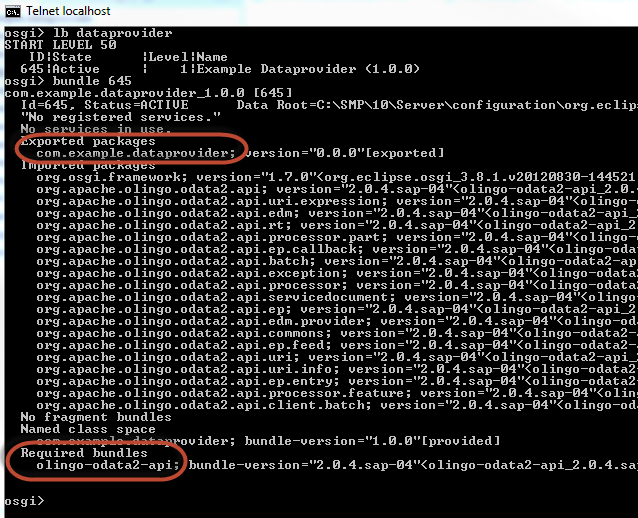 A bundle can be embedded into the OSGi environment without being activated (in such case, its status is “Resolved”)

When the OSGi framework activates a bundle, the “Activator” class of this bundle is called and its “start” method gets invoked.

In our bundle, we have added some log output to the “start” method, such that we can now go ahead and check if our “product” data has properly been created and displayed.

We can now change to the OSGi console and execute the commands as shown in below screenshot.

We have created a bundle.

We have added code to create and manage some sample data.

We have also create a little test code.

We have generated the bundle.

We have deployed it to SMP.

We have verified that it works.

How to find the right bundle?

If you have the name of a package and want to know which bundle exposes it, then you can proceed as follows:

Go to the OSGi console

Type the command p followed by the name of the package

After pressing enter, the result printed on the console gives the name and ID of the exposing bundle and also lists the using bundles