Full disclaimer – much of this information reported below has not been verified and collected manually.  Still, I liked the Esri maps from Lumira and found some interesting things along the way. 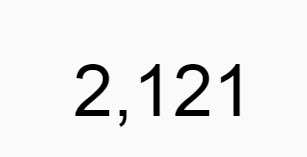 Over 2K people attended SAP Inside Tracks last year.  It started with Inside Track Rome, and ended on December 12th in Walldorf.

Which Inside Track 2015 had the most attendees? 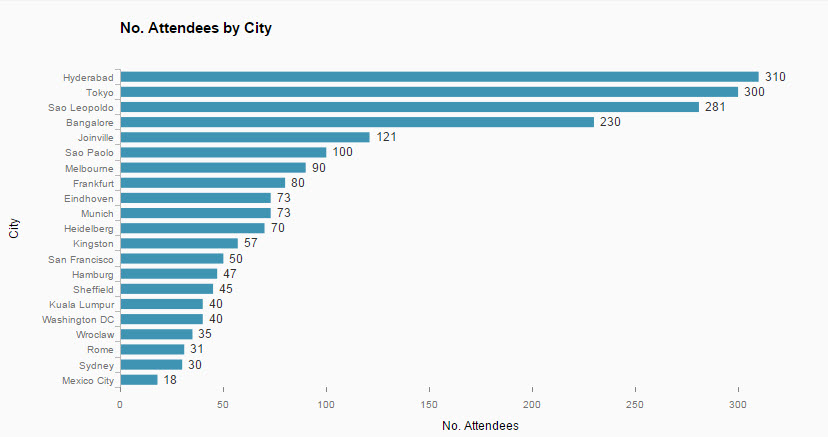 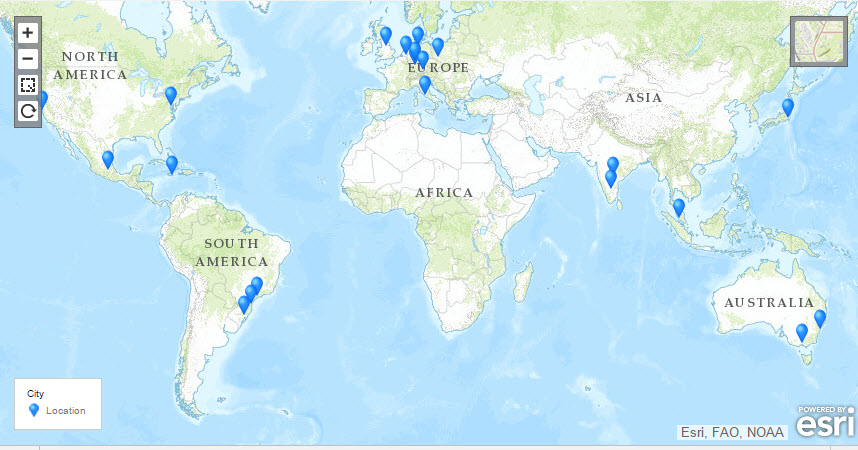 This is an Esri map of the cities where SAP Inside Tracks were held in 2015.  Note I had to change the city name for Walldorf to Heidelberg as the map software didn’t recognize Walldorf. 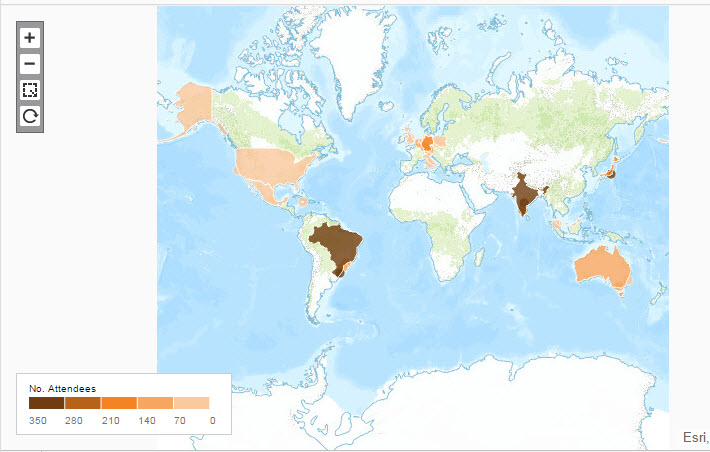 The is a map highlighting the number of attendees by city/country.  India, Brazil, Tokyo are in darker colors as they had high attendance. 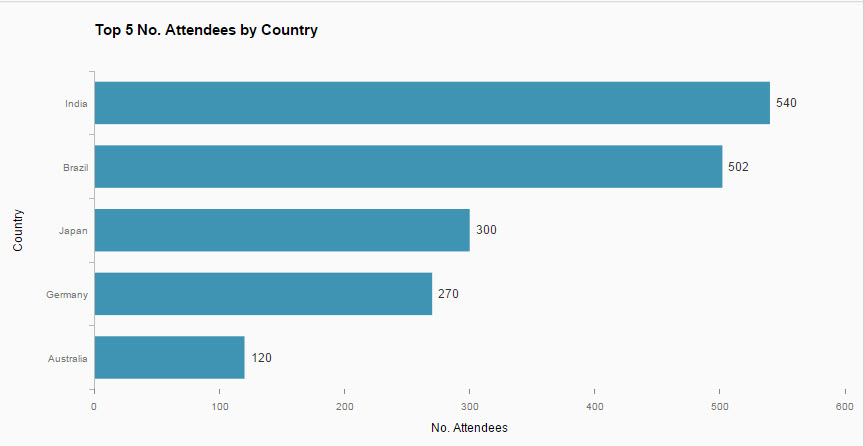 Top 5 attendees by country.  India is the highest, and Germany, with 4 Inside Tracks this year, is #4.

Brazil is impressive with over 500 attendees. 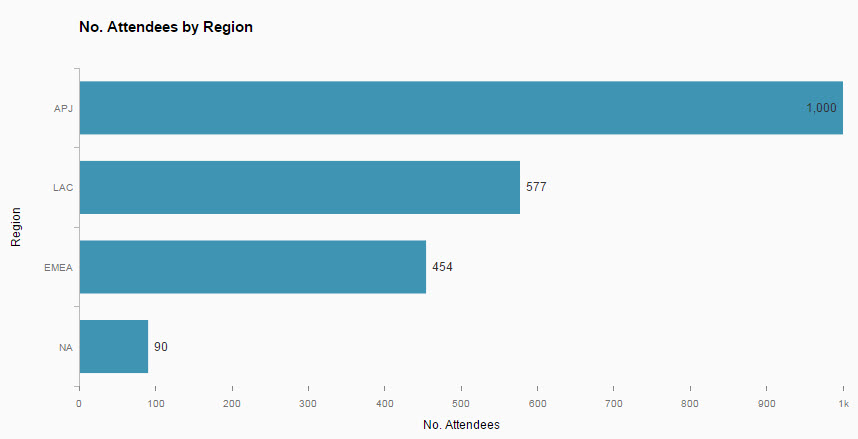 It is no surprise that the APJ had the highest number of attendees out of all the regions.

North America is the lowest, in my view, because there are several active local ASUG Chapter meetings held in North America. 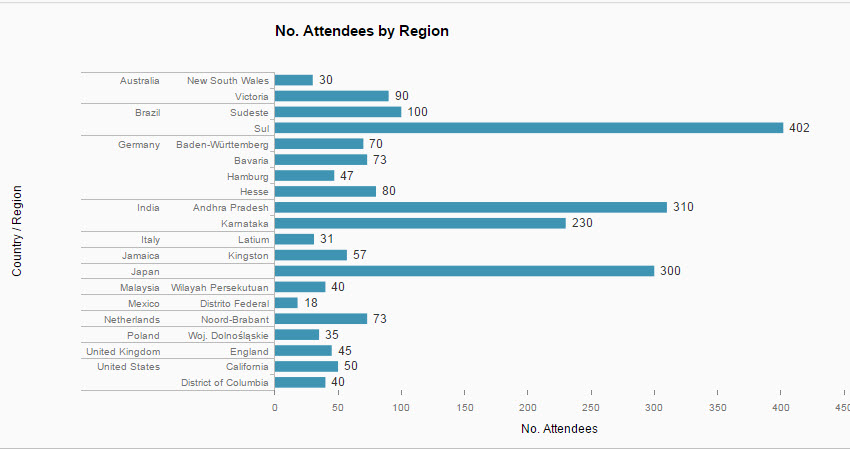 Here is what I find interesting with Lumira/ESRI.  My data only had city/country (not state).  When I created the geographic hierarchy, Lumira infers the state as the geographic region.

So Latium is the region where Rome is.  Looks like Japan doesn’t have geographic regions.

Sul is the South Region of Brazil, where Joinville is.

Hyderabad is one of the capitals of Andhra Pradesh

Maybe next I will try to blend the 2014 Inside Track data with this.

thank you for putting it together for the rest of us. just like with any statistics, i have been suprised in some and confirmed my conclusions in other cases. first, i didn't even know Tokyo had a SIT or that it was the second most popular one. is there public material that can be shared about it? i'm still mising NYC SIT, as that location should not be left out for whatever reason. that Germany is the most popular country for a SIT with most locations should be no surprise to anyone.

It is up to each Inside Track organizer to share materials.

As for New York, have you considered organizing an Inside Track there yourself?  In the past Derek Loranca did it and I helped with one of them, but we are not local to New York...New York City is one of my favorite places ever, and there is a nice SAP office there...just a hint...

Nice to see Brazil with so much participants. Brazil is a huge country and there is still space to grow.

Hi Tammy, Nice to see that so many SIT events took place in 2015 across globe and happy to see that Hyderabad SIT team topped the list in 2015. Congratulations to the entire team and expected to have many such events in 2016. regards, Ranga Davala.

Nice to see those numbers, specially those from Brazil and Japan - pretty amazing!

thanks for sharing this. As always, numbers depend on how they are counted 🙂

We had 3 SITs in Brazil in 2015: Sao Leopoldo, Joinville and Sao Paulo, but we also hosted several Meetups (those got started after I mentioned meetups as a "cheaper" alternative to a SIT in our Whatsapp group).

While we call them meetups, they are actual SITs, just more focused on a specific topic. Meetup RJ was planned to go 4 hours and in the end, it was almost 6 hours. Thats a full day event; and shows we have a timing problem 🙂

Including the Meetups, we had 698 attendees. 68 sessions given by 61 speakers. As a speaker does not count as an attendee, 759 people were at SITs & Meetups in Brazil in 2015. Of course those are not unique people, but still an impressive number.