Docker and SAP BI: How you can deploy SAP BI Platform on Docker

Docker is one of the coolest technologies that brought containers to the masses. From Development to Deployment, it has made the lives of many developers and admins easy. If you have not heard about Docker yet, you can check out the early posthttp://scn.sap.com/community/cloud/blog/2014/06/17/docker–containers-in-the-cloud. SAP HANA cloud platform already has mentions of Docker http://scn.sap.com/community/cloud/blog/2014/10/15/sap-hana-cloud-platform–setting-the-stage-part-2. In addition to that we will see how we can put Docker to use with SAP BI Platform.

Docker can be used in a different ways for SAP BI platform. You can dockerize the entire tier or just specific ones as per your requirement. The following are some of the ways you can deploy Docker in your SAP BI landscape and advantages of using them.

The entire BI Platform (web tier, processing tier and the database) can be installed on a single Docker image. This is similar to using a windows/Linux image and installing the SAP BI Platform on top of it. This is a very simple approach of using Docker for SAP BI Platform and is useful for testing out Docker or having a simple environment.

The split deployment is slightly advanced and makes use of the true features of Docker. You can do a split deployment on same system or on different system. You can split the different tiers into different Docker container each with different specs. All of these can still co-exist on the same working together. 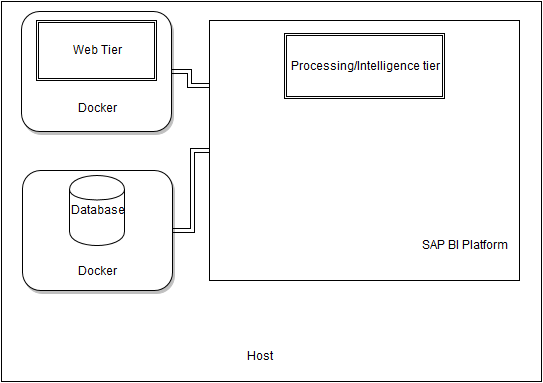 The advantage of having this type of setup is that you can have customized OS settings for different tier that does not conflict with each other. The Operating system for the Database can be tuned for it and your Web tier gets its own container space and memory.

You can extended the above split deployment into a distributed multi-node deployment. Since Docker are typically images that are run into containers. You can setup once and then run it easily on any host systems. An example of distributed deployment can be multiple web tier and platform services. 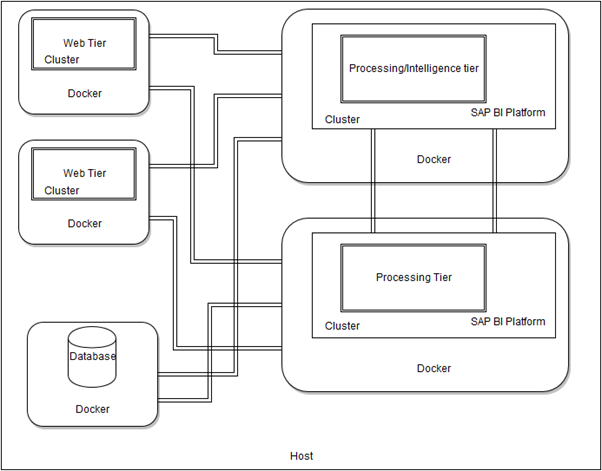 The BI Platform and the Web tier are both clustered at the application level and are installed on separate Docker containers. The applications communicate as they are on real hosts and individual services can be split across nodes.

This can be further extended into different hosts since Docker can be configured to communicate inter-host without any problems.

The above scenarios looks hard on diagrams, it’s relatively easy to deploy using Docker. It also adds other advantages like separate memory, operating system configuration and easy to replicate/deploy the same image on multiple systems with less configuration changes.

SAP BI Platform already supports Virtualization, Docker is the next generation to that and offers more powerful methods of deployment both on cloud and on premise and SAP BI Platform can make use of its power.

Thanks a lot Shankar..very useful information. can you please also share on 'How to deploy Business objects on Docker" step by step method or share if you have any code or document on this. Will be waiting for your reply as this is very helpful for me to get this information.

Please take a read at https://blogs.sap.com/2017/02/15/sap-bi-and-docker-installing-and-scaling-sap-businessobjects-with-docker/ which talks about the next part in the series. I will be covering more on the topic in the future.

Thanks Shankar! good one!!

Docker concept is good. Many People never thought Virtual Machine(VM) is capable for production environment in 90s?”. we know the current status of VM usage so we will see how long it takes for Docker.

Thanks Shankar for the quick guide. I am working on a SAP cloud product. Just wanted to know how do we leverage the capabilities of Docker for applications running on cloud where the hosting infrastructure is maintained by SAP itself. Since an additional layer ( Docker container ) would be added how does it help?

If you are running on their cloud and if you have access to their server. You can install Docker and run your containers in them along with the SAP Services. But i highly doubt if they would provide that and it is not also officially recommended anywhere.

You can check with your SAP Support team on the same.

did you ever installed or used public cloud (with dockerized) on PKS?

SAP stil does not support it!

Nope they don't. But you can use Docker compose or PKS to try. None of these are officially supported but good to experiment with.