How to Install SAP OpenUI5 on RASPBERRY PI

A few days ago I was checking my old hardware and I found a RASPBERRY PI (RPI) version 1 model B. It’s a very small computer module and this amazing hardware has two USB ports, 512MB of SDRAM, one Fast Ethernet (100 mpb/s), one HDMI, one RCA and a audio jack. In addition RPI requires an SD card to work as hard disk. It also has a small form factor measuring 65mm in length, it’s small as credit card and it works with a 5V/1.5A power supply. The processor is an ARM1176JZF-S with 700 MHz clock. 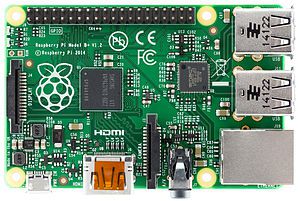 There are some operational systems available for this version of RPI, but I choose a version based in Debian called Raspbian, it is optimized for the Raspberry Pi hardware and  it is supported by Raspberry PI Foundation.

I was learning about SAP Fiori frontend, as well as, I was developing an internal site at home in order to support some activities that I judge important for me. For example, sometimes I need to wake up some machine, monitor the surveillance cams and get alerts from nobreaks. Therefore I chose SAPUI5, because I could learn and enjoy my RPI at same time.

Recently I’ve started thinking about Internet of Things (IoT) and how to implement it at home. I’ve realized that Raspberry is a good choice for that kind of development, especially after the last announced version of RPI, the RASPBERRY PI ZERO, it’s smallest than RASPBERRY PI versions 1 and 2, and it’s cheapest than both. If you are interested on RPI ZERO, take a look on my site.

Lets take a look how to configure RPI to run OpenUI5 with Debian Jessie. If you are planning to use the Debian Wheezy keep in your mind that the configuration is a little bit different and probably you’ll experience some troubles.

Take a look Installing operating system images – Raspberry Pi Documentation in order to install the RPI with Raspbian, it’s very simple and you can do it on Windows, Mac or Linux. Of course you need a SD Card. The steps for configuration described below are for Debian Jessie and you can experience some troubles if you are trying to configure with Debian Wheezy installed on RPI.

After you have installed your RPI, install the Apache Web Server. Do not forget, your RPI must be connect to the Internet by Cable or WI-FI.

On the terminal type the following command:

3 – Deploy OpenUI5 on RPI The root document configured for APACHE 2.4 is /var/www/html/Go to the web root and create the folder /ui5.Terminal commands:

If you don’t have a RPI yet, you can test my configuration at http://www.zdecoder.com/ui5/ , enjoy it.

In addition, the same configuration can be applied for Ubuntu 14.04 with Apache 2.4.

I try to have a guess on next steps...

RPI with 7 DSI Display ( official or not  Official Raspberry Pi DSI Display launch video - YouTube ) and a bunch of sensors,

Another path is to use Hana XS with UI5,

good luck and Nice to read you!!

Cool video, these kind of hardwares are really amazing, so I like a lot.

I think Android can be interesting, but I'm not sure if it  will work on RPI 1.

It can be compatible with RPI 2, so when you have some time take a look  at http://bit.ly/1OoLmwh.

I'm planning getting a RPI 2 in 2016 in order to have fun with these nerd toys.

Thanks for reading my post and sharing your ideas.

would be nice to build this into a docker container. maybe extend it to a full openui5/sapui5 development environment (nodejs, gulp, yarn, SDKs)