When running the SAP Fiori Reference Apps against a real backend you have two options: you can run them against the public available ES5 demo system or you use your own system.

In this guide I’ll show you how to use the ES5 system and what steps needs to be done if you use your own sytem.

Using your own system

The SAP Fiori Reference apps are based on the Enterprise Procurement Model service which is available in the every SAP NetWeaver system as well as the apps themselves.

When you want to run the SAP Fiori Reference apps agains a real backend you can use the SAP NetWeaver Gateway Demo system – called ES5.

We need to configure the access to the backend system in our SAP Cloud Platform Cockpit. Inside the neo-app.json file the backend is referenced as “RefAppsBackend”: 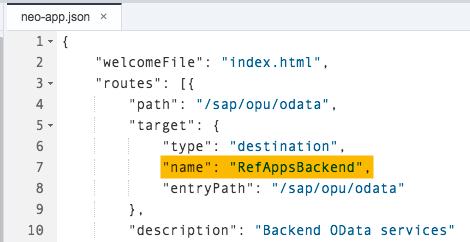 To configure the destination perform the following steps:

Maintain the following values for the destination:

Below you see a picture of the configuration:

3. Run the app against the ES5 backend

When you want to run one of the SAP Fiori Reference apps inside the SAP Web IDE against the ES5 backend and run the file flpSandbox.html/testOVP.html: 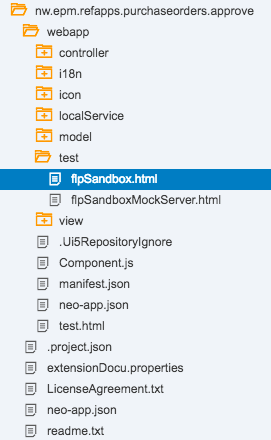 Using your own system

When you want to use your own system you need to have the SAP Cloud Connector up and running and configure the destination to your system inside the SAP Cloud Platform like in step 2 for the ES5 system and provide the appropriate connection data.

Setting up the SAP Cloud Connector is not part of this blog post, you can find more information here:

Preparing your own system

To set up your SAP system you need at least SAP_BASIS 751 SP02 to use it as your backend system for the SAP Fiori Reference Apps. You need to do to the following – please make sure you have the rights to do this or talk with your system admin:

After you finished these configuration steps your are able to run the SAP Fiori Reference Apps against your backend.

Hi Martin, very useful blog. I tried to run a Reference App, the shopping app pointing to my backend ERP system, but I get an exception at oData service level, saying that the database query is not supported. I guess it's because I don't use a HANA DB, I'm thinking to redefine the oData service implementation methods. Have you faced with this issue? Thank you. Diego.

what is the version of your backend system? If you use NW 7.40 you need a HANA DB for shop and for manage products. You might want to check out the approval app. This runs with any db.

Where can I download the role SAP_EPM_REF_APPS_BASIC_AUTH from? The link in the blog doesn't work anymore.

Still not able to locate SAP_EPM_REF_APPS_BASIC_AUTH, seemingly only available via SAP releases. Anyone got any more info on finding this role as an independent object?