How to log/track filters used within a Bex query.

The requirement is to log/track/record all  information related to the use of a specific Bex query ; the reason is that the query points to very sensitive data.

The access to the data is of course protected by specific rights but the customer wants to be able to determine who access the data, when and also what filters were used. This last information (filters) is not available from standard BW statistics content. Another approach could be to activate logs for that query but it appeared too much complex.

Install a query tracker through the use of a BEX Customer exit. The customer exit records the data to a ‘Z’ table each time the query is launched.

a) Create 2 variables on each filter to be tracked

The first variable is the user selection (common multiple selection in our case) ; the second one is the tracker.

The settings of the second variable are: 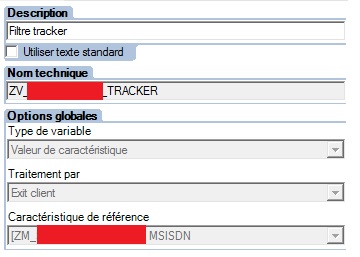 That could also be a DSO, but I went for a simple table.

The i_step 2 is reached AFTER the filter selection by the user, so it is possible to use the selection recorded by the first variable (ZV_**********_MULT_SEL).

The Z-table contains all selections made against this query.

Nice little solution for this requirement and clearly explained!