If you use Remote Role Assignment (RRA) in a federated portal network (FPN), and have encountered some performance or availability issues on the consumer portal whenever the producer portal is down, the following information is relevant for you.

When using Federated Portal Network in the SAP Enterprise Portal, one of the considerations that need to be addressed is the availability of the producer portal.

Performance regression on FPN consumer portal when producer portal is not available:

An SAP NetWeaver [enterprise portal] consumer can become unresponsive when any of its registered producer portals are either unavailable or not responsive. When planning to shut down or restart a portal that functions as a producer for any other consumer portal, you must first block the connection to the producer portal from its respective consumer portals using the FPN administration UIs.

It is expected that the producer portal is up and running at all times, because unexpected downtime or lack of proper planning from the FPN perspective can damage the consumer portal functionality.

To overcome these issues, there are several options, described below.

In case of a planned downtime of the producer portal, it is recommended to block access to the producer in advance. It can be done easily using the UI under System Administration -> Federated Portal.

For SAP Enterprise Portal 7.3 and above, under “Manage My FPN Connections”, you can prevent/allow access to connections (as consumer or as producer):

In addition, for newly-created FPN connections, you can control access to and from your system via the “Connection Options” tab under the Control Panel.

You can read more about it in the following documentation:

If you haven’t upgraded yet to 7.3 or above and still using the legacy SAP Enterprise Portal 7.0 versions, you can control the access to the Producer portals under “View My Producers”:

Take into consideration the following facts:

It is highly recommended to upgrade to a newer version, such as 7.4 / 7.5.
Refer to Everything you wanted to know about SAP Enterprise Portal Upgrade

To check for the relevant SPs where it was added, refer to SAP Note 1718291 – “Consumer Portal availability when producer Portal is down”.

With this new configuration, you can control the timeout interval of SOAP calls to the producer portal. Once such a timeout occurs, the mechanism blocks that producer portal. You can also configure the length of time this producer will be blocked.

In addition, there are two approaches in case such a call gets a timeout after the defined interval – blocking for all users, and blocking only the users who encounter the issue.

Following is the information quoted from the note:

First, decrease the timeout value for the remote call (The default is 3 minutes):
Go to NWA on the consumer portal:
Configuration -> Infrastructure -> Application Modules.
Look for ‘com.sap.portal.ivs.global.bridge’ and in the ‘web module details’ select ‘SenderBridge’.
Set the ‘SOAPCallTimeout’ parameter for a desired time. The recommended value is 30 seconds. The value for this parameter is in milliseconds so for 30 seconds you should put 30000.
Save the changes and restart the service/application in order to apply the changes. 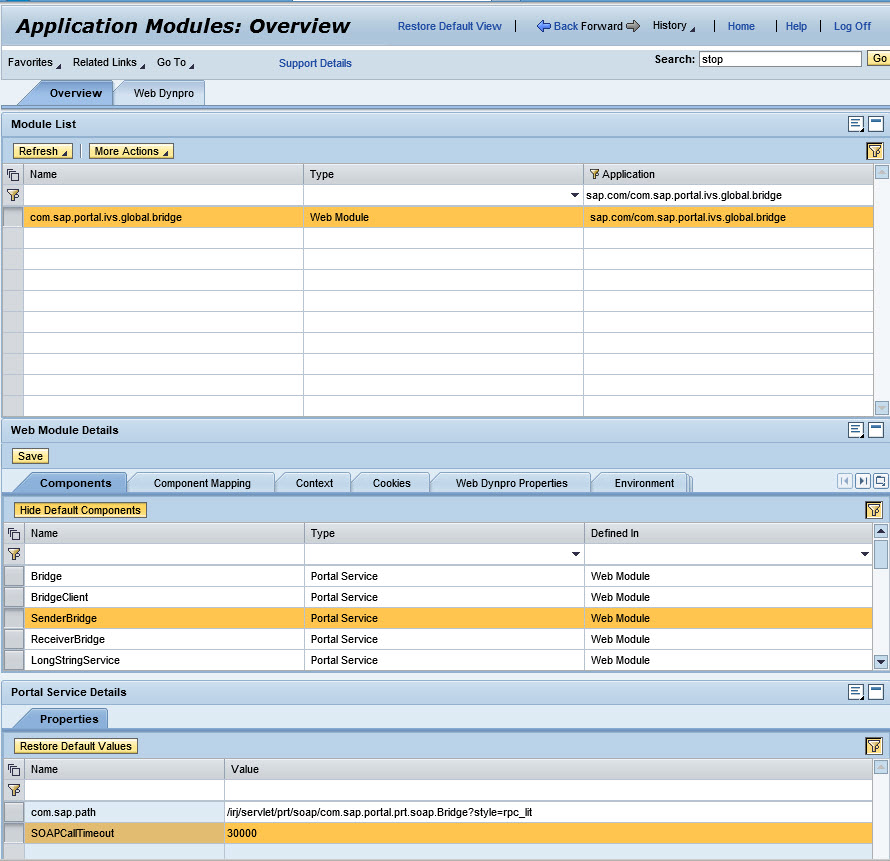 Secondly, in the ‘web module details’ select ‘SecuritySessionManager’.
This service has a parameter which determines the behavior of the consumer in this case.
There are 2 approaches for solutions from which you can choose:

Approach 1 – blocking for all users:
If you would like to prevent every user from suffering the long login time process, due to a producer down time, you should configure the ‘blockAllUsersOnError’ parameter to ‘all’.
In this case, whenever the first user encounters a timeout event for the remote call, all other users who will log in in the future will not trigger a remote call and the login process will be normal.
The administrator can unblock the problematic producer portal by navigating to the Federated Portal Iview, -> System Administration -> select the connection with this producer portal -> connection -> allow access to remote content.
In addition, the parameter ‘BlockingInterval’ of the ‘SecuritySessionManager’ service, determines for how long this producer will be blocked.
*** This configuration is recommended when there is a problem with the producer portal and it is crashing and not running. [It should be set before the crash 🙂 ]

Approach 2 – blocking only user who encounters the issue:
Set the ‘blockAllUsersOnError’ parameter to ‘user’ and save.
This configuration will prevent the current user’s session from triggering a remote call to the producer that caused the timeout and it will remain blocked until the user logs out of the consumer portal and logs in again. After you set the parameters, click on ‘More Actions’ -> View Corresponding to Application.
Stop and Start both services ‘SecuritySessionManager’ and ‘SenderBridge’ on all instances.

In a case where the consumer portal is not available at all, it might be that all threads are taken by the SOAP calls. The available steps:

Thank you for this very interesting blog !

Just a question: in Enterprise Portal 7.4 SR1, a third property named openBrigdeSupport (its value is set to false by default) is available in the component SenderBrigde. Do I have to set this property to true in order to activate the functionality you describe in your blog ?

Thanks for the feedback 🙂

Regarding openBrigdeSupport - Do not change this property value. Please leave it as "false".

This property was used for support purposes, and it was removed in later SPs.

If you will update your portal to a later SP, you will find that this property is gone 🙂 .

Thank you for your quick reply 🙂 .

Very interesting and usefull! Thanks!