How to Work with Hierarchies

It seems that everybody understand hierarchies but it is sometimes difficult to handle them, be it

This document want to shed some light on these tasks. 😀

Let’s first spent some words on “What is a Hierarchy”

Hierarchy as a Tree in Graph Theory

We will focus here on those special hierarchies in which the vertices have one or zero parents and one or many children which in turn are called Tree.

Second no cycles are permitted. Therefore following the Parent relationship we will reach some vertex without a parent which we will call Root. If we follow the Children relationship to the vertices without children these are the Leaves.

All vertices which can be reached starting from the Root vertex via the Children relationship are belonging to the same Tree (= Hierarchy).

Defining a Tree Hierarchy in BODL

Of course the vertexes are the nodes and the relationships are the associations. 😀

There are two different ways to implement such a Tree Hierarchy:

For the sake of convenience we will work with the second approach here.

So here’s the BODL for the Tree hierarchy: 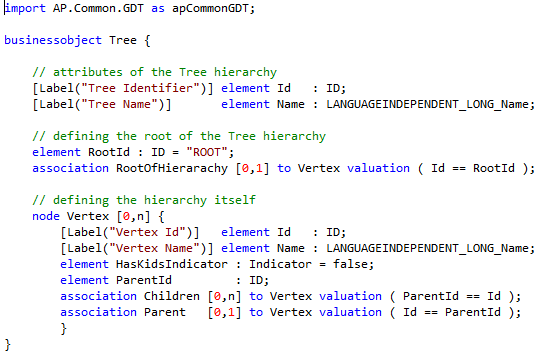 At the Root node of the Business Object we define some information about the root of Tree hierarchy like the association which can be used later as the entry point for traversing the hierarchy.

The node Vertex defines the hierarchy itself:

First you define the list of the Vertex node instances via an AdvancedListPane, but you add the “HierarchicalExtension” to this list 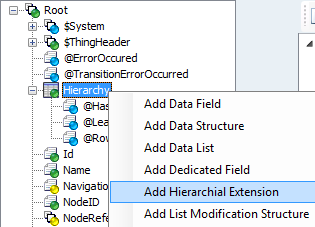 Second you need to define the bindings for this special structure 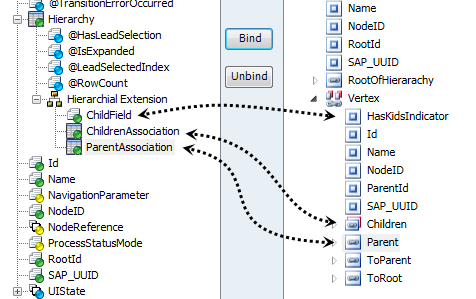 This is the result if there are already some vertices maintained. You notice the triangles which tells you that this vertex has children and if the children are visible. Technically spoken: The vertex is collapsed or expanded.
The vertex has no children if there is only a square shown. 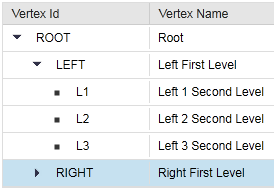 You should not show the technical fields like “HasKidsIndicator” or “ParentId”, because this information is already shown via the graphics.

It may be useful not only to expand or collapse the current vertex by clicking on the triangle but to show or hide the complete hierarchy. This can be achieved by some EventHandlers with List operations, for example “ExpandAll”. 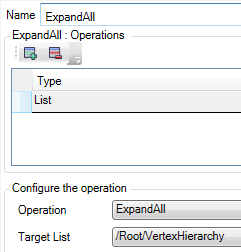 Adding an vertex is best done via a modification structure in own pop-up and not inside the hierarchical list.

Please use a data operation before starting the modifications structure which sets the current node as the new parent. 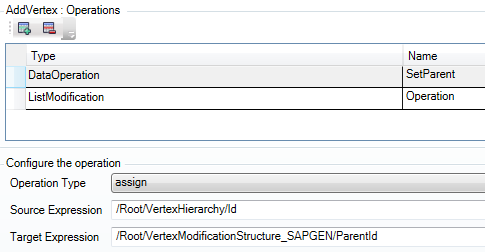 This will prevent such issues like more than one Root vertex.

If you would simple delete the current row, then exact only this would happen. As consequence all children of the current row would lose their parent.

So you need to ensure that on the deletion of a vertex all children (and the children of the children and so on) are deleted too.

This can easily achieved with a small action:

So add the line

to your BO definition and add this ABSL coding:

Which will delete in a recursive call (depth-first approach) the children and finally the current vertex.

If you want to re-arrange the hierarchy some precautionary measures should be taken:

The best way to ensure the later topic is to allow the user to select the new parent from a dropdown listbox. Just define a second list in the data model VertexList which is also bound to the Vertex node

Create a “NewParentId” element which is typed as a Code and bind the code list to this new VertexList using the ID and the Name. I’ve added an EventHandler to “OnValueChanged” which updates the ParentId of the current selected line and does a Refresh on the VertexHierarchy.

Sadly, this worked for me only in HTML5.

Now you should be able to create and modify hierarchies.