Whether used to make real time decisions, or if the “Big Data” they generate is “sliced and diced” later to tweak production or business processes and decisions, companies throughout the steel supply chain have been increasingly benefiting from their use of the newest inline analysis systems throughout their operations.

While the steel industry has already made huge progress in such areas as quality and efficiencies, there is still room for it to improve further, Maillard said, maintaining that process improvement though inline analysis systems is one of the easiest areas to demonstrate efficiency improvements like yield loss reduction and energy savings. “These inline analysis systems can directly reduce yield loss by increasing quality and production rates,” he said.

This is particularly crucial in today’s challenging business environment. “Knowledge is power,” Mike Falk, chief executive officer and president of Falk PLI Engineering & Surveying, Portage, Ind., said, quoting an old adage. “It comes down to a need of to change or to die,” especially when competing with China and global companies that often have lower wages and newer equipment.

It is hard to generalize about the way they give steel companies this kind of competitive edge, given that the inline monitoring and analysis systems vary greatly company by company, and by the various steelmaking and processing operations they are used for.

“They can be as simple as an X-ray thickness detector or a shape detection system or as complex as vibration sensors or automated surface inspection systems,” Nancy Hake, project manager, metals industry, at Falk PLI, said.

Falk said that fitting with the Big Data explosion that has been moving in lockstep with Moore’s Law about increasing computing power, the steel industry will continue to generate more and more data every year. “So how do you take that blur of data that has been collected and make sense out of it? Oddly, you throw more data at it in an effort to try to look for patterns in a cause and effect type of relationship,” he noted.

The general goals of analyzing the data that is being generated, either in “real time” or at a later time, however, are fairly universal. Stefan Koch, the metals industry lead for the industry business unit of SAP SE, Walldorf, Germany, says some of the benefits that the steel companies are looking to achieve include cutting costs, increasing product quality, lowering scrap metal generation, providing better customer service and providing information to allow the company to improve its production and business processes. 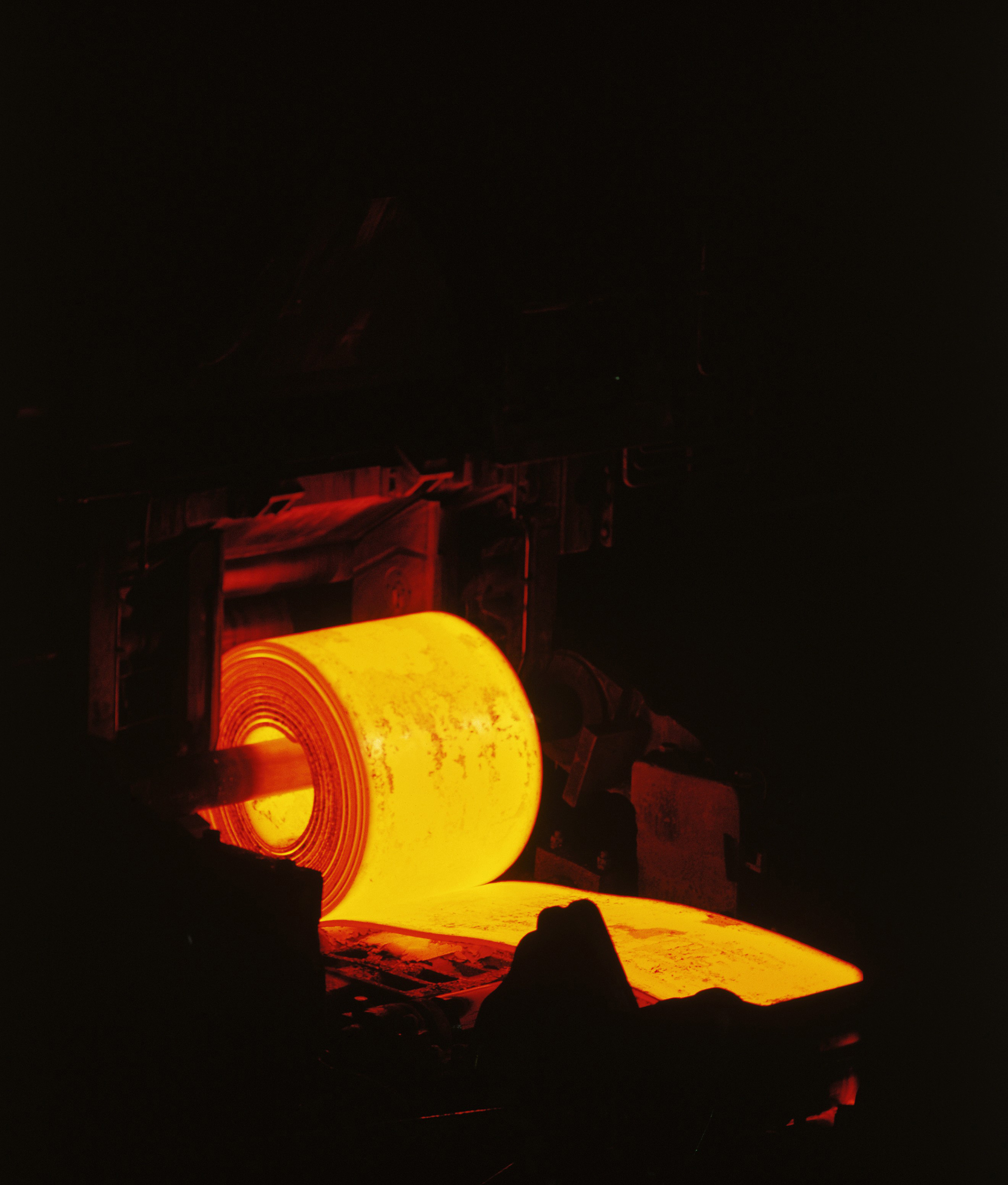 Avoiding, reducing or eliminating claims is also very high on the list of what steel companies would like to achieve through their use of inline analysis, especially with their customers pushing them to provide increased quality products as well as, in the case of systems, according to Greg Gutmann, account manager, metals, for ISRA Surface Vision Inc., Duluth, Ga.

“With these systems, quality control can be achieved without compromising cost optimization efforts,” Maillard said, adding that process control is the key lever for mastering product quality in a sustainable and cost-effective manner. “Such systems enable almost real-time control of the process from a quality standpoint, making it possible to quickly grade and reallocate the products, if necessary.” He said the benefits also provide for longer-term process optimization in a “through-process” approach, which includes the influence of upstream operations upon downstream operations, as well as a global optimization process route.

Inline analyzing systems are not only used to enhance the surface quality of the steel but to control efficiently the resource consumption in the steelmaking and steel processing process, Rebecca Dettloff, marketing manager for Germany’s SensoTech GmbH and U.S.-based SensoTech Inc., pointed out.

She noted that one major use for inline sensors is to ensure that, for example, in a pickling line there isn’t too much or too little acid in the pickling bath. Similarly, analyzers installed at cold rolling are useful in measuring the concentration of rolling emulsions.

In addition to having a positive impact upon product quality, steelmakers can achieve cost savings from such inline analysis, Dettloff noted. This is not just because without such analysis companies might use greater quantities of these raw materials than they actually need, but they also save the cost of having to take samples and do laboratory analysis to ensure that they are using optimum concentrations in their steelmaking processes.

Furthermore, delayed laboratory results deviating from the optimum reference value might lead to failed productions, because countermeasures could not be taken on time.

Inline monitoring’s role in root cause analysis, which Koch describes as CSI for steel plants, is also seen as being very advantageous, as it allows a company to track and trace everything that has occurred in the steel production or steel processing process to detect the root cause of a defect.

There is a reason that root cause analysis has become somewhat of a buzzword in the steel industry, Falk PLI’s Hake pointed out, explaining that the data collected by inline sensors can help companies to get beyond the symptoms of defects, allowing them to put it all together and find the root cause of the issue. Additionally, it helps them identify what they need to do to correct that problem, so they produce or process products as quickly as possible.

“There are many steps in the production process, so you really need to track and trace everything to really know what it was that caused the defect,” Koch said.

Even if the defect is discovered during a downstream operation, ISRA’s Gutmann said that you have to look at the entire steelmaking process, all the way to the casting of the slab. “The defects, for example, in the slab might not become apparent until it goes through the rolling mill or even further downstream through other processes such as pickling or coating,” he said.

“However, those early defects could provide a flaw in that material that makes it necessary to downgrade it from a primary to a secondary grade or could even make it necessary to be scrapped,” Gutmann said. “The sooner that a producer can identify these defects, the earlier they can either take steps to correct it or eliminate that portion from further processing.”

The data generated by the inline monitoring system could be complemented with additional forms of data collection. Hake explained that if, for example, an automated surface inspection system finds a defect on the edge of the strip it could lead the producer to suspect that they might have an alignment problem somewhere in the rolling process. So during the company’s downtime, perhaps during a maintenance outage, they could ask a company, such as Falk PLI, to come in. They could do some additional “hard measurements” using their three-dimensional laser measurement technology to further point them into the right direction as far as the root cause of the problem, and what they need to do to correct it. “Once you find the root cause, you want to take steps to eliminate it,” she explains.

Not all analysis of the data generated by inline systems, however, is done post production. In fact, Gutmann maintains that with the speed of computer processing getting faster and faster, real time analysis is getting better and better.

He notes that in the case of inline laser inspection, which uses laser light to create a three-dimensional image to measure and report the depth of any defects present in the steel, such analysis is increasingly being able to occur at line speeds as the strip is being rolled.

Being able to use special software to analyze Big Data is real time, while the strip is still running on the machine, is a very significant development, SAP’s Koch said, as it could allow the equipment operator to make changes online in real time. “This could be very challenging as the steelmaking lines are running very fast,” he admitted. “Operators don’t have much time to correct the machine settings.”

However, with the software mapping the defects in the strip, giving the operators better indications of exactly where the defects fall, what type of defects they are and how large or deep they are, Gutmann said that it at least gives them better guidance as to whether to stop the line and/or reject the coil immediately.

In addition, given that the monitoring system also captures video recordings with complete images of both the top side and the bottom side of the strip or coil as it is being processed, the operator is able to give it a quick review before the coil is removed from the line and the next coil is being loaded to decide whether or not he coil should be shipped to the customer.

Gutmann explained that a summary report is generated that tells the inspector the number and location of all the scratches, dents, pits and other defects. After, he or she can make a determination based on the customer’s requirements. If a customer has stated that they would accept anything but edge cracks and no edge cracks were found, the inspector could release the coil for shipment. “However, if other defects have been identified, he might want to go back and review those first.”

Inline monitoring systems could also have positive implications that go beyond production and processing operations. SAP’s Koch says that there has been a big push currently to take some of the Big Data generated on the technical side, such as from inline monitoring systems, and to “slice and dice” it along with data generated through certain of the company’s business systems to see if they could be interrelated, which, he said, is often the case.

“The line between business processes and manufacturing processes ae blurring and becoming one,” Koch says, as could be seen by the concept behind of “The Internet of Things,” which includes that by delivering real-time data from the manufacturing end of the business, it also has a direct impact upon delivery performance and other business functions. “Everything is being interrelated into one digital model,” he maintained.

Likewise, data from inline monitoring systems and other forms of manufacturing data collection are interconnected with the condition of the equipment used to produce and process steel, aluminum and other metals. “While we don’t sell X-ray systems, photo systems or other kinds of monitoring systems, we often challenge our clients to consider that not all production equipment was properly machined or properly installed, and that over time it could have become worn or it could have moved or otherwise been changed,” Falk explained. “Everything in the world wears and moves and nothing moves quite the way you expect.”

Falk says the key is to take the data generated from inline monitoring systems with that generated from downtime analysis systems used to check the condition and alignment of the equipment that is used in the steel production. “By having a better understanding of what is happening with their equipment, steel companies are better able to make decisions that could result in such benefits in such things as improved yield, improved quality and improved productivity.”

“The future of inline analysis systems seems to be limitless at this time,” Primetals Technologies’ Maillard said. “The performance of inline inspection systems will continue to improve as these systems become more intelligent and autonomous, enabling steel companies to have even more reliable, real-time process control and optimization.”

At the same time the costs of the equipment are coming down, Koch observed. He said this is improving the business case for companies to utilize the latest technologies to collect and analyze inline-generated Big Data.