Bernd Keller just celebrated his 25 year anniversary at SAP. In 1990, he was interviewed by SAP´s former CEO and co-founder, Dietmar Hopp. Bernd now works as a Regional Head of Solution Management in the Industry Business Unit Utilities.

Read about his interesting journey and how his hobby as a player in a soccer team helped him to get his first job as a graduate student.

How did you come to SAP?

In 1990, after completing my diploma in Computer Science at the University of Kaiserslautern, I was hunting for a job in various companies and branches. The most interesting job offer came first from Deutsche Boerse AG, back then a newly founded company that was developing and managing the German stock exchange. SAP was very late in replying to my job application, and I already had all other offers on the table. However, I have to admit, they made an impressive turnaround, since SAP invited me to a job interview with the former CEO and co-founder of SAP, Dietmar Hopp. During the interview we also talked about me parachuting and playing soccer. Back then, I was not aware of his passion for sports, specifically soccer, so I am sure it helped convince this executive to hire a fresh student straight from university. It was only later that I learned that playing a team sport and thus being a team player was and still is an important skill for employment at SAP.

What have you experienced during your 25 years at SAP?

I can barely believe that this interview with Dietmar Hopp was more than 25 years ago. I am now in my 26th year with SAP and it has been an unbelievable and most interesting journey for me. Growing up with a company from 1,800 employees in 1990 (I was employee 1805, which is still reflected in my employee ID) to now more than 75,000 employees was and still is an incredible experience. Not knowing what to expect after just finishing a diploma thesis on artificial intelligence, the reality of the business world caught up with me, since artificial intelligence was not a topic for many years to come.

So I started with SAP’s first industry-focused development team, developing the first billing solution for Utilities on the SAP R/2 platform. The solution was called RIVA and was later developed as IS-U on SAP R/3. Working at SAP as a software developer in the early 90s required a tremendous skill set, since we covered the complete lifecycle of a software solution: From rolling in the requirements via customer workshops, through development, roll-out, demo, maintenance and support. It also often included consulting and training.

SAP has very much changed since then. Nowadays we talk about ‘job enrichment’. We didn’t need that, nor did we even know the term back then. Don’t get me wrong, changes at SAP were inevitable. Can you imagine that in 1990 we were still sending software fixes to customers as program texts via fax? There were no cell phones, no internet, no… SAP had to reinvent itself a couple of times over the last 25 years to adapt and stay relevant to their customers as well as to the market.

So during my career, or let’s rather say my incredible journey with SAP, I was able to experience many different tasks and different roles including Developer, Project Manager, Key Account Manager, Regional Industry Group Manager, Solution Manager and now Regional Head of Solution Management.

Working on such a variety of tasks in an international environment like SAP, it’s just normal to get to know so many different people and cultures and to learn how we can complement and learn from each other. For me, the diversity at SAP is a role model for any society. So it’s no surprise that I was even able to move to the U.S. twice and also to return twice. Working in a foreign country like the U.S. for more than 8 years was probably the most exciting time for me, as well as for my family. And experiencing such a move twice made it even more intense and created so many great memories that I will have for the rest of my life.

Why did you move to the U.S. and why did you return?

Being in my early thirties in 1996, I had the opportunity to take on a 2-year assignment in our first office in Silicon Valley (Foster City, California), which later moved to Palo Alto. I had never visited the U.S. before, so I only had second-hand knowledge of this country. The decision to move was made last minute over the course of a weekend together with my wife. First it was an adventure and an interesting job offer, but later California became our second home. With three of my colleagues, we were the first SAP Utilities experts in the U.S. and our task was to create and grow our utilities business in North and South America. Now, with some pride, I would say we were quite successful. The two years planned for the first assignment ended up being prolonged to five years staying in the U.S.

Several years later in 2003, I received another offer to lead a team of Utilities Experts, again in Palo Alto, California. This assignment lasted for another 3.5 years.

I often get asked the question: ‘Why did you return to Germany?’ It’s often assumed that I did not like the country or the job. On the contrary, I loved the American lifestyle, the job, the country and the people. The problem arises, when you like both sides: Germany and the U.S. You find good and bad things on both sides, and of course the family had a huge impact on the decision. Whenever you go through such an experience, you realize that you will never be the same again. It has such a tremendous impact on you that lasts a lifetime.

Deciding for Germany did not mean my family and I had closed the book on California. My son was born in the U.S. and he has American citizenship. We also often spend our vacation in California and call it our second home.

How do you compare living in the U.S. with living in Germany?

Comparing Germany with the U.S. is almost impossible to describe in a few sentences. Maybe I’ll write a book about my experiences once I have retired.

I grew up in a small village in rural Saarland and then moved to the bustling, high traffic, metropolitan area of the San Francisco Bay Area. What a difference – like night and day. Nevertheless, I discovered that it’s key to adapt to your environment wherever you live. Does this sound familiar? It’s the same in business.
So we went to baseball games instead of soccer games, we went to pumpkin patches rather than Christmas Markets, paid by credit card instead of cash, and most importantly we drove the car to the next shop, even when it was just a few yards, rather than walking.

What has been the biggest change in the industry?

Even though in many markets, deregulation of the Utilities business has already advanced, there is always some kind of regulation authority defining the market rules. Sometimes this could end up being a driver, at other times it could be a reason for stagnancy. Looking at the Utilities business from a worldwide perspective, there are several regions developing in different stages. Some regions have developed a very mature, competitive market environment, while others have developed the smart meter business to drive energy efficiency. Other markets just cannot build their infrastructure fast enough to cope with the growing need for energy.

Looking back to the past, I believe there are a couple of major highlights that had tremendous impact on a majority of the markets: deregulation, environmental legislation and decentralization of power production, and the introduction of smart meters and the smart grid.

Where do you think the industry is going and how can SAP help the utility industry over the next 25 years?

At SAP we are working very closely with our customers. For example, we have a customer advisory council where we regularly meet our customers to discuss their view of the markets and their need for SAP solutions now and in the future. When asked about the future utility business, many of the leaders are very cautious in providing a confident prediction about their own future or the future utilities market. Again, the Utilities business is still dominated by regulations and these can change in a minute when catastrophes like the one in Fukushima happen.

With that, I believe it is probably much easier to predict technology-driven aspects of the industry. SAP is at the forefront of many technological innovations. For example, through the establishment of in-memory computing in IT systems, real-time information is already helping to transform many business processes. Also, assets are becoming digital assets in a connected world, called the Internet of Things. SAP is already addressing this topic with its Hana Cloud Platform (HCP), where massive amounts of data can be managed and analyzed.

In addition, just re-imagine new business models in the future. Cars will not be sold anymore, but car manufacturers will sell mobility instead. In the same way, a manufacturer will sell uptime of assets instead of the assets themselves. This will only be possible with the right technology to connect manufacturer and asset operator. SAP is already working on such business networks to support these kinds of new ideas.

Another example for a new business model is the ability to simply set up a new utility business anywhere, without being a utility or owning any utility infrastructure. Compare this to UBER creating the world’s largest taxi company without owning any taxis. A company in Germany has already established a Virtual Power Plant business gathering distributed power production capacity on a virtual platform, and it has already reached the size of some conventional power plants.

If regulators allow the digitalization of the industry to continue, it will disrupt existing business models and define new models. SAP has developed a white paper for the ‘Digital Utility’ addressing various aspects of the trends and changes and how they affect the current business models. 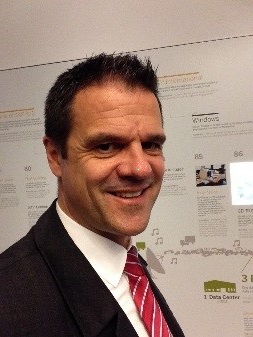 All the best for another 25 years.

Congrats Bernd and lots of interesting info in your interview.

25 years ago developing RIVA, now helping Riva Modeling (just the name is similar) to get recognition in SAP.... Thank you and Congratulations

Congratulations, Bernd, and thanks for sharing some interesting infos and insights.

i want to thank you for all you have done so far for our customer, colleagues and SAP. You helped to manage several transitions in the Utility industry. The next one will be the Digital Utility and we need your detailed process and customer knowlege to remain the market leader. Again, thank you and stay healthy. It is a great pleasure working with you and have you as a leader at SAP.

congratulations and all the best for our continued change journey in the utilities industry!

Thank you for effective and fun cooperation in various relationships.